Standing inside the uppermost tower of Casa Loma, my breath is taken away, not by the view, but by the multitude of graffiti markings on every brick, announcing Toronto was here. The sheer patina of names massed on top of each other is astounding, and for this reason the earliest marking I can find is dated 1984.

"Darn, I was hoping this was the tower that wasn't enclosed," Ethan complains before continuing, "Oh, by the way, did you know I'm afraid of heights?"

I look down the first of many flights of stairs. Now he tells me.

Casa Loma is not for the feint of feet. There is a lot of walking, and although there are service elevators to several floors, there is no magic way of getting down from the top. If only I had fairy dust, I grumble.

As I mentioned in CityPass Toronto Part One: The ROM, I had recently purchased CityPass booklets to spend some time at several attractions in the city on the cheap, namely: the ROM, Casa Loma, the Ontario Science Centre, the AGO, the Toronto Zoo and the CN Tower.

As an attraction, Casa Loma can be a bit one note for the repeat visitor. Secret passage way -- check; underground tunnel to stables -- check. However, I am impressed with how the Kiwanis Club manages to make each season special. This season's event, Peter Pan's Fairy Tale Castle, makes the castle seem more enchanted than usual with singing Magical Fairies that the tots will love, the interactive Fairy's Magical Mirror, Santa Claus sitting in the Billiard Room, and several shows throughout the day. I have to confess Captain Hook's Neverland Cave is fairly cheesy (as in the Chuck-E-Cheese variety). 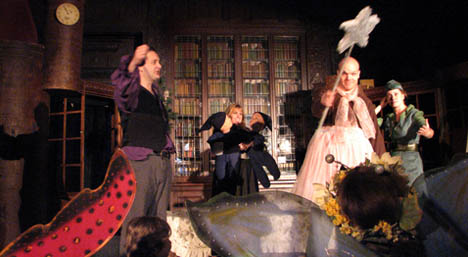 Audience members assist Men in Tights in their performance of Peter Pan.

I always enjoy whatever the comedic troupe Men in Tights are up to, and their current rendition of Peter Pan, played with the audience not simply for the audience, is just as much fun for the adults as for the kids ... yet a little less manly, perhaps, than previous occasions. Tickets to the show are a toonie for adults (a loonie for kids) on top of special event pricing ($12 for adults, $7.50 for seniors and youths, and $6.75 for kids) or entry with CityPass ticket.

Tomorrow I will continue with Part Three: the Ontario Science Centre.