It's inspired by somewhat similar unicorn-themed cafes around the world, though it's perhaps less elaborate. 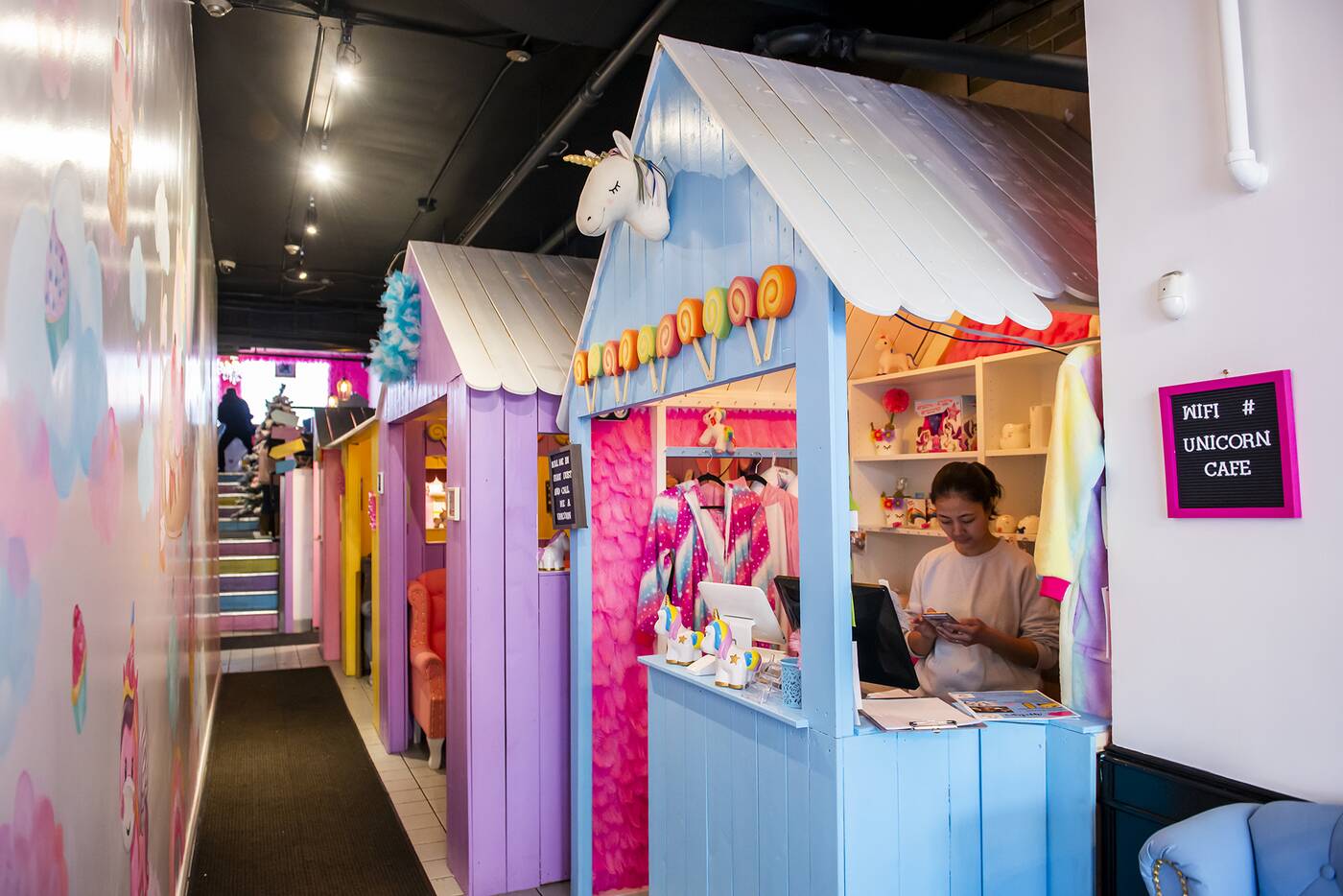 However, the decor is still one big splash of pastel blue and pink, and there are unicorn murals on the walls. 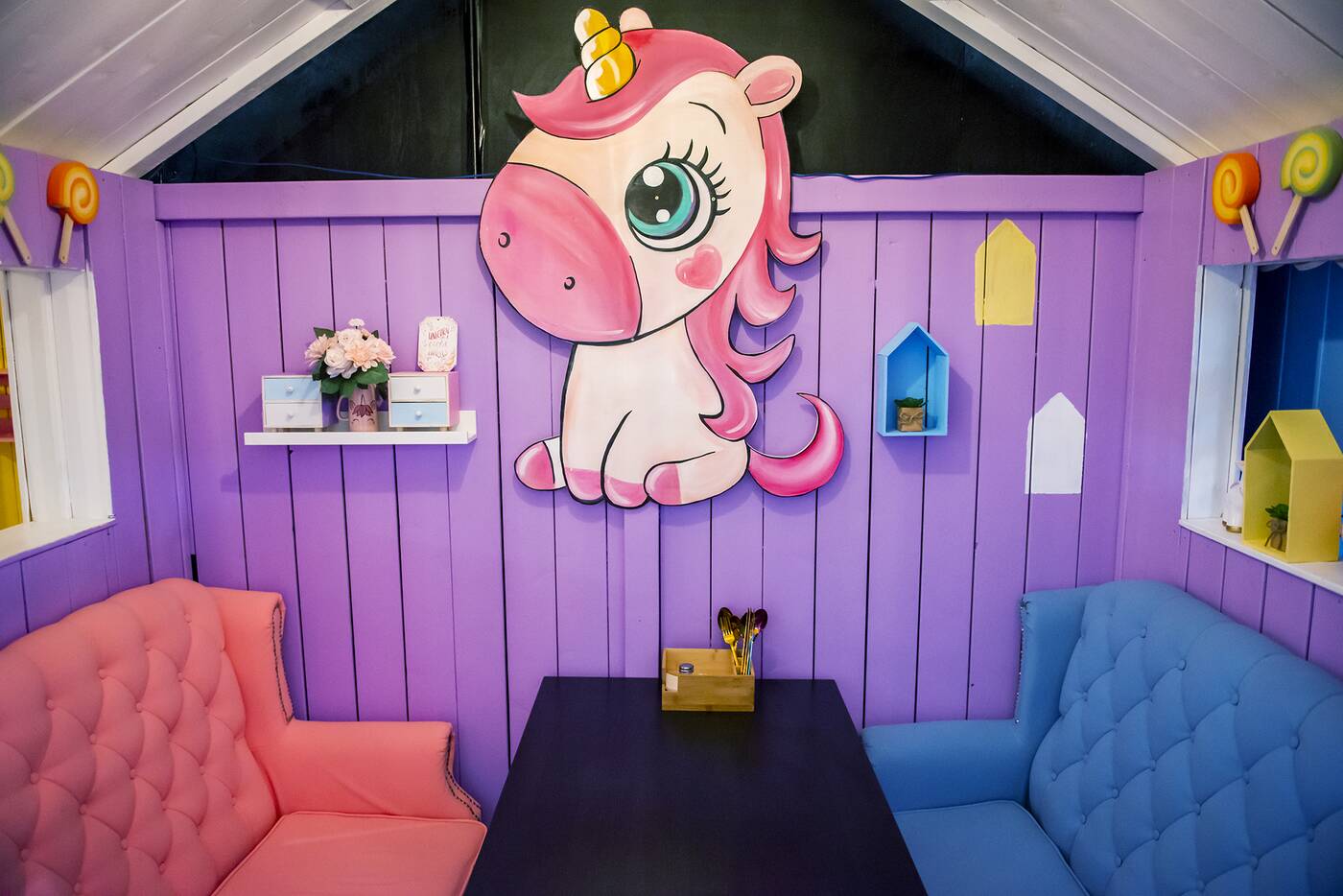 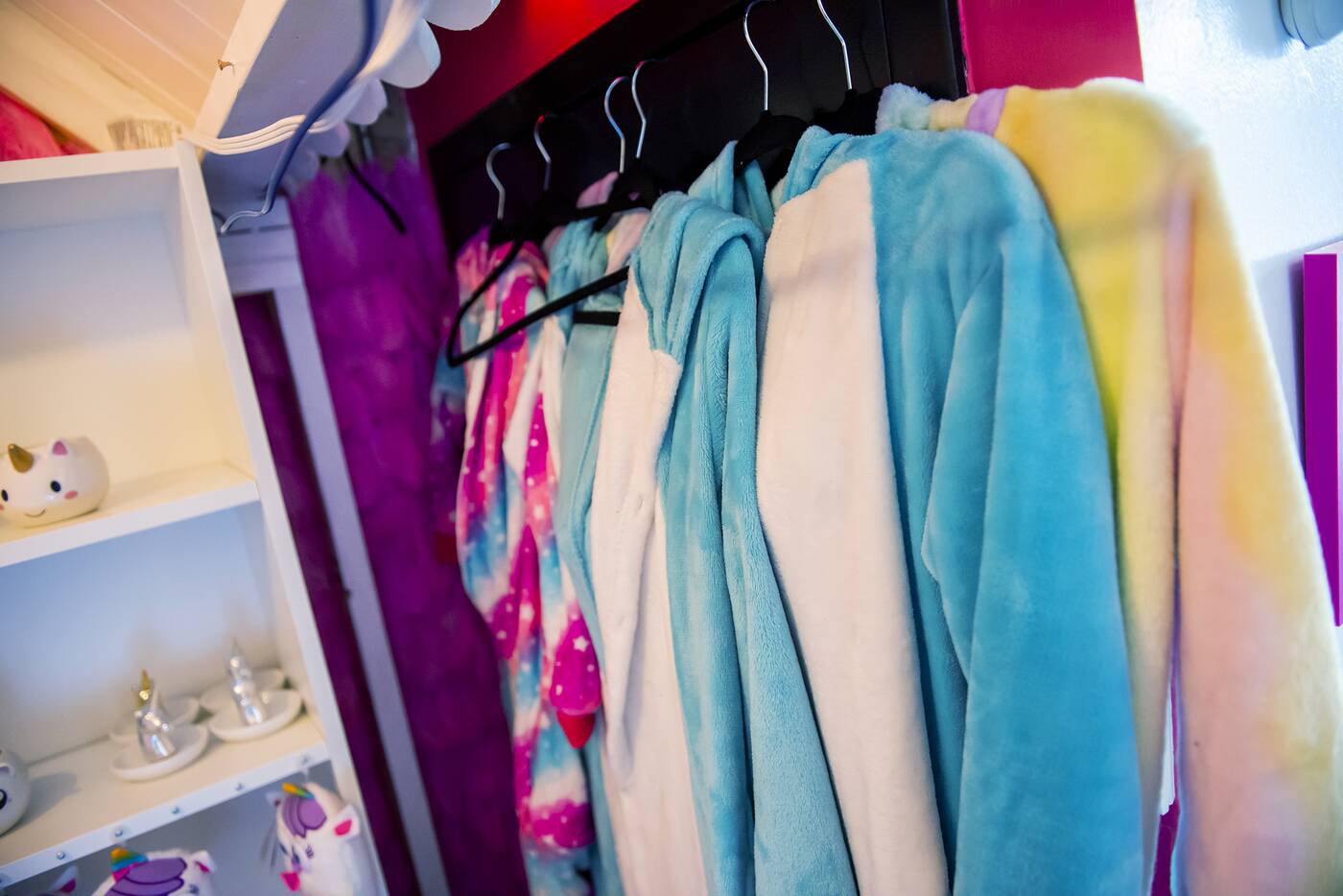 Pretty much as soon as you're seated you'll be offered a unicorn onesie to borrow and wear for the duration of your stay. 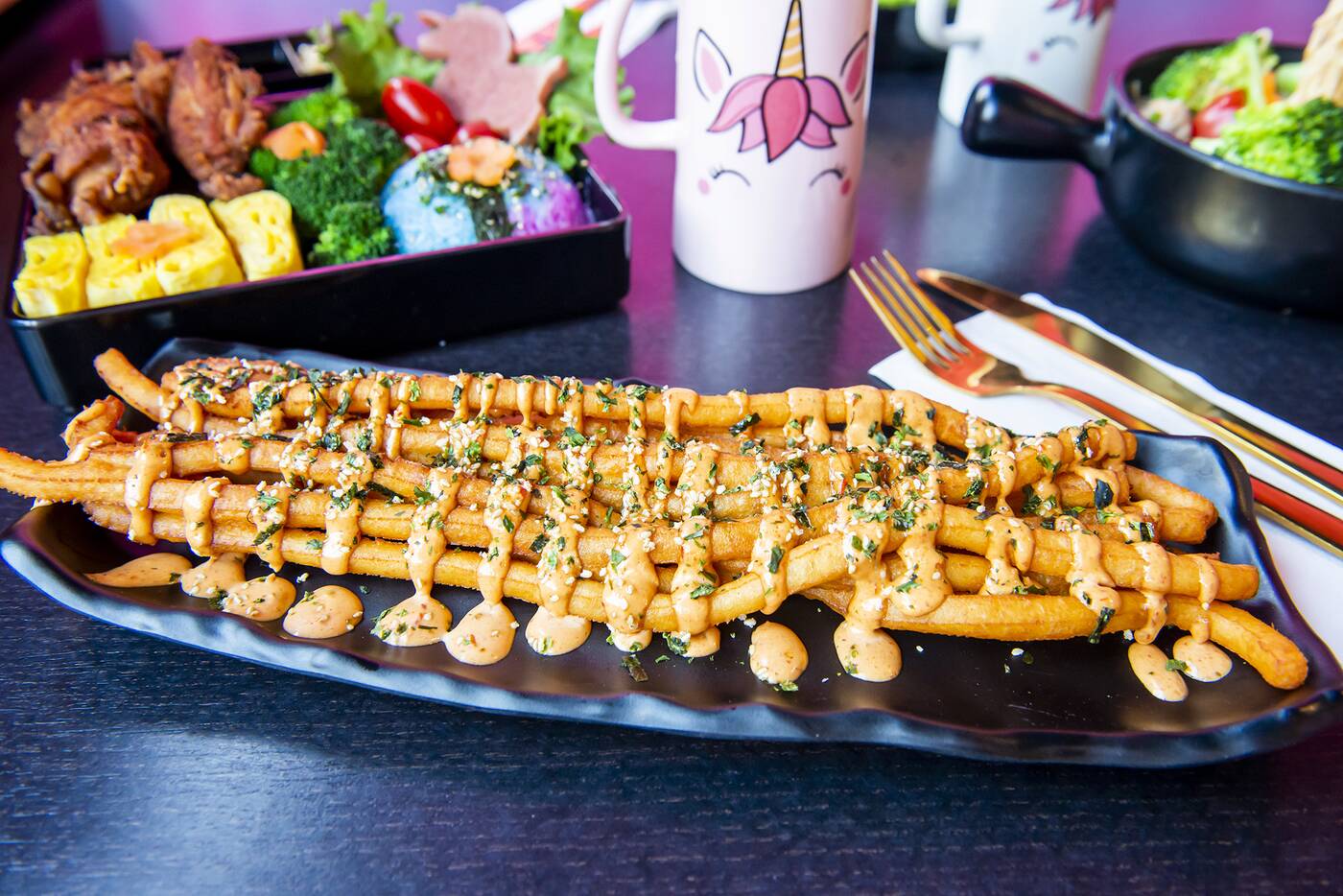 Ginormous French Fries ($6.50) from the appetizer section are in my opinion probably the best thing on the menu. 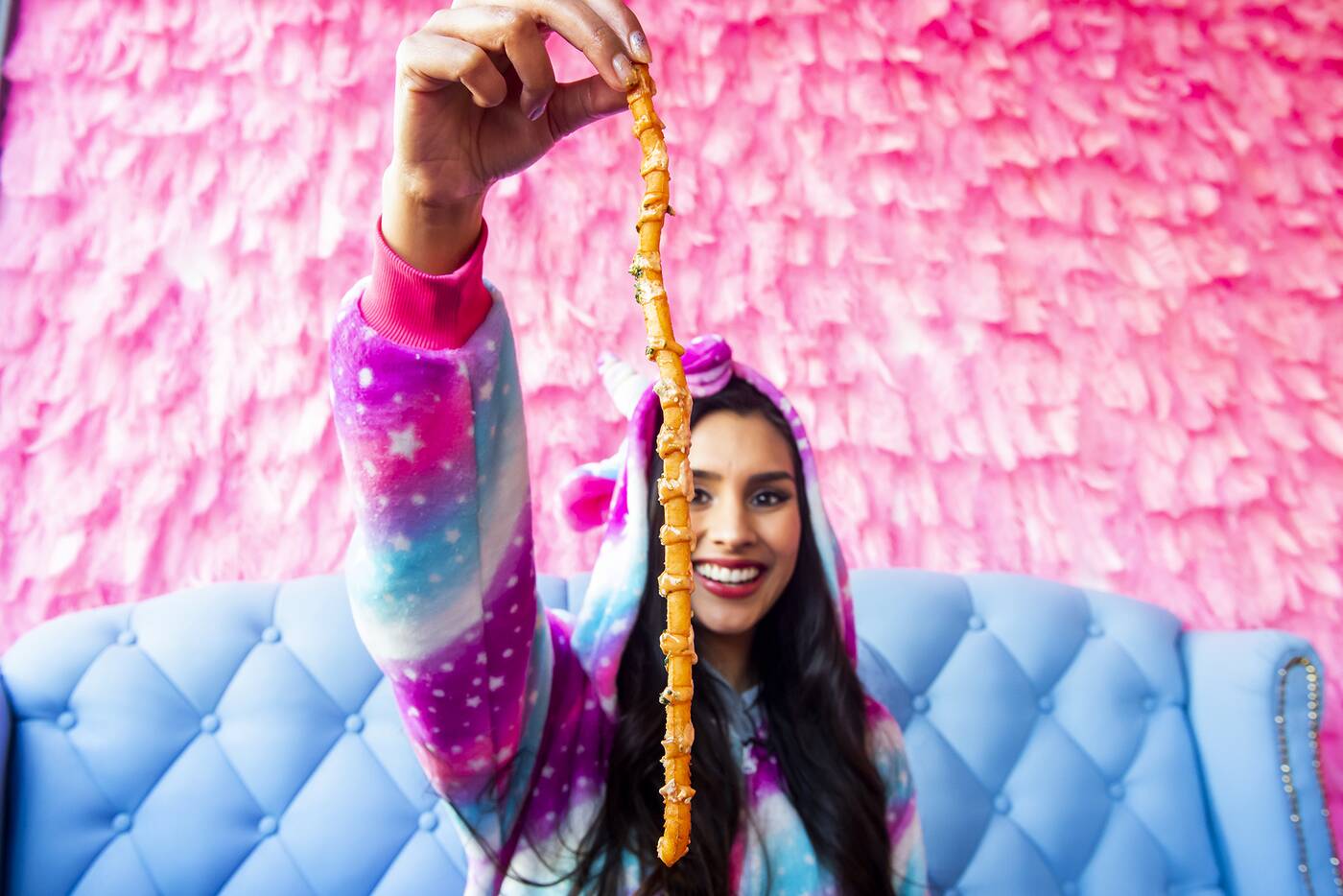 They're thankfully free of the all-natural blue and pink dyes that distinguish many items here, but still have a touch of whimsy thanks to being exactly one foot long. 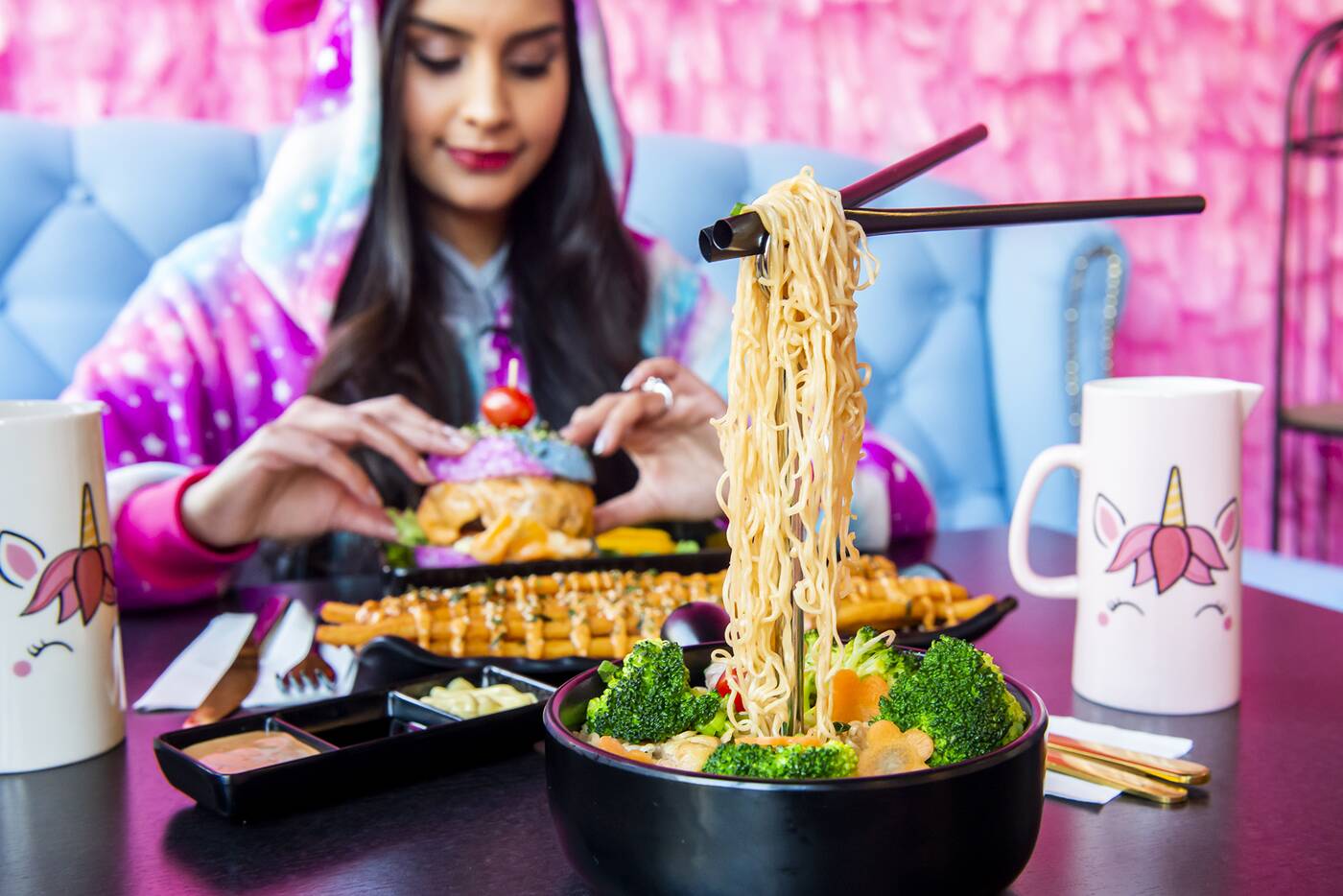 Magic Flying Noodles ($13) are an optical illusion that makes it appear as if chopsticks clutching noodles are floating in midair, though that's probably the most stunning thing about this dish.

Available with chicken, shrimp or veggies, it's a relatively standard bowl of oily stir-fried noodles with veggies. 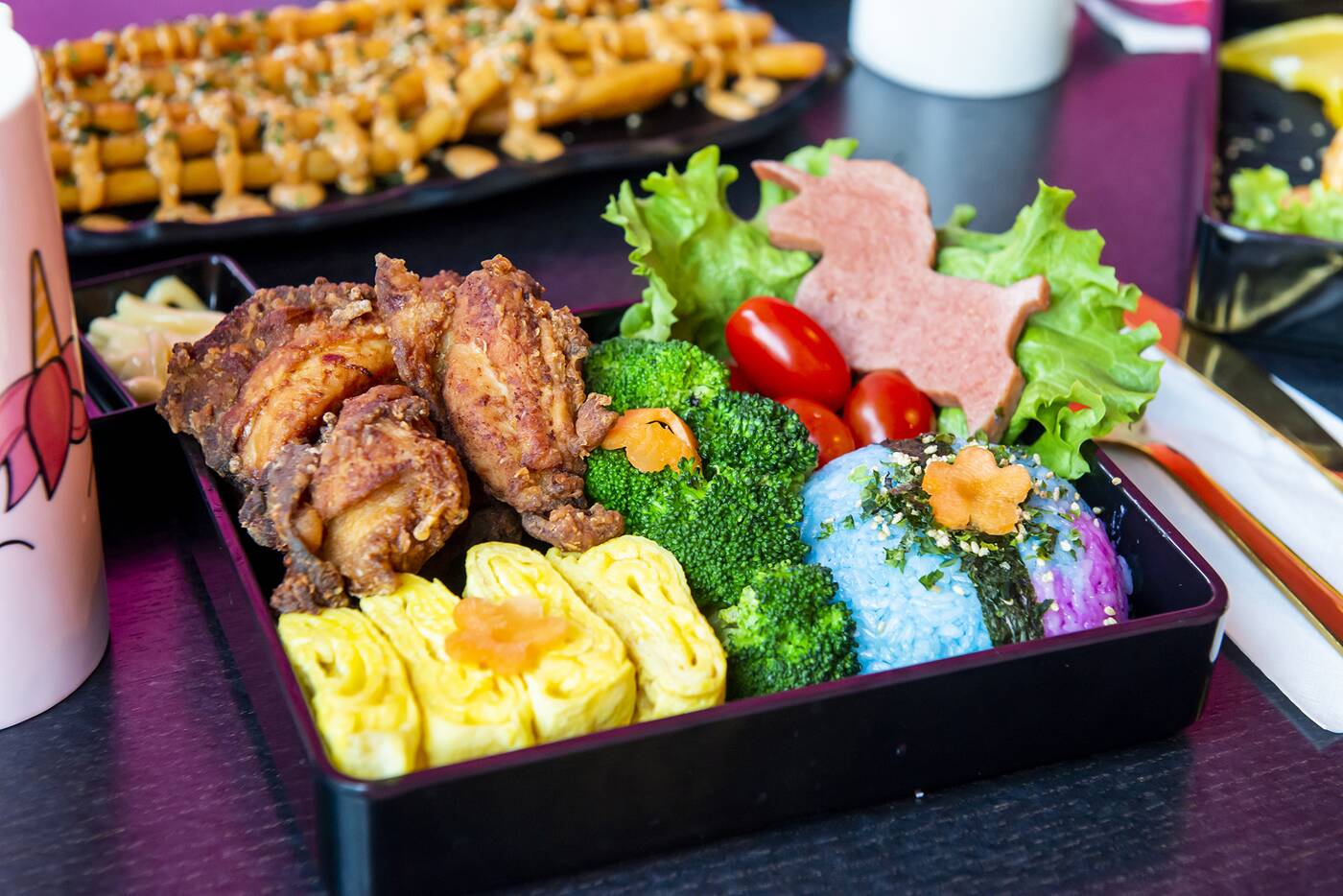 The highlight of a Unicorn Bento Box ($13) has to be the unicorn-shaped Spam. The other mystical element of the box is naturally dyed sushi rice (the colouring doesn't impart any flavour), but other than that it's a pretty basic standard bento box with egg, broccoli, tomatoes, and karaage that's actually pretty yummy. 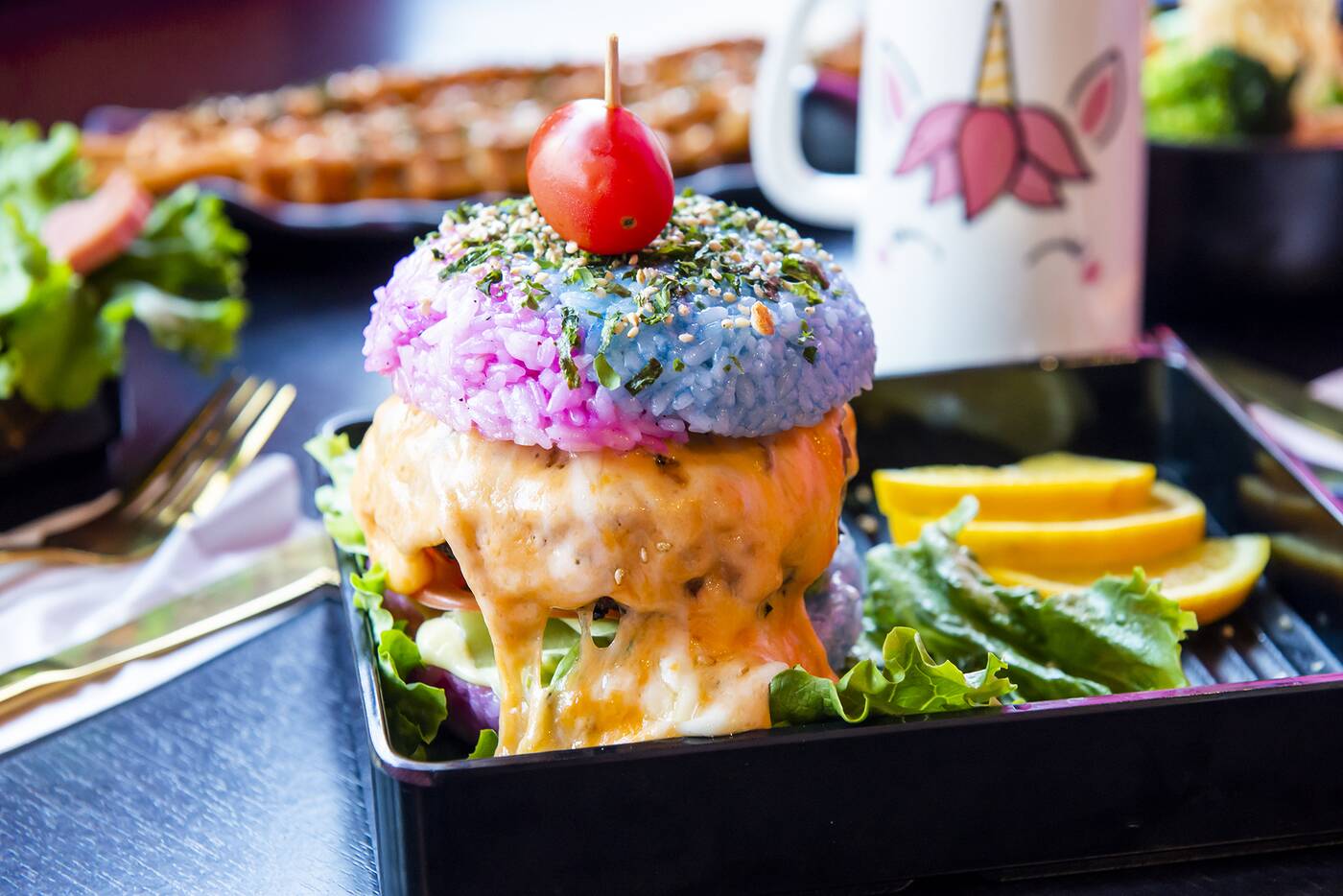 The Cheesy Unicorn Rice Hamburger ($9) is likely the most gimmicky thing on the menu, dyed sushi rice sandwiching your choice of beef, chicken, vegetarian or vegan patty.

Our beef patty ends up being accompanied by lots of melty cheese, caramelized onions, lettuce and tomato. It actually tastes quite decent, though doesn't really function as a burger: you're going to end up needing a knife and fork. 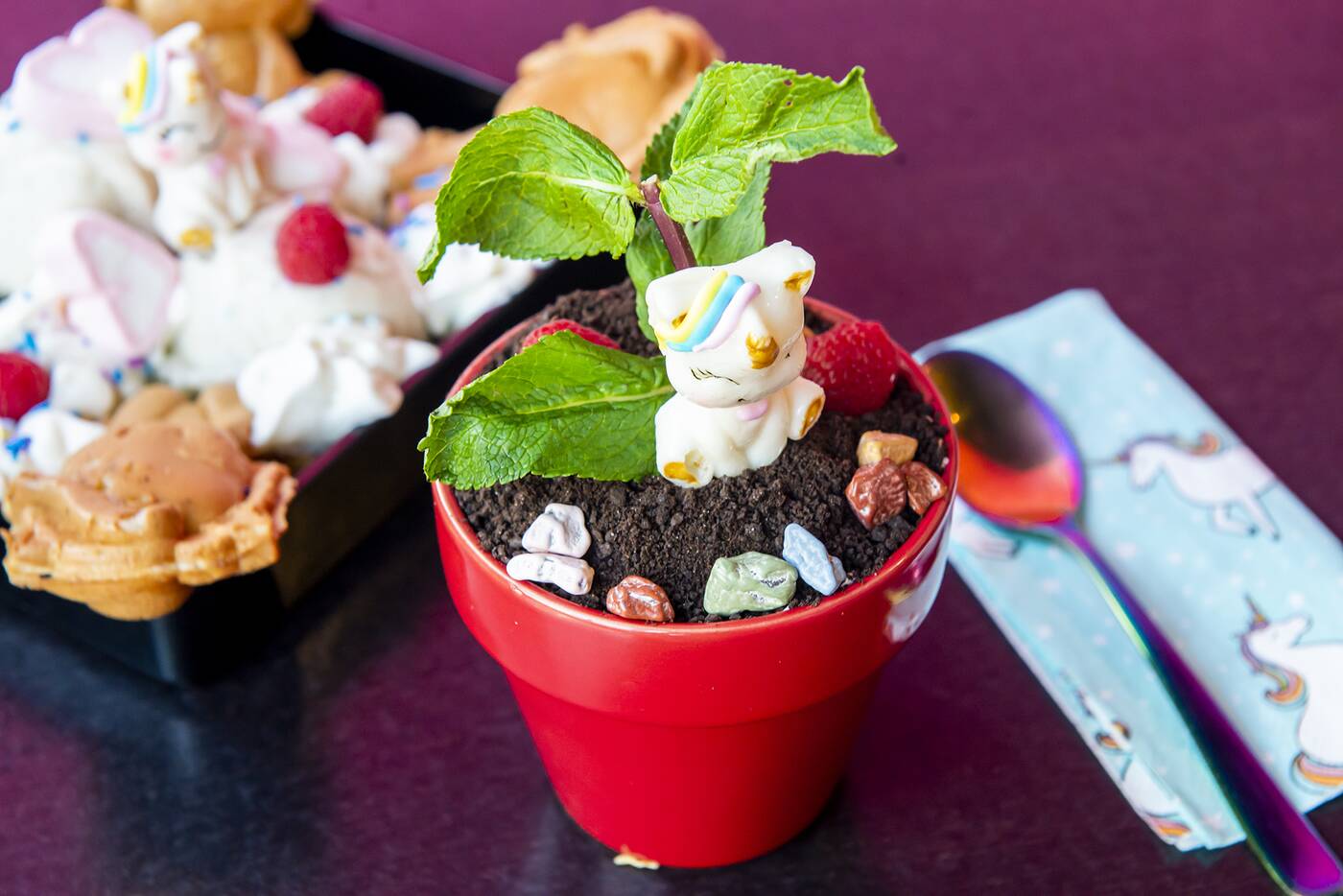 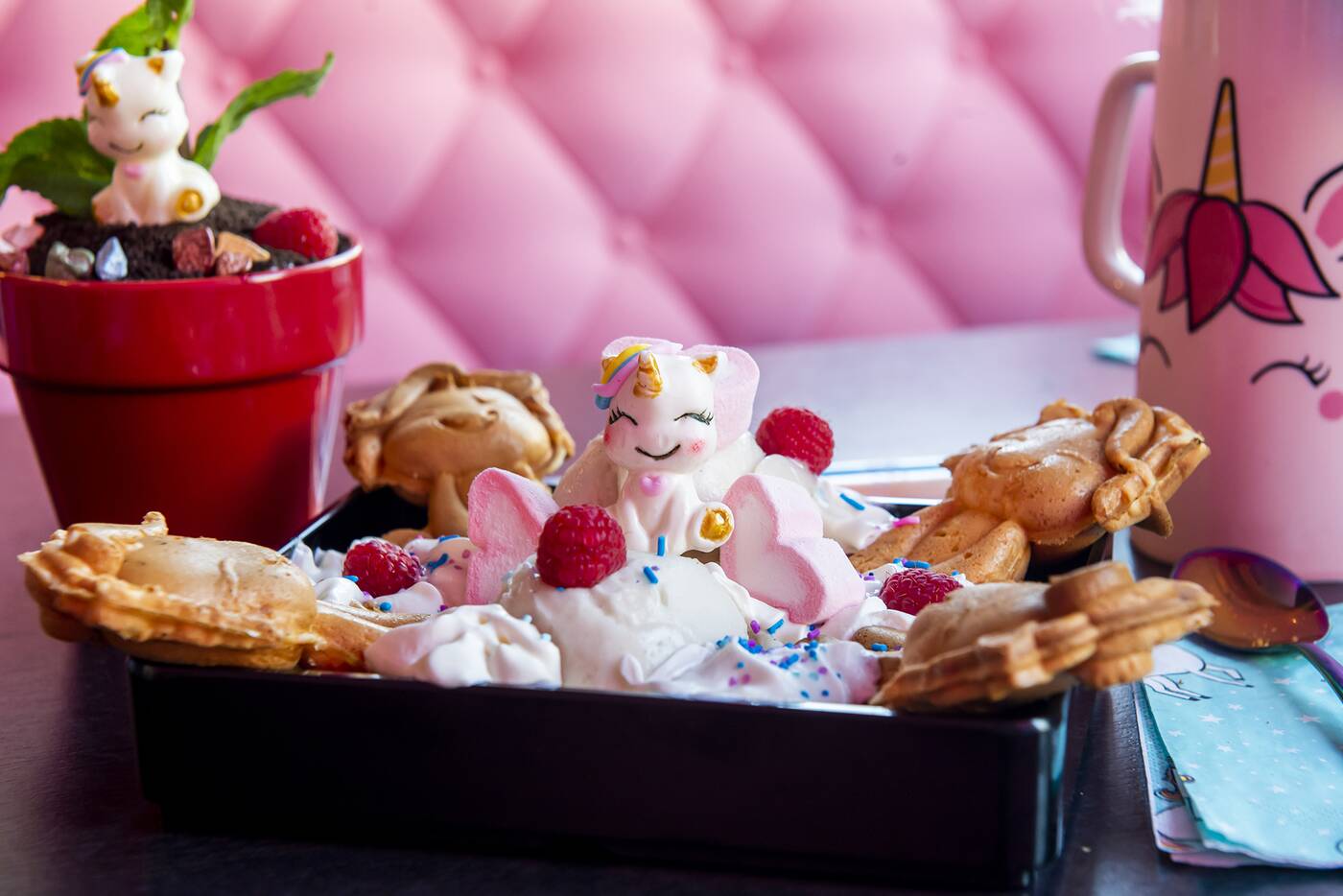 Unicorn Waffles ($11) are basically unfilled takoyaki, though seem to be missing their horns. They're presented with super sweet vanilla ice cream, marshmallows and cotton candy. 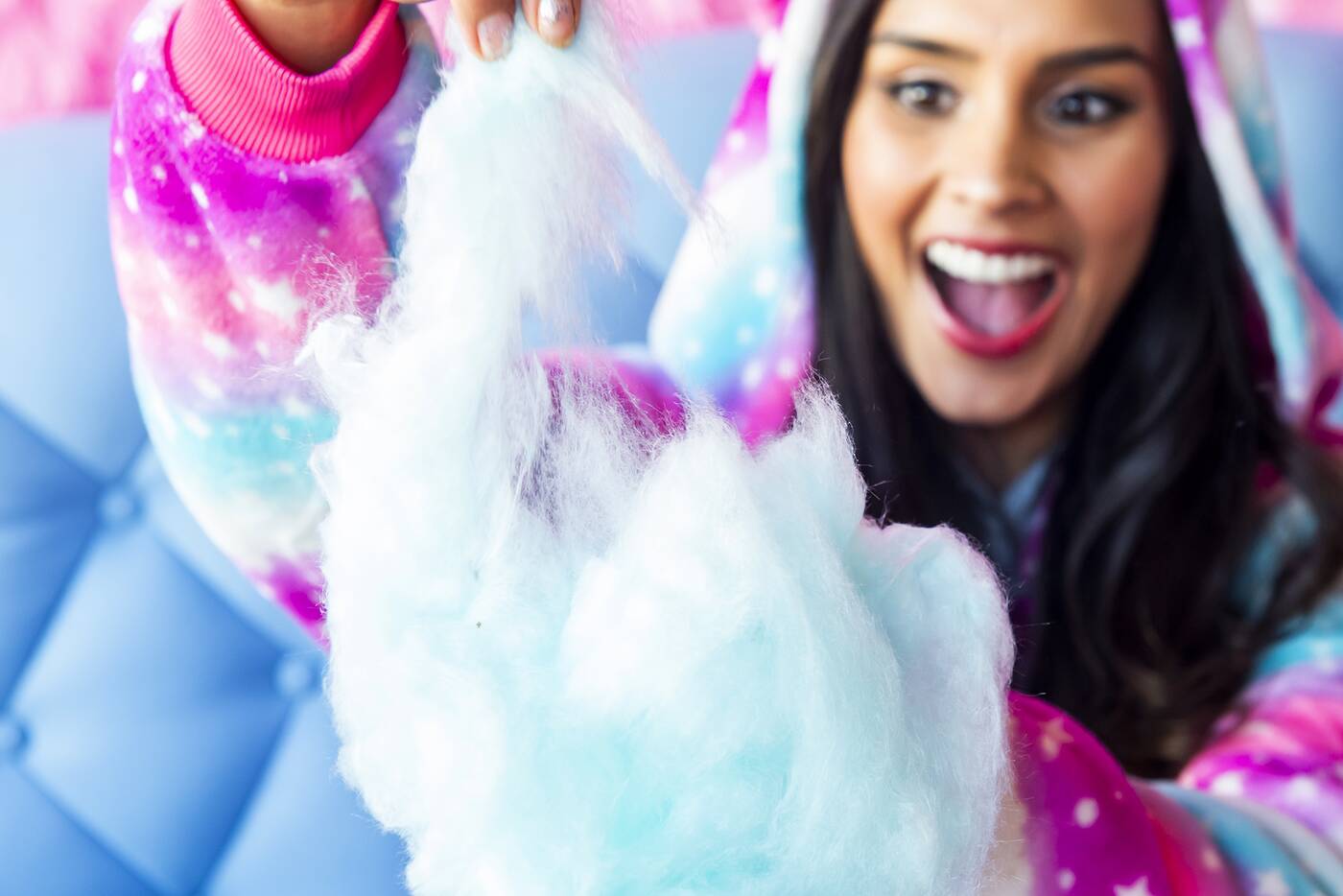 Unicorn Shakes are pricey at $12 but are tricked out with an entire donut, cotton candy, marshmallows and candy on top, and come in bubblegum, vanilla, chocolate and cotton candy flavours. 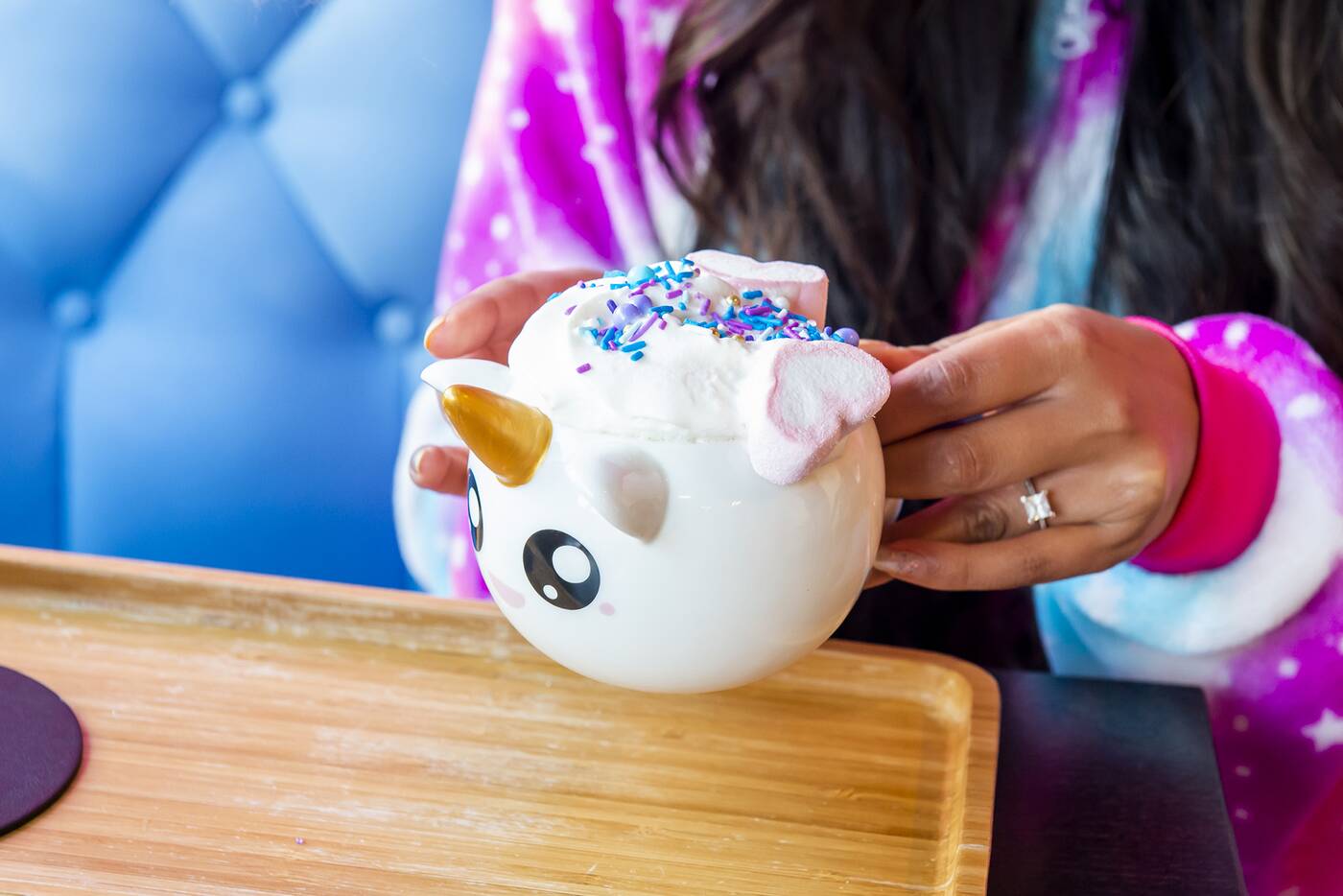 A Unicorn Hot Chocolate is more reasonably priced at $5.50 and more manageable, topped with whipped cream, marshmallow and sprinkles, and presented with a floating cotton candy cloud. 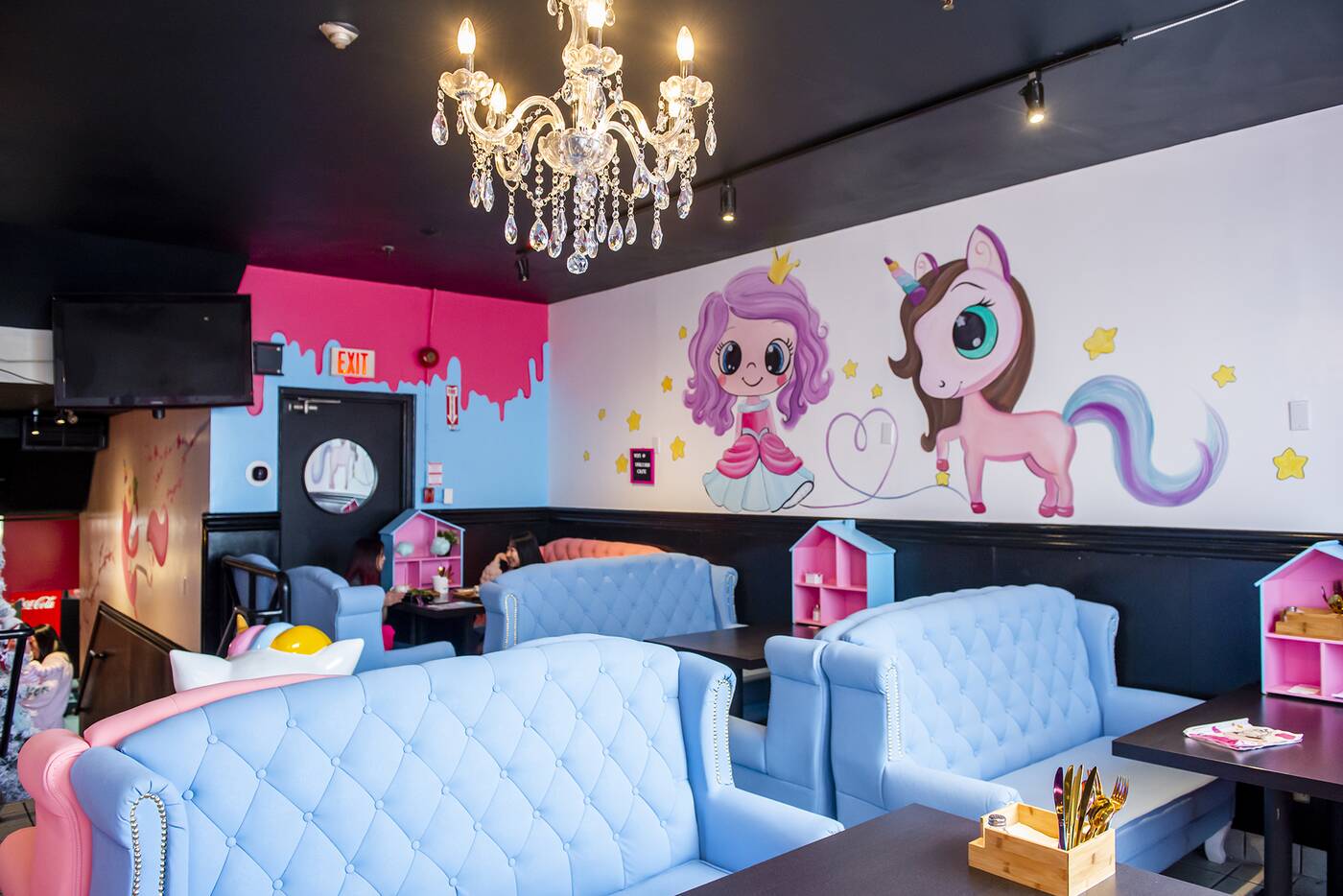 Unicorn Cafe is brought to us by the same people behind equally the equally outlandish/controversial Poop Cafe. 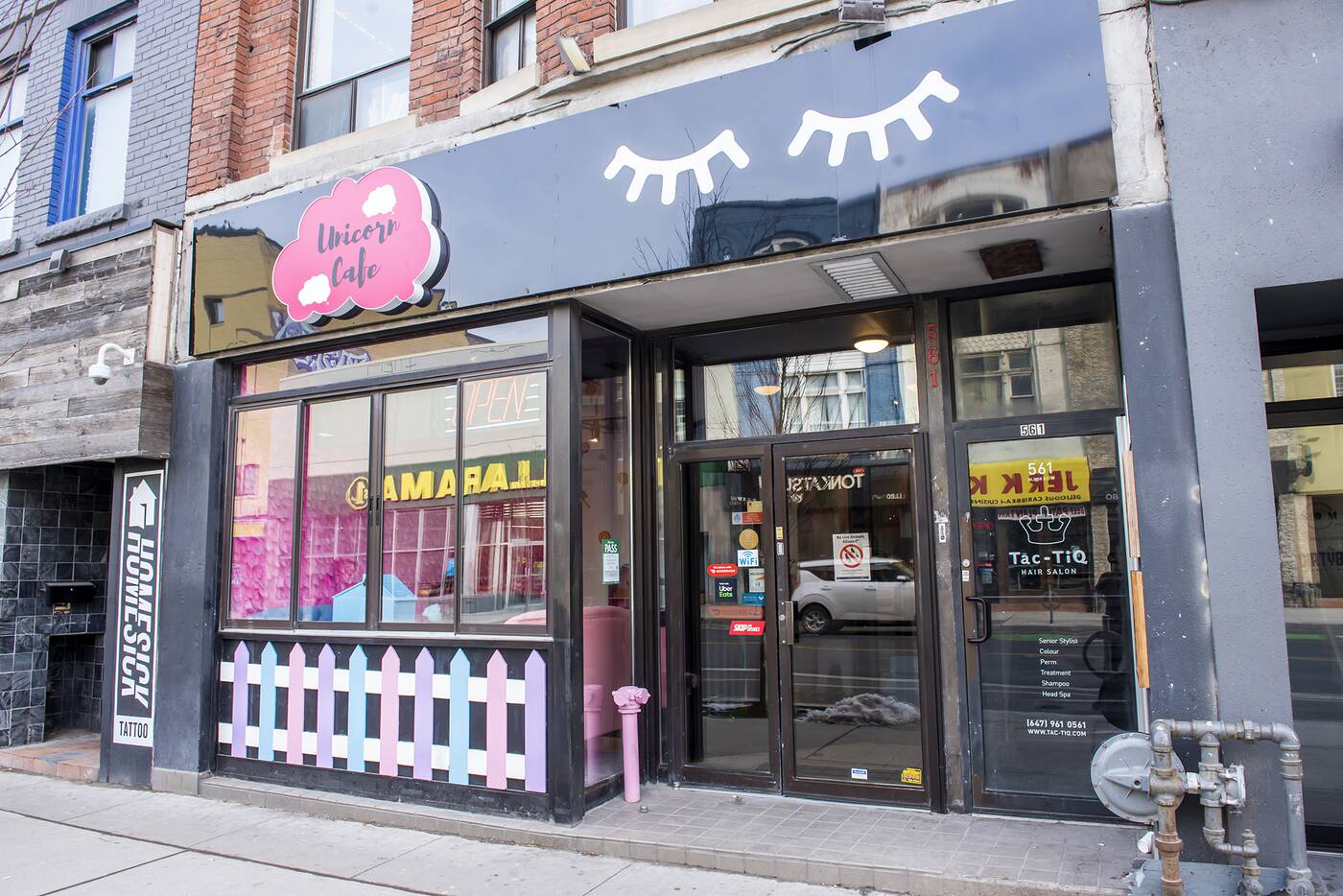