Uncle Tetsu's Angel Cafe may just be Toronto's - and possibly Canada's - only Japanese maid-style cafe. It might not have been the first, as another existed at one point , (there's also a pop-up charity version ), but this appears to be the only permanent one located downtown in a burgeoning Little Japan.

Unlike its space-challenged, takeout-only Japanese cheesecake - and matcha -focused Uncle Tetsu siblings nearby at Bay and Dundas, there's plenty of room in this two-storey building that used to be a printing house, with seating for 72 customers on the second floor that includes a mix of couches, booths and chairs at tables. 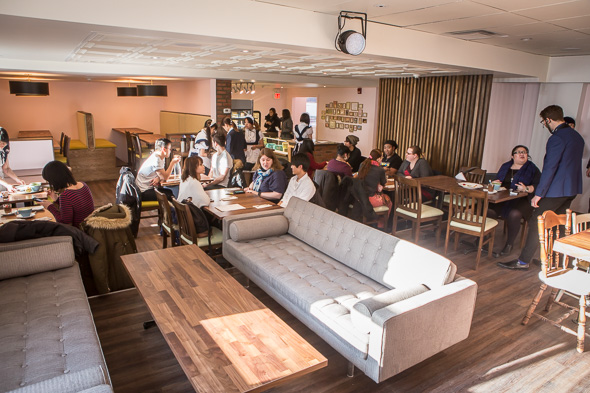 Upstairs, maid-like "angels" greet cafe patrons with a welcoming irrashaimase! dressed in cutesy cosplay French-maid outfits. While they take food and drink orders and enthusiastically serve customers, there is an emphasis on "maid- like "; the intention here is just to introduce and ease Canadians into this aspect of Japanese culture. 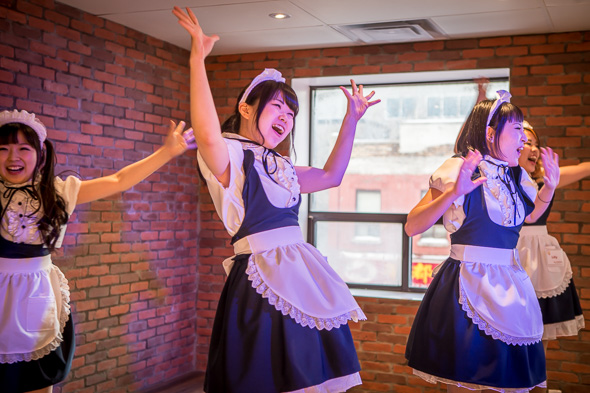 Otaku-wannabes, be warned: the staff here will probably not address you as "master" or "mistress" or offer ear-cleaning services (ew) like they might in the cafes found in the Akihabara district of Tokyo.

Instead, three days a week (Tuesdays, Wednesdays and Sundays), they'll do something arguably much more fun: perform spirited J-pop routines on a small stage, dancing like adorable anime characters (the Japanese Sailor Moon theme song is in their repertoire). I was skeptical at first, but ultimately, after witnessing it live, I found it all pretty endearing. 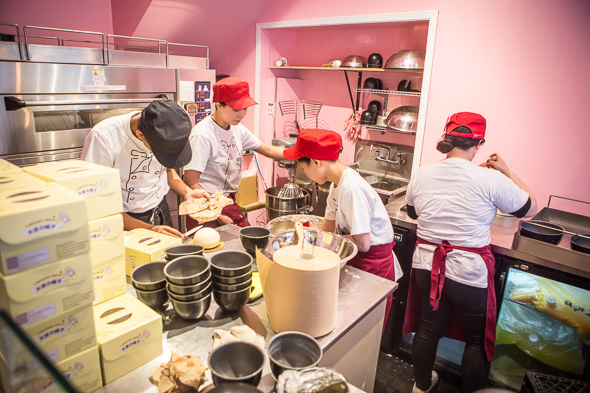 On the ground floor, a small kitchen visible from the front window produces one of the cafe's specialties - light-as-air "angel hat" cheesecakes. Its other specialty, the "lunar" cheesecake, is made in another kitchen on the second level, across from- the takeout counter where the angel hats ($10 each) can be purchased to go. 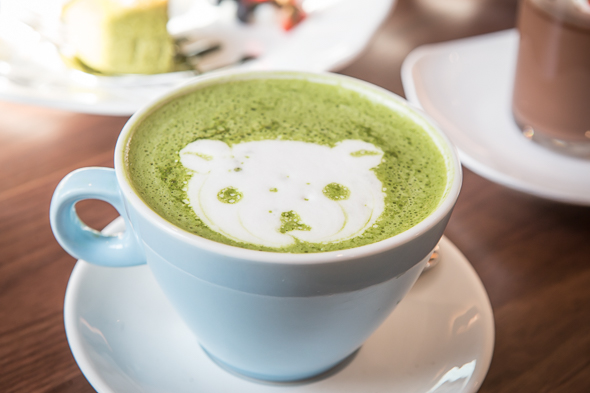 Dine-in offerings currently consist of made-in-house desserts and cafe drinks. Hot and cold beverages include espresso-based drinks and matcha lattes ($4 each) with kawaii latte art; we receive bear faces on ours while the table beside us gets hearts.

There is also a variety of loose leaf teas ($3.75 each) like genmaicha, houjicha (a new obsession of mine) or organic Earl Grey served in teapots. 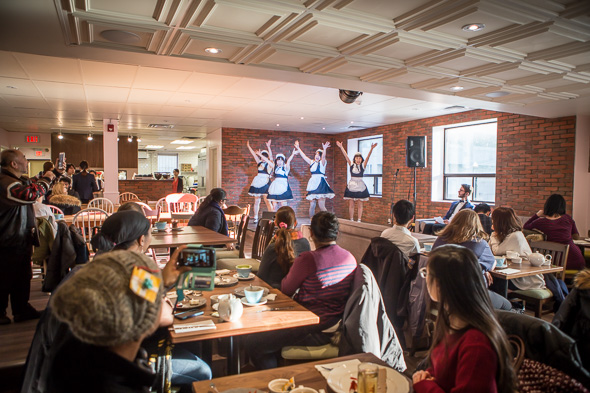 In terms of sweet treat options, there is pudding ($4.80 each) in original plain, chocolate or matcha flavours if you're not into cheesecake, but if you're at an Uncle Tetsu joint you should probably try a cheesecake. 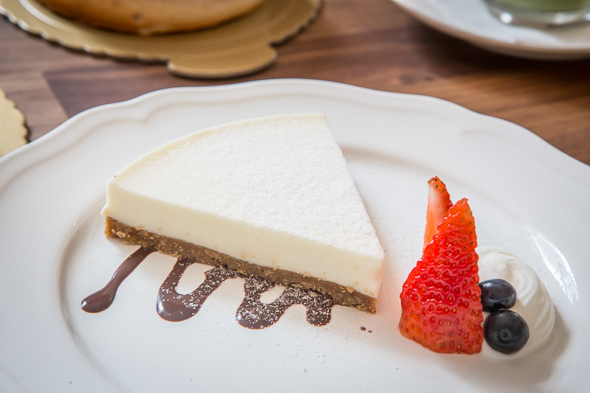 We try a slice of the no-bake lunar cheesecake ($5.80), which has a dense-ish pudding-like consistency on a graham cracker crust; it's most similar to the NY-style cheesecake out of the three offered, and comes in one of four flavours (original with strawberry/chocolate/maple sauce, chocolate, matcha or a refreshing yuzu). 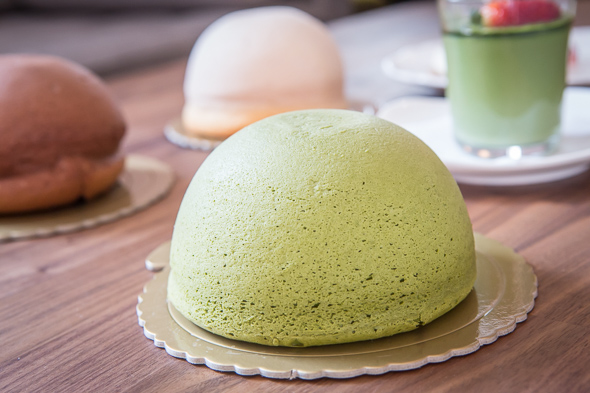 My friend and I both agree that the angel hat ($5.80/slice) is our favourite cheesecake of the three. It has a texture somewhere between a light and frothy mousse and a sponge cake, and it has a stronger cheese flavour since there's Grana Padano in addition to cream cheese in these baked round balls of goodness. 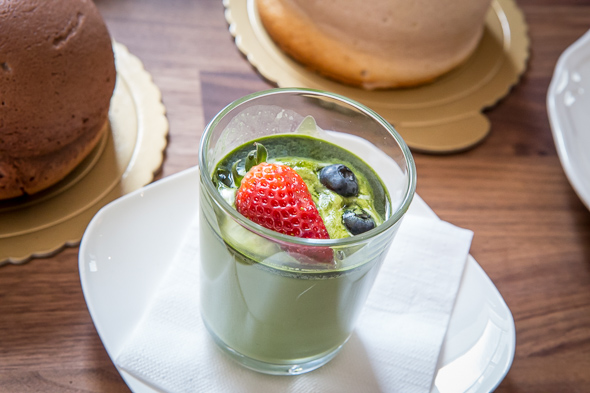 The original plain version has a vanilla-y, custard-like flavour and the strawberry sauce it's served with complements it well. I take a strawberry angel hat home with me, and it tastes just as good even a couple days later. The strawberry flavour reminds me of strawberry Pocky, which ain't a bad thing, as I have fond memories of eating those sticks as a kid. 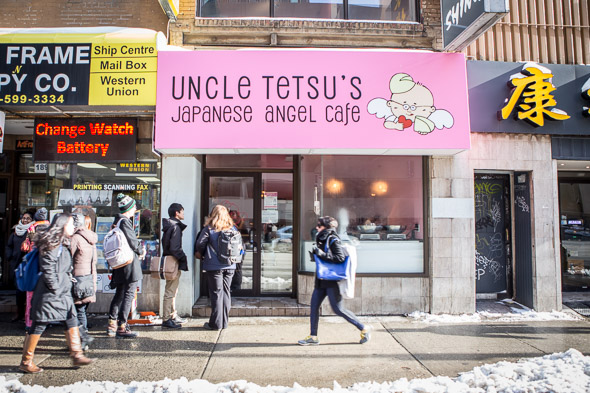