Tsujiri has arrived at what is quickly becoming downtown's Little Japan by Bay and Dundas, just in time for the city's current obsession with matcha . This Japanese tea brand was founded in Kyoto (although it's now based in Fukuoka) over 155 years ago by Riemon Tsuji, who was an innovator in tea culture.

While the brand has already expanded outside of Japan to other parts of Asia (Taiwan, Singapore, Malaysia, China, etc.), this is Tsujiri's first foray into North America. 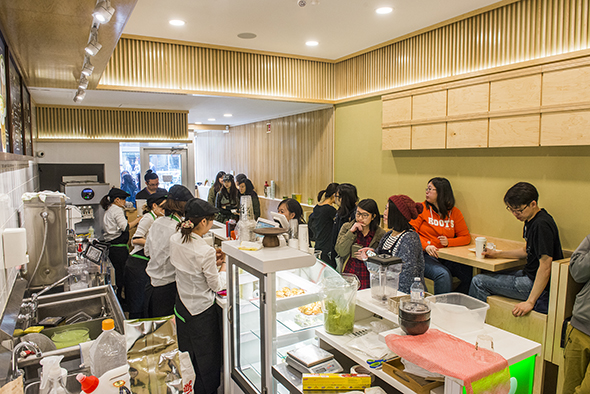 Occupying what was previously a convenience store, the small space had to undergo a complete overhaul and took months to renovate. Combining Japanese design with Canadian materials, the furniture is built with wood from Douglas fir and maple trees.

As it's mainly intended as a take-out spot, there are only 10 seats available, with three two-person tables lined along the wall and a charming traditional tatami mat seating area in the back. 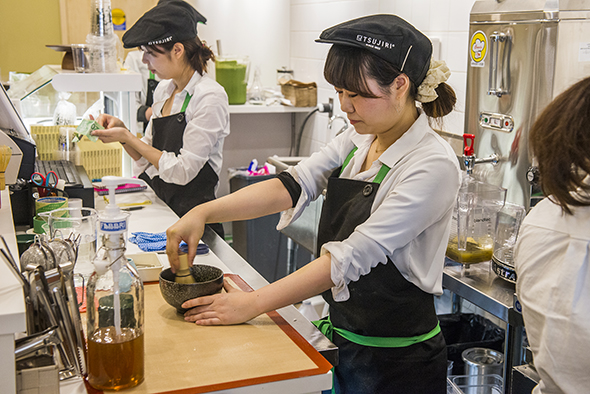 Tsujiri specializes in matcha, which is a special kind of green tea that's stone-ground into a fine powder. It contains less caffeine than coffee and more antioxidants than regular brewed green tea, making it an attractive alternative for its health benefits. (I personally just like how it tastes.)

All the tea here is specially selected and imported from Japan, and from what I can tell, it's good quality stuff.

Depending on how familiar you are with matcha (some people find it tastes bitter), Tsujiri offers a variety of drinks and desserts that span three different levels of intensity (marked on the menu with one, two or three leaves) so that matcha newbies can ease their way into the flavour. 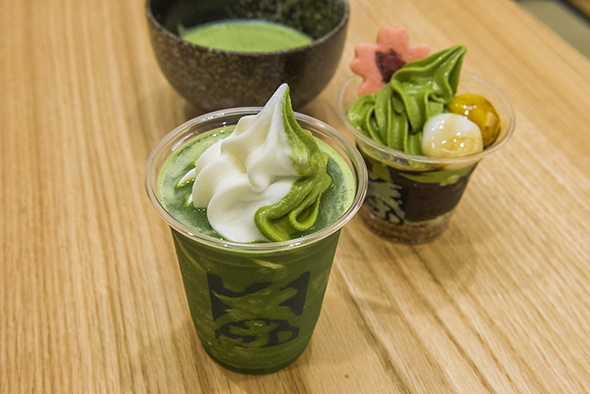 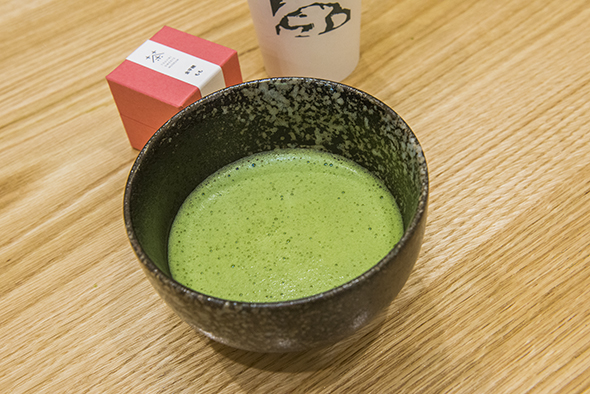 Drinks on the strongest end of the scale can be found under the O-Matcha part of the menu, and include hot or cold matcha tea ($4.50) made the traditional way, by whisking water and the green powder with a bamboo whisk in the serving bowl until a nice froth develops. 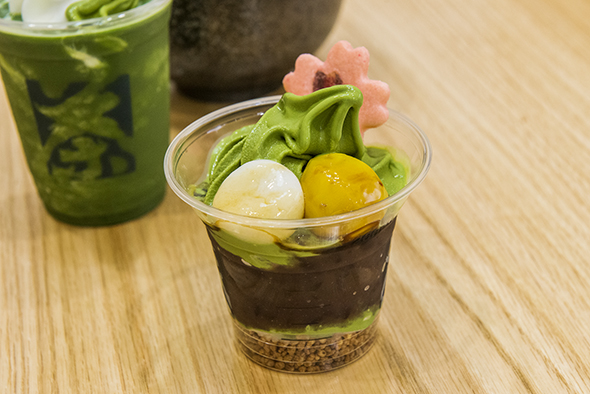 One of my personal favourites is the Tsujiri sundae ($7-$7.50). On the bottom of the cup is a layer of crunchy roasted brown rice, then a thick layer of red bean paste in the middle and a swirl of matcha soft serve at the top (you can also choose to have just vanilla or a mix of the two).

This treat also comes with a chestnut, a shiratama ball (it's chewy like mochi) and a sakura (cherry blossom) cookie with a sour and salty petal in the middle, providing an interesting contrast to the sweet and slightly bitter flavour of the matcha. 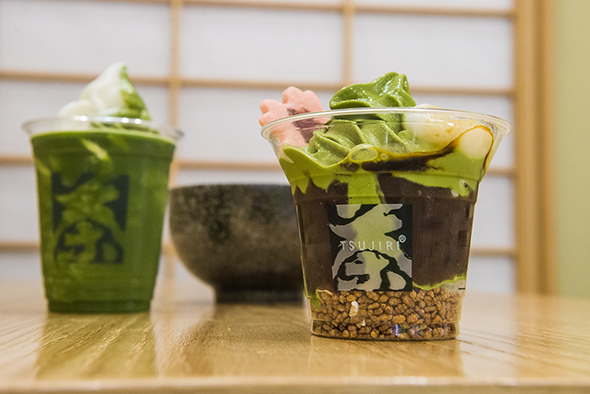 The whole thing is a symphony of tastes and textures, and like everything else I try here, the sweetness level is perfect - it's not too sweet, but just sweet enough. 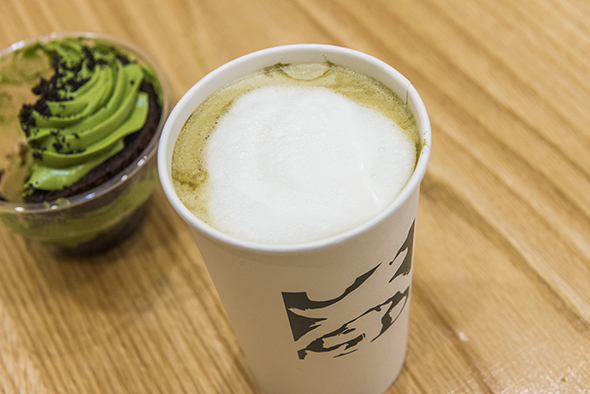 This holds true with the houjicha latte ($5.25/$5.75), which is something I've never tried before. Houjicha is a roasted green tea that contains even less caffeine than matcha, and its roasted flavour adds a pleasant new dimension to the latte. This could be the next big thing.

Unique to Toronto offerings include a hot drink series with Japanese-Canadian fusion beverages like an O-Matcha maple syrup latte ($6/$6.50) or a souped-up version of it with whipped cream and salt ($6.25/$6.75). 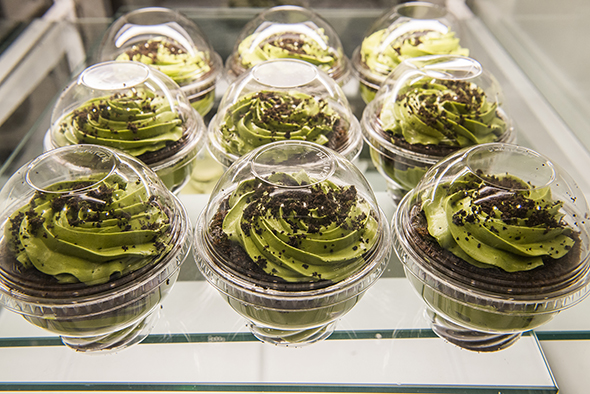 There are also baked goods that were developed especially for this location, such as matcha macarons with a red bean filling ($2.50 each) and a surprisingly lovely parfait with alternating layers of chocolate cake and matcha buttercream ($4.75). 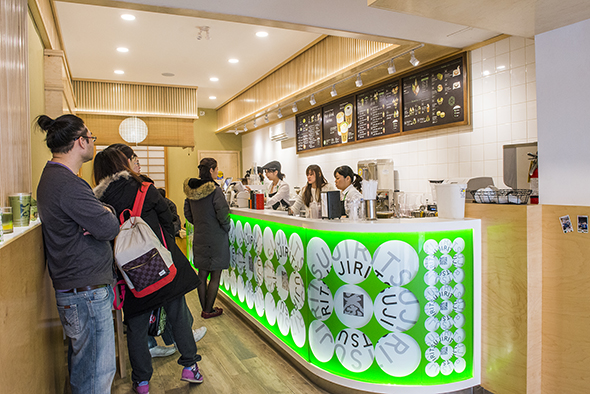 Prices here are not cheap, but considering the quality of the tea used (making matcha is an expensive, time- and labour-intensive process), they're understandable. Staff take their time making the drinks, preferring to do things right over doing it quickly, so be prepared to wait a bit. 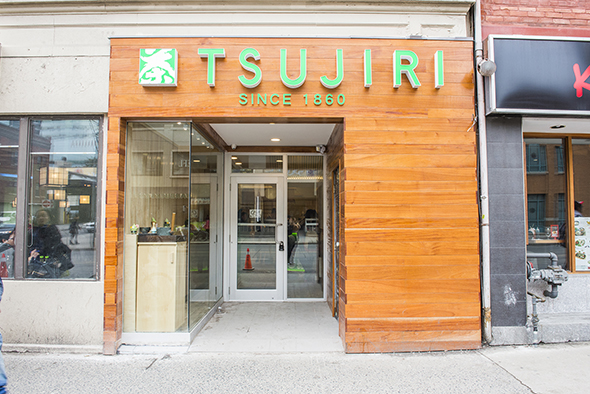