Tokyo Smoke can be found occupying a modified shipping container inside the loading dock of a former tobacco factory tucked away at Adelaide and Stafford just south of West Queen West.

This "next wave" coffee shop has an industrial yet upscale vibe, making optimal use of its small space with a coffee bar up front, a communal table (with a strong WiFi connection) surrounded by well-curated goods in the back, plus more seating in the form of a few Eames chairs outside. 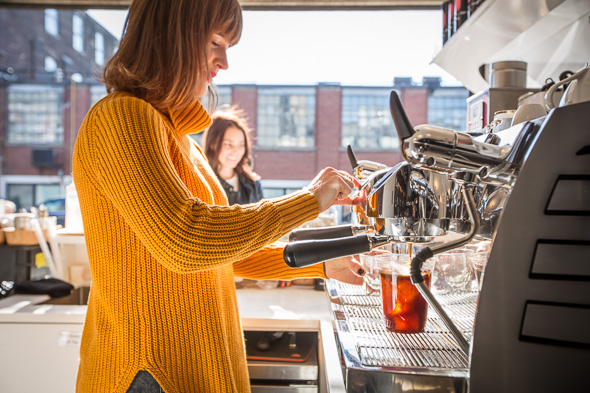 There's a foreign familiarity to the vibe of this spot, and it's not just due to its name (although that's a big clue); it reminds me of places I've visited in Melbourne, San Francisco and yes, Tokyo. 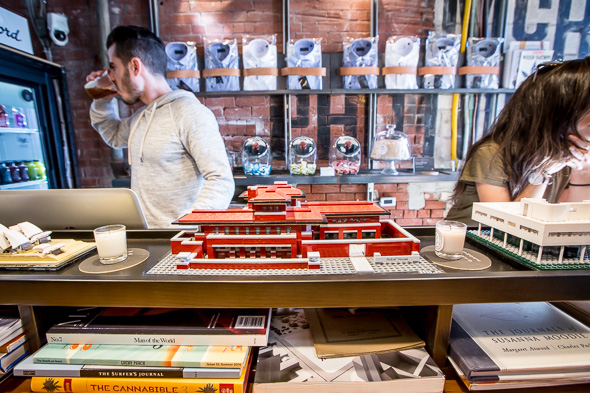 It all makes sense when I learn that founder - and Toronto-native - Alan Gertner has lived abroad for the past decade (he tells me the Blue Bottle kiosk in SF's Hayes Valley was an inspiration).

He worked as a management consultant in New York City and then ended up at Google for six years, spending half of them in California followed by another three leading its travel department in Singapore. 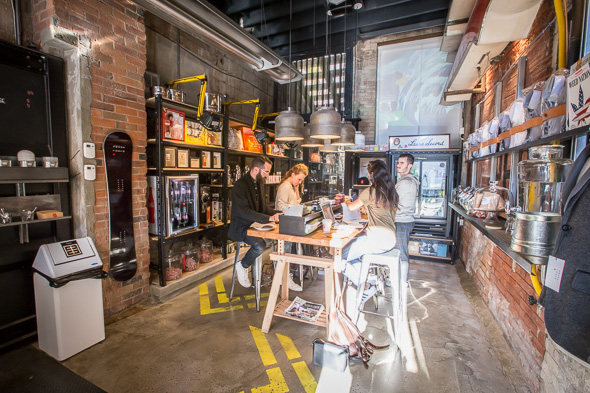 After a while, he realized he wanted to focus on his own personal growth more than career success, and quit his job to discover what would give his life more meaning (he notes that the term "time off" implies work is more important than non-working life and calls this period of reflection " time on " instead). 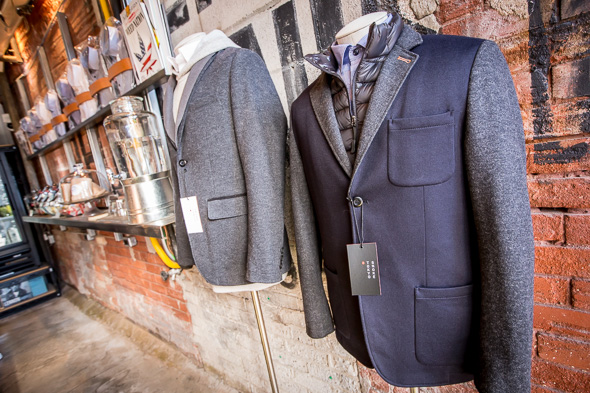 Gertner travelled to Japan and eventually came to the conclusion that he's passionate about three things: coffee, clothing and cannabis. He returned to Toronto and partnered with his entrepreneur father Lorne to open Tokyo Smoke, which aims to be a global lifestyle brand in the vein of Monocle, specializing in those three Cs. 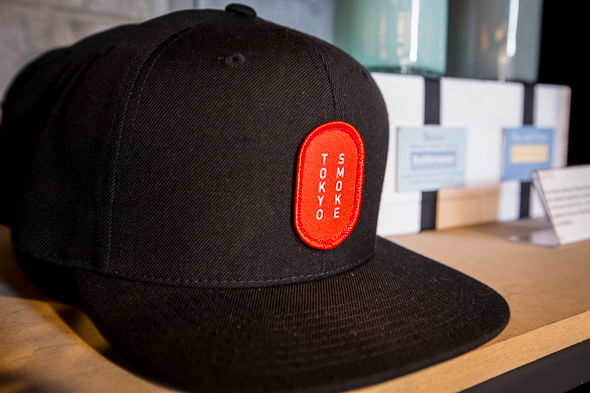 Named in appreciation of Japan's (and the Gertners') love of artisans, the shop is filled with unique and quirky items on display, from rare Lego architecture models and a vintage Macintosh SE computer to a canoe called Ketchup. Studio Ghibli films are projected on the wall; when we visit, Ponyo is playing. 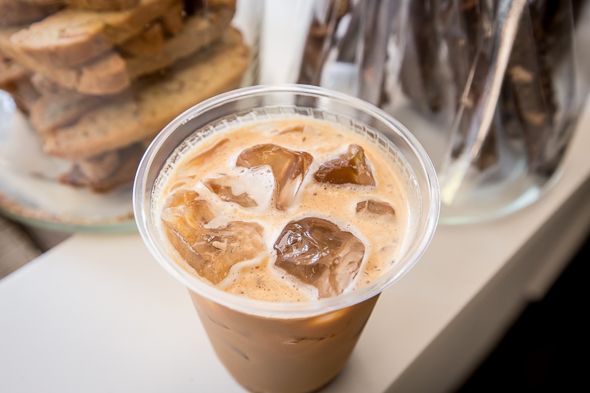 Loose leaf teas ($3/$5) are from Pluck , and there are even secret menu drinks like a creme brulee'd latte made with a blowtorch. Coffee collective memberships are available for $20/week and include unlimited coffee and tea along with discounts on other products in the shop. 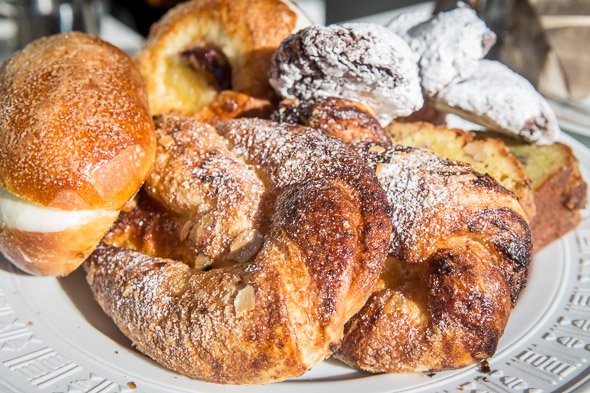 Forno Cultura supplies the fresh baked goods, including gourmet cookies ($3 each) containing sun-dried tomato and asiago or candied black olive; they may sound like strange ingredients for cookies, but turn out to work surprisingly well. 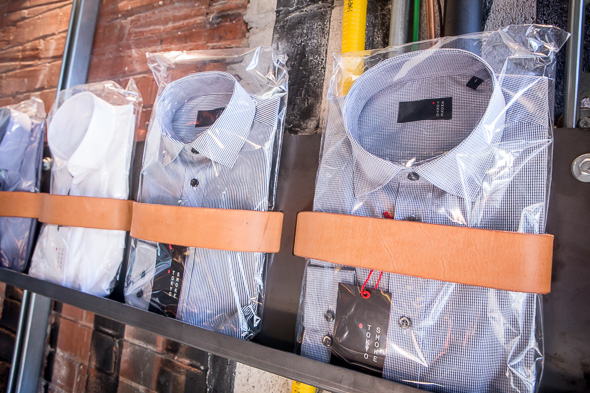 In addition to the cafe offerings, the space doubles as a showroom for the Tokyo Smoke clothing brand, which currently consists of a luxe men's line of shirts, sweaters and coats (also sold at Gotstyle ), as well as a place to pick up cannabis-related items like rolling papers, branded grinders, CannaVaults and premium vaporizers like the Volcano and Pax 2.

It's interesting to note that Gertner's grandfather Sam co-founded a successful womenswear company (the now-defunct Mister Leonard) in the '60s that manufactured its clothes in this area, and Lorne Gertner acquired the first licence to produce medical marijuana when it was first legalized, so entrepreneurship, clothing and cannabis clearly run in the family. 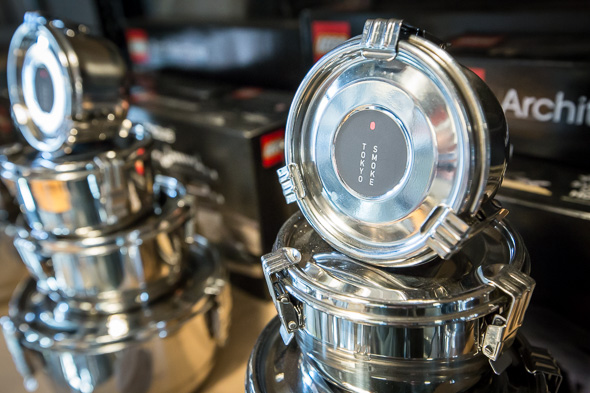 The aim of Tokyo Smoke is to provide an enjoyable and relaxing retail experience that's more tactile than shopping online. Plans to expand next door with a shirt shop are imminent, as are more outposts, both in the city and elsewhere (Tokyo Smoke-branded marijuana will also be sold in Washington state).

As for this original, slightly-off-the-beaten path location, it appears to have established a loyal following of caffeine-loving regulars who live or work nearby, charming nearly everybody who comes across it (including me). "We've been very lucky to be embraced by the community," says Gertner. I highly doubt it's luck. 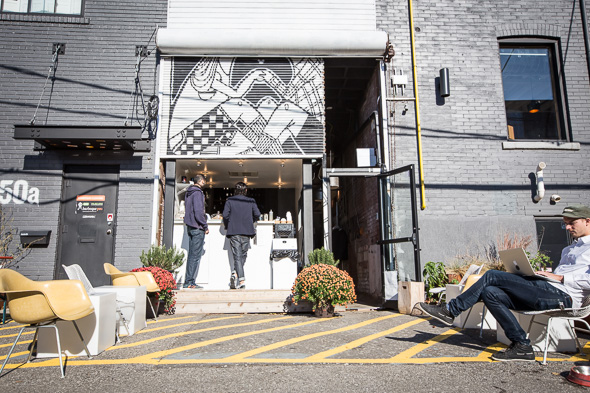