Earlier this month I mentioned that one of Queen West's great cafe's, Tequila Bookworm, had closed its doors and moved to a new location along the strip.

While that doesn't sound like a big deal, if you've been to the original location, you've got to wonder why any owner would want to leave behind such a gorgeous spot. With it's extra high tin ceiling, chandeliers, exposed brick, and vintage wooden window booths and furniture, Tequila Bookworm was easily one of the nicer cafe's on Queen St.

The move promised a new look, a soon-to-be 2nd floor and a real kitchen (which would bring a new extended menu to the table). Was it worth it? After hearing mixed reviews, I packed up my laptop and spent an evening blogging from the new location as I scoped things out for myself.

The seating is set up a little 'friendlier'. As in, you should hope you like the people sitting next to you 'cause they're probably reading your e-mail over your shoulder.

Things seem closer and a little less private due to the arrangement, but it's still comfortable. If anything, there are more tables around to push together if you have a group larger than 2-4 -- something that was hardly a viable option at the old location. 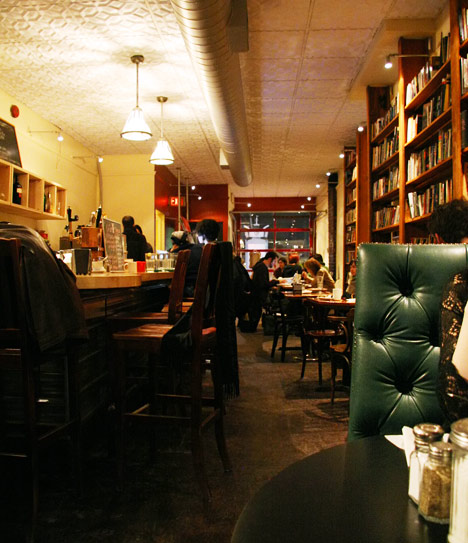 Sofas? Yeah, there are still one or two upholstered seating areas, but nothing as extensive as before. New is the funky round booth at the far back (it peeks into the bottom right corner in the above photo) and it's a nice spot if you can snag it. Old, is the row of seats lining the bar. They've gone from retro stools to tall bar-chairs, but the effect is the same -- you can still chat and inquire as to whether or not that's really William Shatner the waiter is playing stereo system.

Ok, so for those who were drawn in by that sandwich photo, I'll get to the food.

Nothing has changed (yet). The new extended menu isn't ready quite yet, so I'll bring you Part 2 of this review once the fryer is sizzling and crepe-maker steaming.

In the meanwhile, we ordered from the usual selection of sandwiches and salads -- all still delicious . Pictured at the top is the chicken sandwich in super soft tomato focaccia, surrounded by a side salad. Below is the tuna sandwich (again on focaccia) with the daily soup (corn chowder on this occassion). 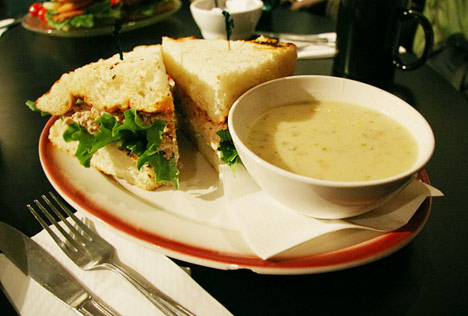 Creamy hot chocolate with Bailey's (served in a cup or bowl) to top it off: 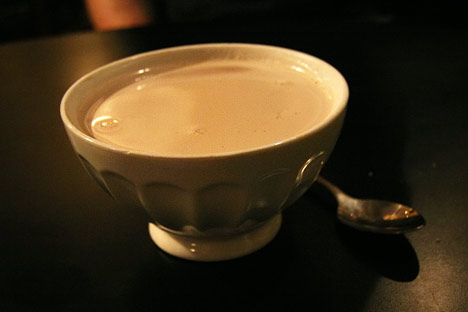 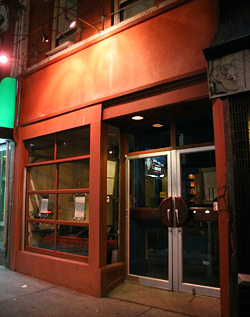 Yes, I miss the high ceiling and the window booths, but the new Tequila has still got charm and the drinks are still prepared with much TLC... so, I'll stick with 'em.

That said, a new spot called "Just Us" is opening in the old location. Despite the painfully bland cafe name, I may just pay them a visit if they've still got those old booths.

Yes, the storefront, like the old, has no signage.