The Shmooz is a cafe south of the Danforth on Pape Avenue. Unless you live nearby, it would be easy to miss since it's located off the beaten path in a residential neighbourhood, a few blocks away from bustling Greektown. But it's worth venturing to, because in addition to serving good coffee The Shmooz boasts a robust lunch menu.

The space is defined by a large mural, which takes up an entire wall. It's a playful and colourful depiction of the neighbourhood created by South African artist Frans Groenewald . It's actually a digital, vinyl copy of the original illustration. Looking at it, you'd think it was drawn right onto the wall. 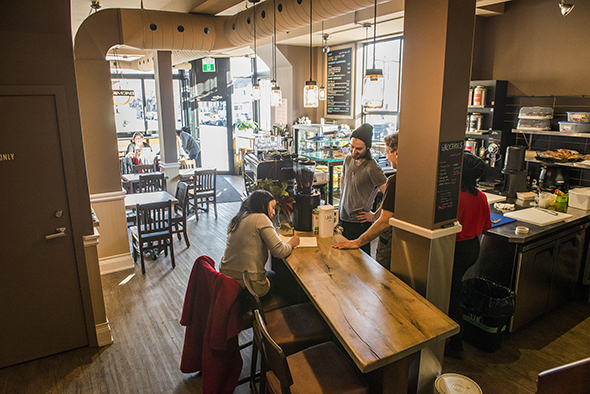 The Shmooz has an abundance of seating; the combination of both smaller and communal tables, along with the bar-height counter positioned along the large front window, accommodates up to 29 people. There's also free wifi and a handful of outlets. 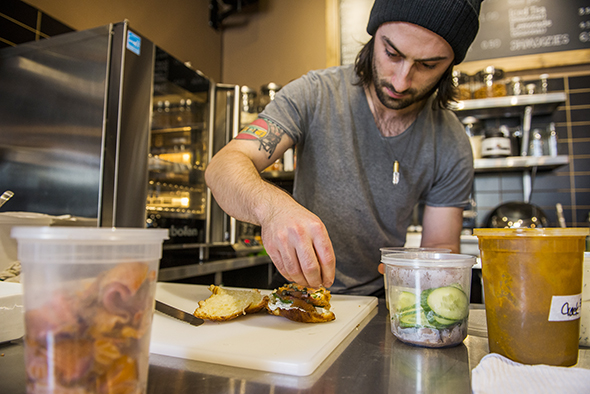 The cafe is owned by Barry Muskovitch, who's both a trained chef and a woodworker by trade. He's also a long-time resident of the area. Manning the shop with him is Sasha Siegel and Betty Chia, both of whom used to work at Origin . 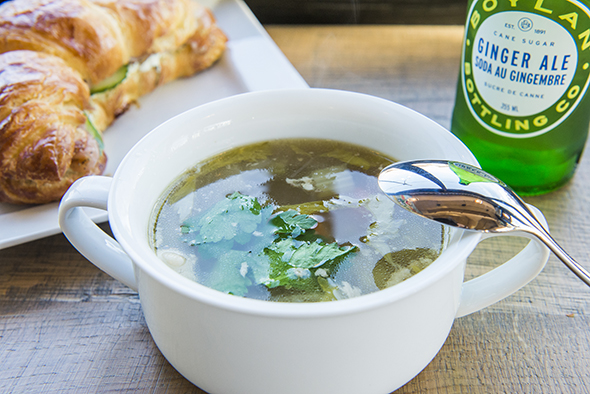 In need of a warm up, we order Bubbie's Chicken Soup ($4.95 for a small, $6.95 for a large), made with a recipe that comes from Muskovitch's grandma. The broth is packed with flavour as well as naturally-raised chicken leg meat and gemelli noodles. 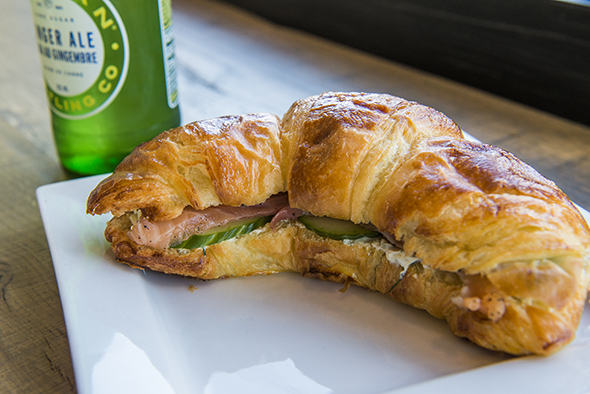 Next up, we devour the house-cured salmon croissant sandwich ($6.95). It's a great combination of flavours and textures with dill cream cheese, cucumbers and capers. 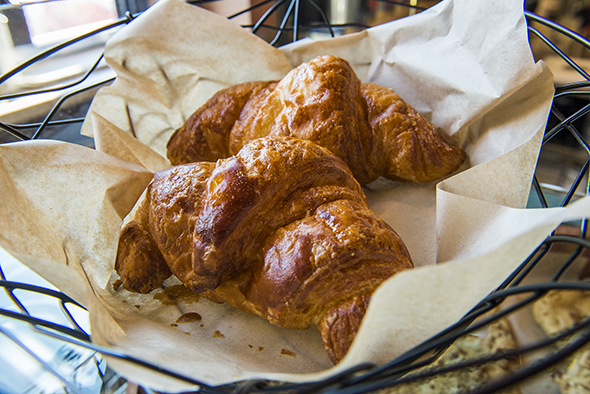 Croissants are made on-site using dough from Sweet Line Pastries . 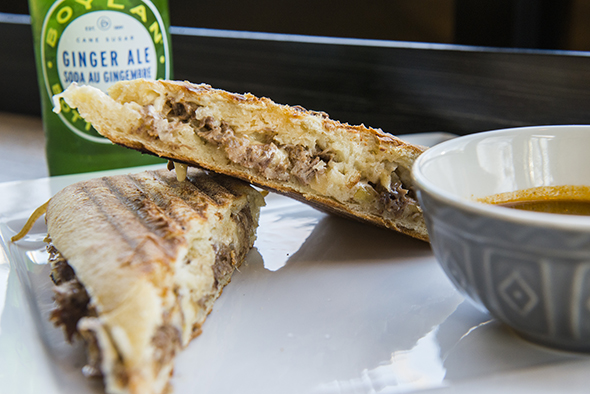 "You have to dip it into the gravy. It's mandatory," Siegel tells me before I take a bite. The gravy is superb, and the panini itself tastes fresh and has a nice crunch to it. 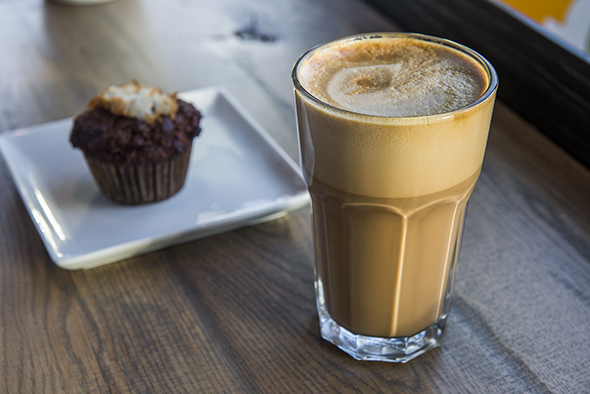 There's lots to drink here but I recommend a tall glass of Devil's Mocha ($4.25), a chocolate espresso drink made with simple syrup spiced with chili flakes. It's nice and smokey, and the spice pleasantly lingers for a while. 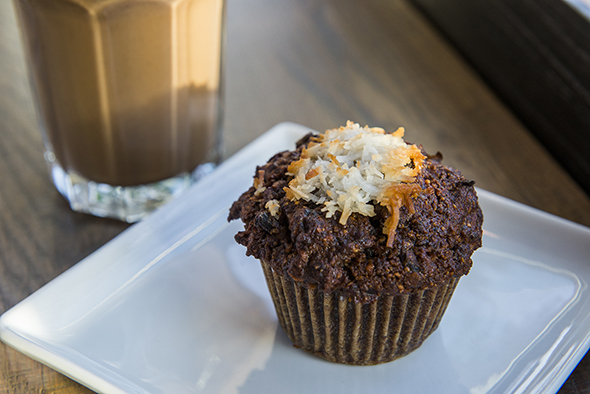 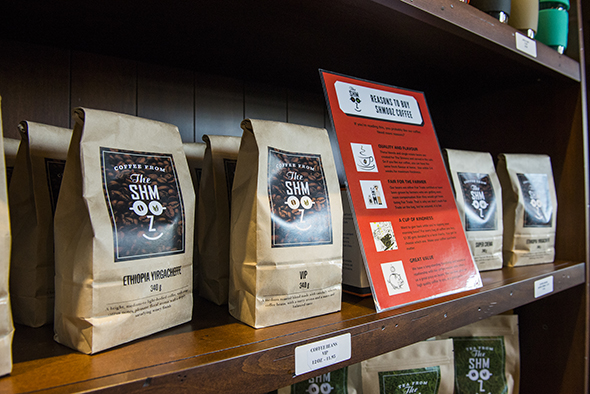 The coffee at The Shmooz is sourced from Quebec-based Cafe Vittoria. Espresso drinks are made using a Conti machine.

You can also purchase coffee beans to brew your own cup of joe at home. $1 of each bag bought goes to one of two charities: The Toronto Wildlife Centre or The Red Door Shelter. 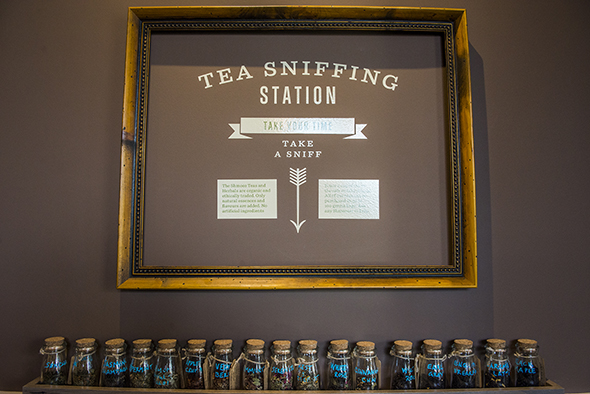 The cafe also sells organic Shanti teas. There's a tea sniffing station to help you decide between the 17 flavours. 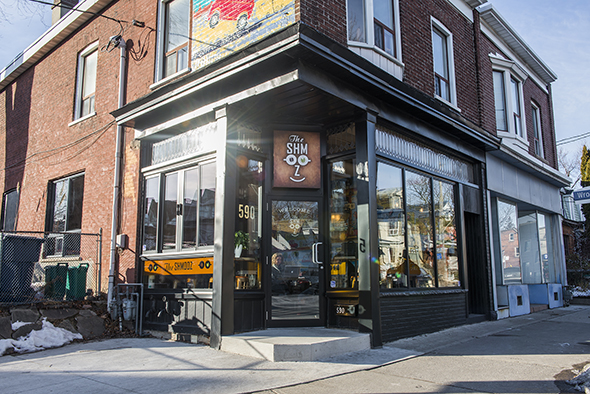