As some who know me well will attest to, I'm mildly obsessed with rotis. So it was with much anticipation that I recently ventured inside Kensington Market's Shai's Cafe to taste what someone had described to me as a roti worth trying .

The first thing you should know about the rotis here is that they're not full size. In fact, they're mini. They even call them mini rotis on the menu. They come in three varieties - goat, chicken and vegetarian ($3.00 each); and they're not made to order. The implication here is not only that they may not be as fresh as they could be; but also that the selection available at any given time is dependent on who's ordered what that day.

On this day I'm told that they only have one roti left - and that it's a veggie. Since I'm not much of a meat eater this sounds just fine to me. I place my order and grab a seat on Shai's eclectic back patio.

About five minutes later my roti arrives. It's small, toasted and comes with two dipping sauces - one savoury and the other with a bit of a spicy kick. (See photo at top) 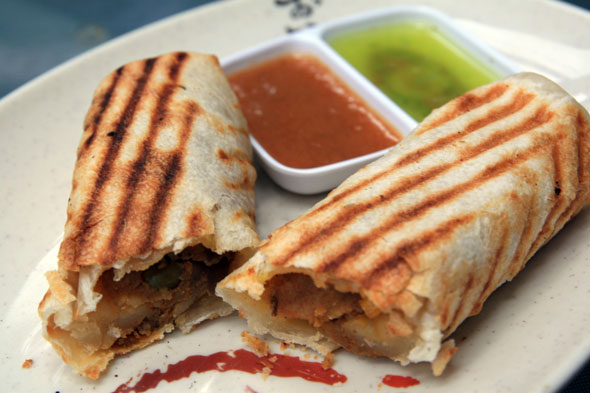 Inside are corn, peas, potato, beans and something that looks a little bit like, uh, chicken. Yep, it's chicken all right. I didn't actually realize this until about half way through which would have been disastrous if I was a strict vegetarian; but because I can appreciate a kitchen screw-up as much as the next guy I decided to let this one slide.

It's too bad though that the taste didn't make up for the mix-up. Overall, the roti was a bit on the dry side (although the dipping sauces helped) and too heavy on the potato and beans. The spice level was good though - hotter than my most recent roti meal at Reyanna's . But the moral of the story here is that mini or not, what's served here really shouldn't be called a roti. The creation resembles something closer to the mini burritos they used to sell at the long since shuttered Yellow Brick Road on Dupont.

A better option might be to explore the non-mini-roti side of the menu. Shai's Cafe also serves an all-day breakfast, breakfast burritos, soups, sandwiches, samosos, smoothies, espresso and a range of other coffee options. There's plenty of seating inside as well as the back patio. 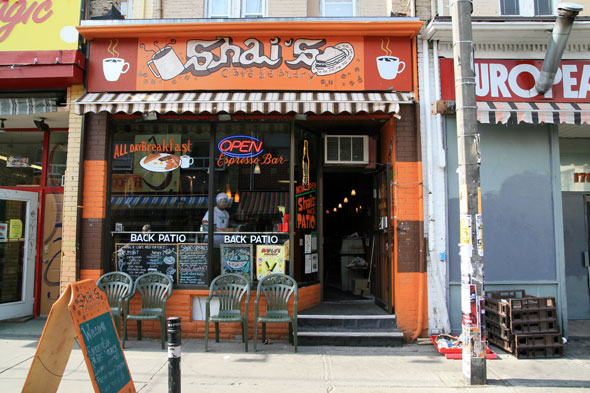