The Second Cup Coffee Co. at King and John, located in the heart of Toronto's Theatre District, is the first location in the Second Cup chain to receive a complete overhaul. The total redesign and rebranding of the café is the company's attempt to bring life to their floundering financial state, and to renew the Second Cup standing as Canada's elite coffee chain.

With the current proliferation of cafes and high-end coffee culture, it's hard to imagine The Second Cup as a forerunner, but I have first hand-experience of the impression it once made. 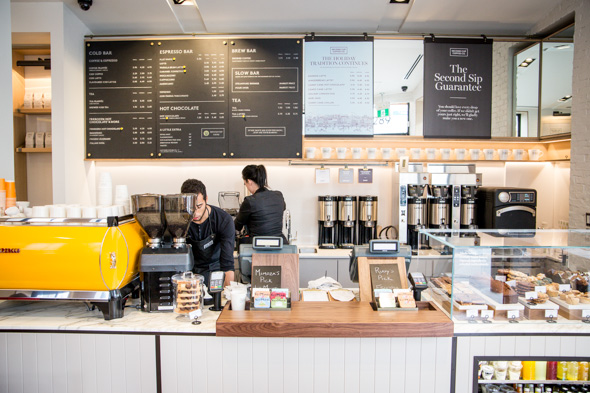 My first real job in my small town in Nova Scotia was at the Gourmet Cup. I thought it was terribly sophisticated at the time (it was the early nineties) with its brown laminate counter and jewel-toned accents, its Irish Cream and Noisette, its café au laits (no lattes yet), cappuccinos, and espressos (which we pronounced EX-presso). What I didn't know was all that la-de-da I was celebrating in my little town in Nova Scotia was just a rip on a fancy Ontario chain called The Second Cup. 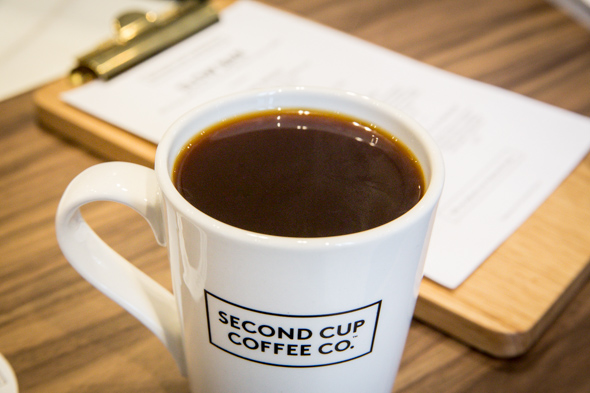 Fast forward 20 years and until just last week you would have seen much of the same, once sophisticated, now tired, look to the Canadian coffee chain: the same Irish cream scent would be the first thing you noticed when you walked in, the same wafting cup icon and brown and jewel tones, its status as 'fancy coffee' usurped by Starbucks and Tim Hortons in sales, and all those up-and coming indie cafes in cred. 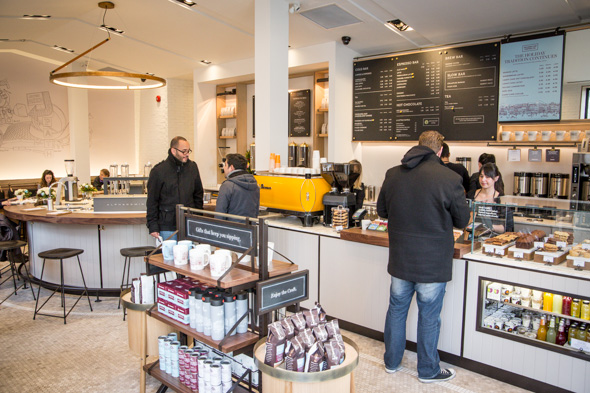 The Mississauga-based company isn't the only coffee company struggling to makes gains as coffee consumption is showing signs of capping, and growth slows in a heavily saturated market. Starbucks just recently opened a higher-end "reserve" store and roastery specializing in small-lot exclusive beans and high-tech brewing in Seattle-reportedly costing more than $20 million. 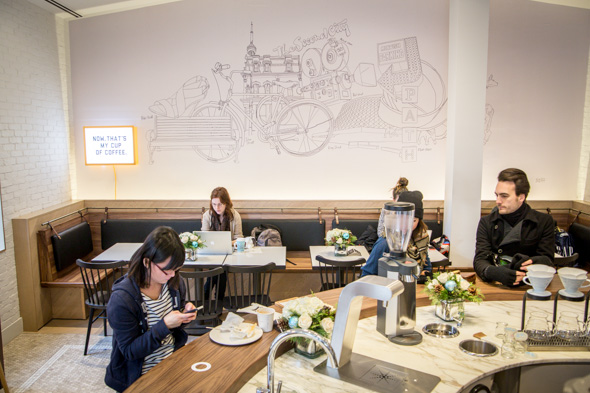 Here in Canada, Second Cup had been seeing financial losses for some time, and last February took on Alix Box, who held senior positions at Starbucks and Holt Renfrew, as new president and CEO. She's been aggressively trying to bring new life to the company ever since; if this new location's redesign is successful, all the franchises will see a revamp along these lines.

When I spoke with II by IV Design , the design group behind the new Second Cup Coffee Co., they mentioned the research tour a team took of the small boutique coffee shops in hotbed locations like New York, Seattle, Portland, San Francisco and right here in Toronto, where they took note of the details of the emerging cafe culture. 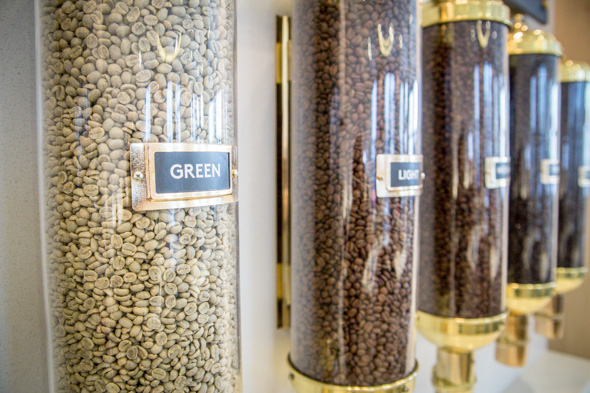 They responded to the new blend of art and science and the focus on authenticity. The results? The new Second Cup Coffee Co. has a lot of white marble, cream tiles, glass, white oak and walnut, a variety of seating (standing, perching, lounging). In an attempt to reflect the individuality of the franchises and the franchise operators, each location would have a corresponding mural, and the names of the owners on the door. 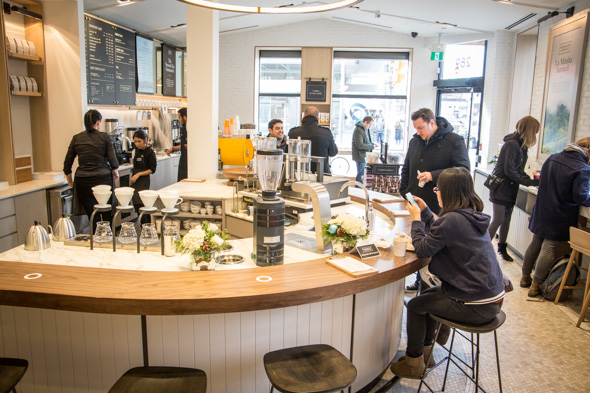 In the centre is a horseshoe-shaped slow bar with a white porcelain pour over station and the crème de la crème - the Alpha dominche steampunk brewer , the first of its kind in Canada. They use a bright yellow La Marzocco machine. 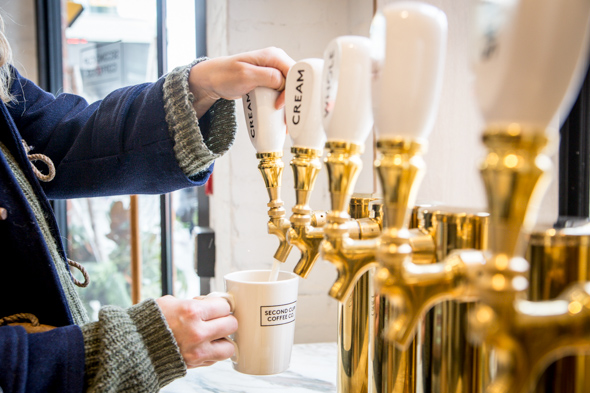 Cream, milk and water come from a tap station (too fast, I might add) and there has been a food menu change - they now feature tarts ($2.75), mini cheesecakes ($4.25), banana bread ($2.75) and scones ($2.50). Gone are the flavoured coffees, replaced by new varieties of beans, but not all the babies have been tossed with the bath water; favourites like the Frrrozen Hot Chocolate and Caramel Corretto remain. 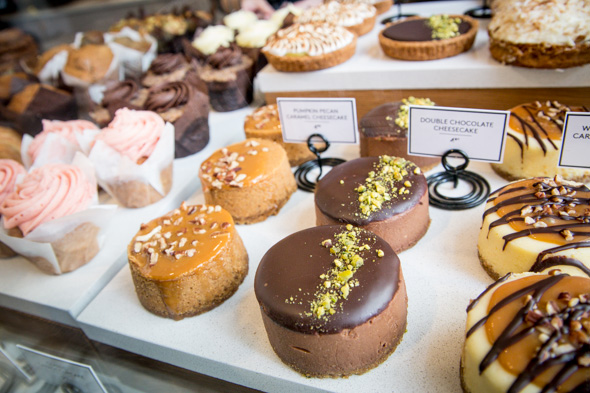 The space is an improvement - slick yet comfortable, and nice to look at, and I like the nod to the neighborhood with the new mural. But it reminded me of my old days at the Gourmet Cup, but now with the Second Cup in our old posturing position, chasing the proverbial "cool" in effort to secure the proverbial buck. The experience tried to strike at the efforts made by independents ( Pilot Roasters comes to mind) who function with far less money, and dare I say, far more heart.

Where they put their money to good use is in the new wireless charging stations all over the café. The panic of a dead battery, particularly for a wandering tourist, is immediately remedied with these stations, and the shop on that alone could become an oasis for people. 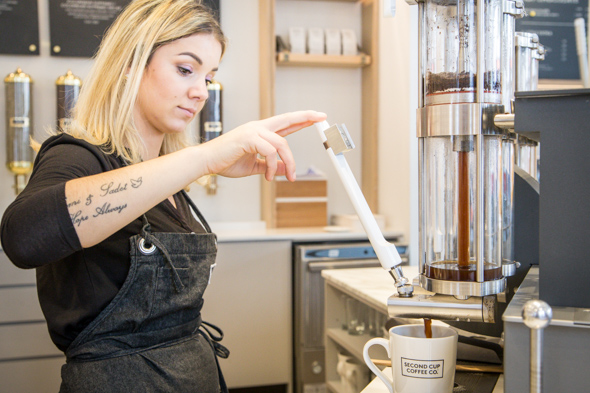 I also witnessed several brand-loyal customers at the Second Cup stepping out of their comfort zone and excitedly participating in the new coffee brewing methods and varietals, and that gave me hope. That education on the benefits of smaller producers, on slower consumption, on the reduction of harsh chemicals can function on many levels. Who says an old dog can't learn new tricks? 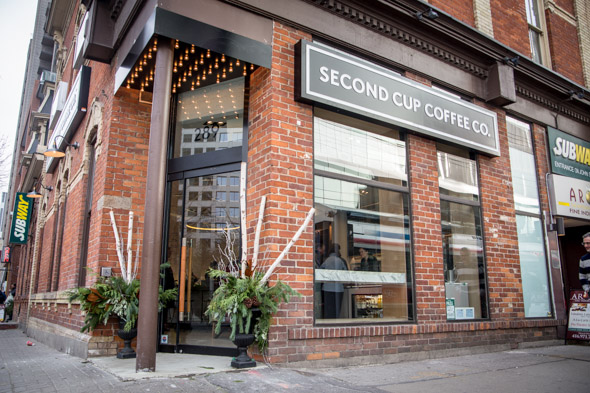