ODIN is a Corktown spot that's more than just a simple cafe. Rather, it's a hybrid space that slings out espresso, cocktails, snacks and craft beer.

It's a concept straight from Europe, says co-owner Patrick Tu. He and Tom Junek also run Thor Espresso Bar at Bathurst and Niagara. Both mythologically named outposts marry Scandinavian-inspired design with high-quality coffee. But now you can add a side of booze to your latte. 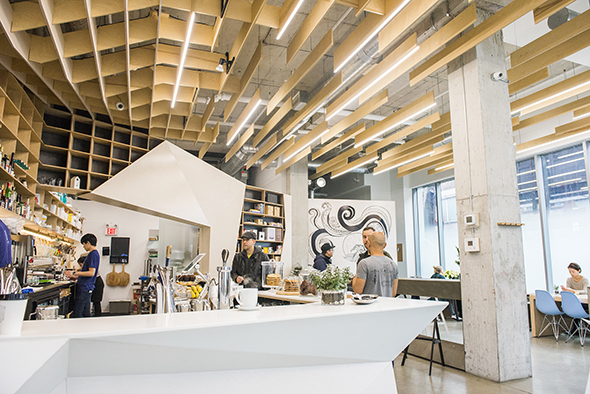 Caffeine aside, ODIN is visually striking; it doesn't feel like you're hanging out at the base of condo. Local firm Phaedrus designed the airy space, which features natural tones, hanging wooden slats and a white corian and Baltic birch bar. Tu says it's modelled after an iceberg. There's also a black-and-white mural by Toronto artist Tara Niewiadomski.

There's plenty of seating, whether you choose to perch on a Konstantin Grcic stool or want to relax in a light blue Eames side chair. When I visit on a rainy Sunday morning, a few enterprising individuals are already hunched over their laptops, some of whom are clearly taking advantage of the easy-to-reach outlets. 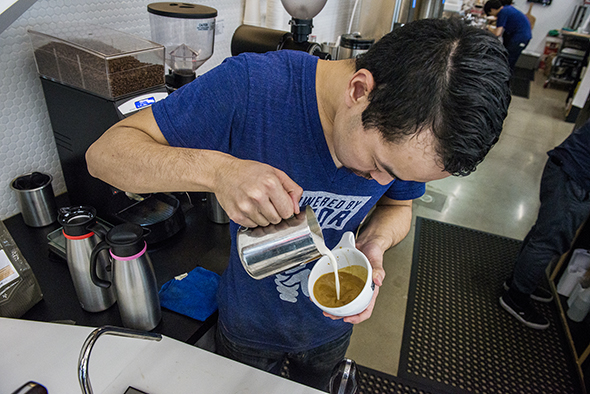 They're also there for the coffee. I try a flat white ($3.57) made with Pilot beans. Like many other Toronto cafes, ODIN uses Big Bro as its primary espresso blend. Baristas wearing "I heart ODIN" and "Powered by Thor" shirts craft beverages on a Modbar, a machine that's mostly hidden beneath the counter.

"When someone comes in, I don't want them to go, 'oh cafĂŠ.' It's more seamless," says Tu, showing me how the Modbar resembles a beer tap. Meanwhile, the real beer taps are at the other side of the bar. 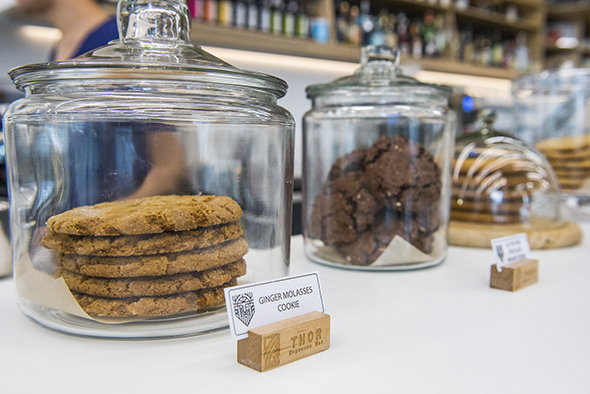 Along with the drinks, there's a small menu that goes beyond your basic coffee shop scones, cookies and muffins. All of these baked goods are, however, made in house, except for the empanadas from Etobicoke's Empanada Company . 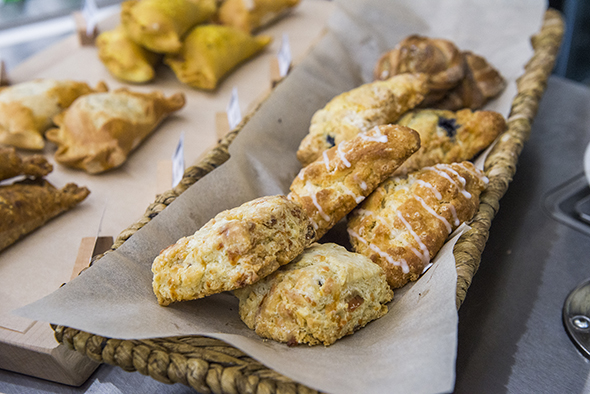 Tu says the menu isn't Scandinavian; rather, it's based on what he and his team like to eat. 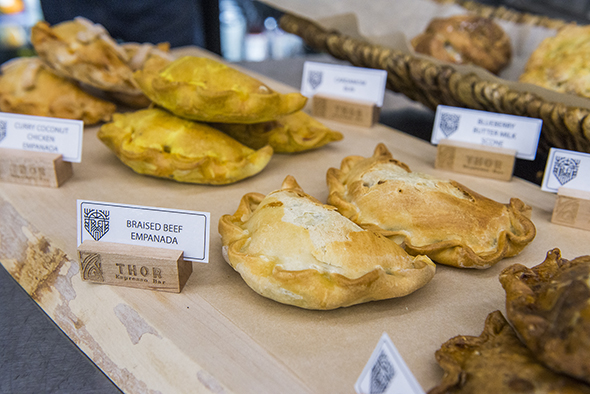 There are hearty snacks available at all times of the day, including special brunch items on weekends. 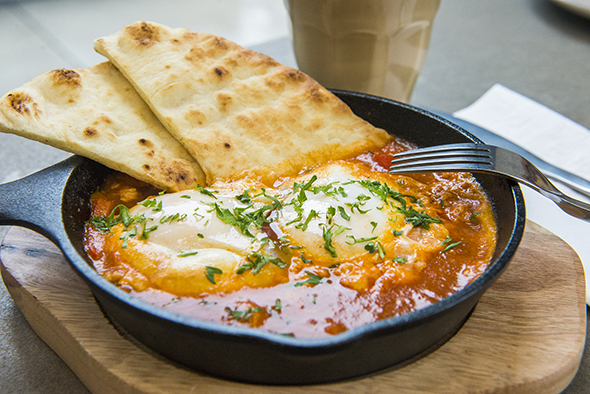 Since I'm there around brunch-o-clock, I get Shakshuka. The Middle Eastern dish comes out bubbling in a small cast-iron skillet. The red pepper and tomato sauce has a nice bite to it, but the eggs are a little too runny for my liking. 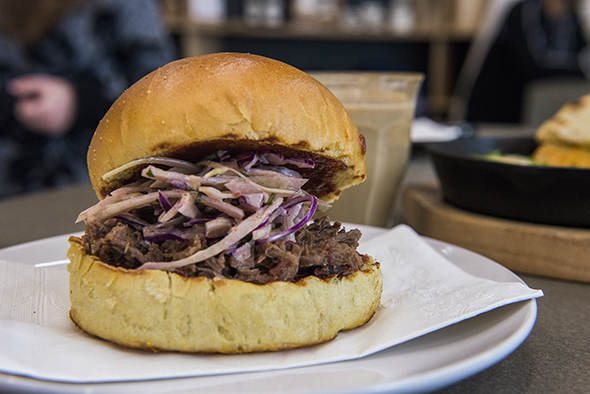 A beef brisket sandwich ($7.80) features slow-cooked meat from Uncle Smoke piled on a brioche bun with St. Louis-style barbeque sauce and purple cabbage and jalapeno slaw. The sweet BBQ sauce pairs nicely with the spicy slaw and this small sandwich ends up keeping me full until dinner time. 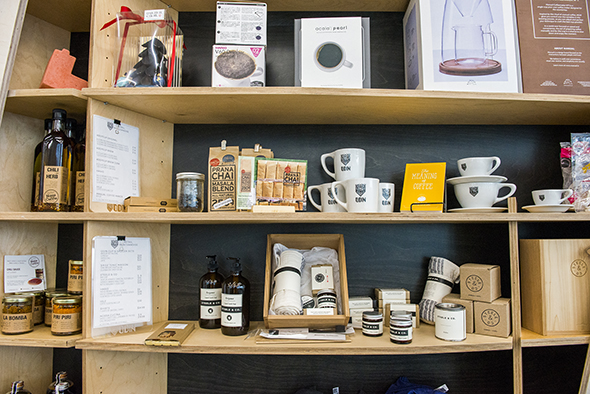 Along with the food and drink, there's an assortment of items for sale, including the aforementioned ODIN t-shirts ($24.99), ODIN cups and saucers ($22-$25) and Nossa Cucina sauces. 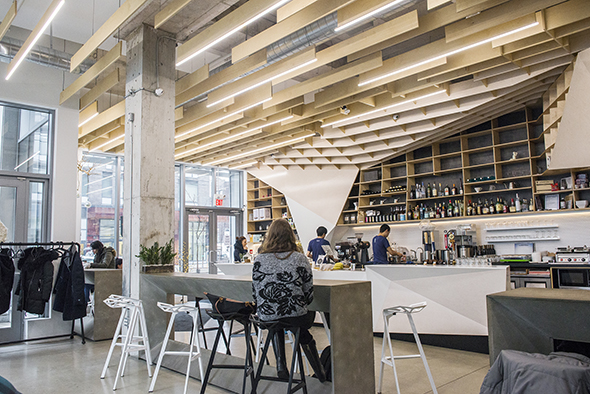 In the warmer months, you can also look forward to drinking and dining al fresco on the street-side patio. 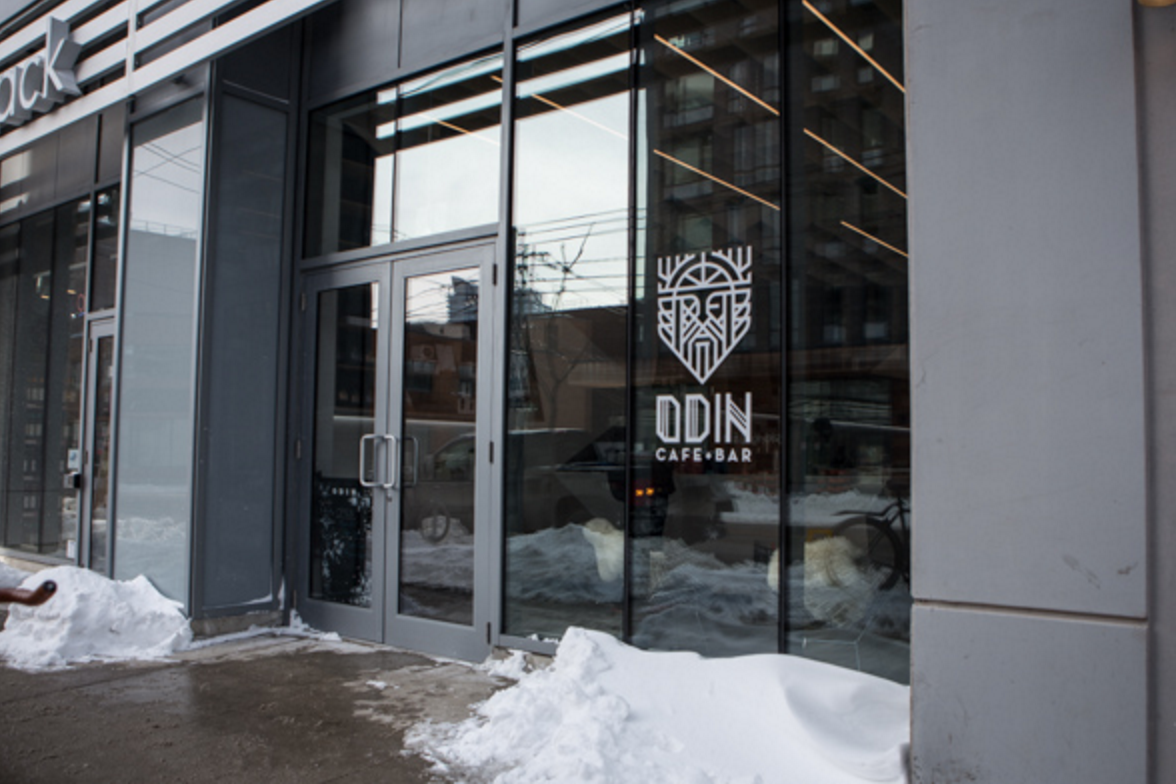