Madras Kaapi is a South Indian coffee house in Toronto specializing in frothy cups of kaapi, traditionally made and blended with chicory root.

Owners Shilpa Kotamarthi and Aditya Srivathsan were inspired by their Sunday brunches – that always included kaapi made with beans sent over from family in India – to bring their coffee of choice to Canada. 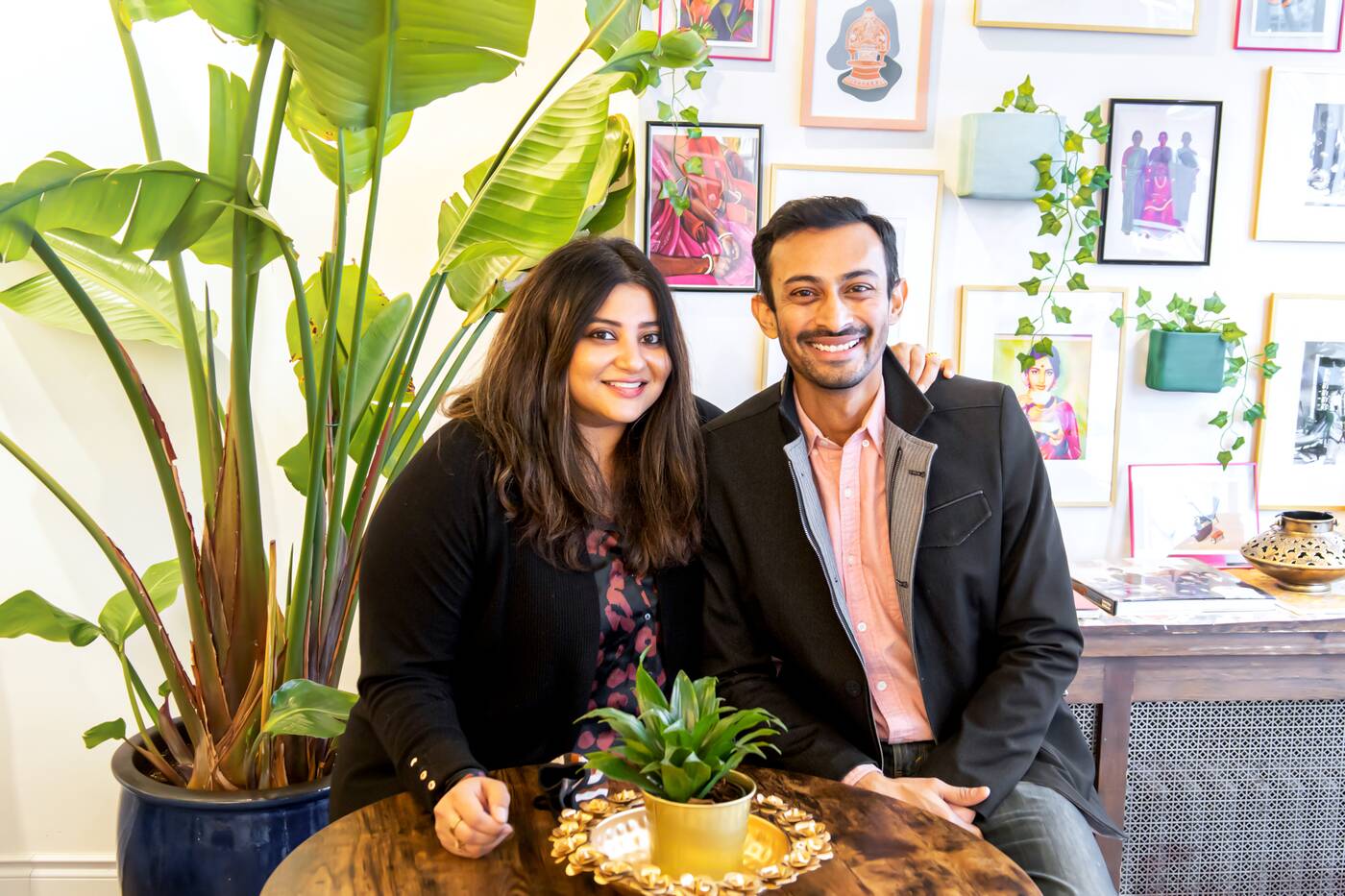 With both of them still working in fintech, the couple started selling their beans online in 2016 after finding a roaster in Montreal (where they were living at the time) to make kaapi-ready coffee from green beans imported from the Palani Hills in India.

Srivathsan got a job offer in Toronto bringing them to the city in 2019 and good turnouts to their pop-ups at 6×8 Market and Kensington Flea Market in the summer pushed them to open the cafe on College. 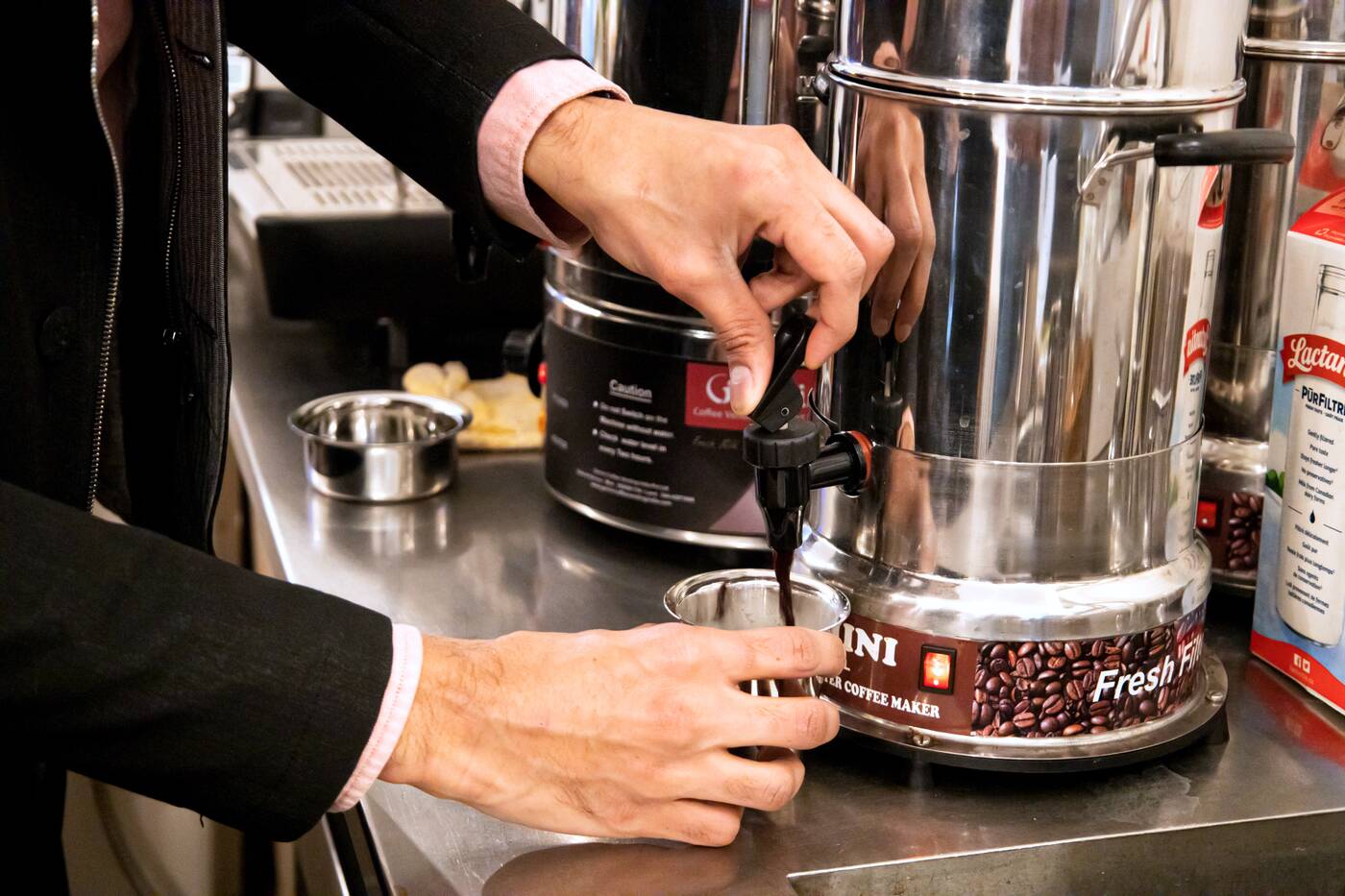 The coffee beans are still roasted in small batches in Montreal, though eventually, Kotamarthi and Srivathsan plan to roast the South Indian beans themselves right in the cafe. 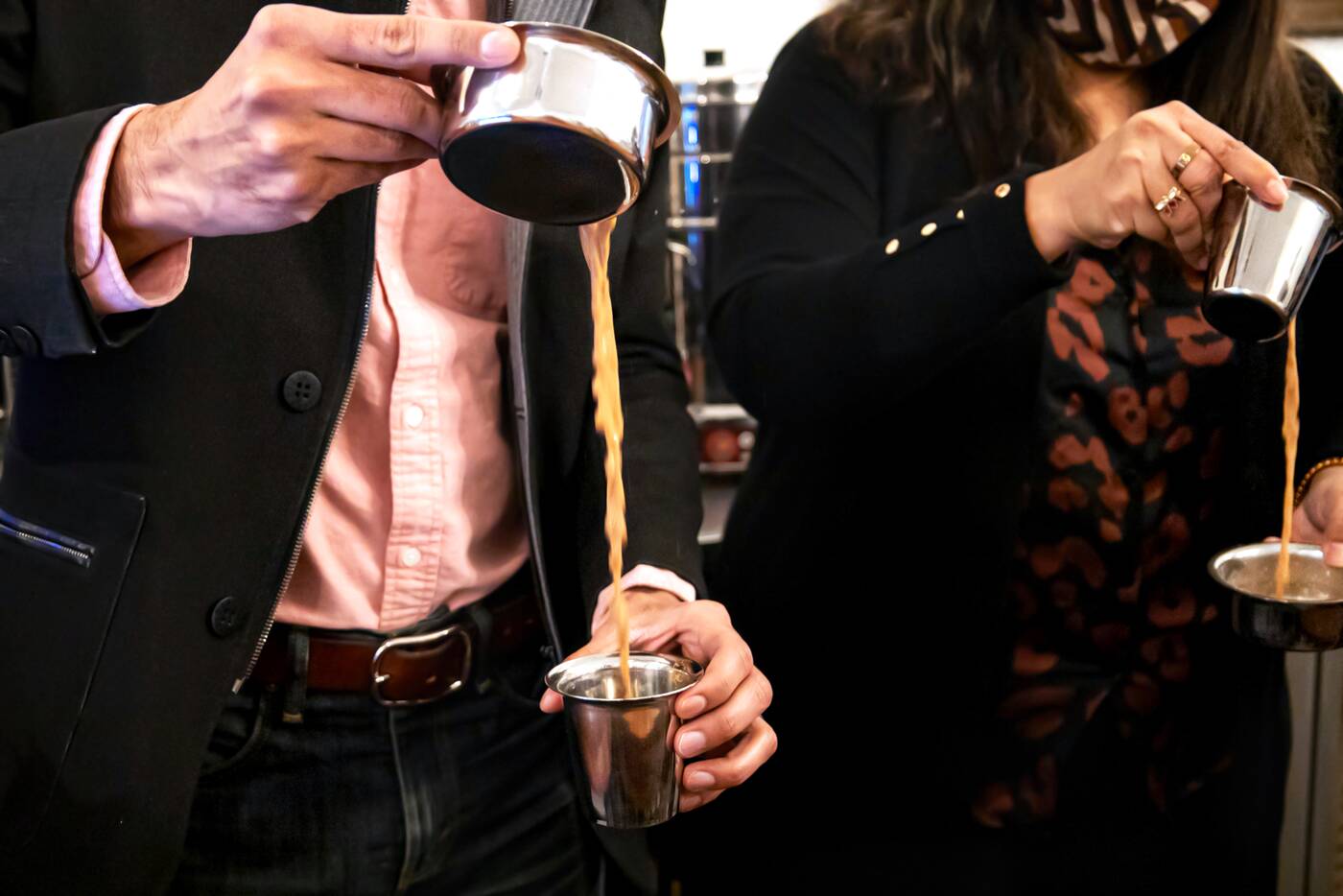 Kaapi is made with a decoction filter, which brews a rich, thick concentrate. Hot milk is then added and it's aerated by pouring it back and forth with a davara and a tumbler. 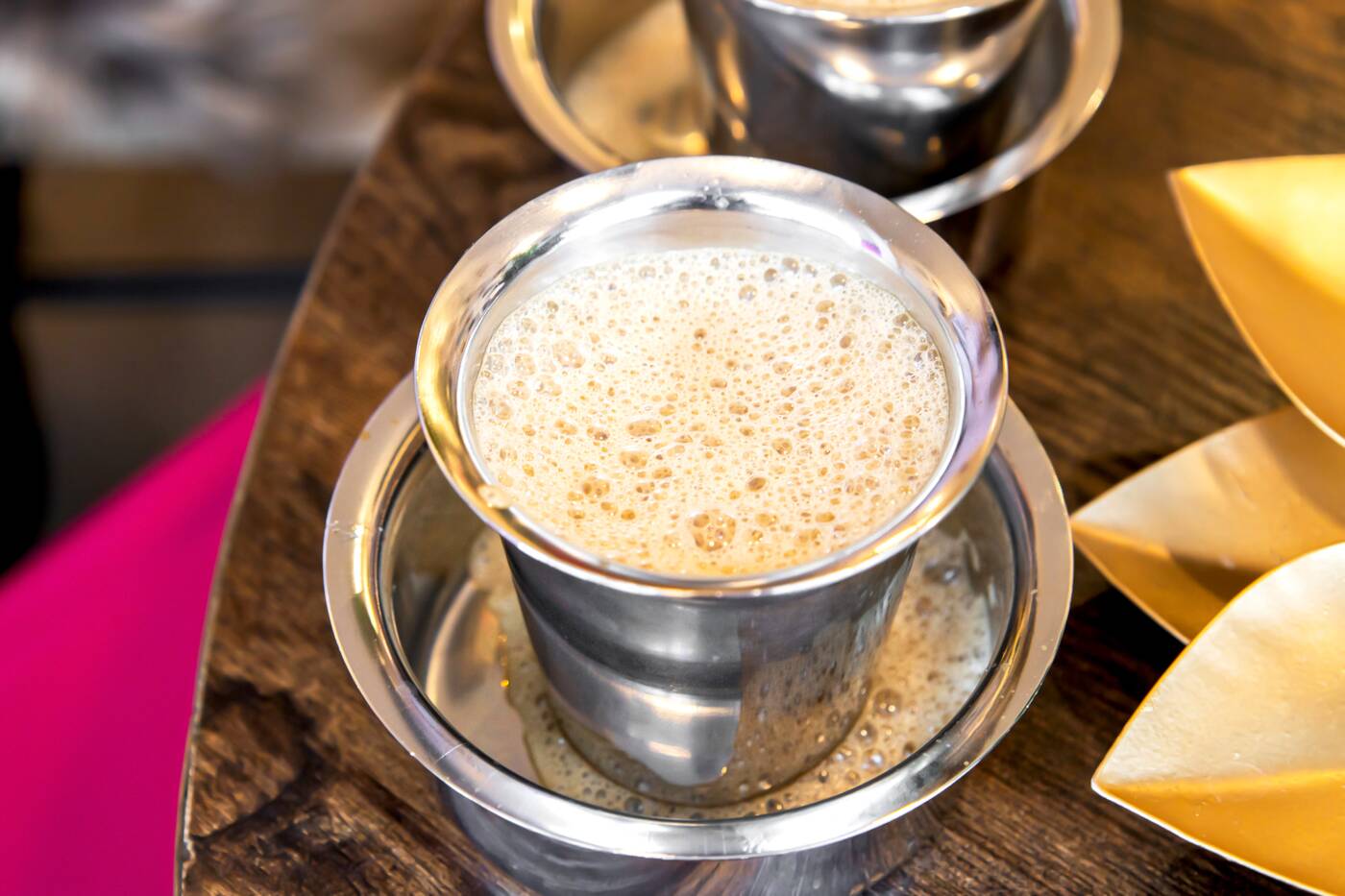 A few impressive long-distanced pours make for a steaming, creamy cup. Chicory root adds nutty notes into every sip and Jaggery, their unrefined cane sugar of choice, smoothens out the strong brew. 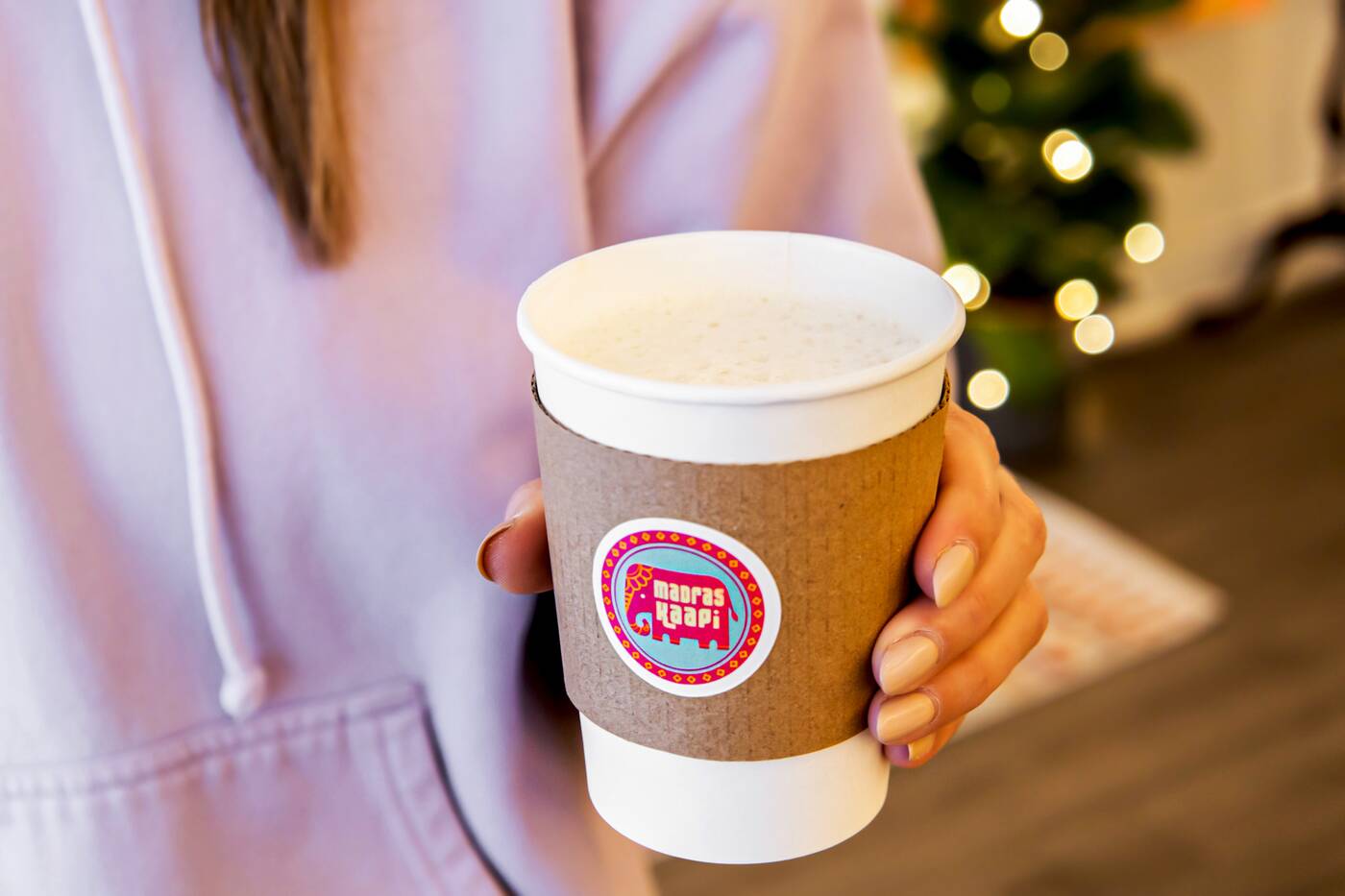 You can also get your kaapi as a latte or mocha, or order an Indian malt drink called horlicks ($4). The hot milk stands in as a caramel, decaf substitute to coffee if you've already had enough caffeine for the day. 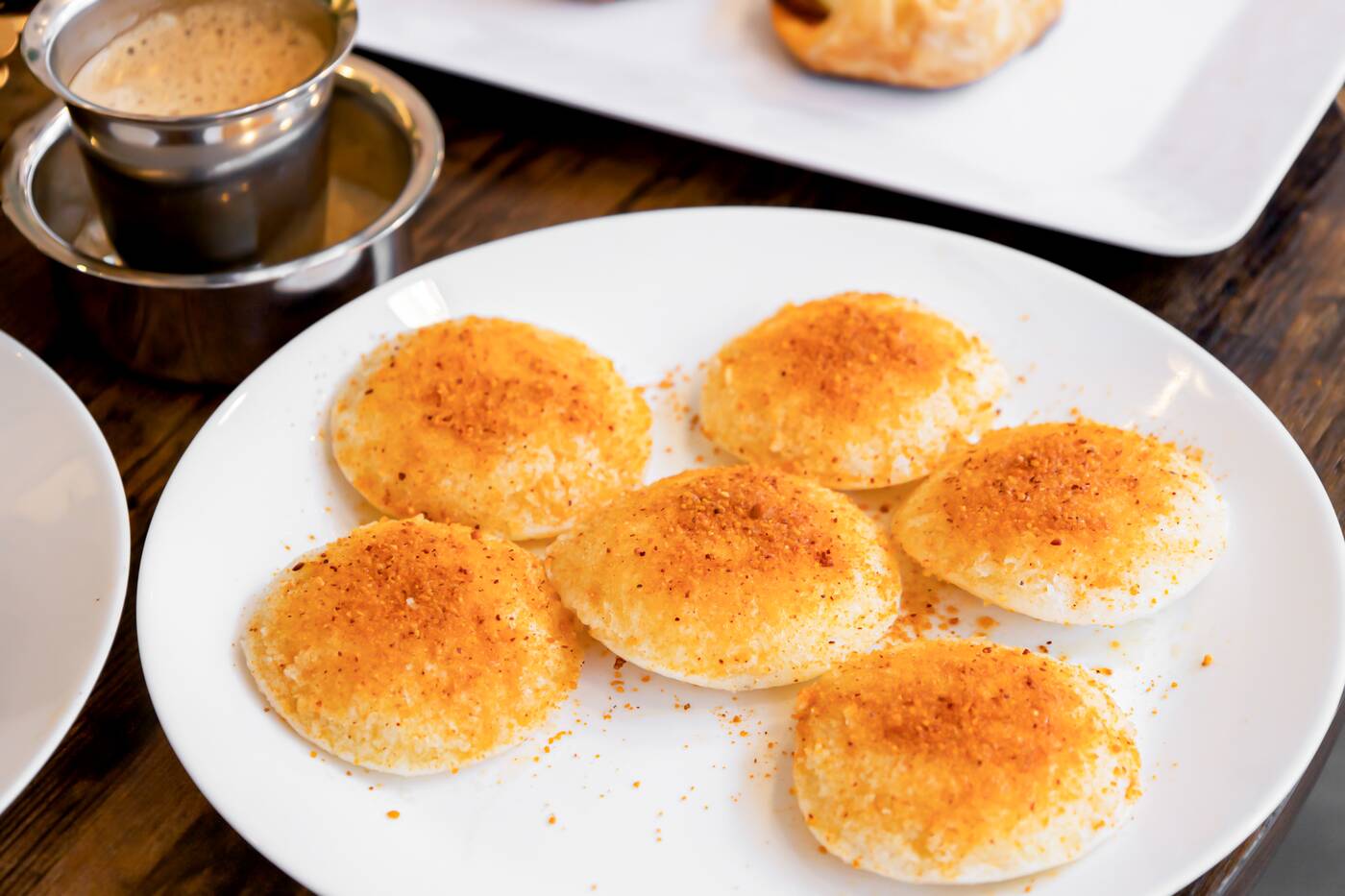 Though coffee is their strong suit, there's still plenty of Indian snacks behind the counter. Supplied by a family friend, Idly ($7.50) are savoury, steamed rice cakes made with fermented black lentils. 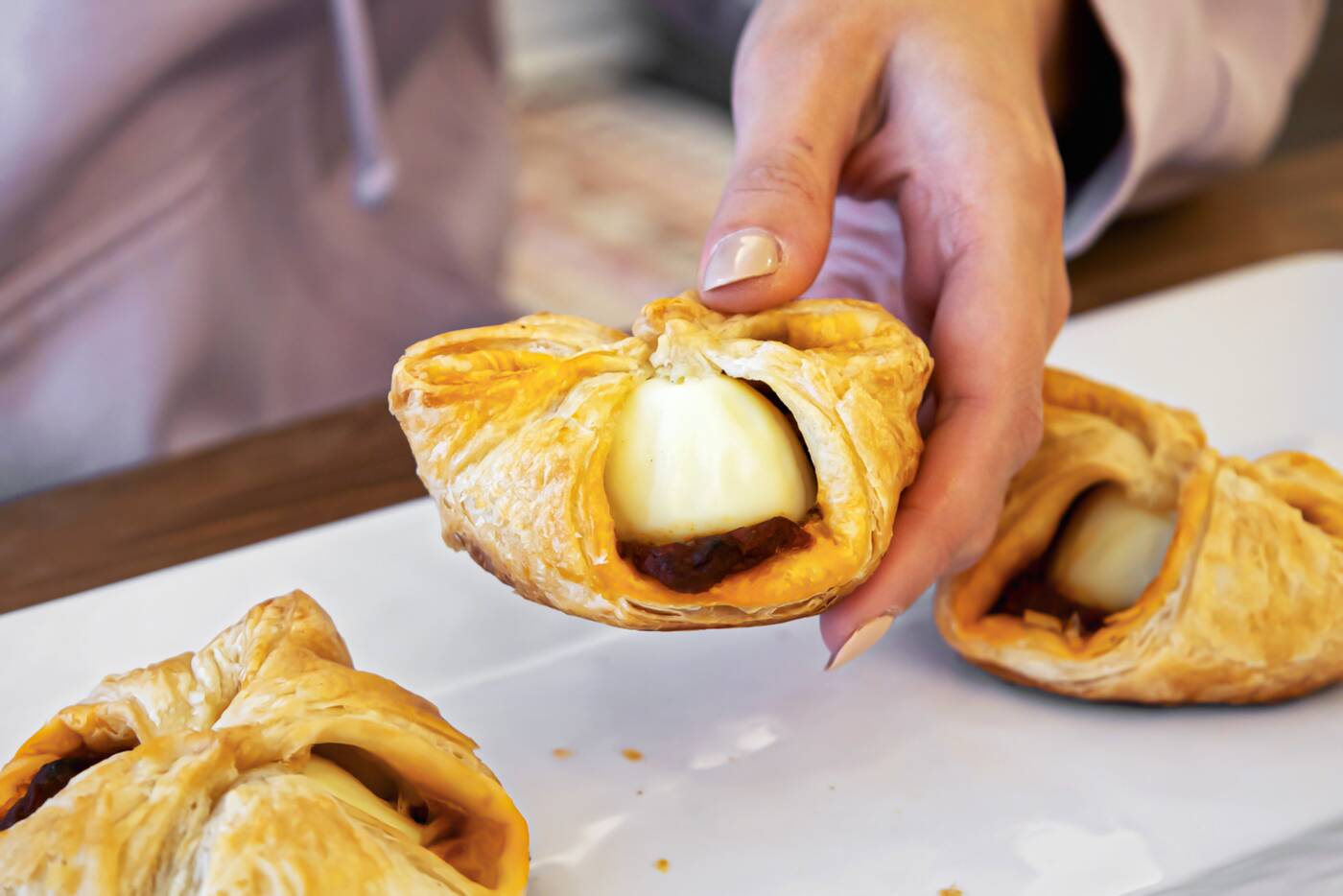 Butter and Spice prepare the puff pastry for the puffs ($5.50) and the filling is made by Kotamarthi. A hard-boiled egg and spiced tomato-onion mixture make up the egg puff, a wildly popular pastry in coffee shops around Tamil Nadu. 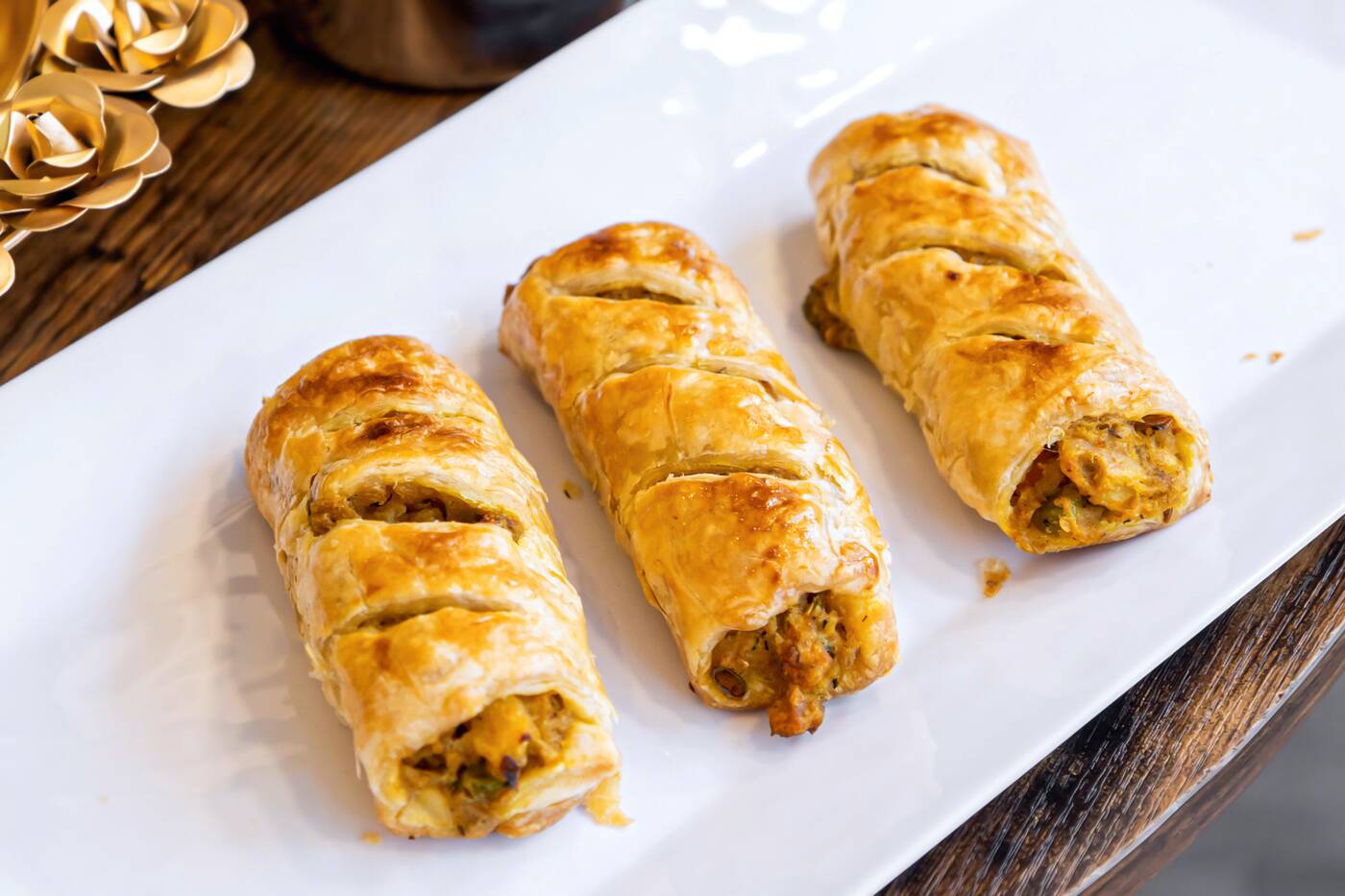 Think of the veggie puffs as a rectangular-shaped samosa with a much flakier, more delicate crust. 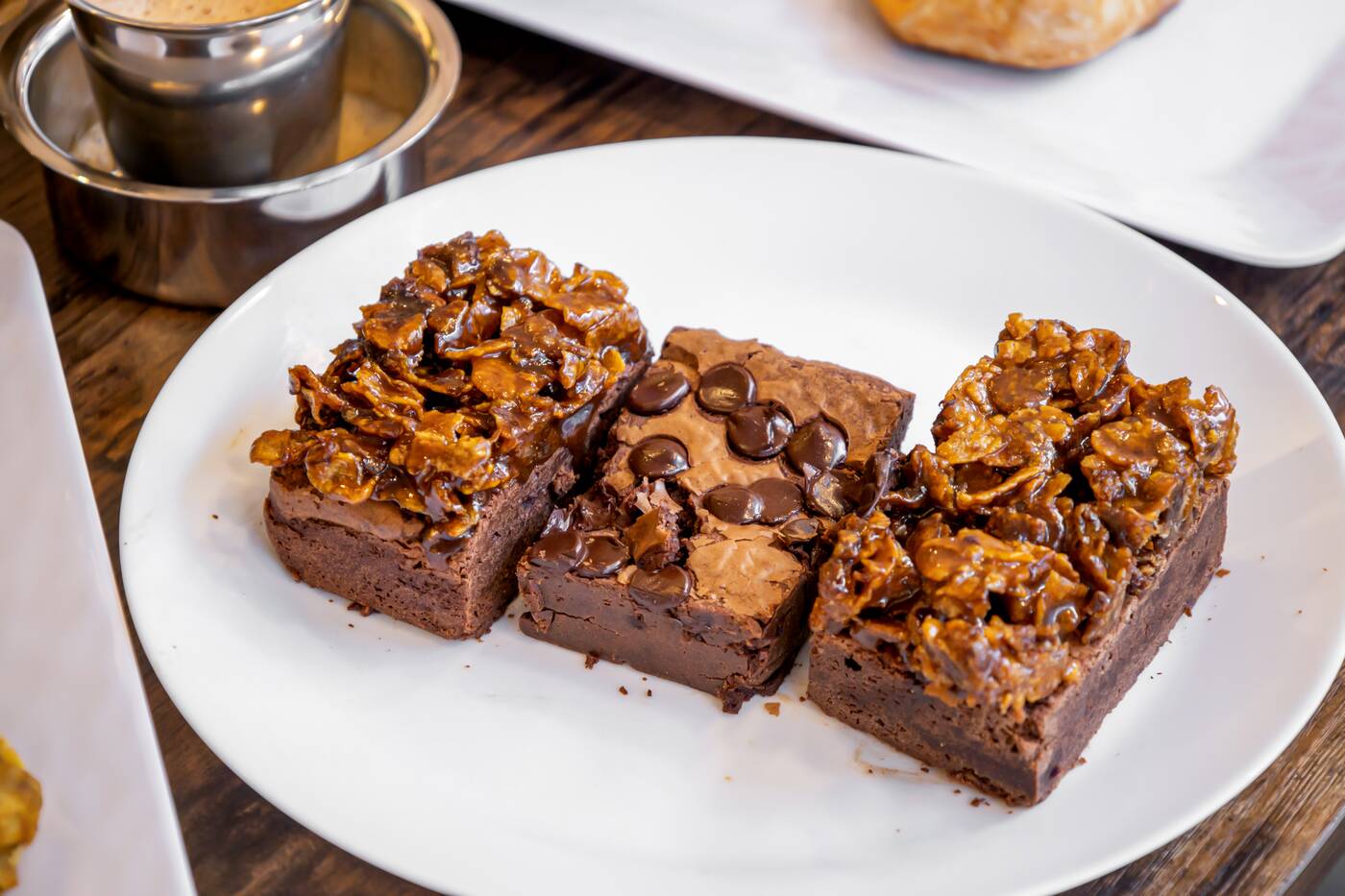 If sweet is what best satisfies on the side of a milky coffee, go for the brownies also by Butter and Spice ($4.50). One is classic chocolate with big chocolate chips, another is topped with crunchy cereal. 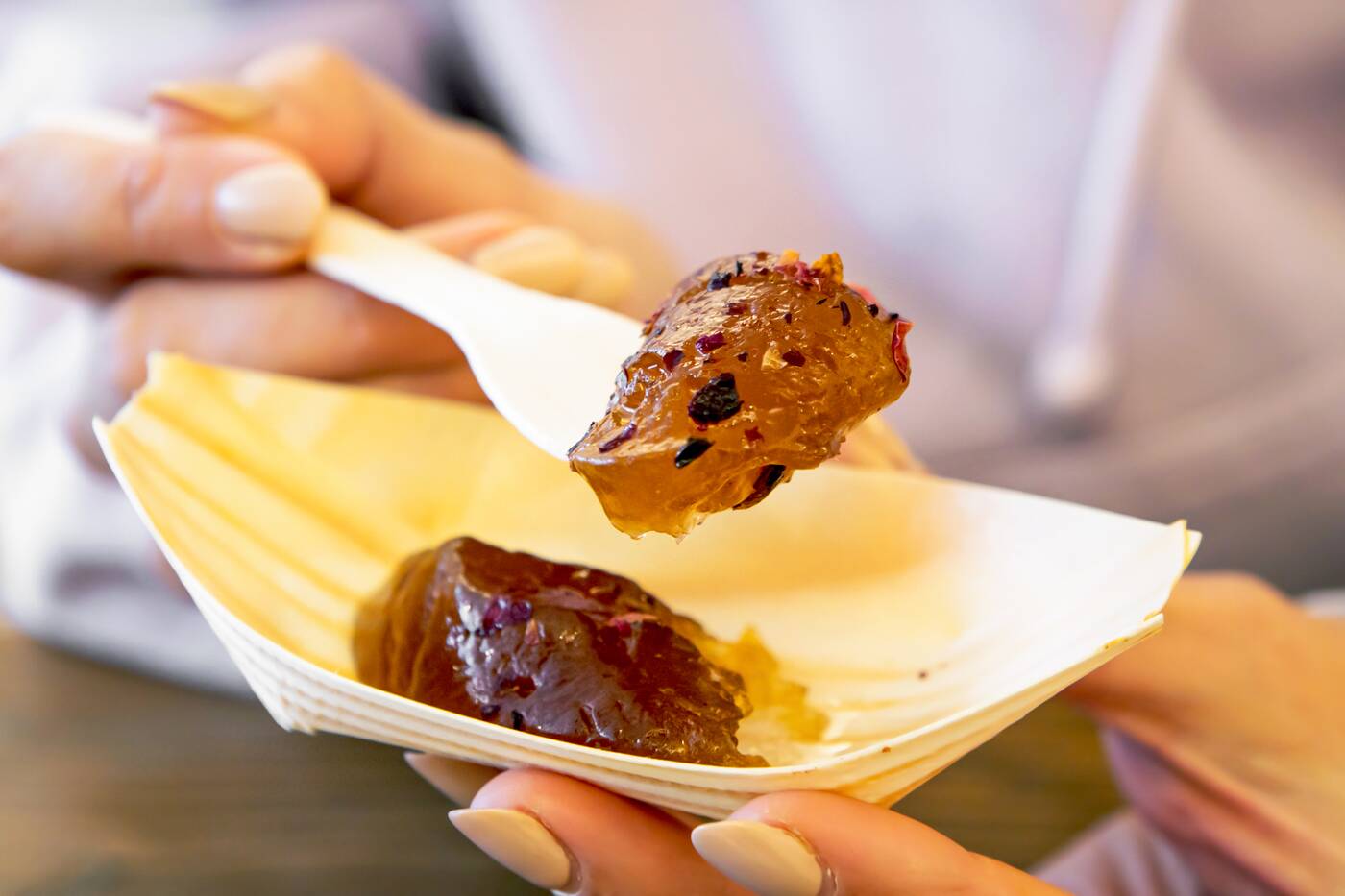 Tirunelveli halwa ($4) is named after the South Indian city that's famous for this sweet made with milk extracted from wheat berries, sugar and ghee. The jelly-like texture has that special melt-on-your-tongue quality. 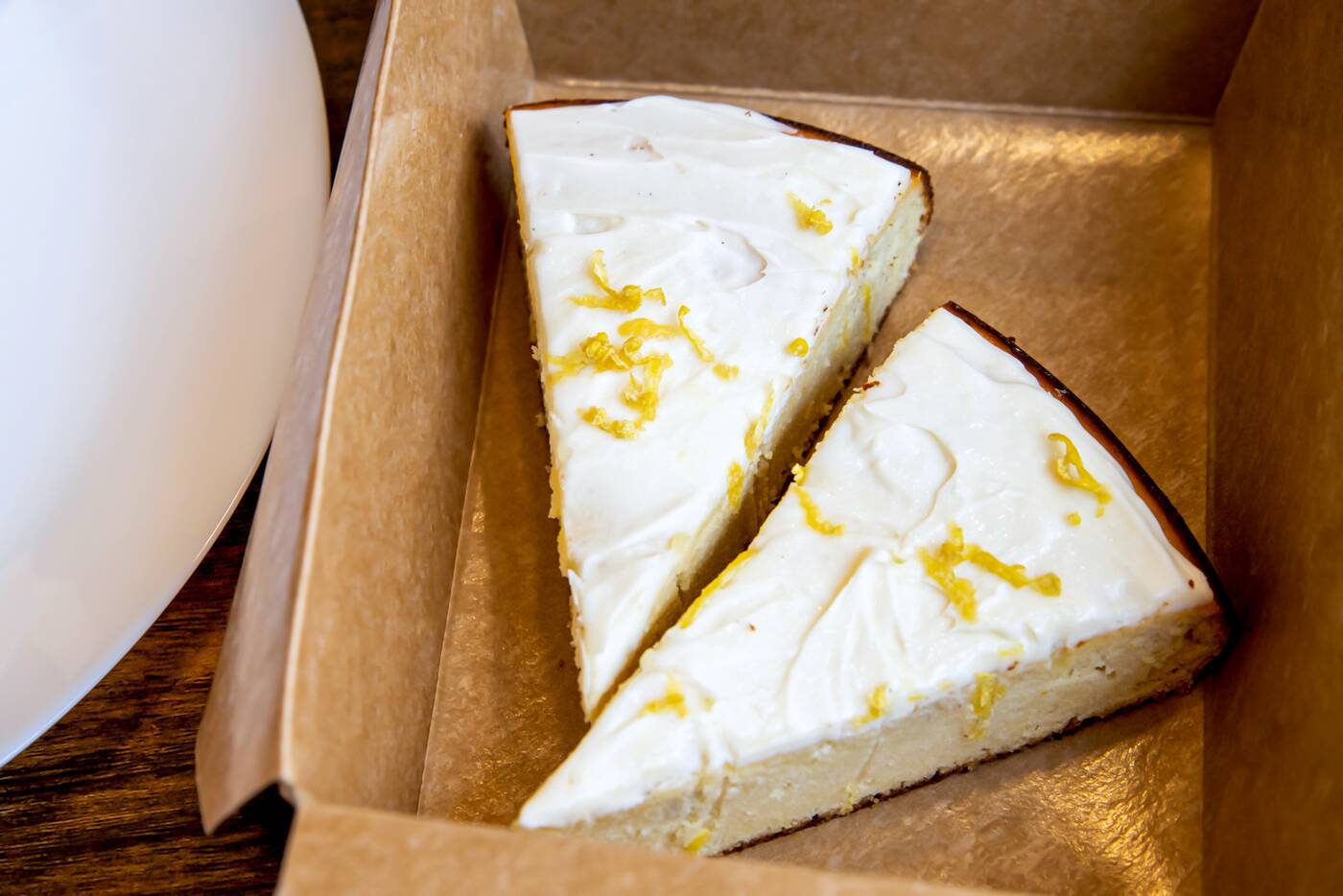 Almond flour cakes like lemon chai and chocolate rose ($4.50) are made by local baker The Ground Almond. 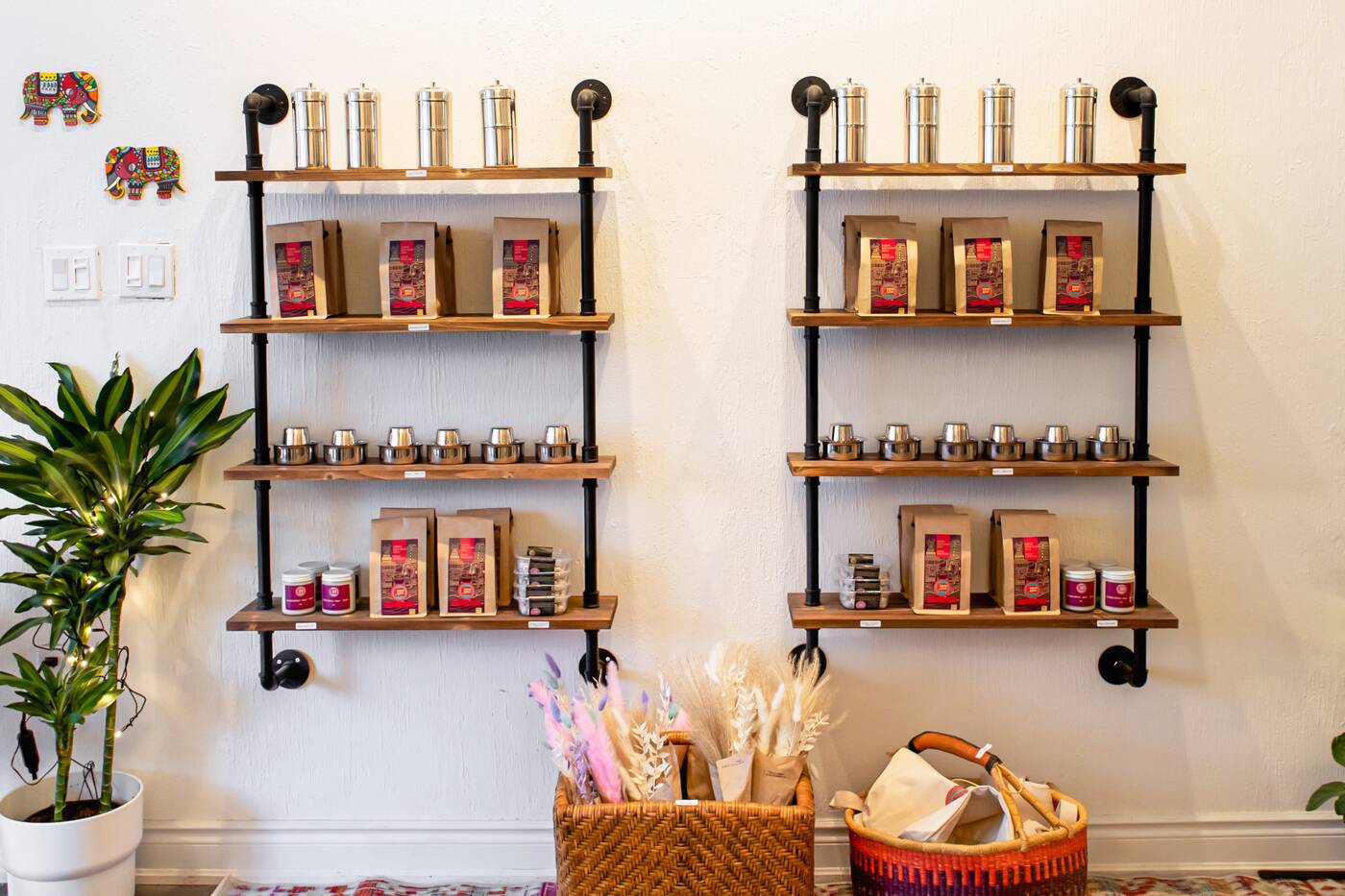 Bags of their coffee, as well as stainless steel filters, davaras and tumblers will help you out with your new-found kaapi addiction. Dried flowers from Unbloomed are also available in Madras Kaapi's colours: pink and teal. 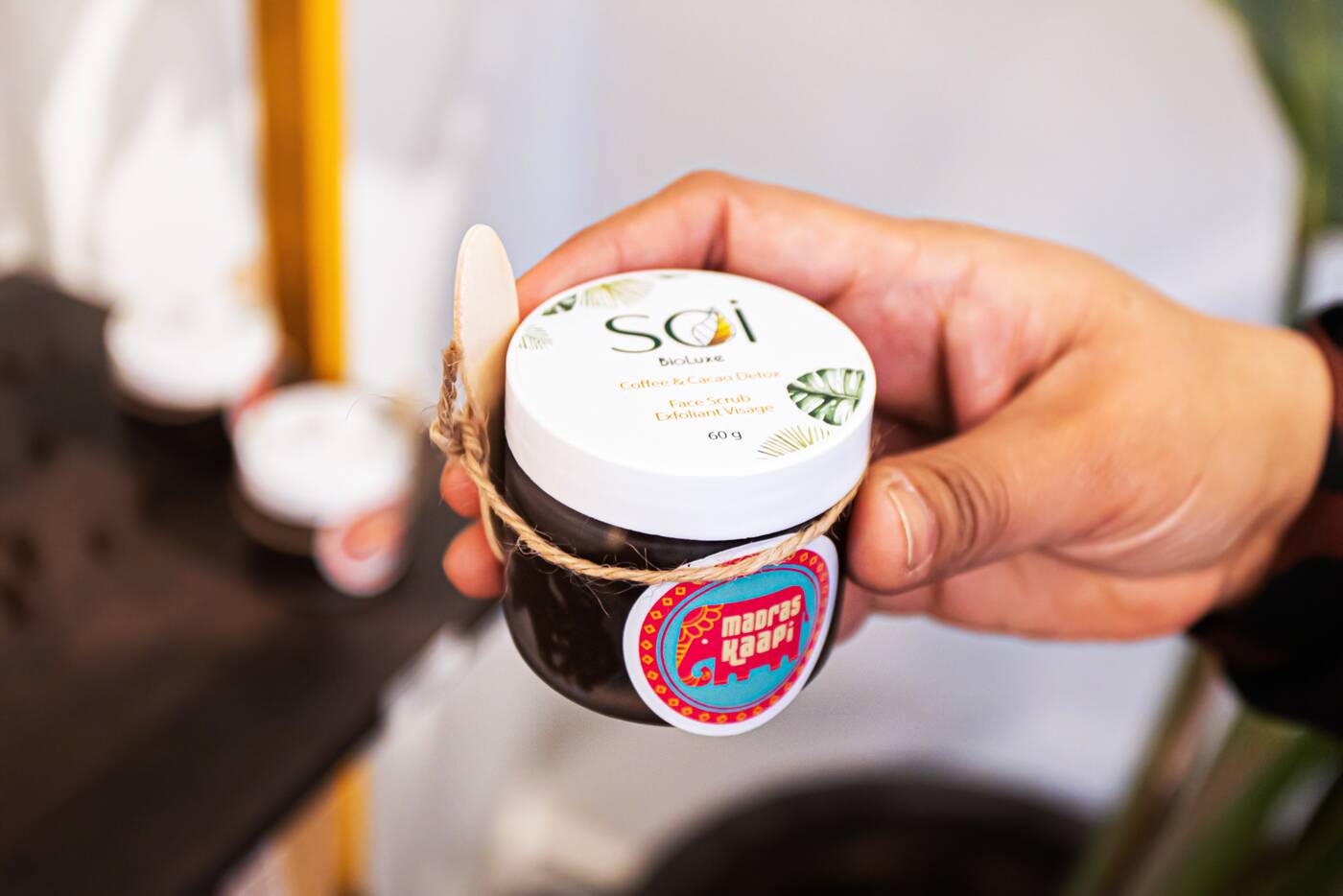 Chicory coffee, milk and sugar candles are also hand poured by Koth Candles while an exfoliant face scrub from Soi BioLuxe gives their leftover coffee grind a second use. 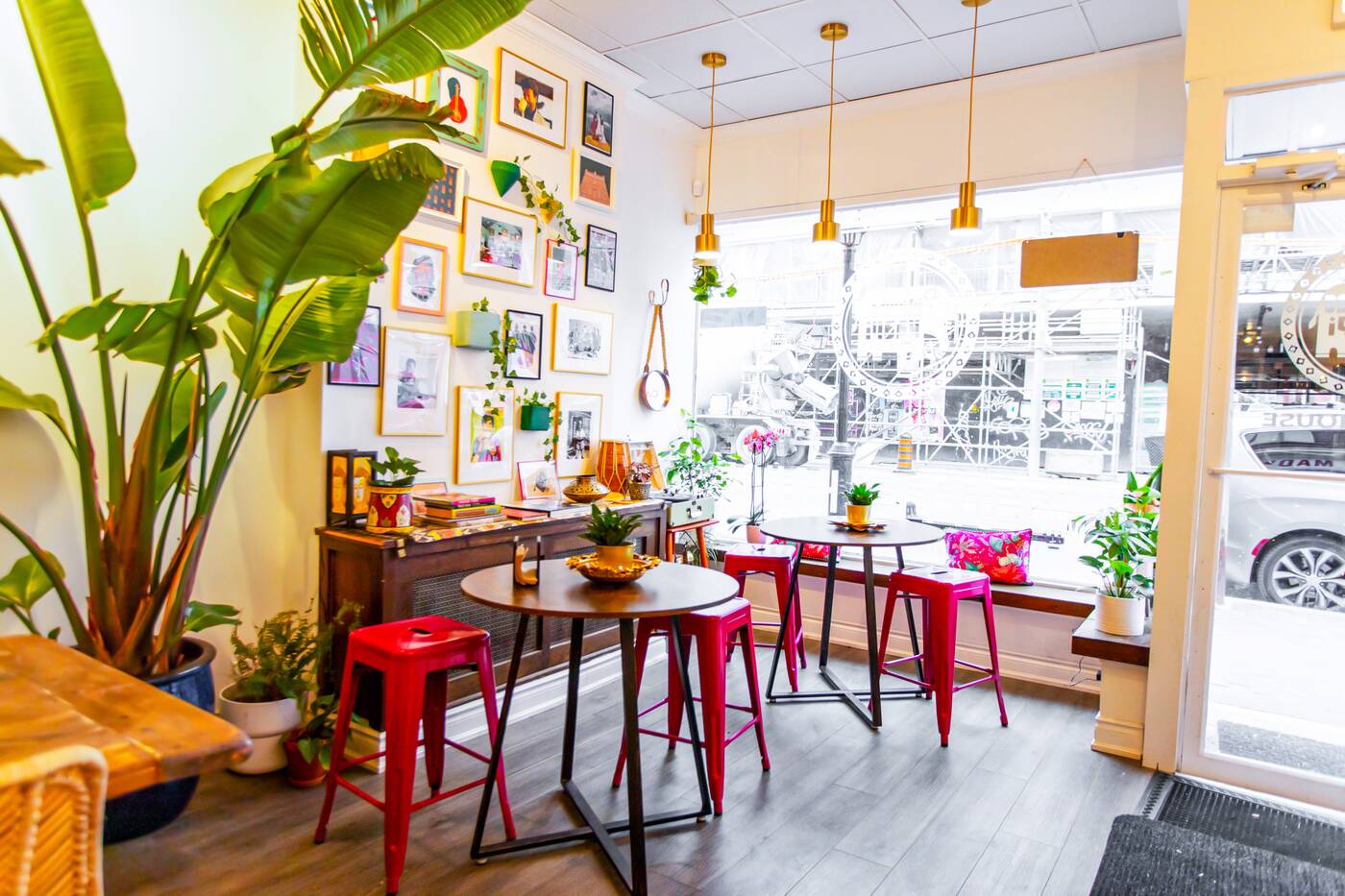 Kotamarthi, who quit her marketing analytics gig to focus on Madras Kaapi, designed the space herself. The walls hold work by Toronto artists along with other prints from India. Urilis, a typical piece of decor in South Indian homes, are table centrepieces. 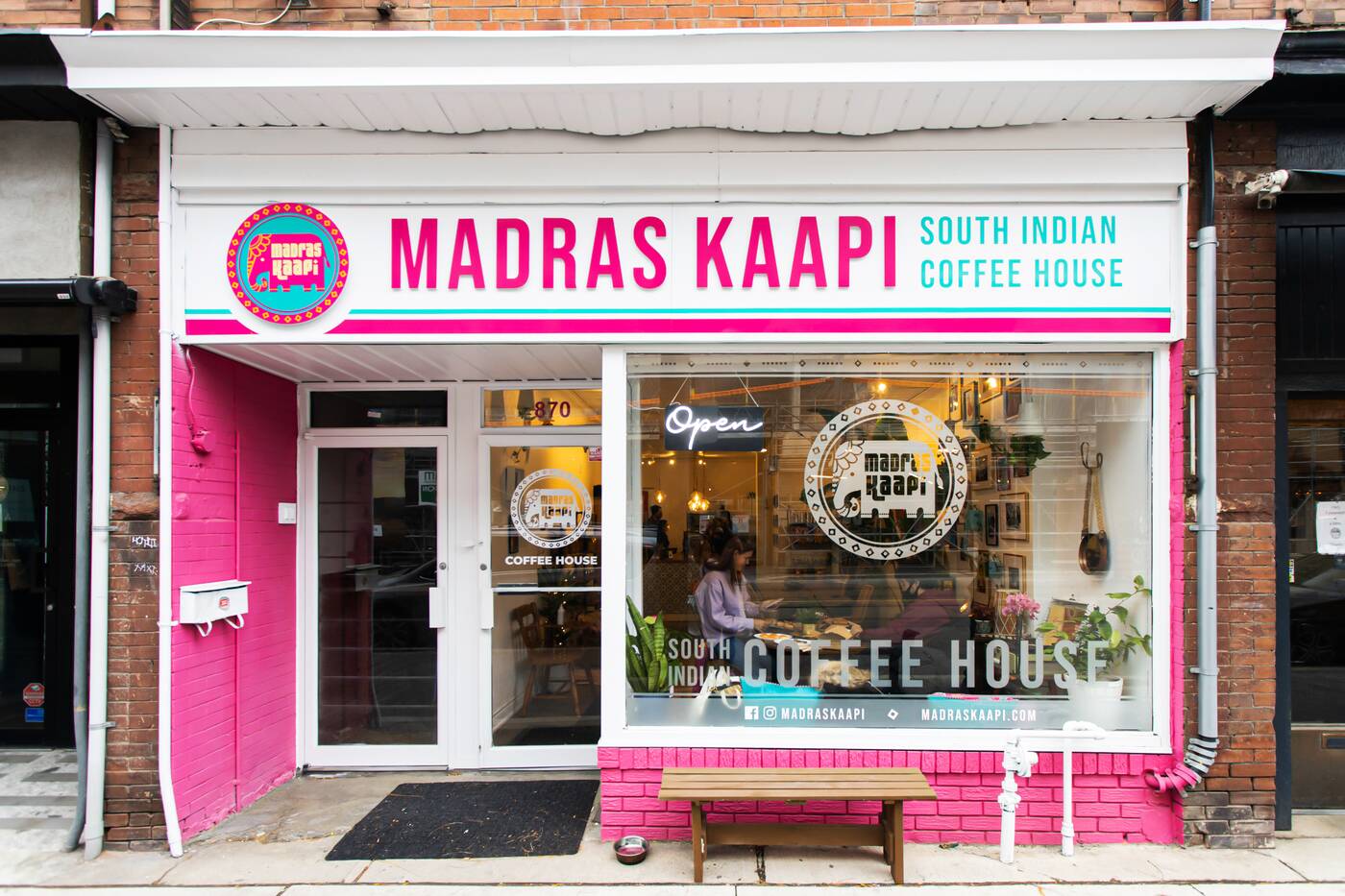