Kome Yogurt allows eight people at a time inside of the store, there is hand sanitizer available at the front counter.

Kome Yogurt is bringing a new concept of yogurt to Toronto, made in the form of a drink with Asian-inspired flavours.

The brand started inside of a food truck in 2020, where they became a hit at events like Taste of Asia in Markham and Waterfront Night Market in Toronto. 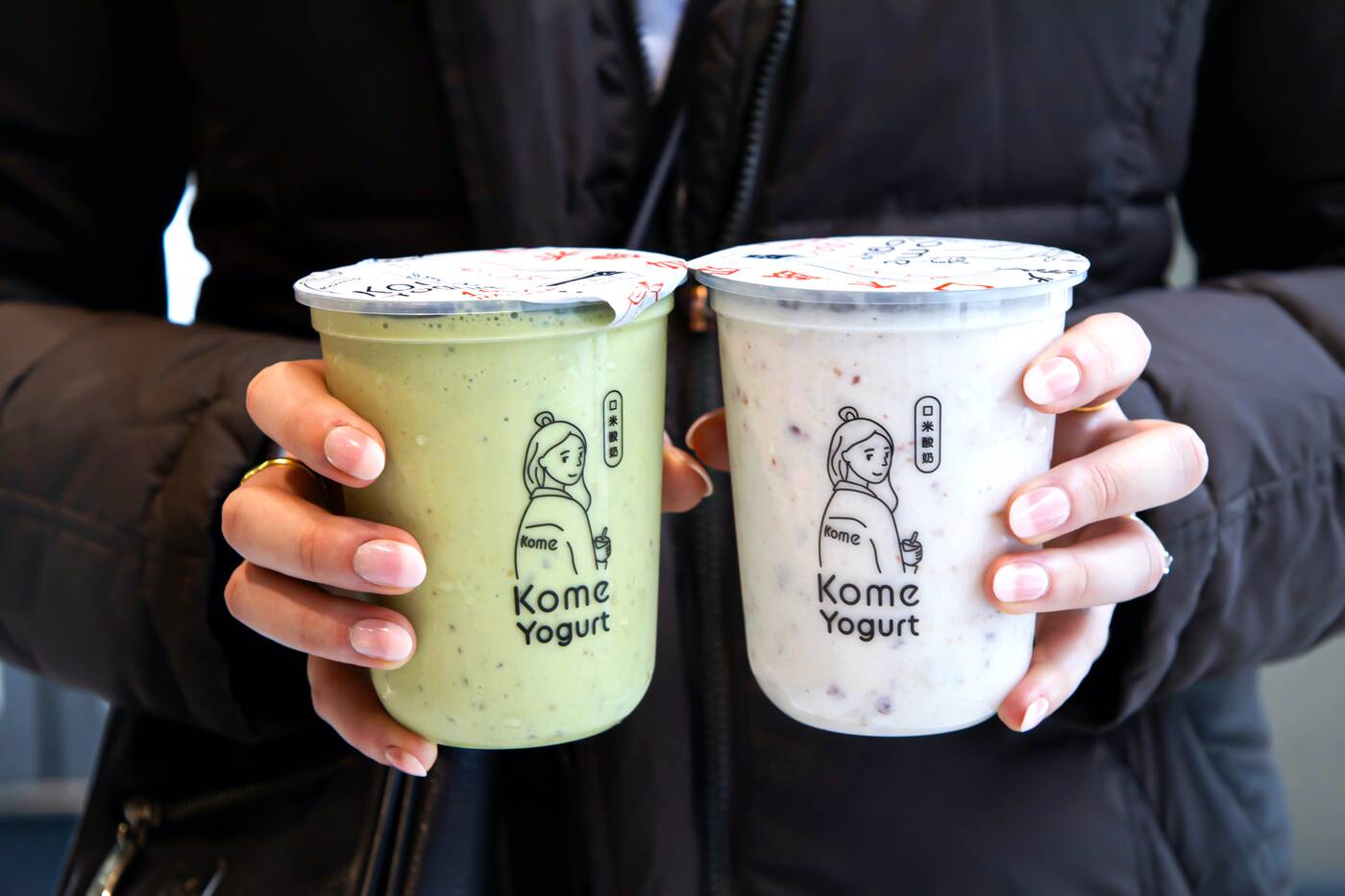 People enjoyed their yogurt so much, they kept asking about when they would open an actual store, says owner Andy Shi.

Shi was inspired to bring the yogurt drinks to Toronto after he saw a similar concept being done during his travels in Australia. 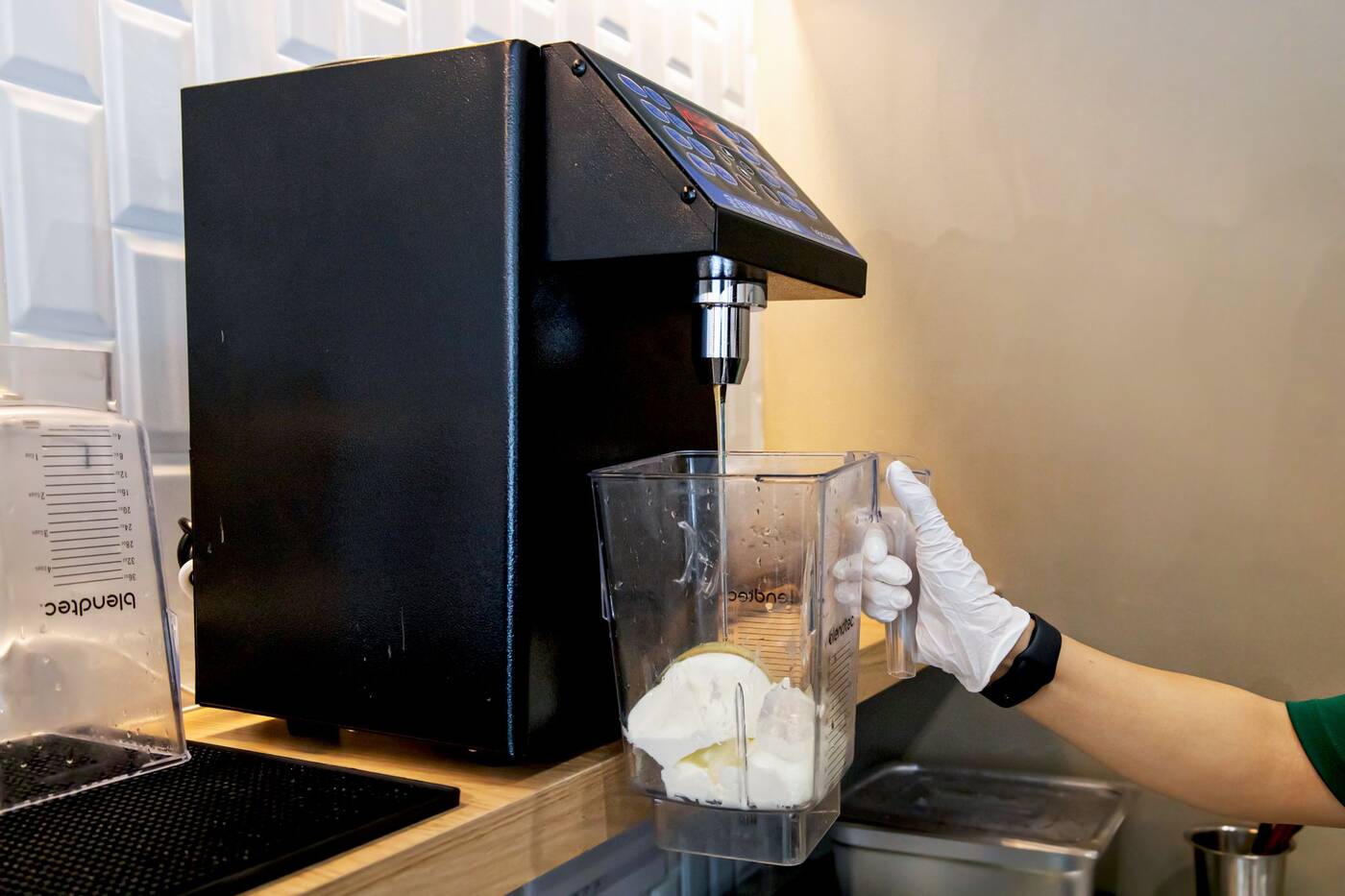 He incorporated an Asian influence into the brand, with a specific focus on Chinese, Korean, and Japanese food flavourings like purple rice, black sesame, and matcha.

At Kome, you won't find what you see in the average grocery store, their yogurt is 100 per cent natural and freshly-made each day at the store. 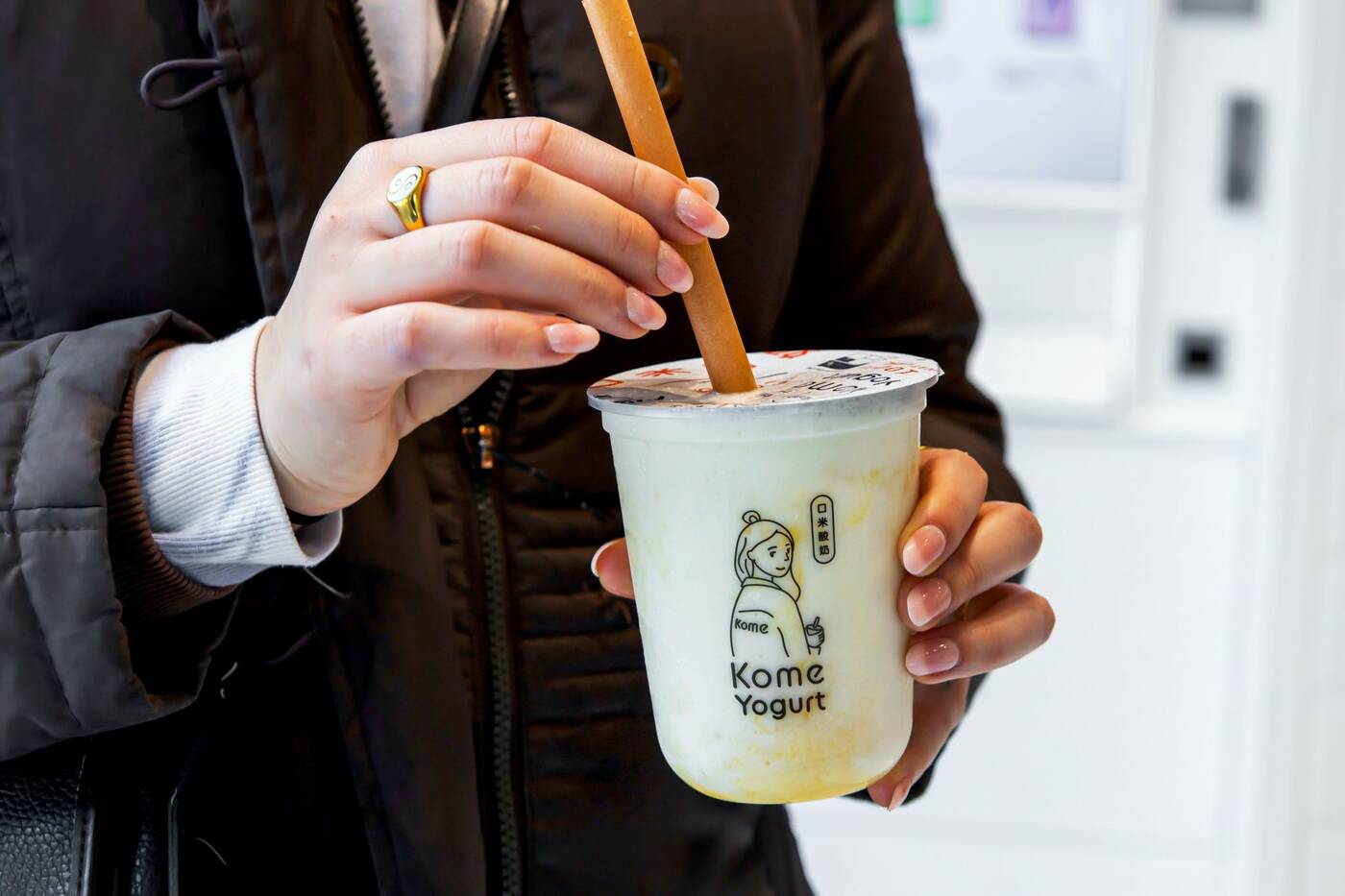 It's also fermented, meaning its high in probiotics, compared to other big brand, sugary yogurts.

Pop a straw into the Pina Colada ($7.49) flavour that's listed under their fresh fruit options. Coconut milk, crushed pineapple bits, Kome's base yogurt and ice are blended up to make this cup that tastes like summer. 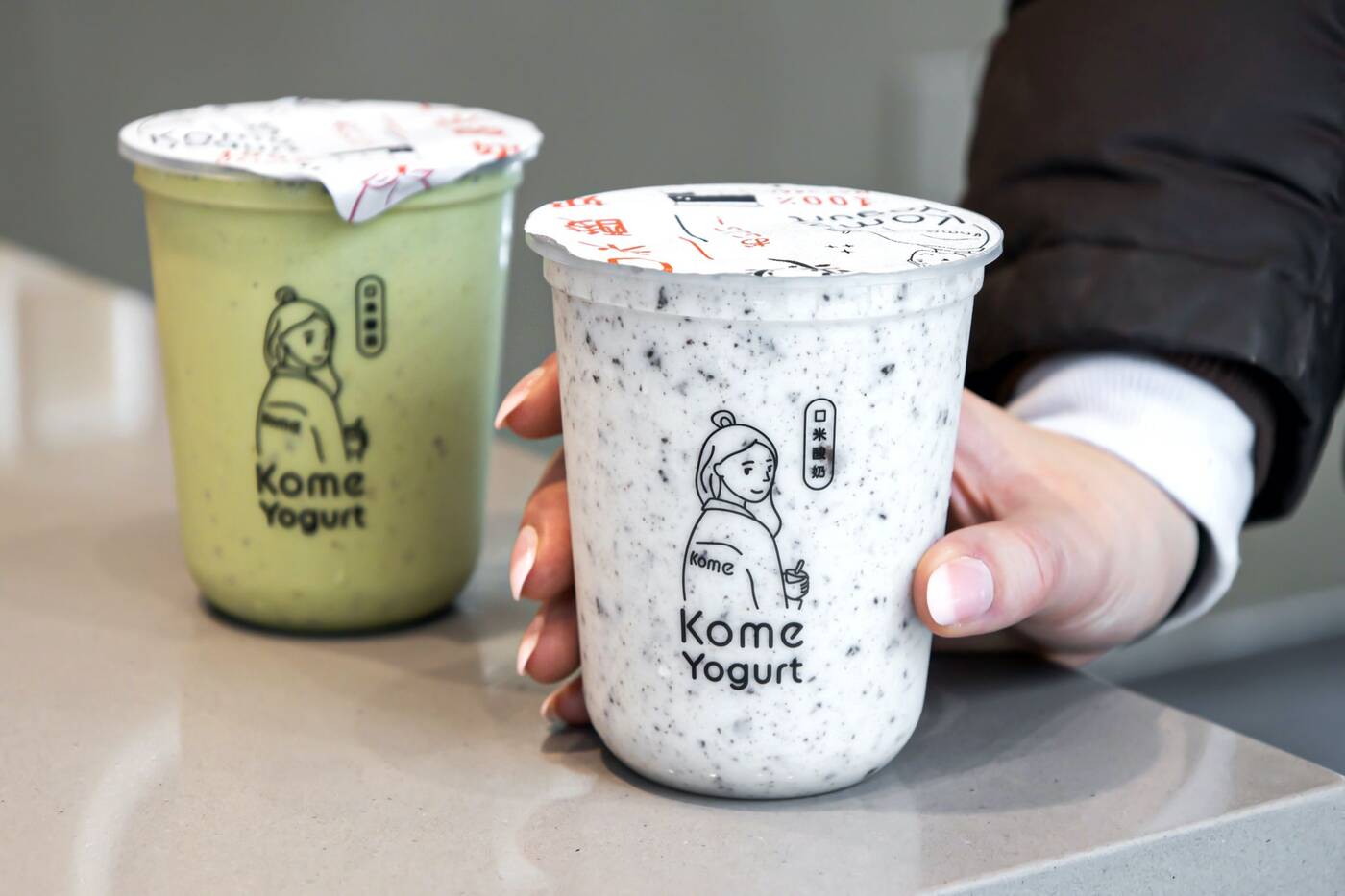 If you want something that resembles a milkshake, order the Oreo Creme ($7.19). Smashed flakes from real cookies is added in with cocoa powder, a pump of cane sugar and ice. It's a lot less sweeter than a milkshake, but you'll still be satisfied with the classic Oreo taste. 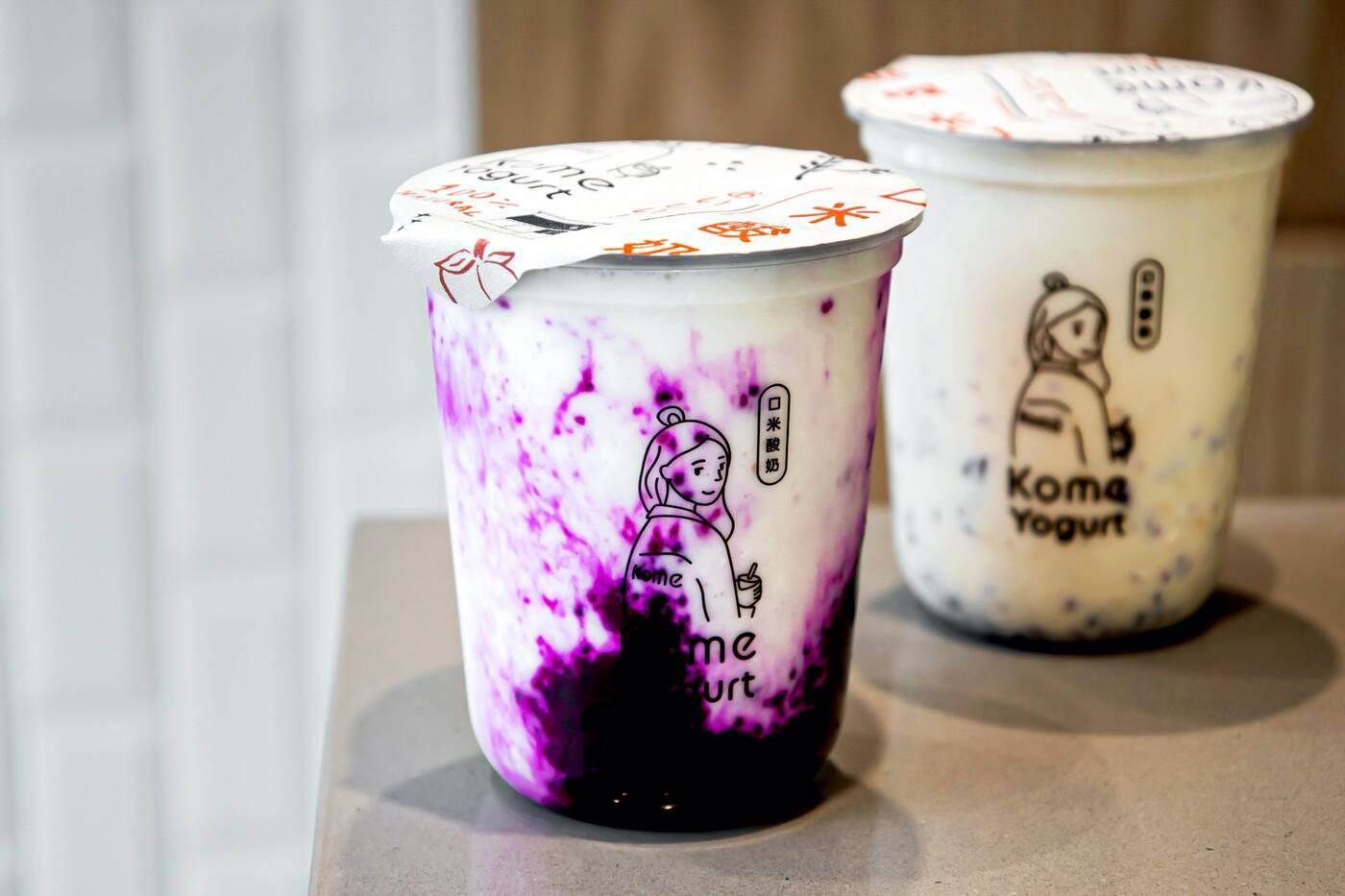 Another fresh option is the Red Dragon ($8.49) which has dragonfruit imported from Thailand inside of it. Cane Sugar, Kome's yogurt base and ice finish this blend off, with a taste resembling sweet jelly.

Purple Kome ($7.19) is what made the brand so popular and is one of their classic offerings. 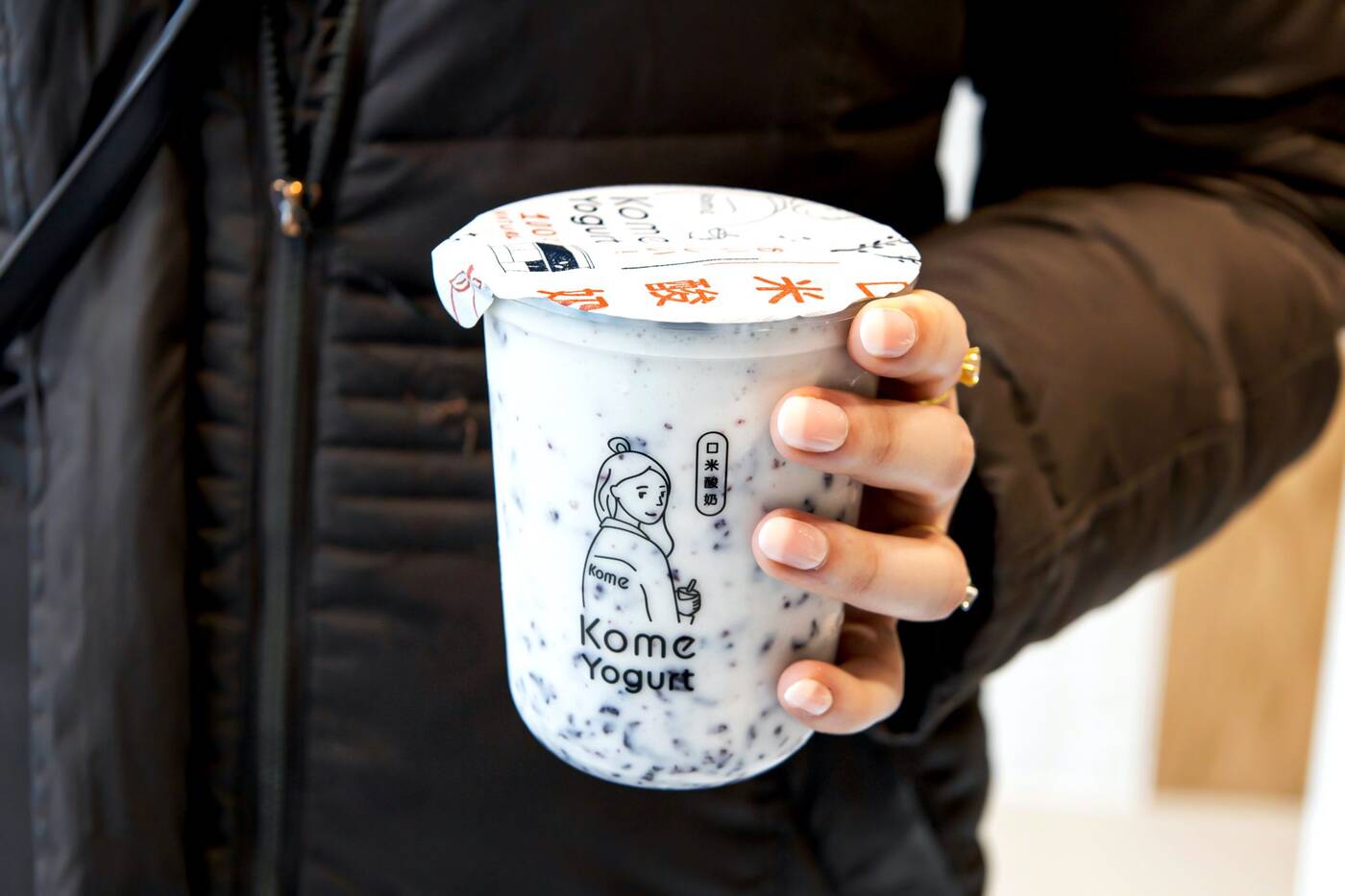 It's a bit on the plain side with the taste of the yogurt dominating most of the drink. But you'll enjoy the fun, chewy texture of the purple rice inside, which is soaked and steamed before added into each cup. 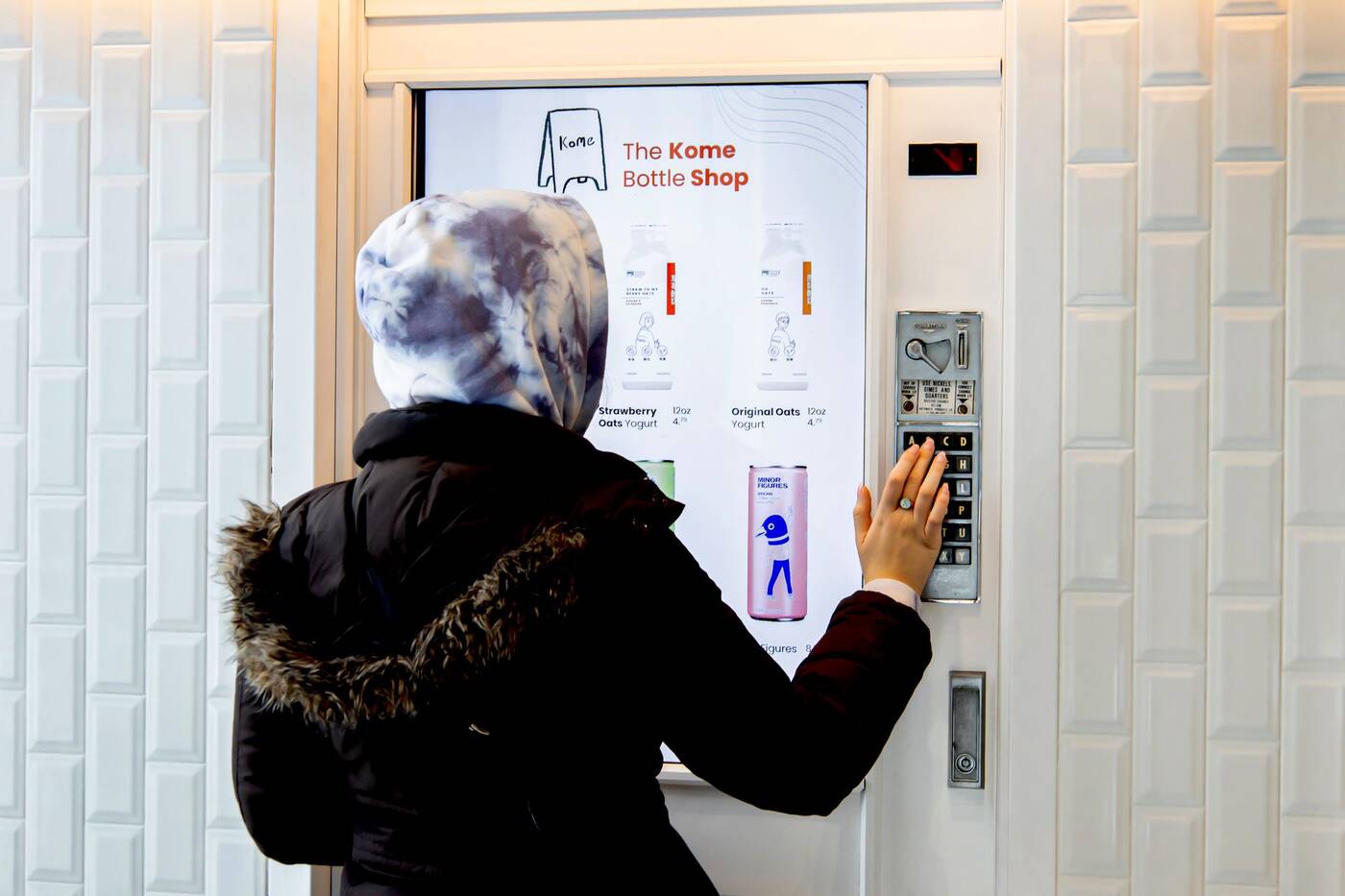 You'd never guess it, but Kome's space has a dual purpose. You'll find a menu of takeout yogurt bottles on the front of a secret door. This leads to a speakeasy bar attached to the yogurt shop called Bar After Seven. 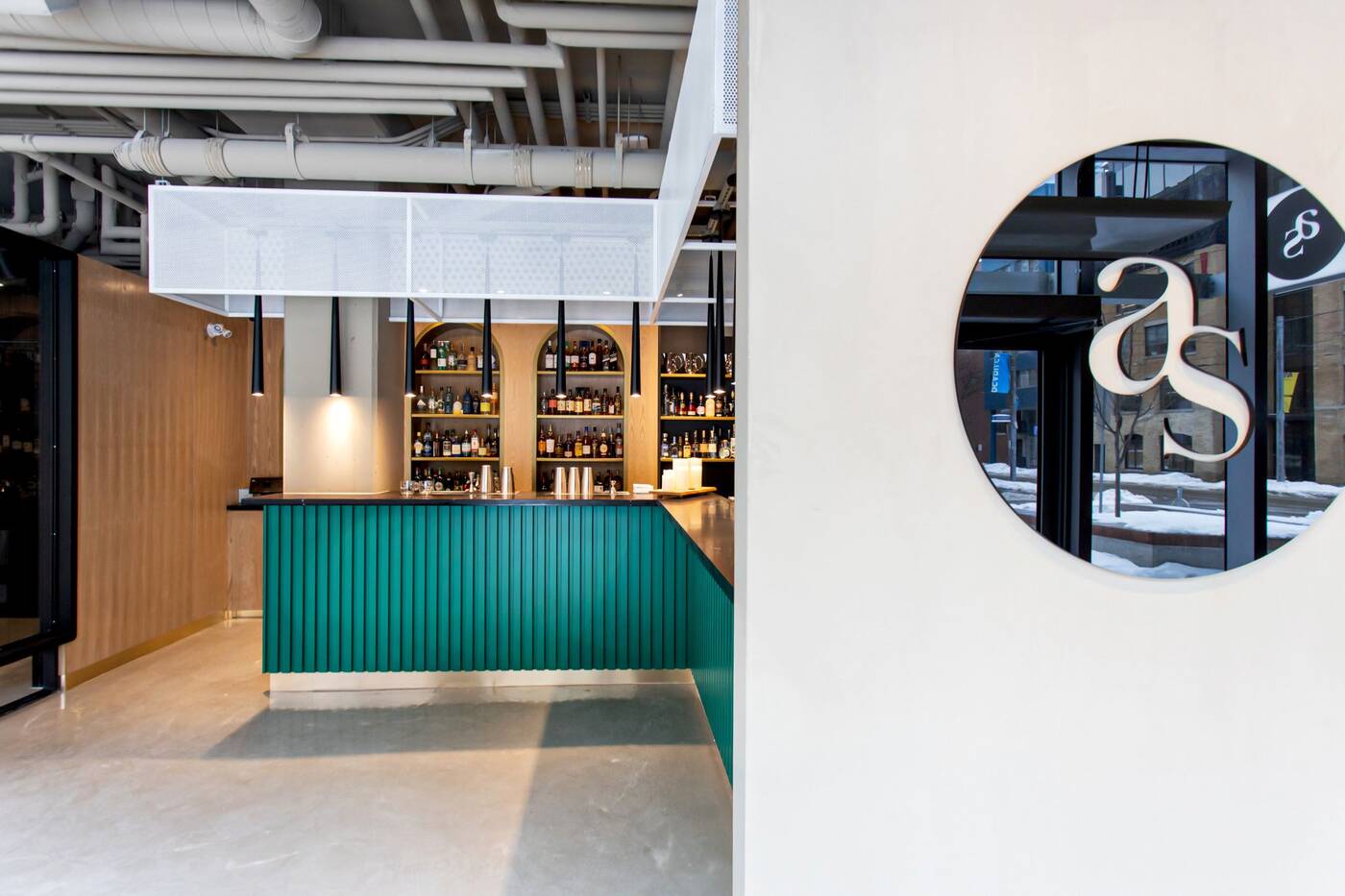 It's set to open in mid-February, but we got a sneak peak of the mini Japanese-styled bar and lounge.

To get inside, you'll need a password (shared on Bar After Seven's Instagram) that you tell to the barista out front at Kome's, once you arrive. 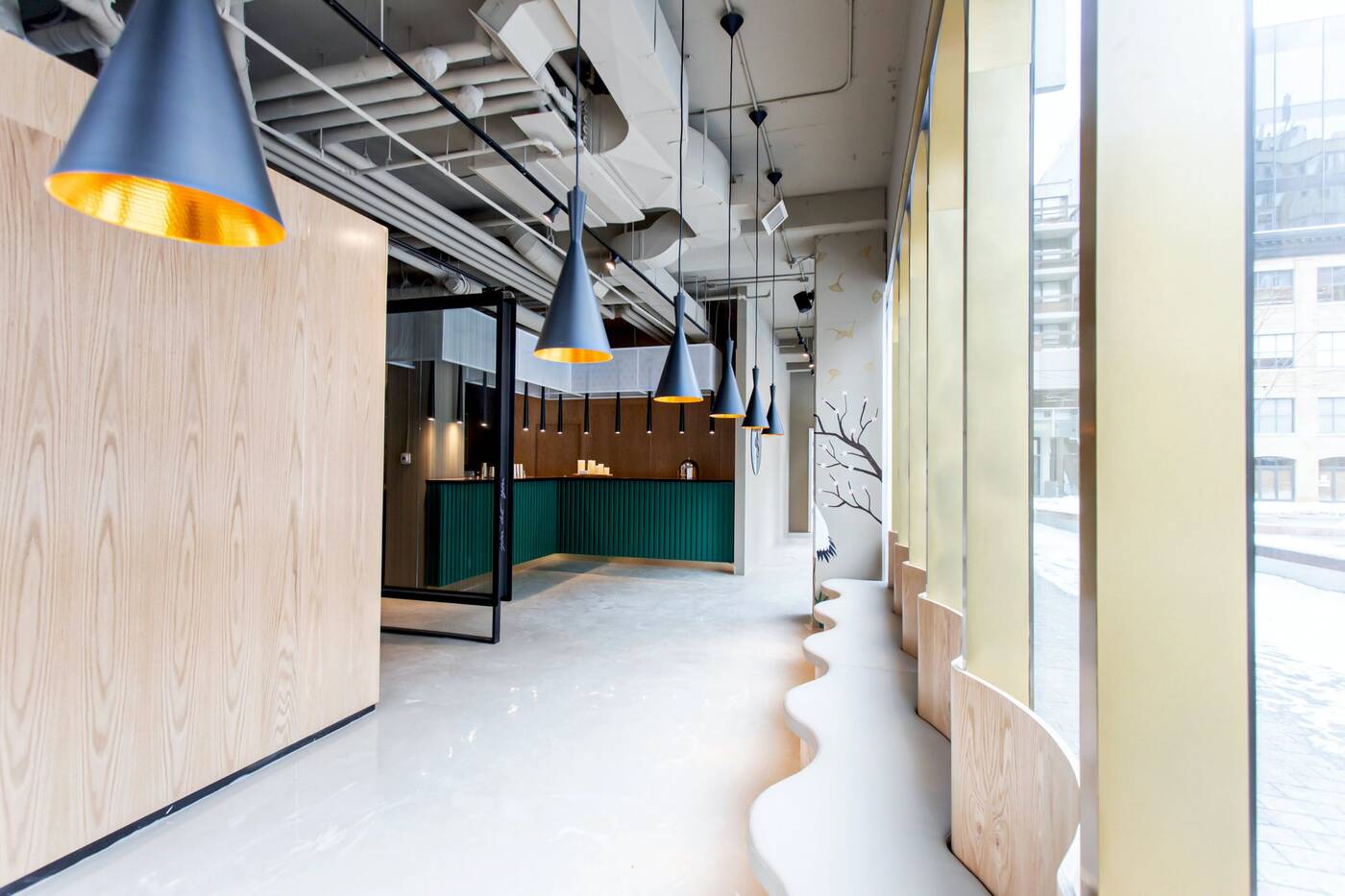 Alternatively, the store has partnered with various restaurants in the Queen West area, who give out random tokens that give you access into the hideaway. 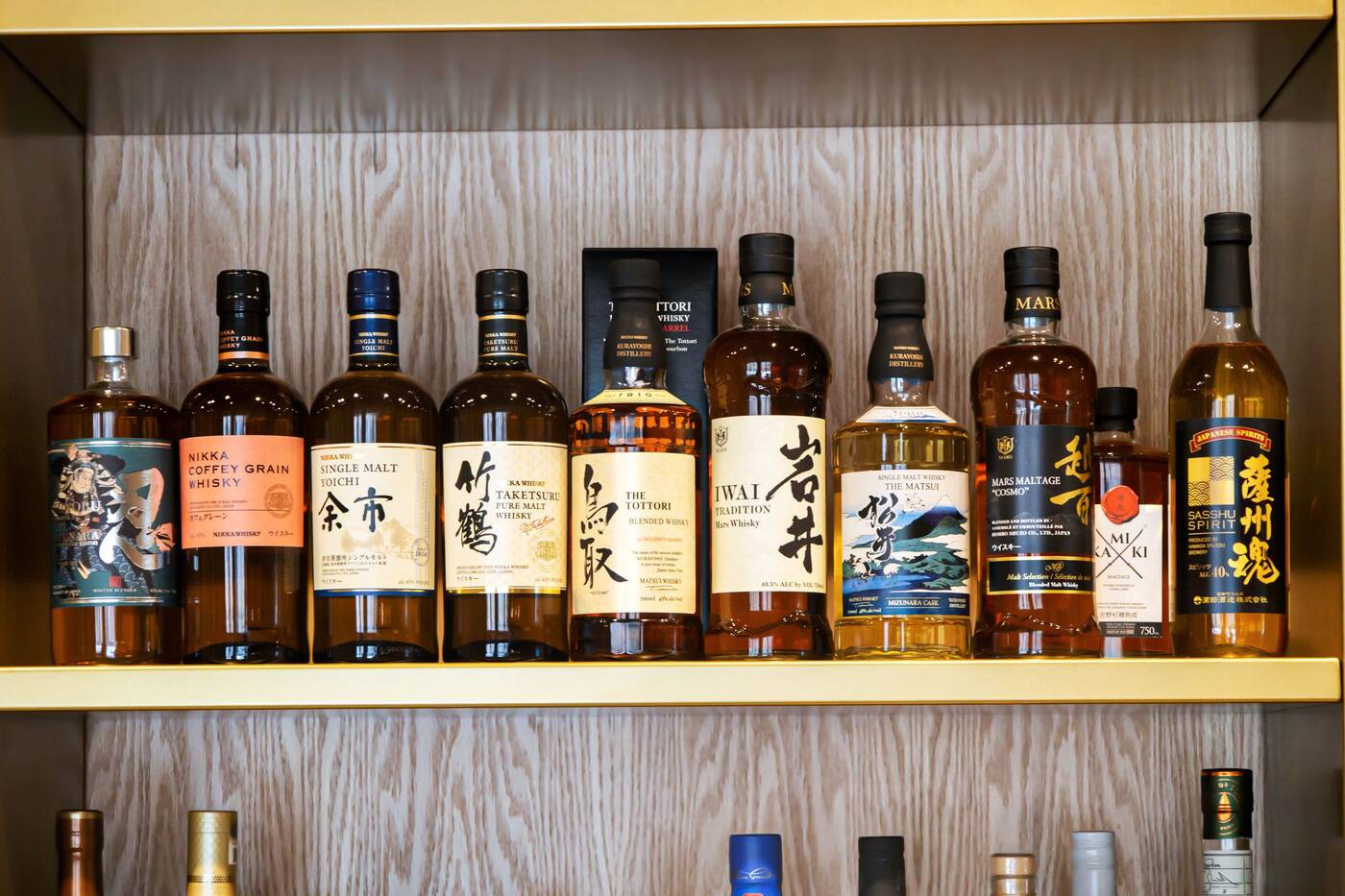 Once the bar does open, you'll be able to get speciality Japanese whisky's, which will always be in stock, along with Canadian favourites, like Forty Creek and J.P. Wiser's. 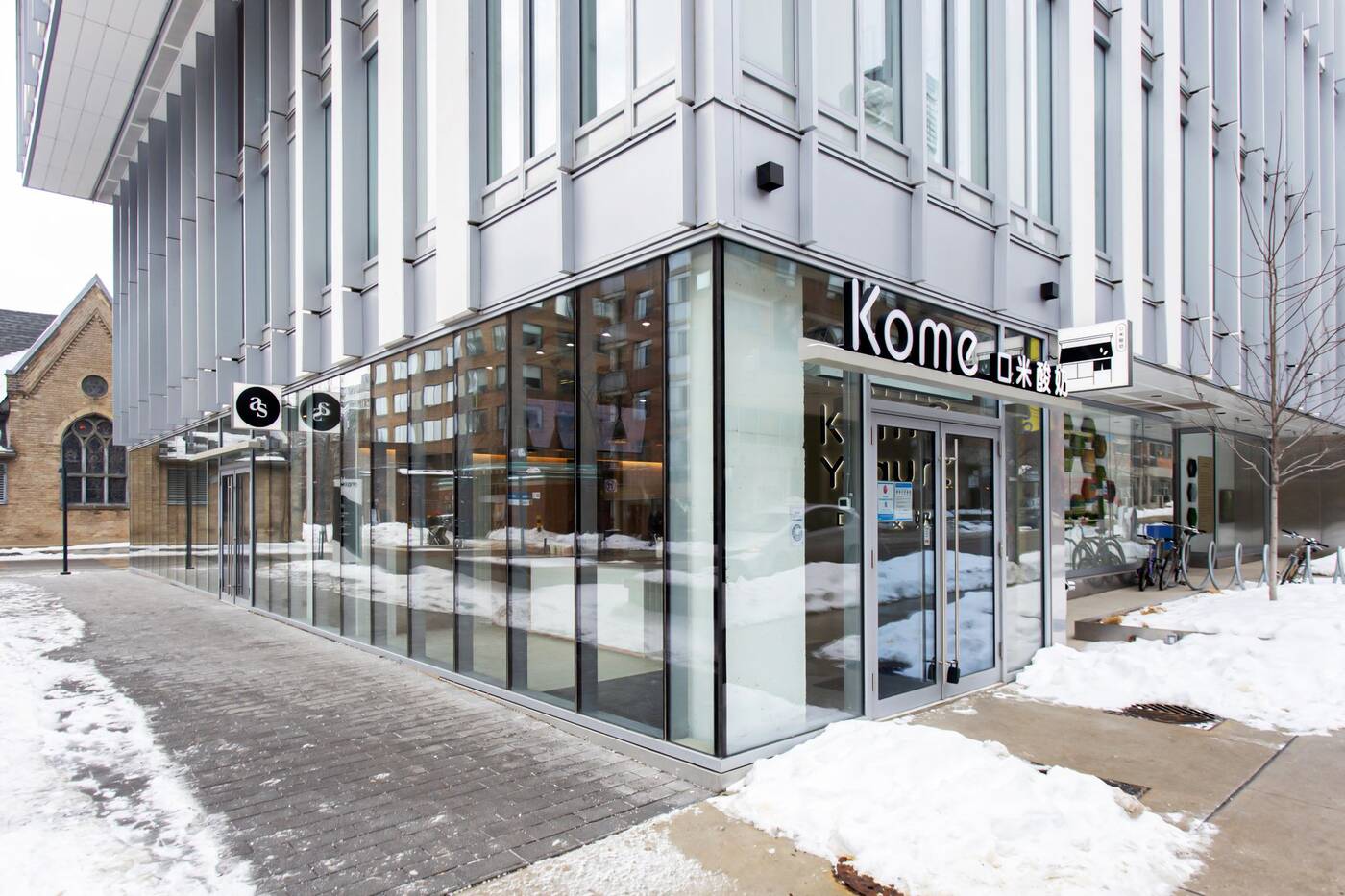 Kome Yogurt is tucked into a residential side street right off of Queen Street West. You'll probably already have a debit/credit card on hand, but in case not, you should know the store doesn't accept cash.