Hot Box cafe is a novelty cafe in Toronto if there ever was one. While the menu offers a reasonably robust selection of breakfast/lunch/diner and other 'munchies', the real draw to this Kensington Market staple is the freedom to toke up between bites. That's right folks, while Canada has not formally legalized (or even decriminalized) marijuana, you can include sparking up in a cafe on your long list of why it's great to be a Canadian.

The Hot Box Cafe has opened its doors to high times and fine munching for 11 years while avoiding any major conflicts with police. Technically speaking, Hot Box is not breaking any laws but is rather "surfing the grey line of the law", as owner Abi Roach explains it. The cafe allows patrons to bring their own weed to the shop (BYOP, and in reasonable quantities please) but has a strict "no dealing, fishing, mooching or asking" policy on top of an 18+ enforced age minimum. Aside from having to buy your pot elsewhere, Hot Box Cafe is not far from what you can expect to find many kilometers away in Amsterdam, with a few less Aussies and a couple more GTA suburbanites. 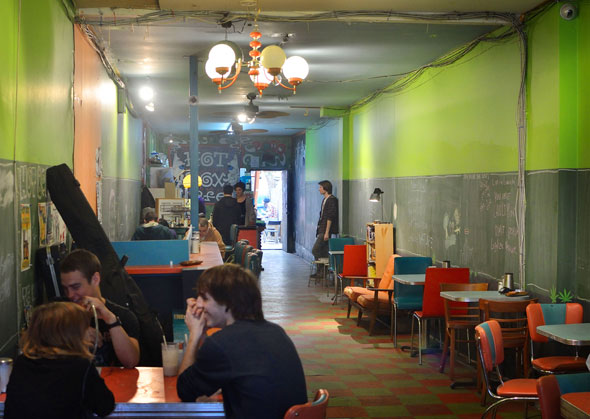 Hotbox recently split in two with the previously attached Roach-o-Rama, selling bongs, pipes, papers and general hemp related goods, opening up in a separate location a smoke-signal away on Augusta Avenue . The original location on Baldwin is now host to the cafe alone and has substantially freed up its indoor seating area for customers in addition to the ten or so tables in the secluded and partially shaded back yard. As night falls, soft fairy lights illuminate the back and a constant flow of everything from techno to classic rock pumps through. Tuesday through Sunday after 7pm, known as Hot Box AfterDark, features jazz, comedy, DJ's and more with a $5 cover charge. Daytime goers are subjected to $4.20 minimum menu order.

In case you start greening out and forget where you are, the menu is helpfully decorated with pot-leaves and headers like "wake'n'bake breakfast" and "stonerwiches". The menu was updated not long ago and features a number of new items at slightly, ugh, higher prices.

The smoothie selection is substantial and a definite crowd pleaser holding you over your $4.20 minimum and keeping the pasties away. The smoothies are always refreshing, thick and filling enough to be a hefty snack. Drink prices have noticeably increased on the new menu, with my favourite smoothie, Purple Haze, a mix of blueberries, yogurt, honey and milk (including soy), going from $4 to $6.25, though the menu price now includes tax. 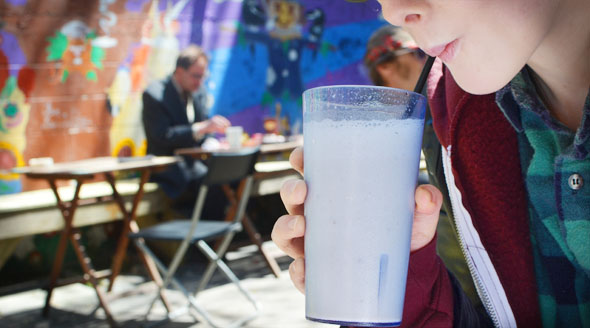 Going for something new on a sunny afternoon, I tried the Maui Marley ($5.75), a creamy combination of coconut milk, pineapple, banana and lime blended into a frothy mix. My non-pot smoking roommate Allie can easily be lured into Hot Box by their smoothies and favours the classic Honey Oil ($5.25) featuring honey, banana and milk. The fruit is brought in straight from the local produce vendors, a tradition owner and long-time Kensington Market resident Abi is proud to hold. 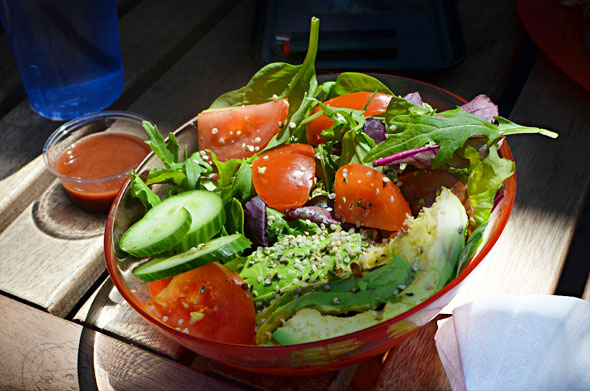 I also ordered the See Green Garden Salad ($7) which was a delightful melange of mixed greens tossed with slabs of tomato, avocado and cucumber. The salad was sprinkled with hemp-seeds and served with a side of a raspberry vinaigrette house dressing. The vegetables were certainly fresh and generous. 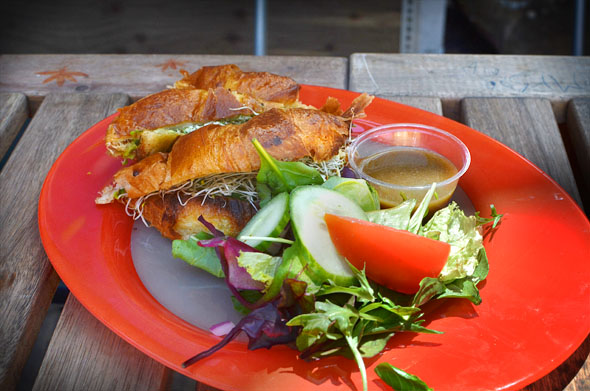 Allie chose the Northern Lights 'stonerwich' ($9) with a side of mixed greens. The sandwich is a rich combination of goat cheese and hemp-pest smothered onto a soft, buttery croissant and baked with roasted red peppers and sprouts. I'm still not a huge fan of croissant and goat cheese pairings, but Hot Box pulled it off nicely with the help of the tasty hemp-pesto and beautiful red peppers.

A couple of days later, Allie and I decided try out the Sunday morning breakfast scene. Much like the rest of Kensington Market , things were pretty quiet, even at noon. The nondescript techno music, awkward sunlight and general 'come-down' mood in the air made the outdoor back patio feel more like a Berlin after-hours than restaurant. I felt a little too fresh and ready for the day, but that quickly ended with a joint and four episodes of Top Chef Canada when I got home. 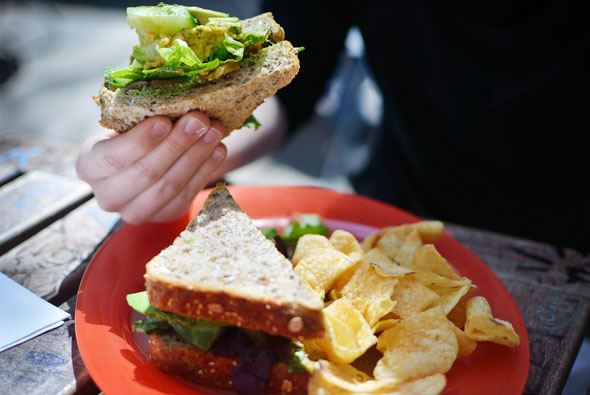 There are no vegan breakfast items so Allie went with the Hippie Vegan Sandwich ($7.00) and a side of kettle baked chips. The sandwich was generously stuffed with thick slices of cucumbers, avocado and tomato and sprouts. The multi-grain bread was smothered in a sweet hemp-pesto which added a delicious punch of flavour to the mix.

Described on the menu as "four pot-shaped pancakes" in either chocolate chip, banana or berries, with whipped cream and maple syrup ($9), I was wooded by the prospect of a scandalously shaped breakfast. I was disappointed when my four pot-shaped pancakes came out as three regular ol' circle pancakes (top photo), sans whipped cream. The pancake batter was of the boxed variety and the small, plastic container of Aunt Jemima on the side did nothing to remedy the situation. The chocolate chips, though, were plentiful enough to distract me slightly. The pancakes were fine, but after being raised on the real stuff, I couldn't truly enjoy the imitation maple syrup and white pancake flour.

Hot Box is the place to go when the rest of the world is harshing your mellow. The cafe offers what many may dream of- the chance to smoke marijuana openly amongst friends in a safe and friendly environment. Hot Box runs on the philosophy of normalizing marijuana, trying to make it no more a novelty to go smoke a joint than it is to go drink a beer. And in case you are wondering, Hotbox has no intention of selling liquor anytime soon; the cafe is meant as an unique alternative to the already plentiful Toronto bar scene. 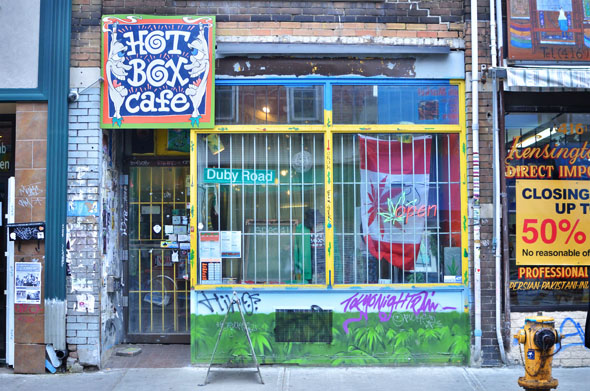 Writing and photos by Kaela Greenstien