"Coffee Tree," a friend of mine said. "It smells really good in there." Definitely a good sign. For the name of a place to jog such a specific area of memory, I knew it must really be something.

For many years, smell was the only thing that I liked about coffee, but I sure liked it a lot.

I looked forward to an indulgence of my senses, as well as hitting up the west end. It's where I live in my regular life, but not so much in my cafe life. Not lately, anyway. 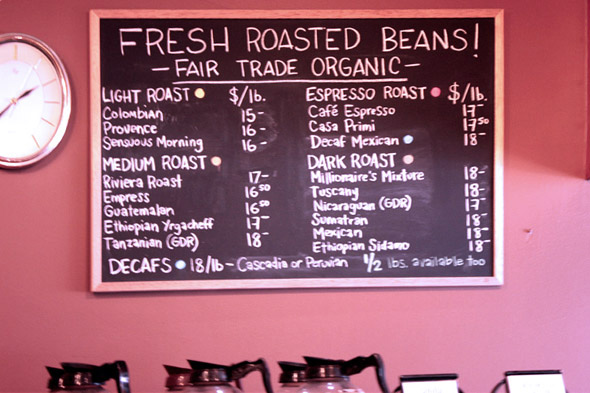 It turns out that Coffee Tree sits on a kinda familiar corner, albeit one that is more so in much darker light. Had I walked by during their regular hours, I doubt I would have been able to bypass the stylish signage, wrought-iron patio furniture and antique brewing utensils in the window.

And my nose might have also picked up on something, of course, as my friend was definitely right. And apparently, we're not the only ones to have noticed this, as the fact is referenced to repeatedly on their website. 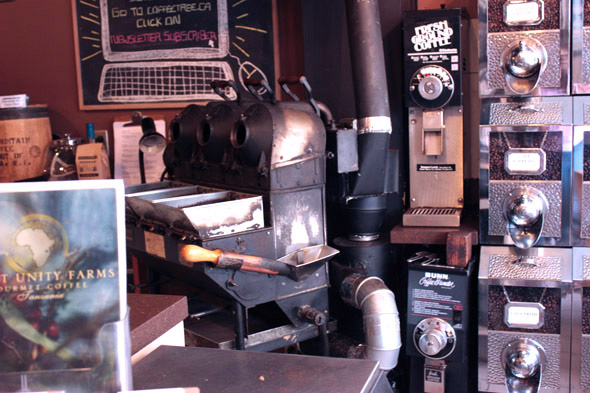 What we all have to thank for these olfactory treats is the daily roasting of Coffee Tree's very vast bean selection in their small-batch roaster. Now, I've seen a lot of roasters around this town, but I think I like this one the best. When I look at it, I feel kind of like the pioneers must have (a mix of pride and admiration), cuz it's got that olde-tyme feel I'm so fond of. 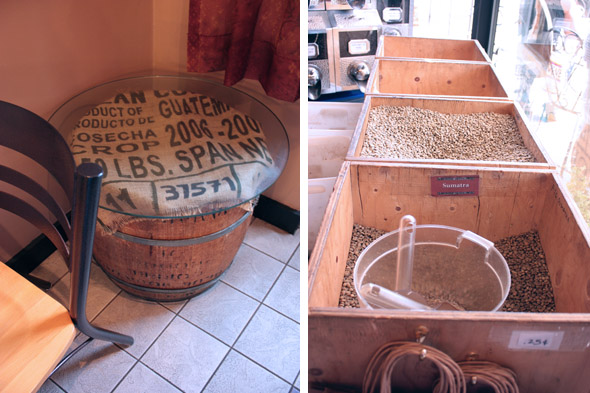 It has three separate cylinders which apparently facilitates their penchant for mixing and matching flavors. Lined up all the way down a gigantic wall, are rows and rows of beans which can be purchased in bulk. Or if you prefer, dig around in a bin of still-green Sumatra (today, at least) to take it all a step further.

An almost equally epic selection of teas faces off across the way. An apothecary's wealth of jars is hard to pass up, because there's something to pique everyone's interest. Even an official tea non-drinker like myself was questioning my initial (coffee!) drink decision. 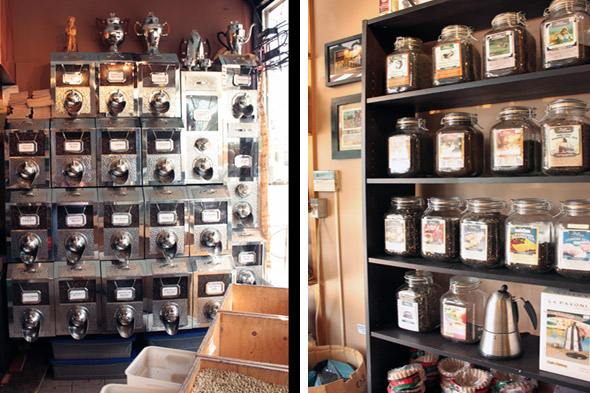 The shop has a lot to offer; a chilled but classy atmosphere (I think I saw 2 parties who were in some kind of business meetings), a wide selection drinks (organic and fair trade, of course) and baked goods, and "real" food items like sandwiches and wraps. Giant, doughy empanadas catch my hungry eyes, and "World's Best Carrot Cake" sounds and looks so promising it hurts. 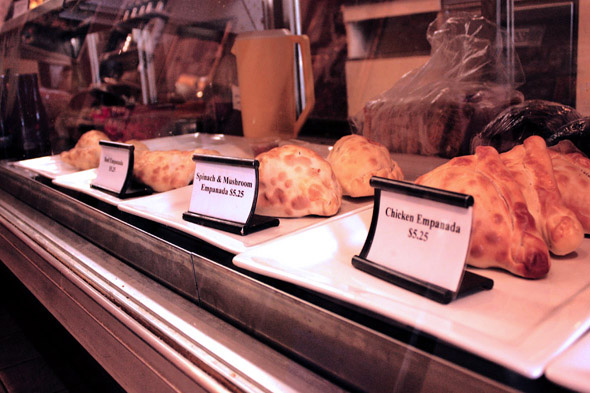 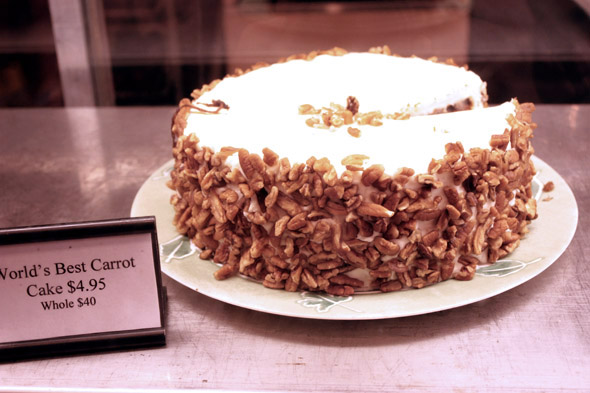 The generously nut-encrusted surface certainly has the potential to back this claim up. However, I got a late start to my day, and though it's practically lunchtime for the rest of the world, my body only knows what it needs: coffee and a scone. I keep things simple, with a regular, medium roast which is crisp and not too strong (ie. the medium roast actually tasted so). 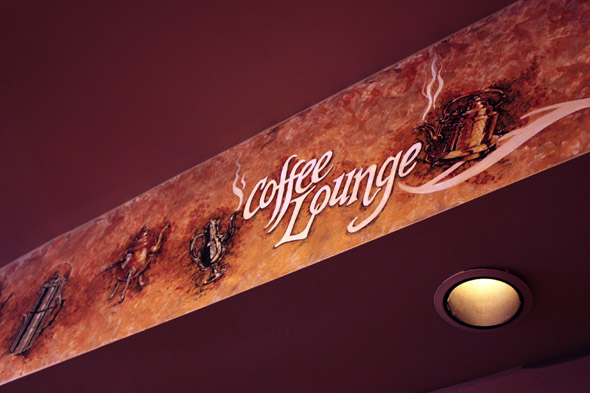 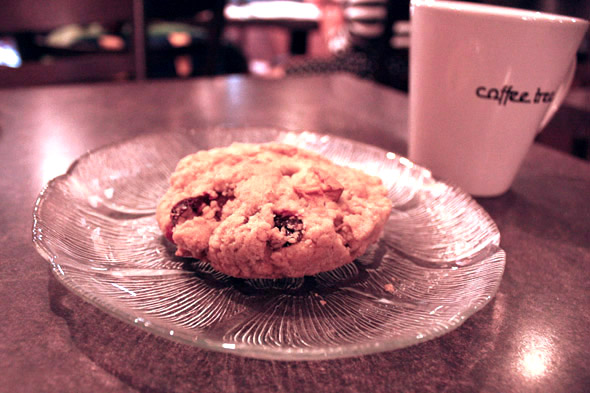 I am left to explore the eclectic space, which also doubles as a gallery. I am also approached by a man who introduces himself as the artist whose paintings I'd just been staring at. Which was startling, in a compelling way.

Lorne Corley is the cafe's featured artist for July, and he confirms what I've heard around, that Coffee Tree is "Toronto's first independent roastery. I remember when they first opened up here."

"How long ago was that?" 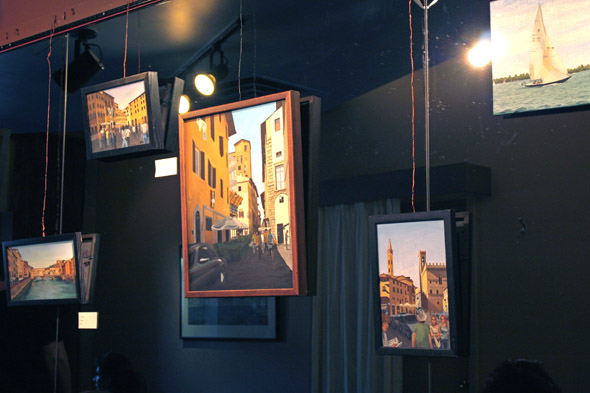 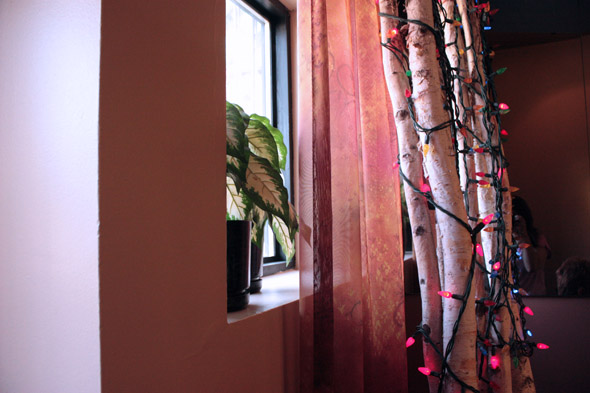 It's no wonder that this place has the appearance and efficiency of a well-oiled machine. In this time, they've also managed to amass a collection of interesting prints and knick-knacks, all reinforcing the worldly vibe of the place.

Offering coffees from all over the globe, it seems that they have saved a souvenir from everywhere. The decor reminds me of a well-travelled suitcase. Collaged in exotic stickers, it's comfortable and heartily lived-in. 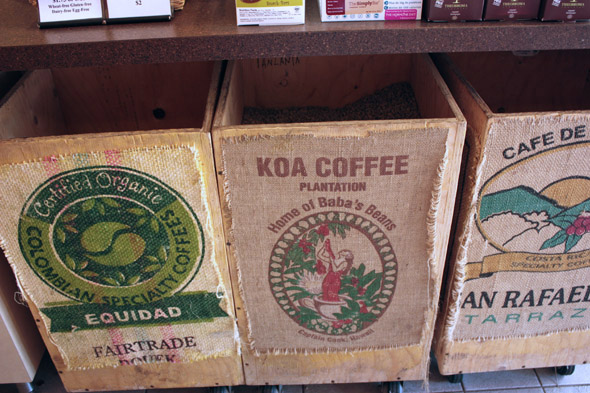 My cranberry and apple scone is dense and crumbly, and even in the shape of a cookie, just to mix things up a bit. The staff are all quite busy, assembling lunch-rush sandwiches and attempting to get them to their rightful owners.

One or two are called out repeatedly, until it is revealed that those receiving are too distracted by the sun. That very one which hid out all weekend, and has now decided to come and drench their backyard patio. Time, naturally, stops. 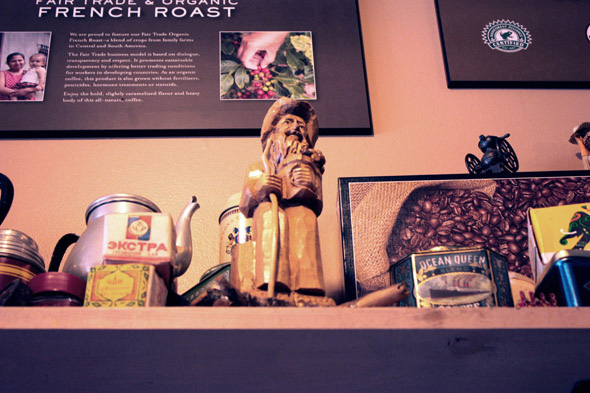 Not a bad way to spend a Monday morning. 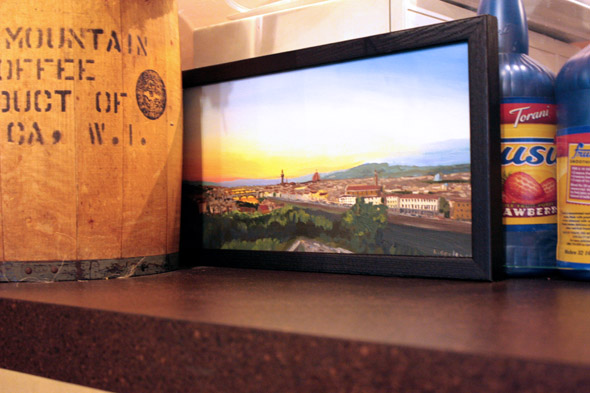