Balzac's Powerhouse is currently open but their offerings and services may be affected due to the pandemic. Please contact the business directly for more information about any changes. Is this your business? Please contact us if you would like to update this message.

Balzac's seventh cafe in Toronto is housed in a former powerhouse that was once a part of The Canada Foundry and then Canadian General Electric.

The restored heritage building near Davenport & Lansdowne was originally erected in 1906 when this part of town was almost exclusively an industrial area of the city. 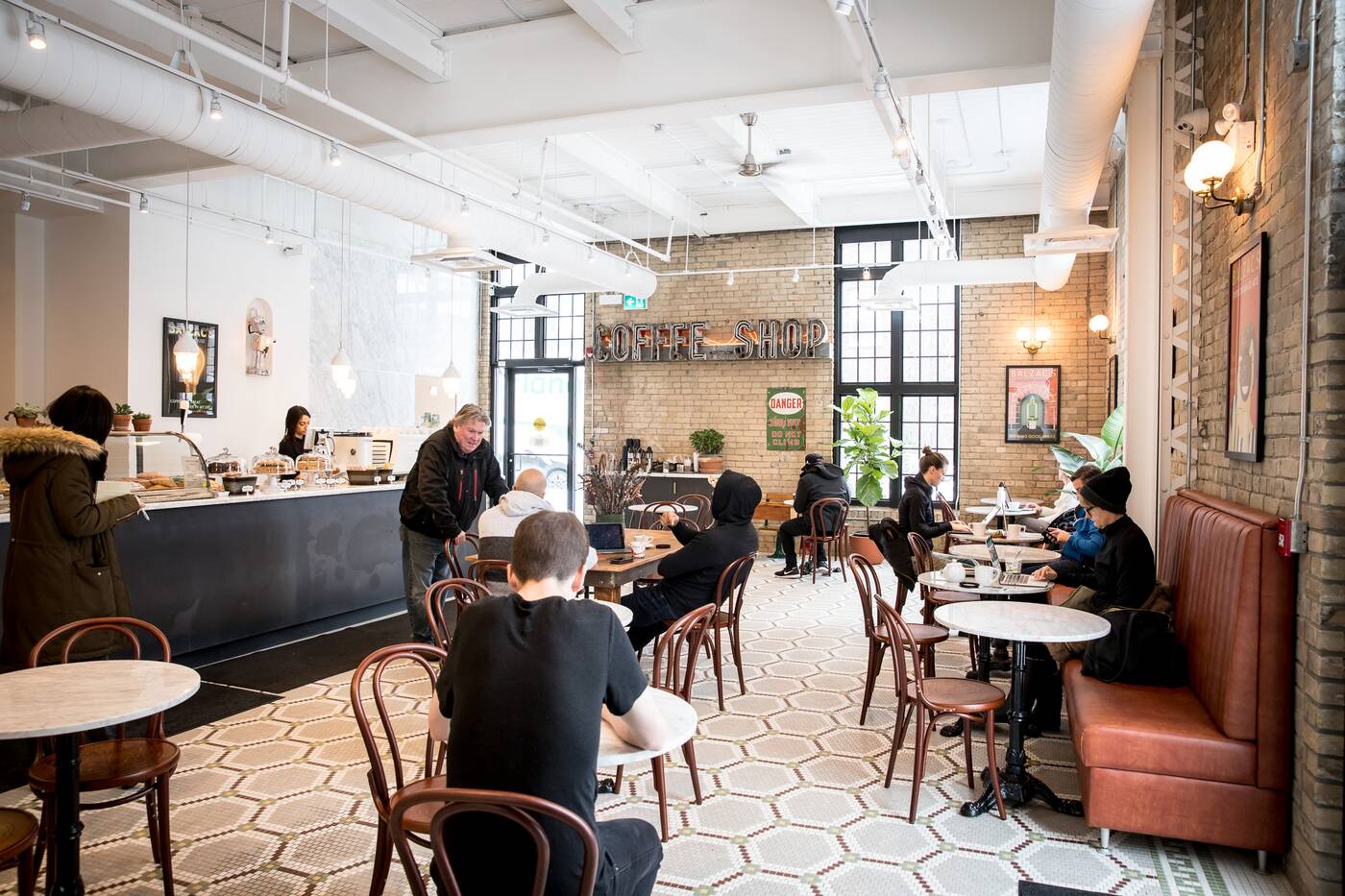 Owner Diana Olsen lives nearby, and she tells me she's known they were going to open a location here for two years. While waiting for the building to be restored, she had tons of time to plan and prepare for this cafe, and it shows in the details. 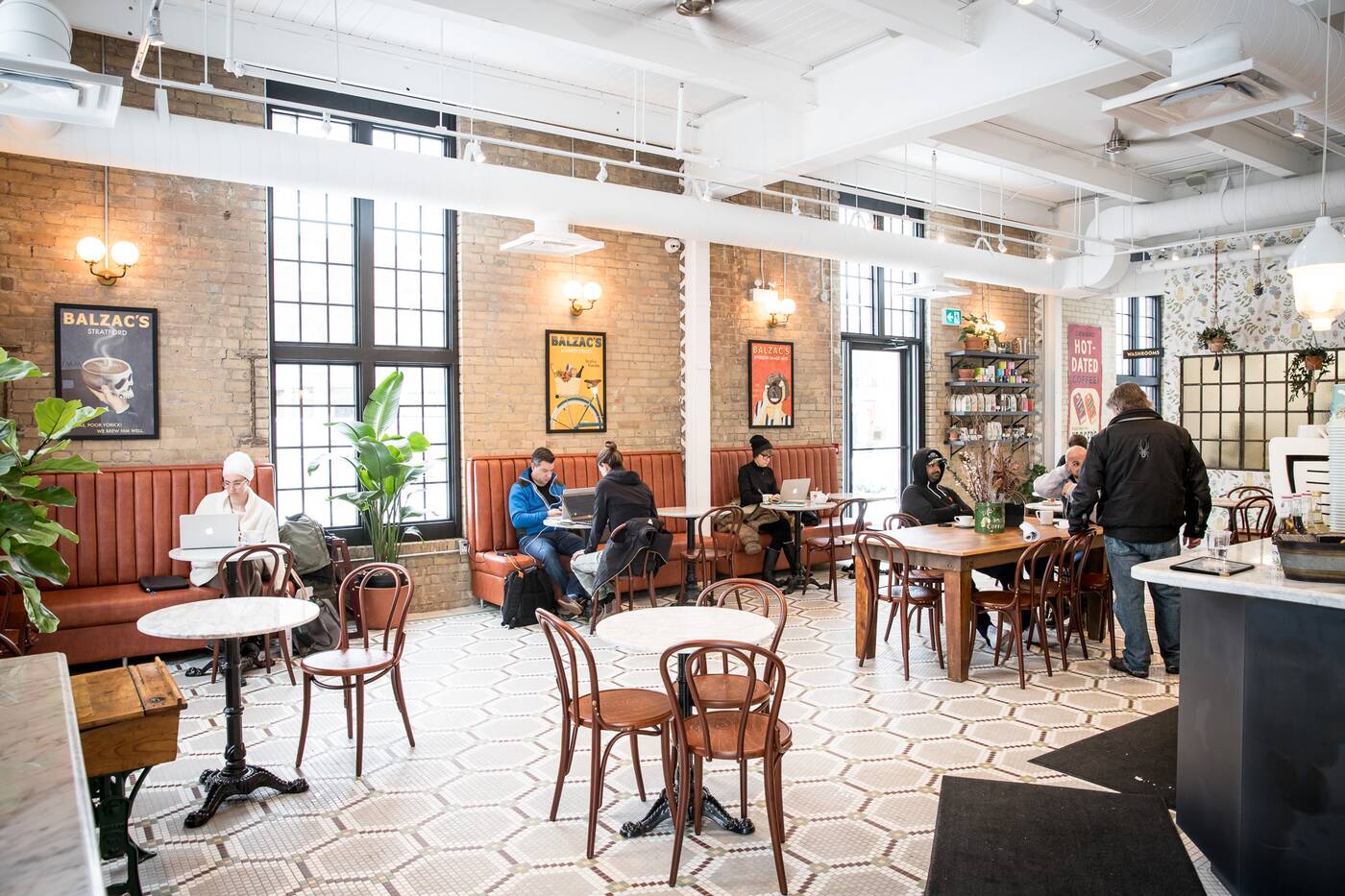 Decor consists of a seamless blend of artifacts from the building's past. There's a vintage "Danger" sign warning about high voltage on one of the exposed brick walls along with more modern touches, like leafy plants and custom-designed coffee-and-plant-themed wallpaper by designer Kate Golding.

There's even an adorable GE "coffee robot" perched above the service counter as a nod to the history of the space. 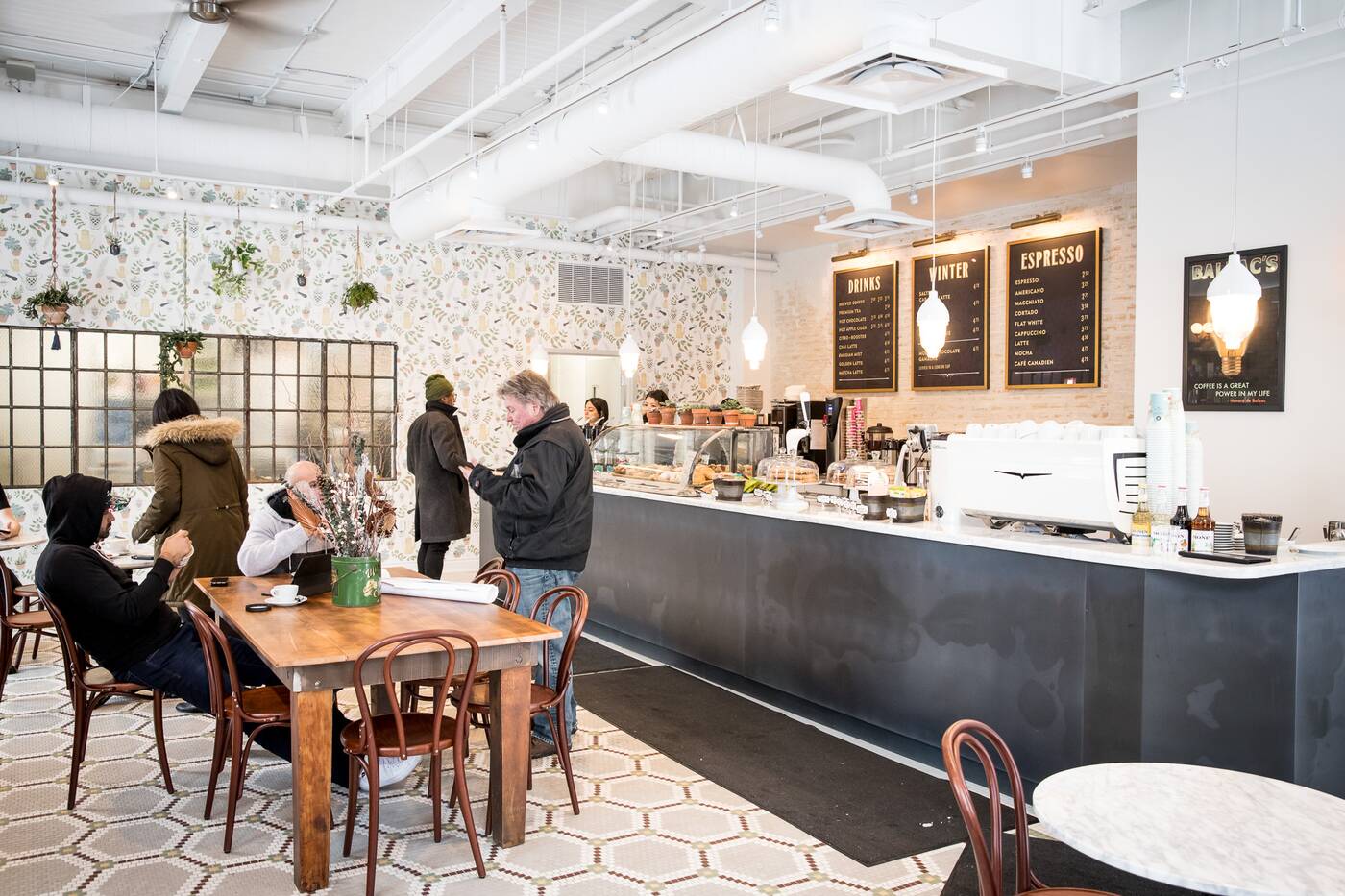 This cafe has a simpler, more pared down menu compared to other locations, with two permanent lists of beverages flanking one board of seasonal offerings. Five drip options ($2-$2.75) include a range of bean origins and roast profiles, along with decaf.

Will Thorburn, Balzac's director of coffee, previously worked at Detour, and proudly tells me he was Calgary-based Phil & Sebastian’s third employee (presumably, after Phil. And Sebastian). 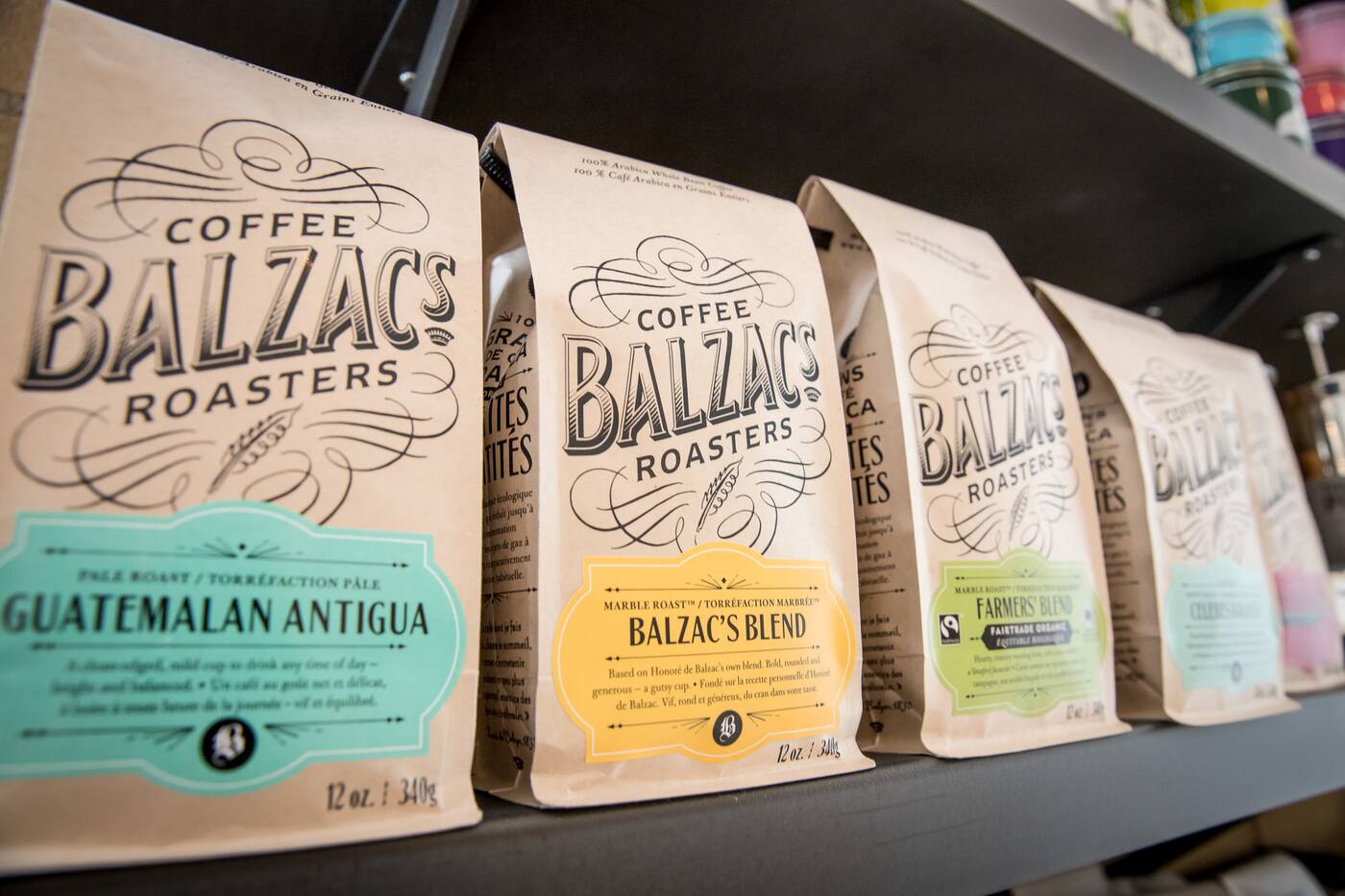 Thorburn places a big emphasis on sourcing high-quality, Arabica beans that are fair-trade organic whenever possible, which are roasted at Balzac's roastery in Ancaster using an eco-friendly Loring S70 Smart Roaster.

He's excited to feature seasonal and limited edition, single-origin, direct-trade beans from countries like Ethiopia and Burundi, and to introduce new aspects and flavour profiles of coffee to customers. 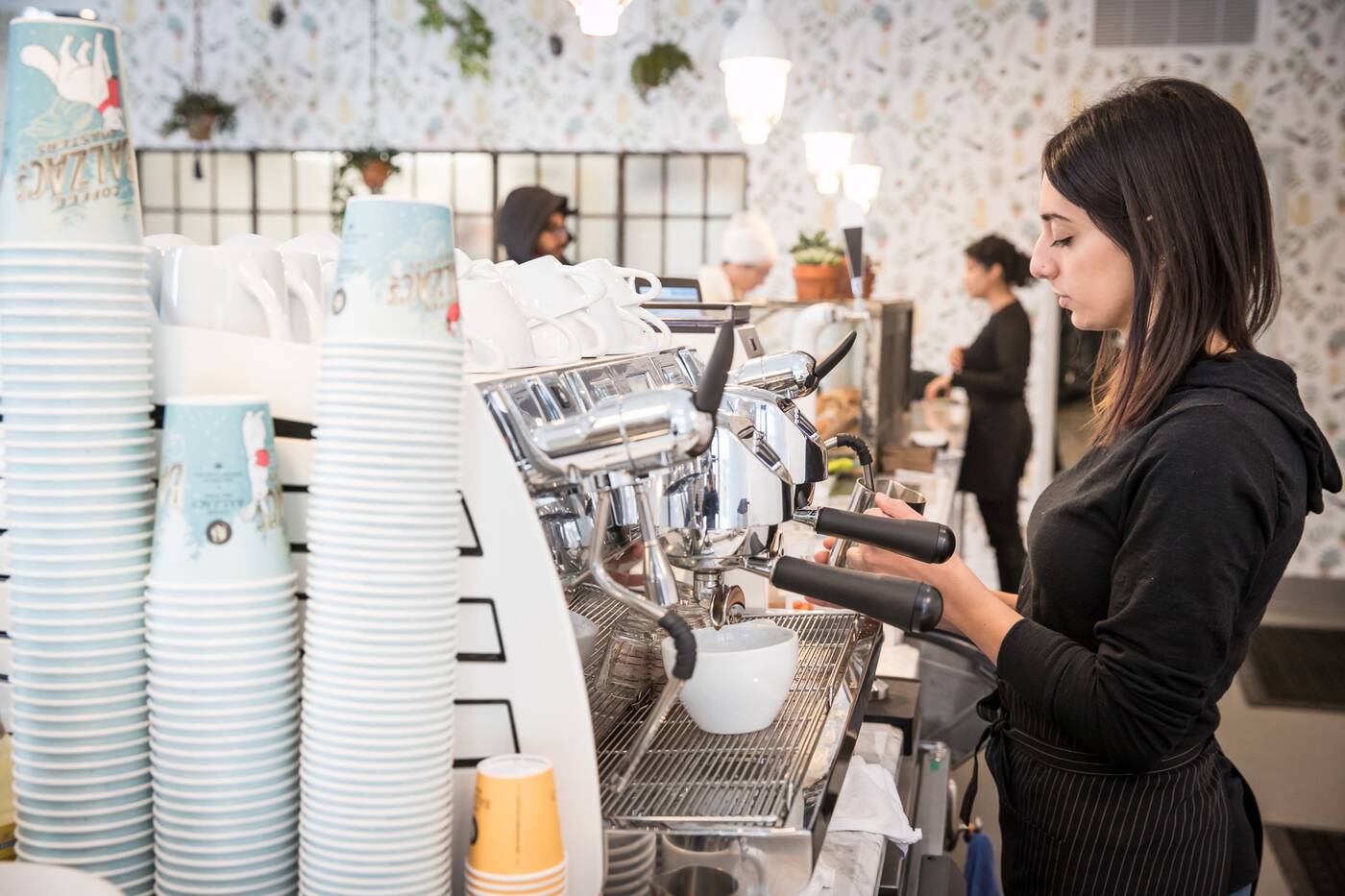 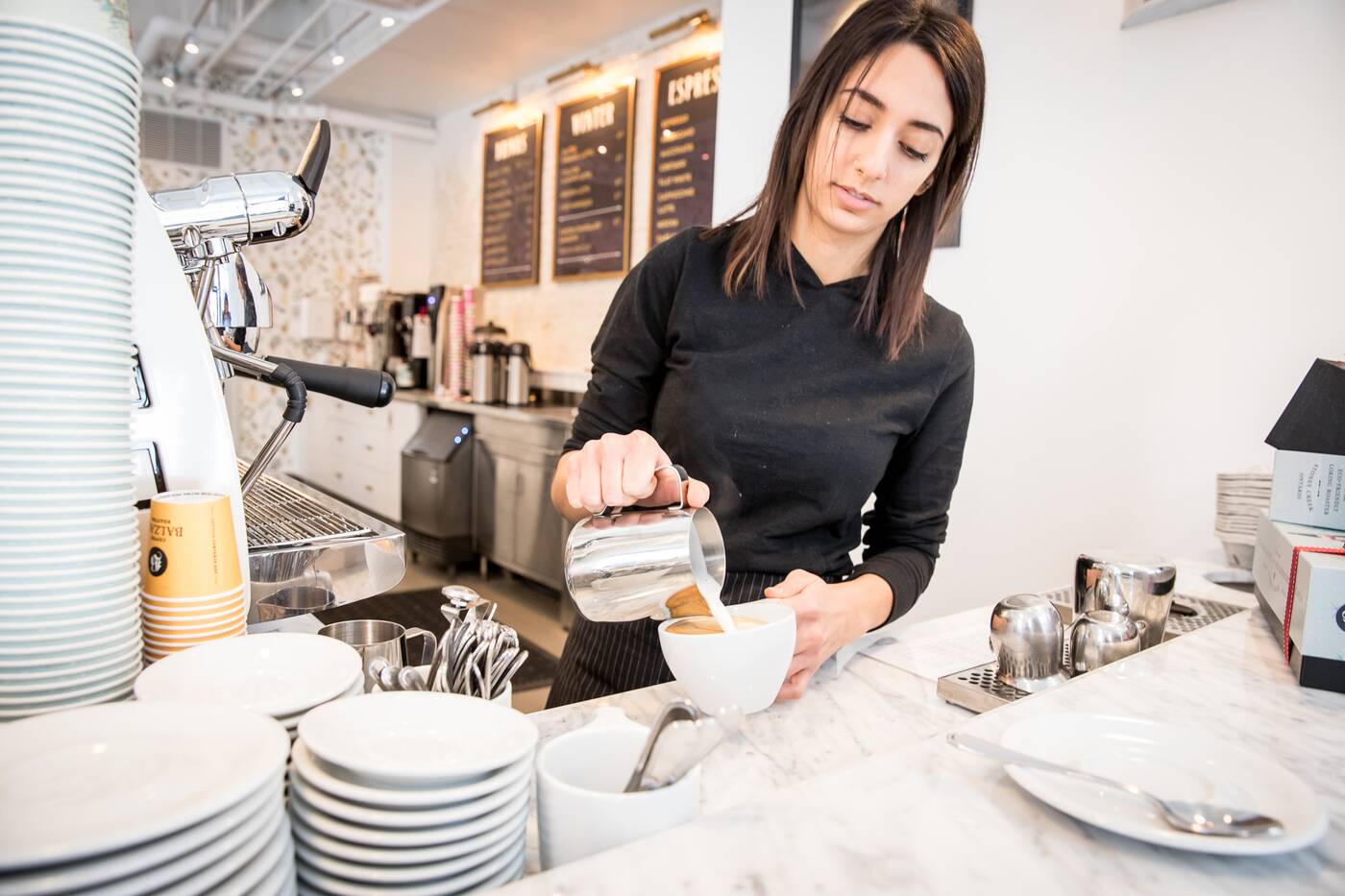 I get a latte ($4.50) that uses Balzac's medium "Amber" roast, fair-trade, organic espresso blend. It has a deep flavour that pairs well with the Harmony Organic steamed milk it's topped with. 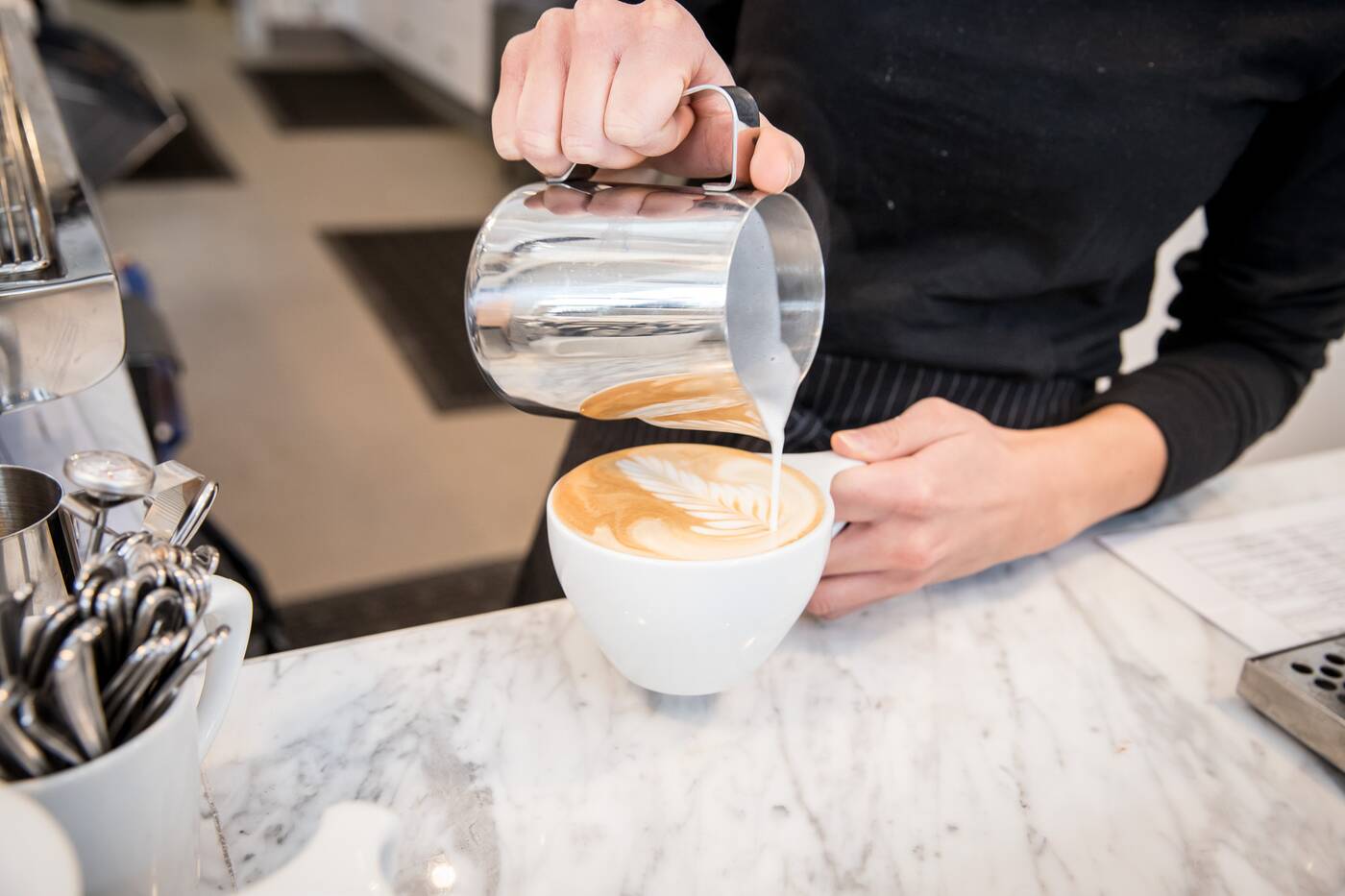 Sadly, my lactose-intolerant friend orders a latte with almond milk, and he wishes it weren't made with Almond Breeze. Oddly enough, Balzac's uses Pacific, my friend's preferred lactose-free milk brand, for its soy and coconut milks, but not its almond. He tells me he can taste the difference. 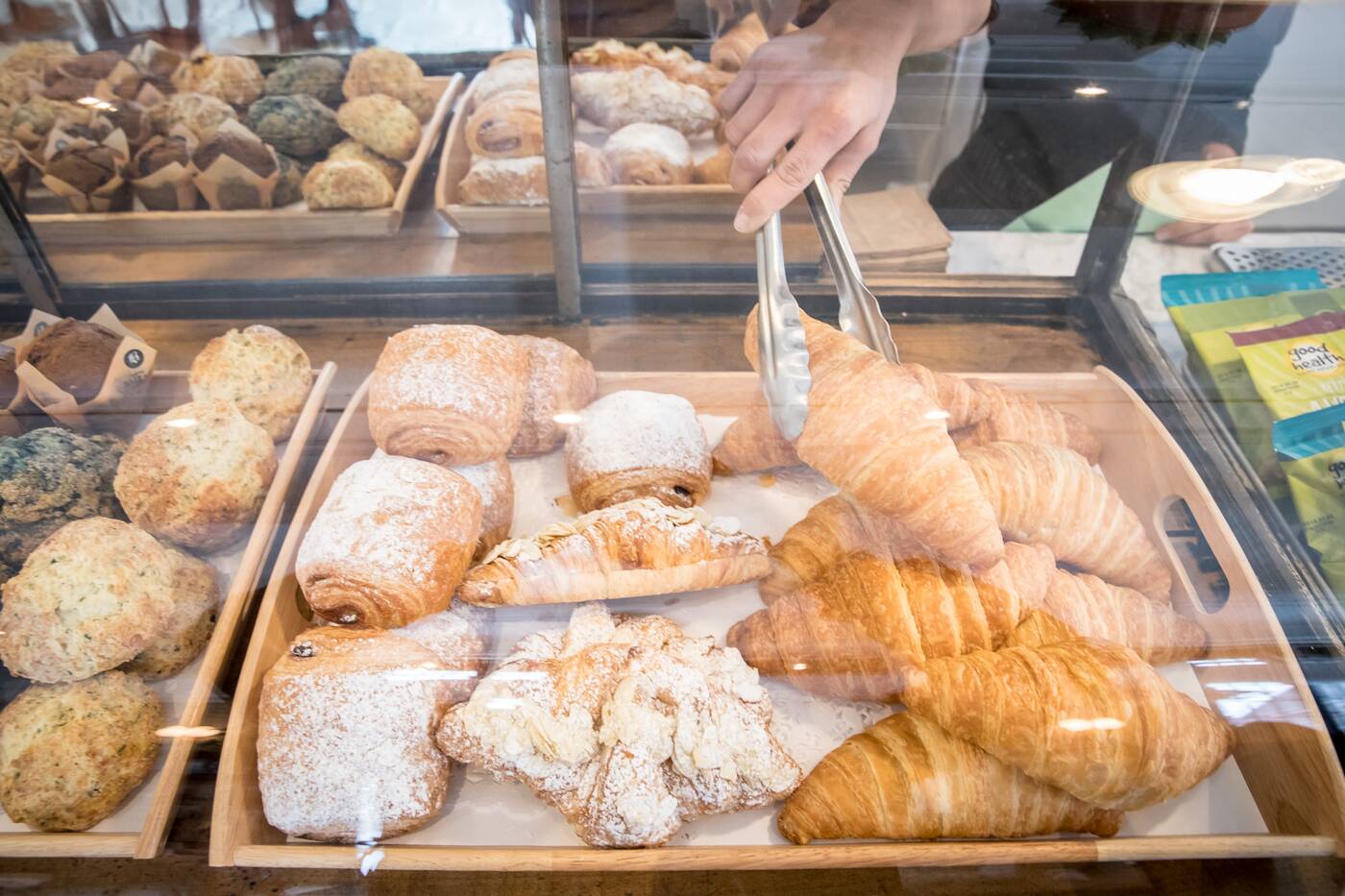 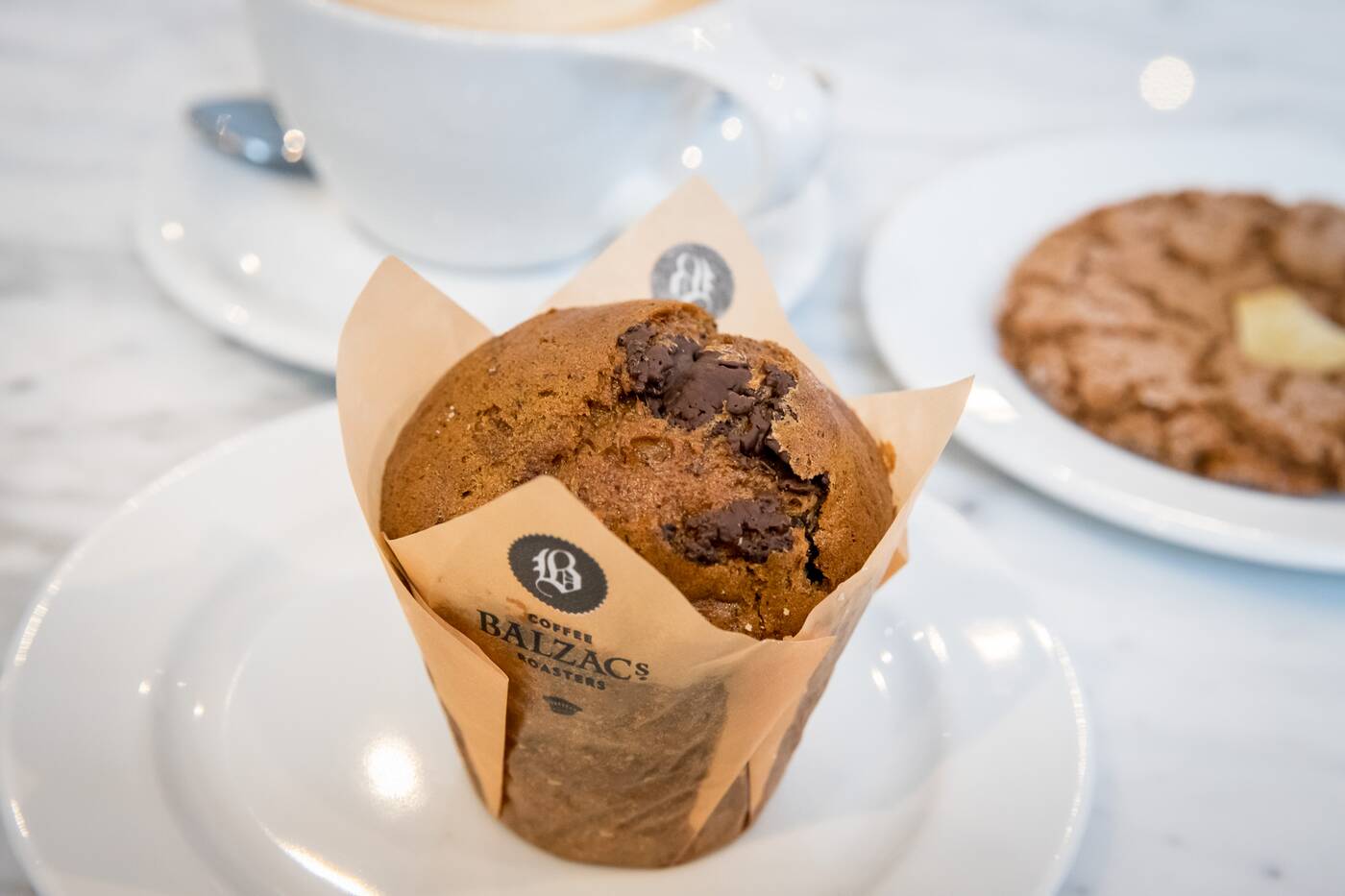 We try a chocolate chip-banana muffin ($2.75), and it really hits the spot: it's not too sweet and has the perfect balance of chocolate chip and banana flavour. 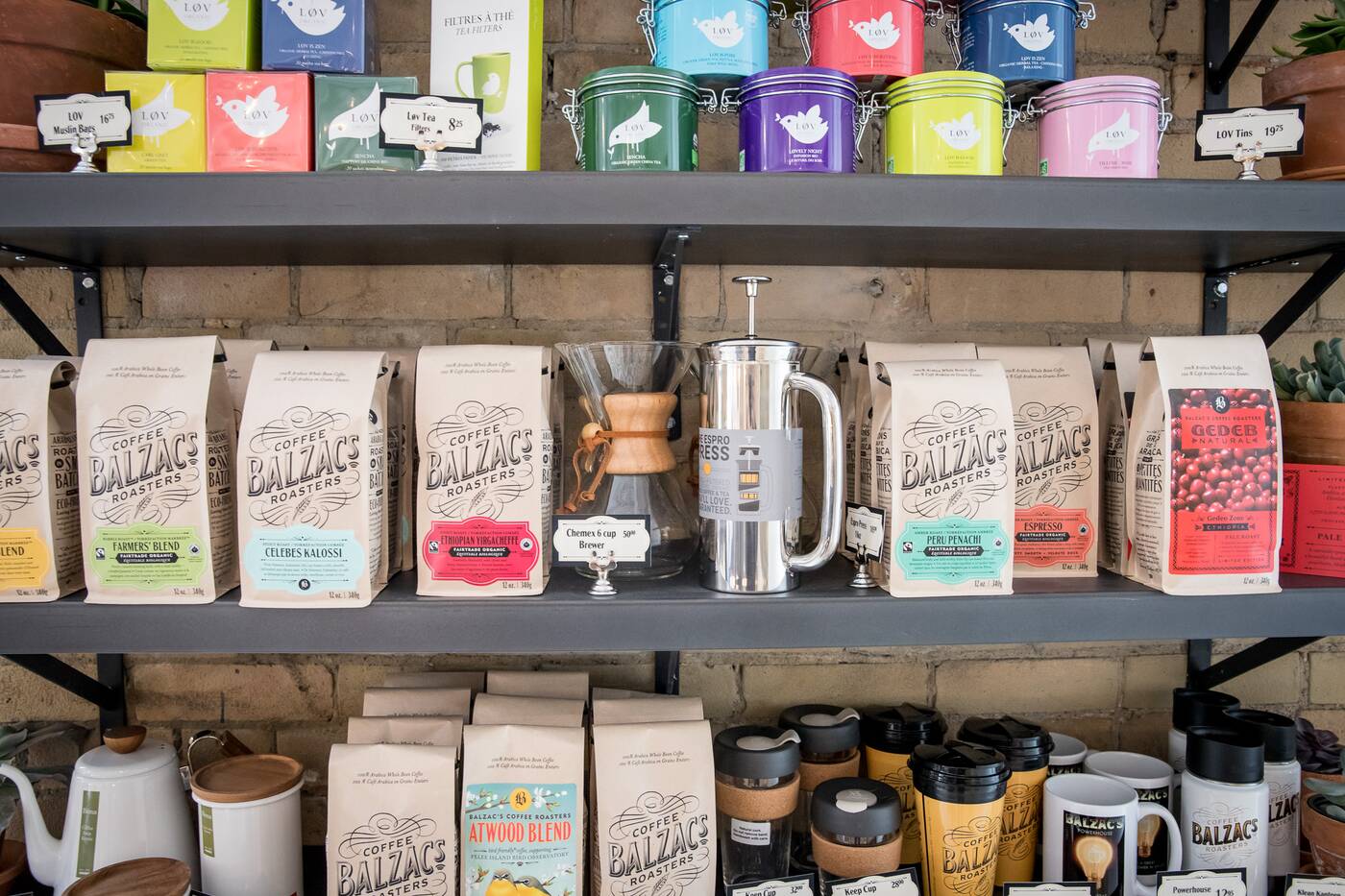 A shelf full of merchandise that includes organic teas from Løv ($16.75) and bags of Balzac's roasted coffee beans ($16-$18) are on display and available for purchase. 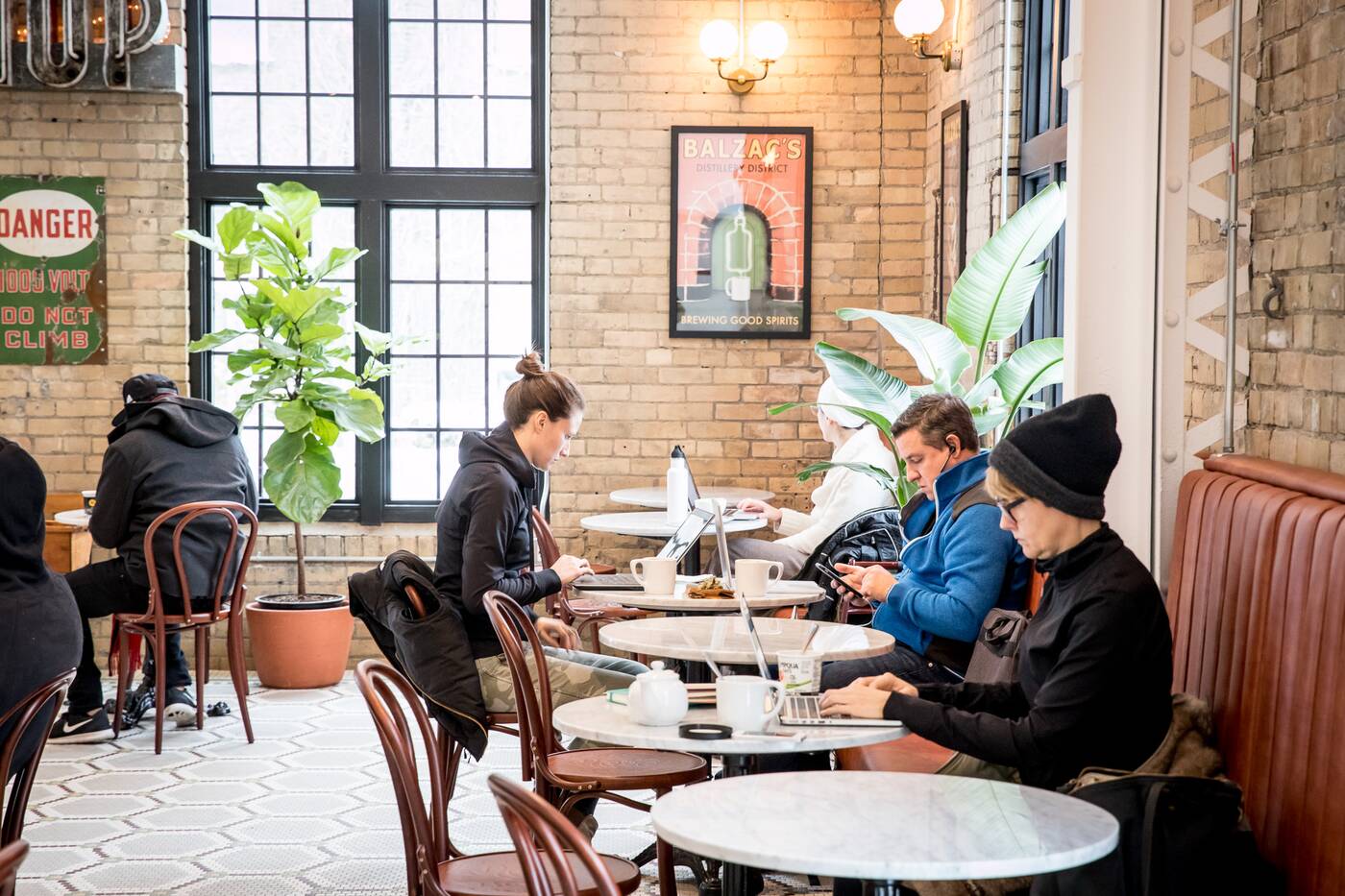 Olsen seems to have a real knack for opening Balzac's in areas that are up-and-coming (see: Distillery, Liberty Village), and in historical, interesting spaces. This one is no different. 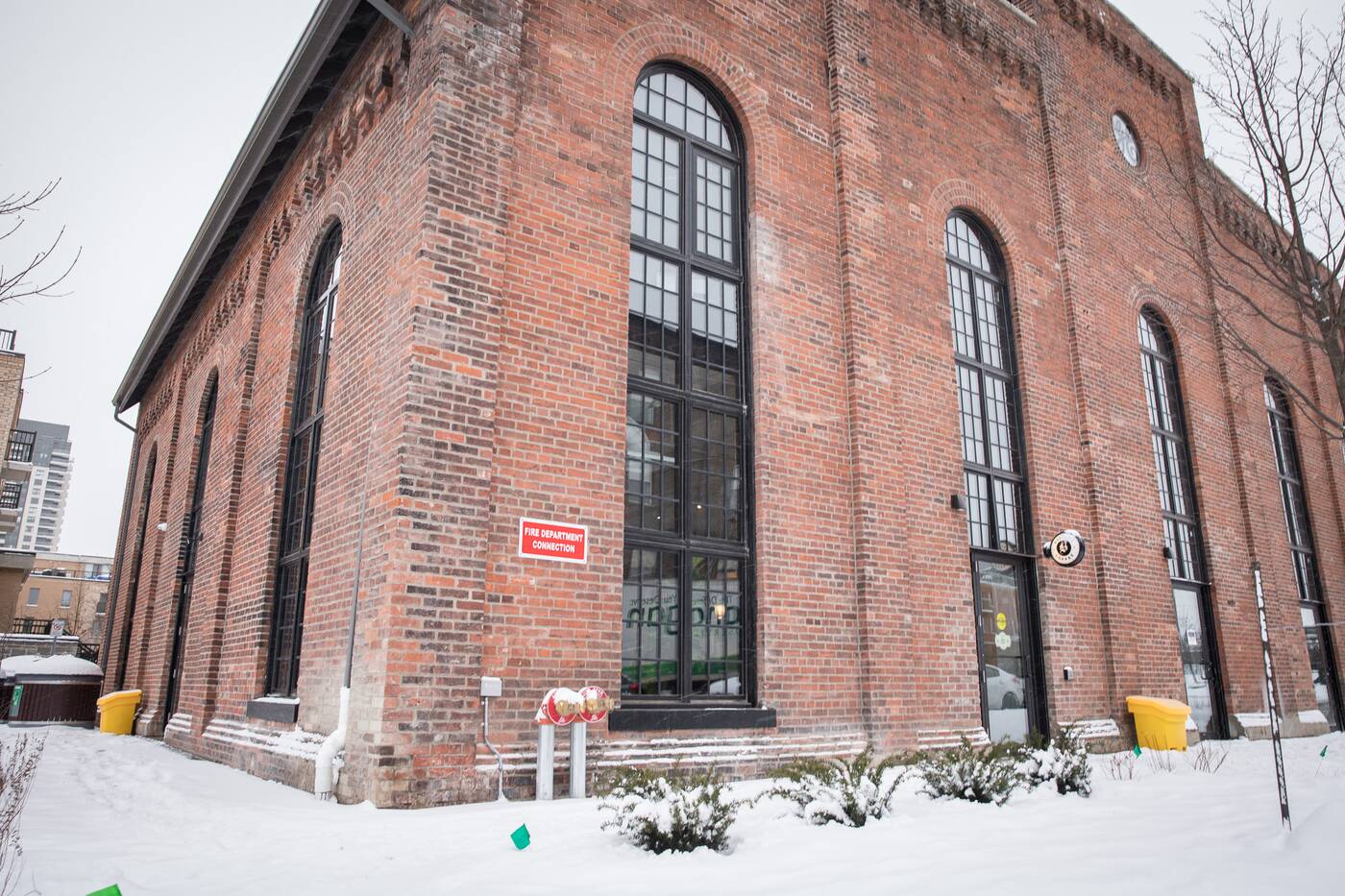