When the Annex area JJ Muggs/JJ Albany's/Albany's finally bit the dust last year, I wondered what would take its place. The Bloor West & Albany Ave location is a big storefront with huge patio potential, so a new resto or cafe would be a shoe-in. Then again, the Annex needs another restaurant (let alone sushi place) like it needs another poor university student... there are already far more than this neighbourhood knows what to do with.

I walk in and my first impression is, well... I'm impressed. The cafe has much better atmosphere and design than a stale Martha Stewart inspired Starbucks, and the almost Parisian red/black/chrome interior is a step up from Second Cup's various shades of le brown... though SC does score points for coziness whereas Aroma can feel a little too slick.

Every other table is appears to be equipped with a blogger of some kind (ok, just 'net-users, but who knows) as a free WIFI pass code comes printed on each receipt. 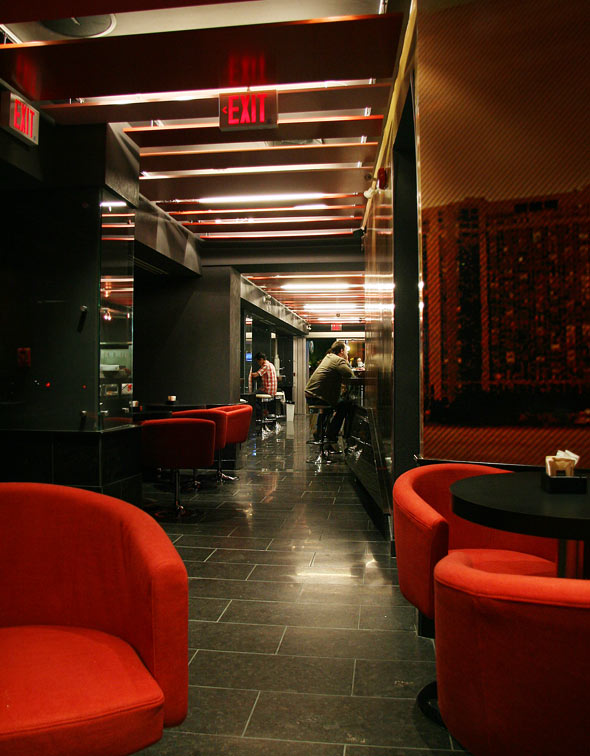 Unlike the major North American coffee shops across the street, Aroma is not banking on inventing new pseudo-coffee concoctions every month (as good as some of those might be). They're sticking with absolute coffee classics . 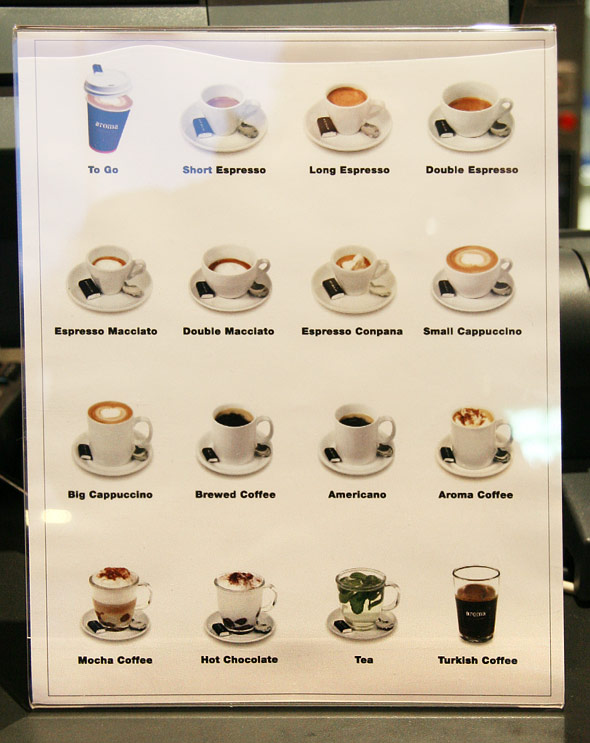 The chart pictured here, sits on the counter and while there is a real menu board up on the wall, this is about all the aide you need.

No, you aren't on Corso Italia, this is still the Annex!

As usual, I've brought some friends to sample the new place with me, so we put in our order and soon our names (yes, like they do at Lick's) are called out at the counter so we can pick up our order.

It's a nice personal touch (even if the spelling was a little atrocious) and perhaps better than someone shouting "MOCHA" and 3 people show up to debate whose cup it is. At the same time, the names are all printed on receipts -- one for you, one for them -- so there's a lot of paper going to waste. I hope they've got a grey bin behind that counter.

First up, a double espresso -- a solid kick of caffeine and flavour. Simple and likeable, I'd order it again, though I'm thinking the Turkish Coffee may be worth a shot next time I'm looking for a jolt. 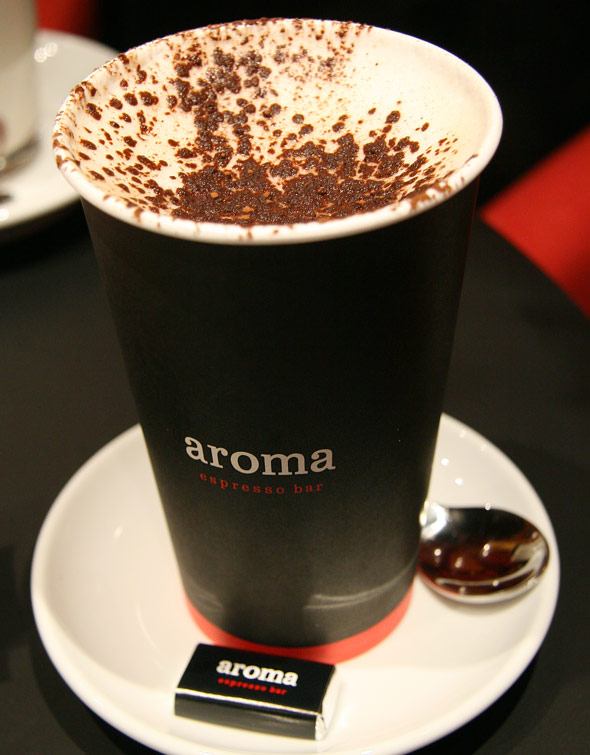 A large foamy Mocha is next and it looks great. When I can finally sneak a sip from my friend, I begin to understand why she's cradling it with such love. It's thick and blended really well. The testament to that is this photo: 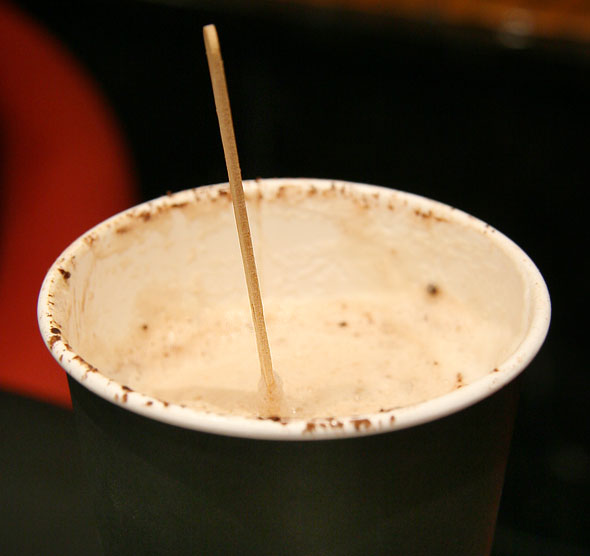 Even after drinking up some of the foam, a stir-stick still stands at attention in this tall cup of Mocha goodness.

You may have noticed the "Aroma" chocolate alongside that cup. It doesn't come with the Mocha, it comes with everything . Regardless of what you order, you get a solid little piece of milk chocolate on the side. Not a make or break item when choosing Aroma, but its nice to see that when you're paying a decent price for coffee (prices are similar to Starbucks in most cases) that you are actually getting that little bit extra in terms of quality and service.

From the non-coffee choices:

After tasting the chocolatey mocha, a full on Hot Chocolate was inevitable. This one had another friend just sitting there just taking in the aroma for a minute (how appropriate). While I poked fun, it's true, the smell of real chocolate, not bottle semi-chocolate syrup or powder, is a lovely thing.

Pictured at the top, you can see through the clear glass cup she's stirring, I wasn't kidding about the chocolate. Reminds me of the delectable Italian hot chocolate at B Espresso on Queen East. 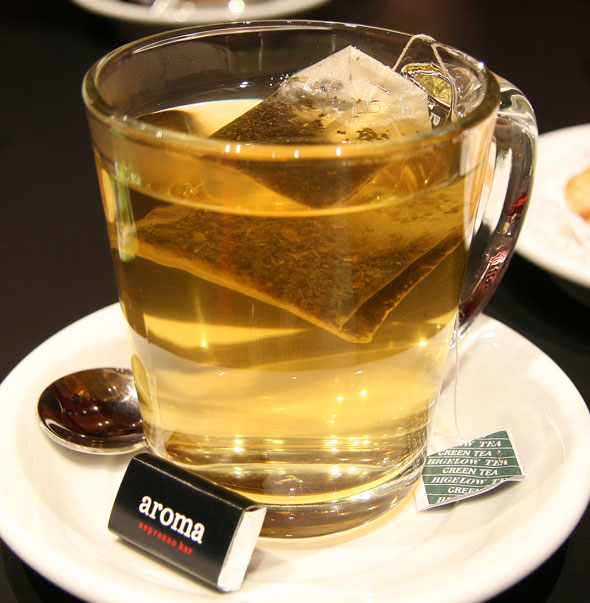 Tea, on the other hand, was nothing to rave about, but it was good, reasonable priced (one price for any size) and the selection was decent (5-6 types). Hopefully they'll be adding even more though as Torontonians are used to having a pretty wild selection of teas to choose from. 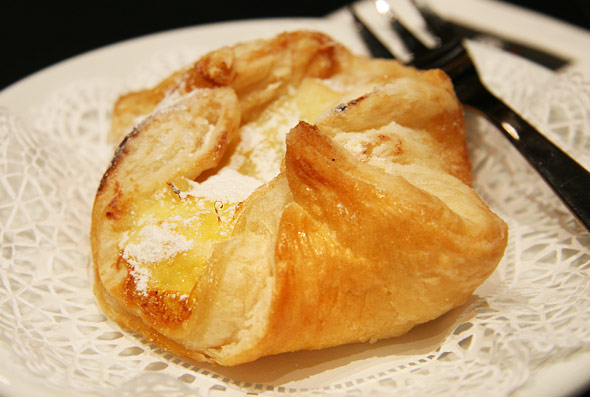 Aroma also offers some fresh-baked pastries as well as sandwiches and salads (all made fresh in-house).

Pastry-wise, the cheese danish is a flakey kind of wonderful whereas the mini cinnamon bun was under-baked... a little hit and miss.

The sandwiches and salads I simply have not tried yet, though I was surrounded at other tables by monster salads that looked amazing .

Looking forward to your thoughts on their food offerings. 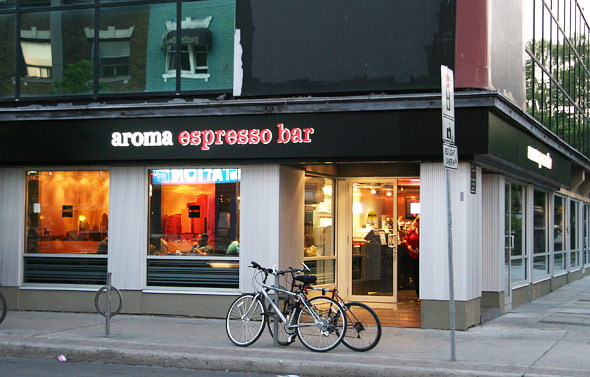