Unlovable is a dive bar in the true sense of the word, right down to its cheeky name, in an area of the city known for its drinking establishments. A simple whiskey and beer bar, you’re probably best off not inquiring about anything to do with mixology, sours, or fancy garnishes and bitters.

It’s affiliated with other businesses at the same intersection, Loveless cafe/bar and Unlovable General and Gallery, started up by Jamal Watson and Pol Williams of Sweaty Betty’s. 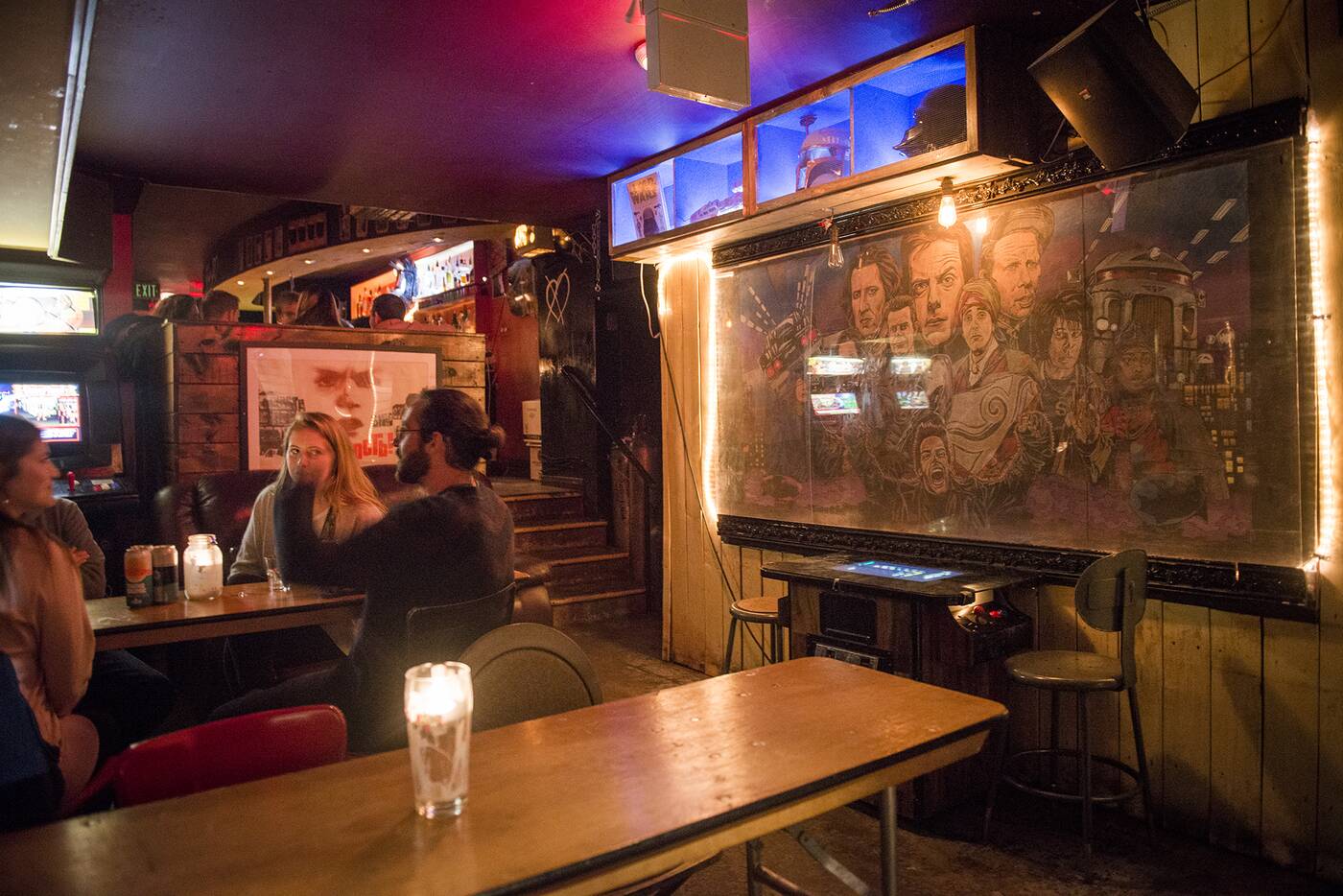 The bar pulls a one-two punch with its layout: spot it by the giant heart with an X through it decorating the slanted ceiling above your head as you descend a staircase to the basement bar, but once you’re inside, there’s a low seating area before you head back up another set of stairs to grab drinks. 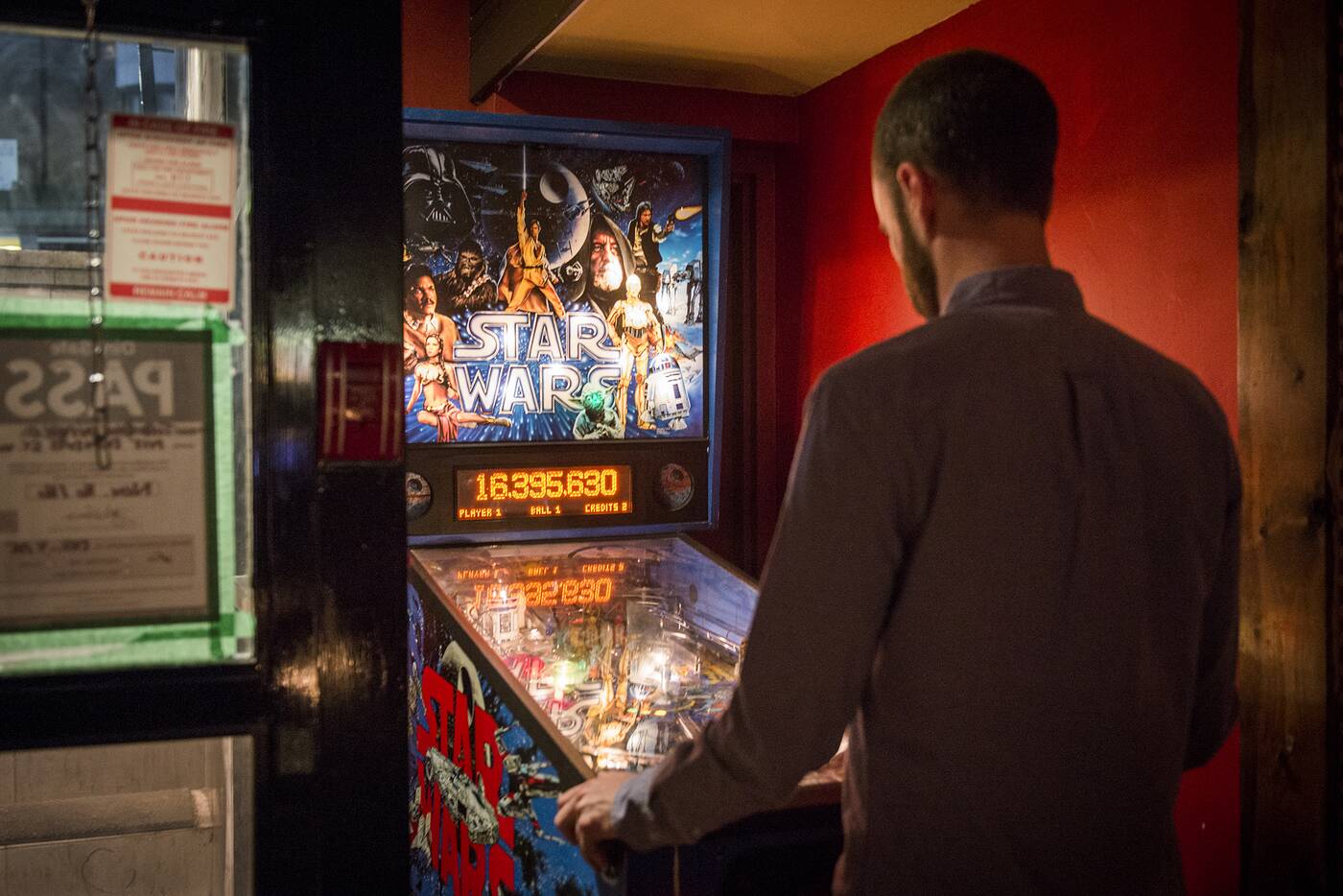 This place is a visual tilt-a-whirl of darkness and light, flashing pinball machines offset by speakeasy-style moodiness and funky seventies-style wallpaper. 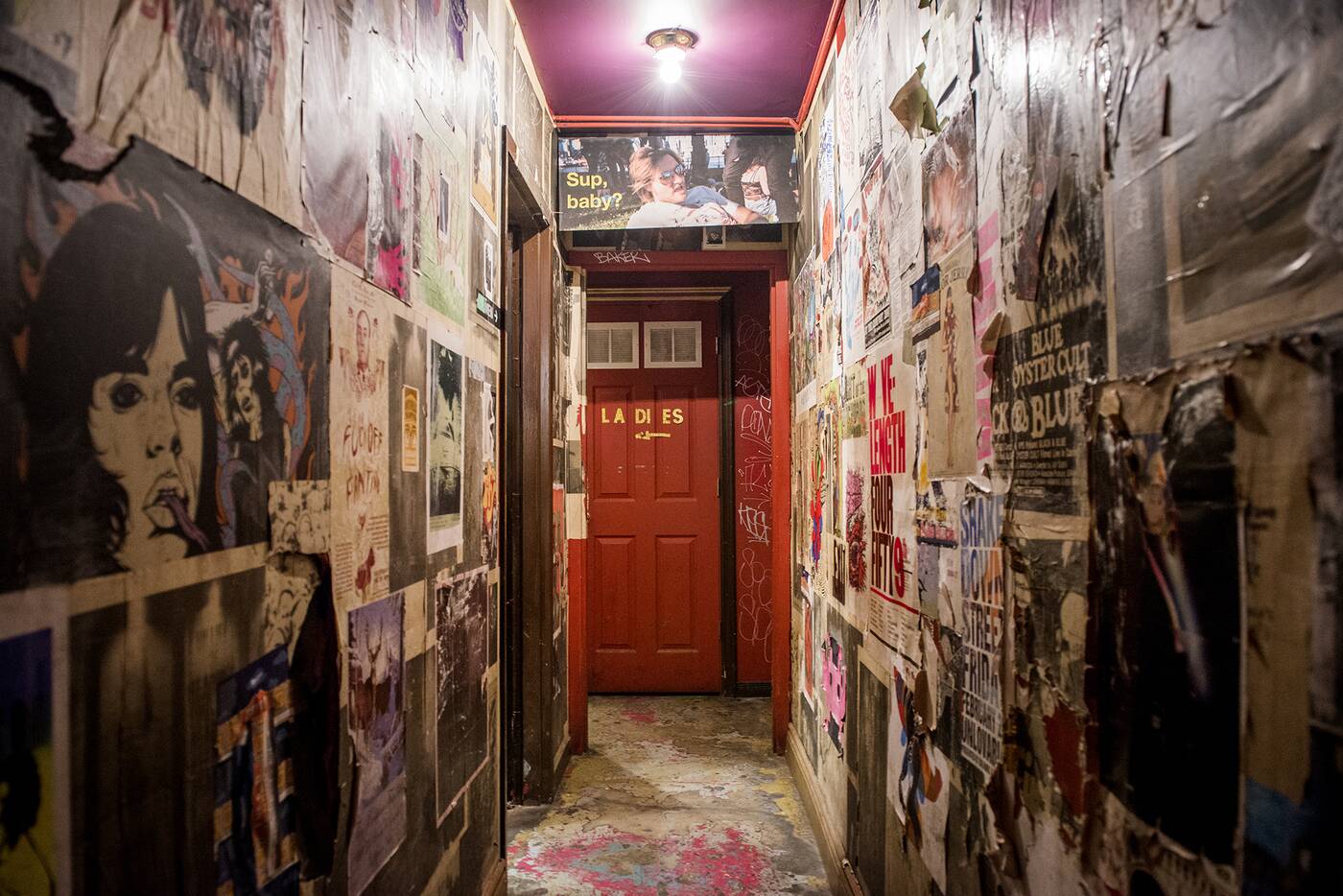 The hallway to the bathroom is wallpapered with various album covers. 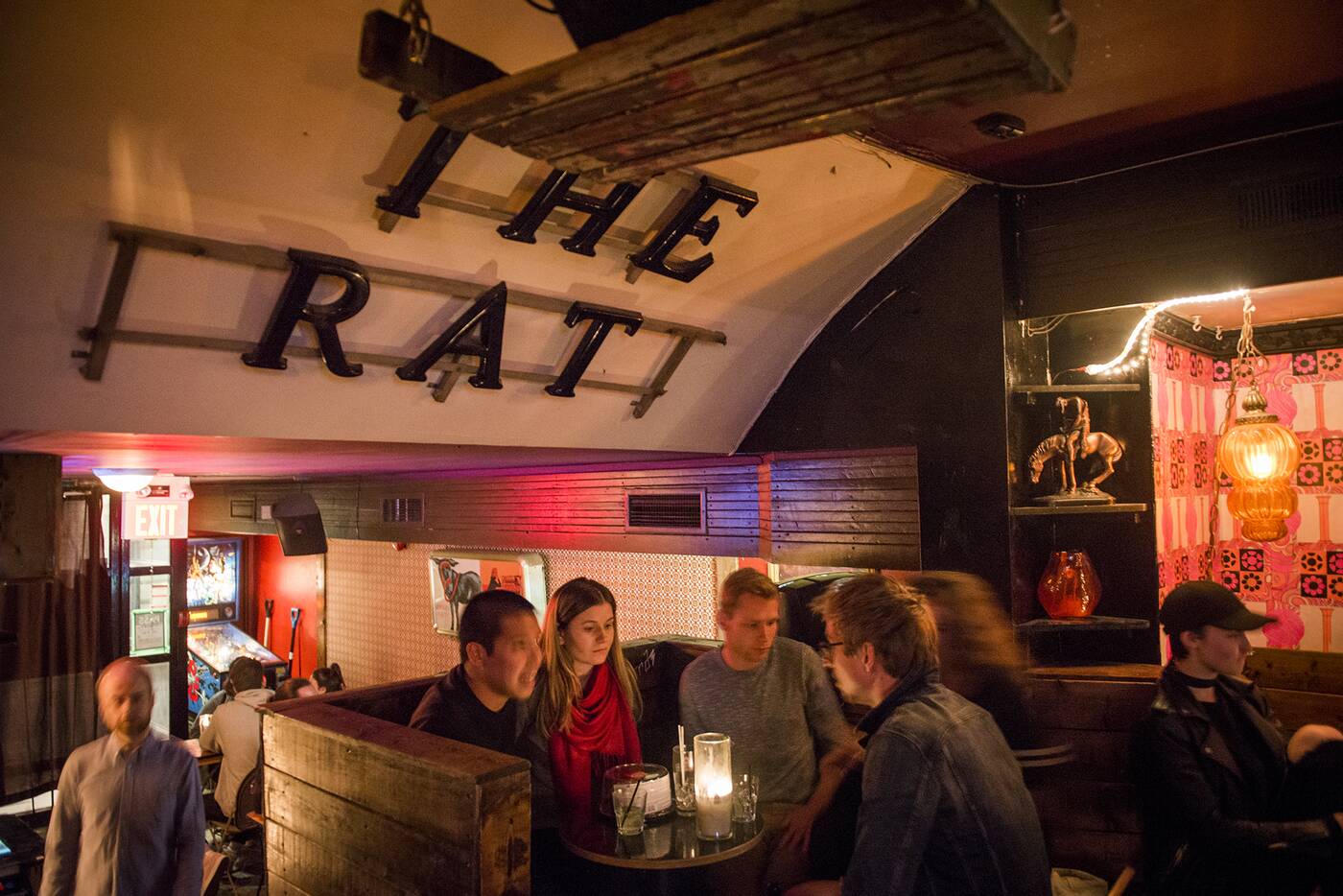 The bar has a private feel, an intimate collection of dark nooks, though that doesn’t stop the cool crowd from gleefully yelling their conversations as they swig drinks. A noticeable fixture is a sign reading “THE RAT” that looks like it was pulled from some kind of marquee, though my server isn’t sure of its origins exactly. 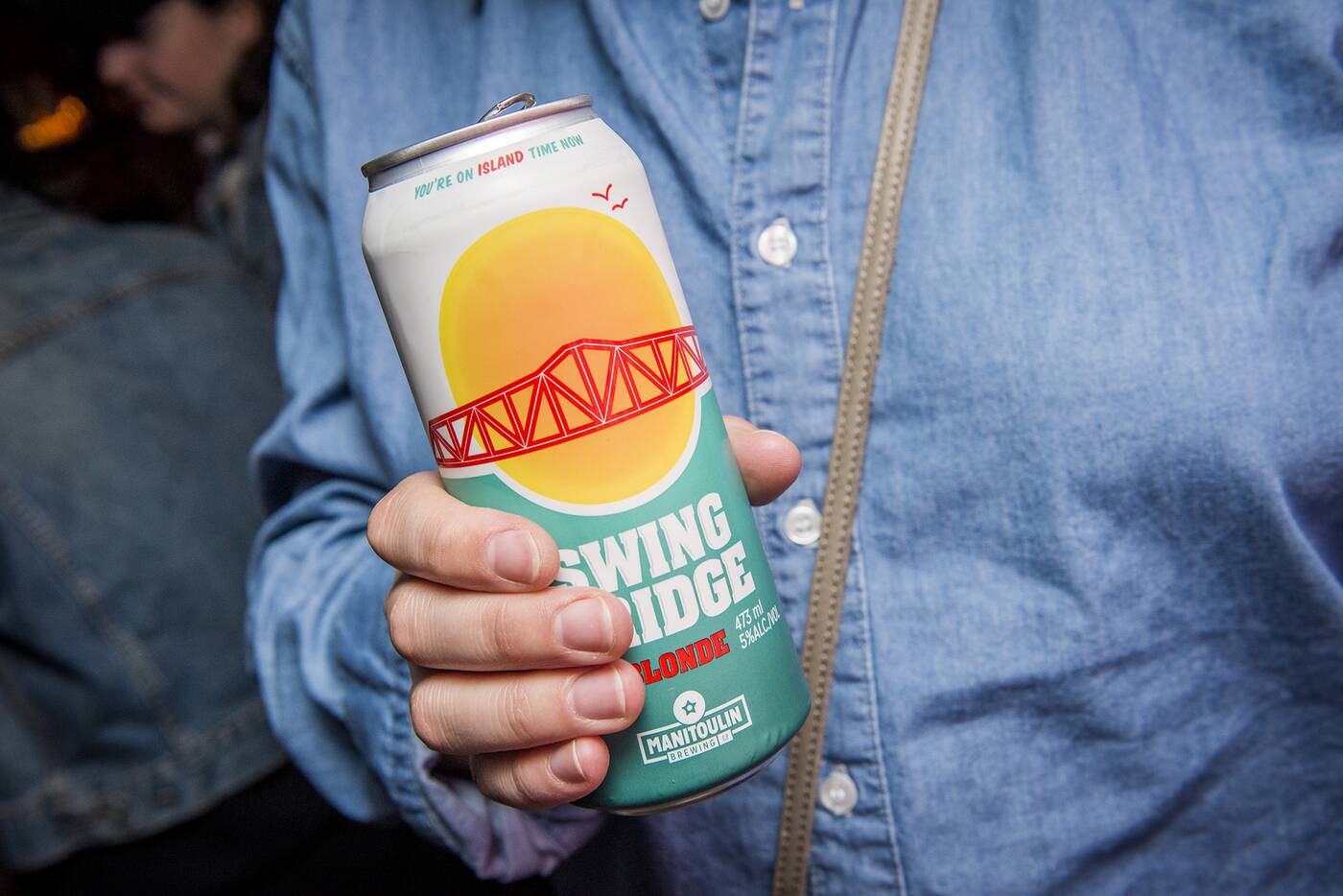 My drinking companion manages to snag a tall can of Manatoulin’s Swing Ridge blonde for just five bucks. Yeah, you read that right, a five-dollar tall can in a town where increasingly craft tallboy options can be $8 or $9 at the lowest end. Other choices include Ace Hill, Cameron’s Cosmic, and Brickworks cider. 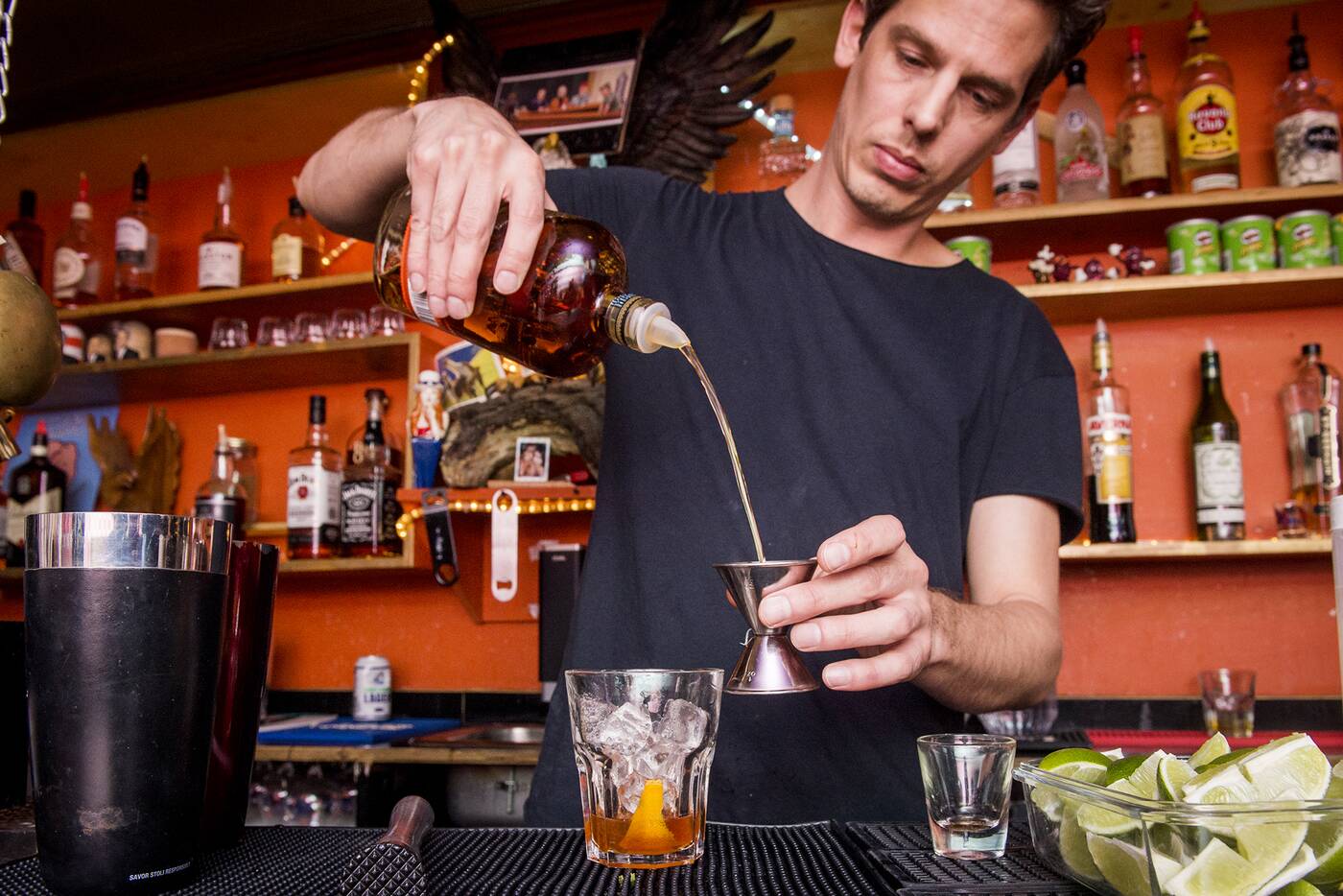 I opt for an old fashioned, the suggestion when I ask what the bar’s signature drink might be. 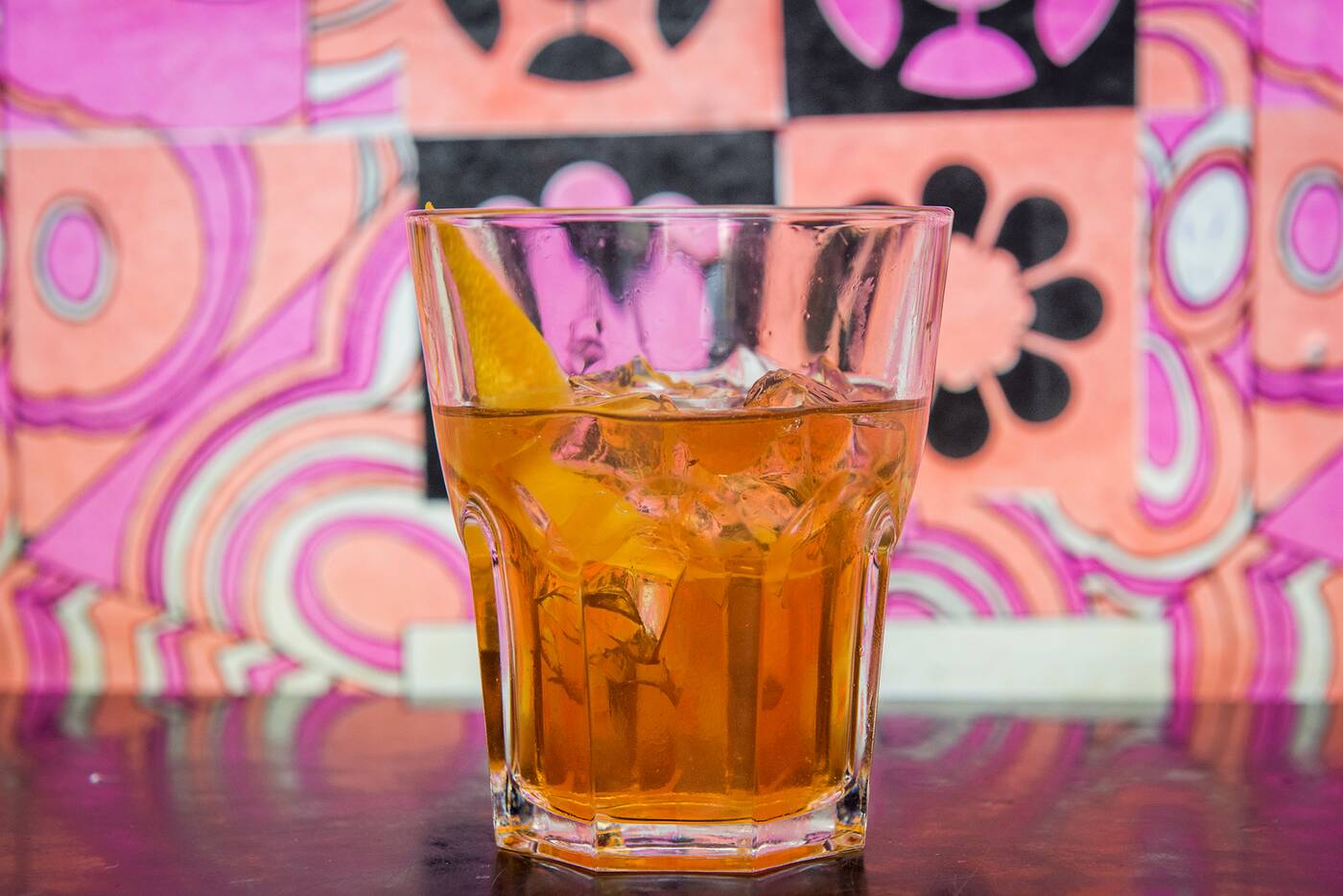 These bad boys go for $12 all the way up to $18 depending on the type of bourbon (I went for Bulleit, among choices like Writer’s Tears, Lot 40, Bowmore, and Gooderham & Worts). 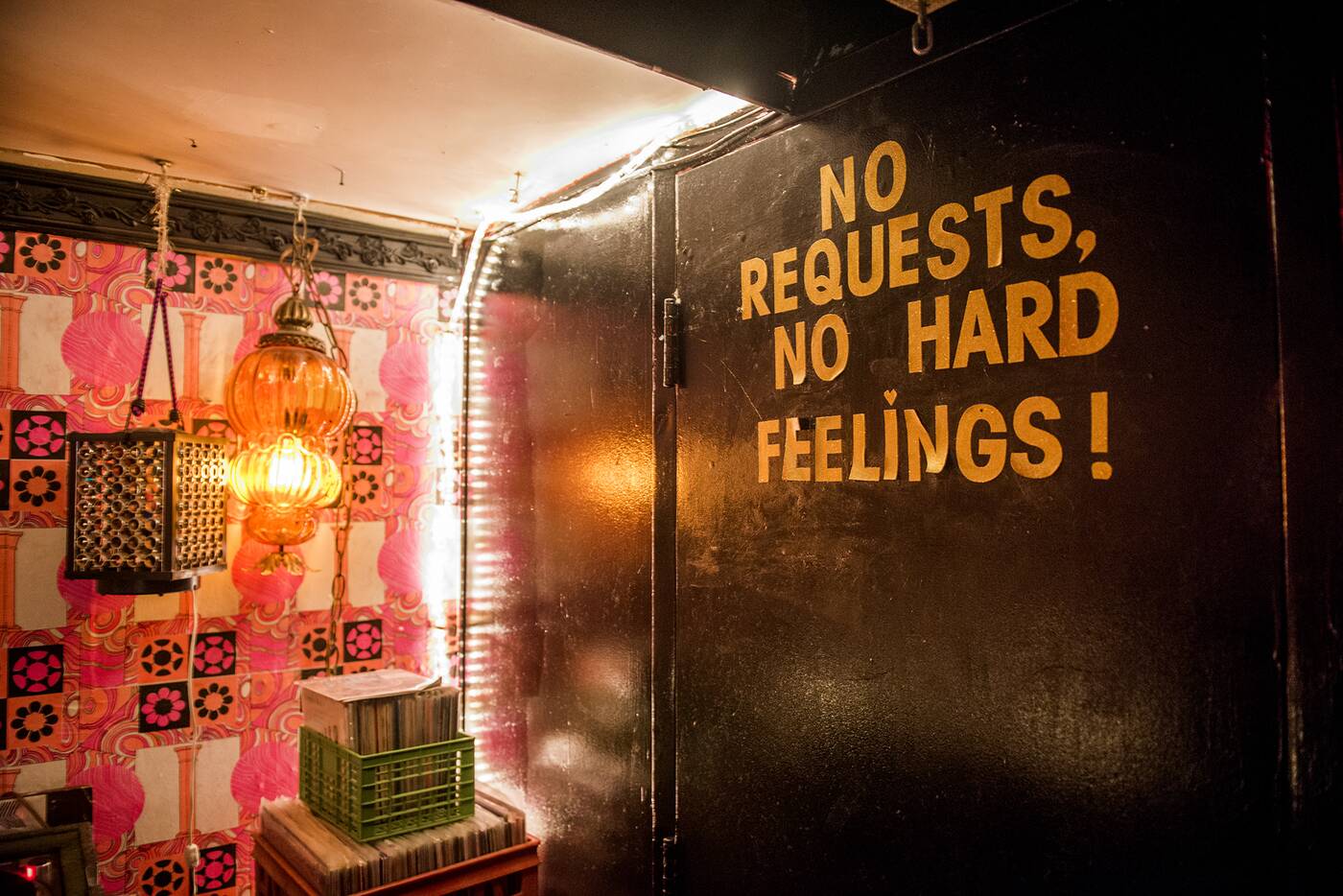 Lettering on the back wall behind the DJ booth reads “No requests, no hard feelings,” and this adage seems to apply to the place as a whole, though I’m sure first and foremost to those spinning. Best to heed this advice seeing as there’s no cover carge. 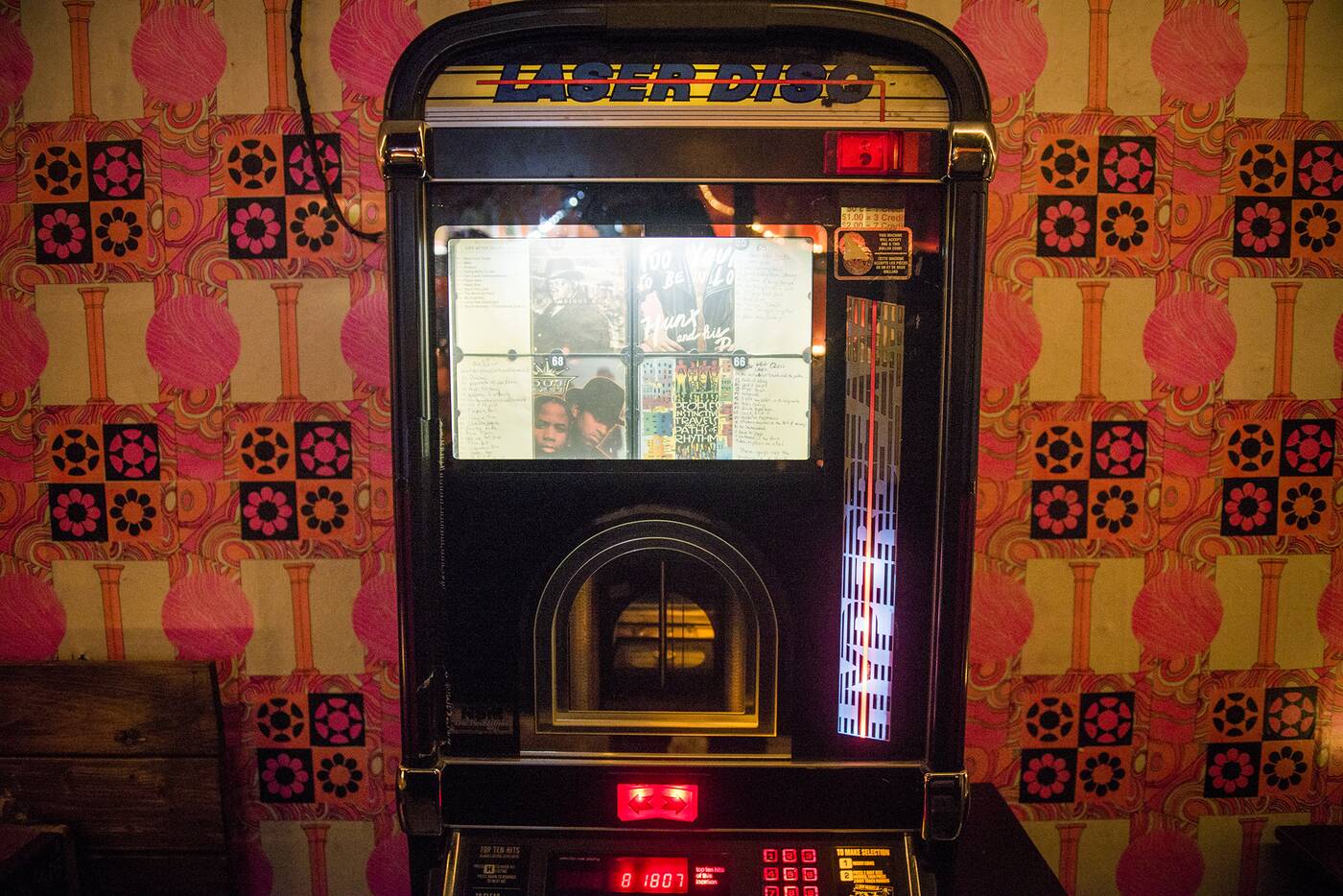 On the night I visited, the set was a chill mish-mash of random feel-good tunes kicking off with Pavement’s “Silence Kit” and moving directly into eighties jams. 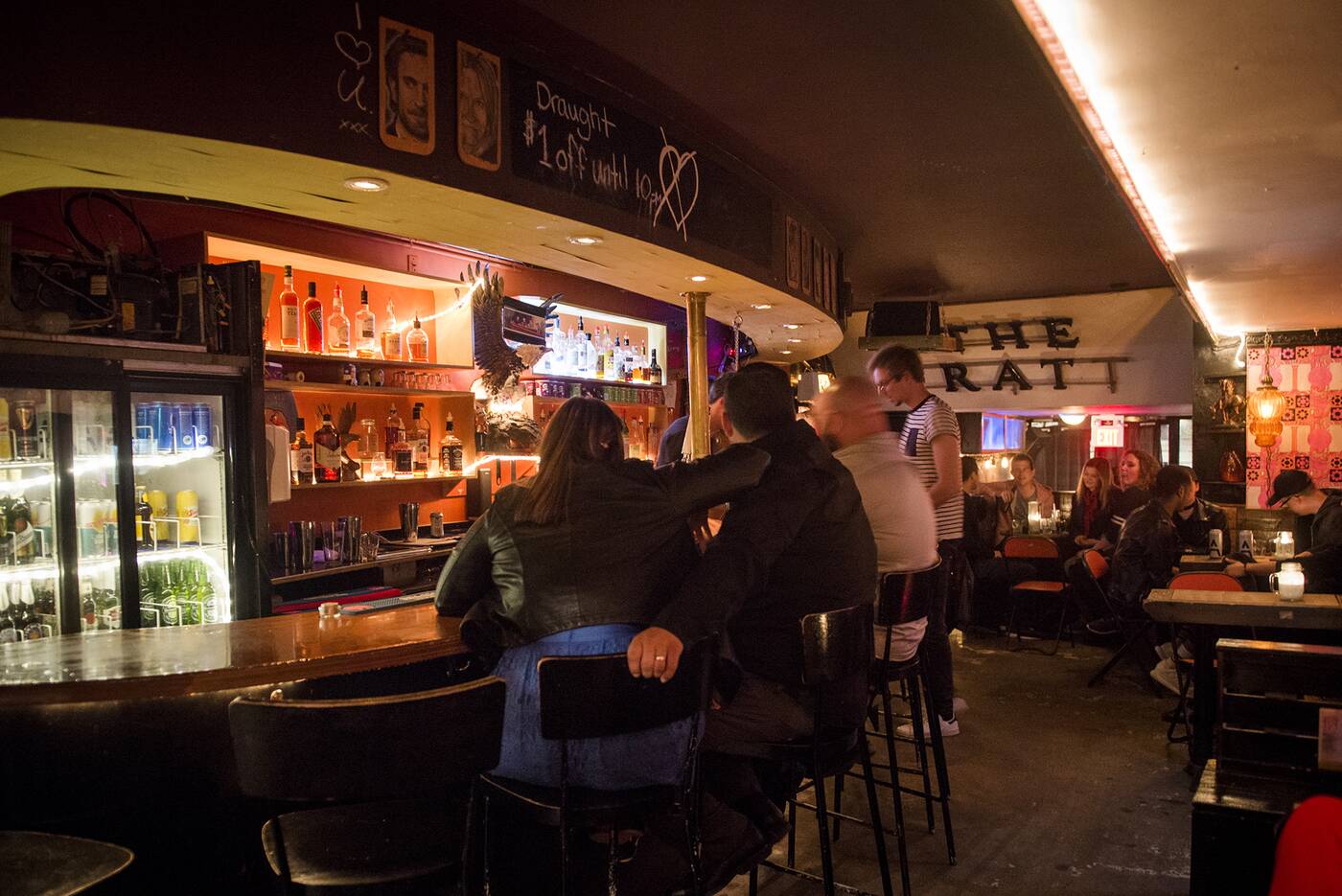 Unlovable is one of those bars in Toronto that has somehow made something really special out of really not trying that hard to be special, just its low-down, nitty-gritty self. 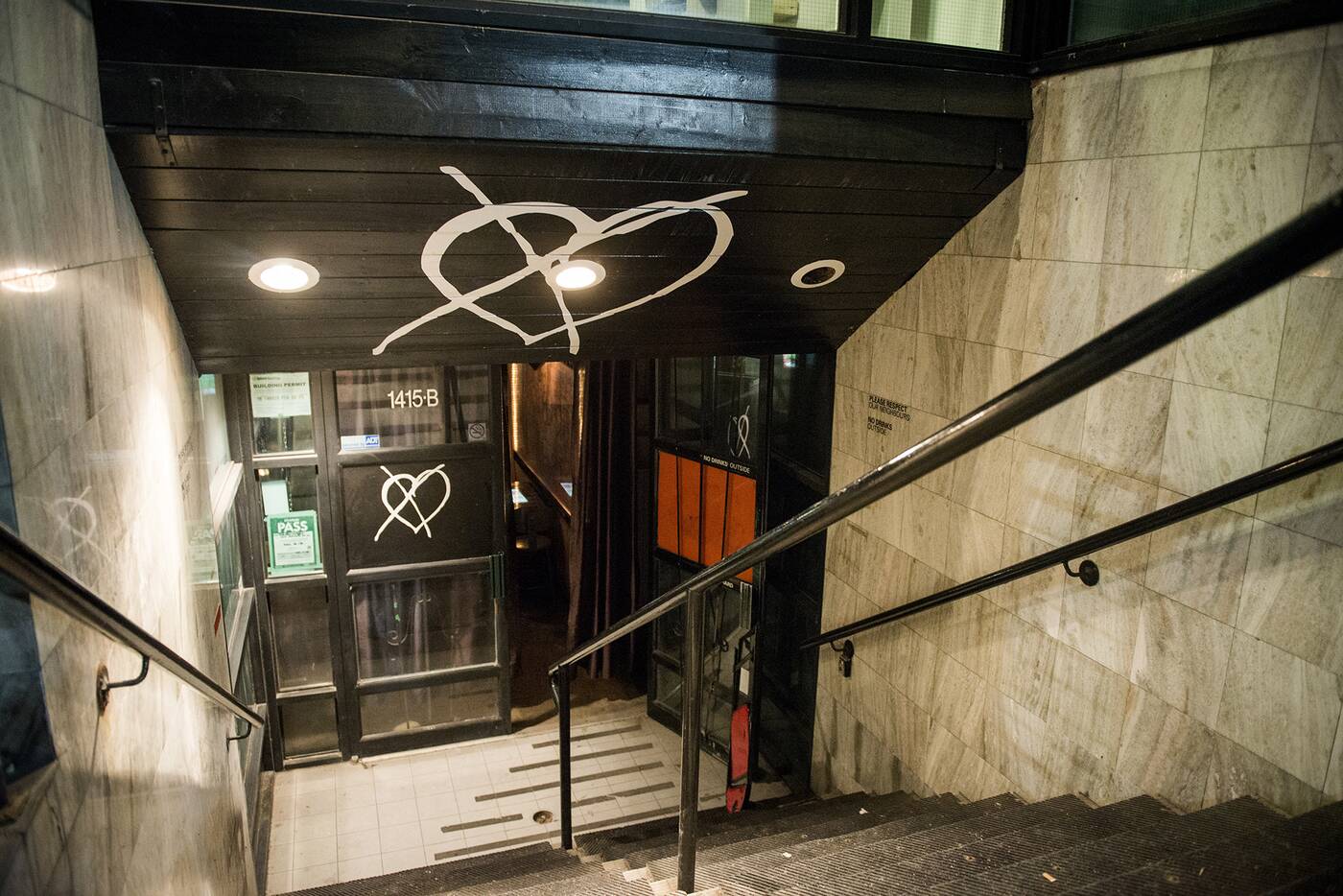