Housed in a former bottling area for the brewery, seating in the space with a capacity of 100 is provided by 12-seat communal benches. 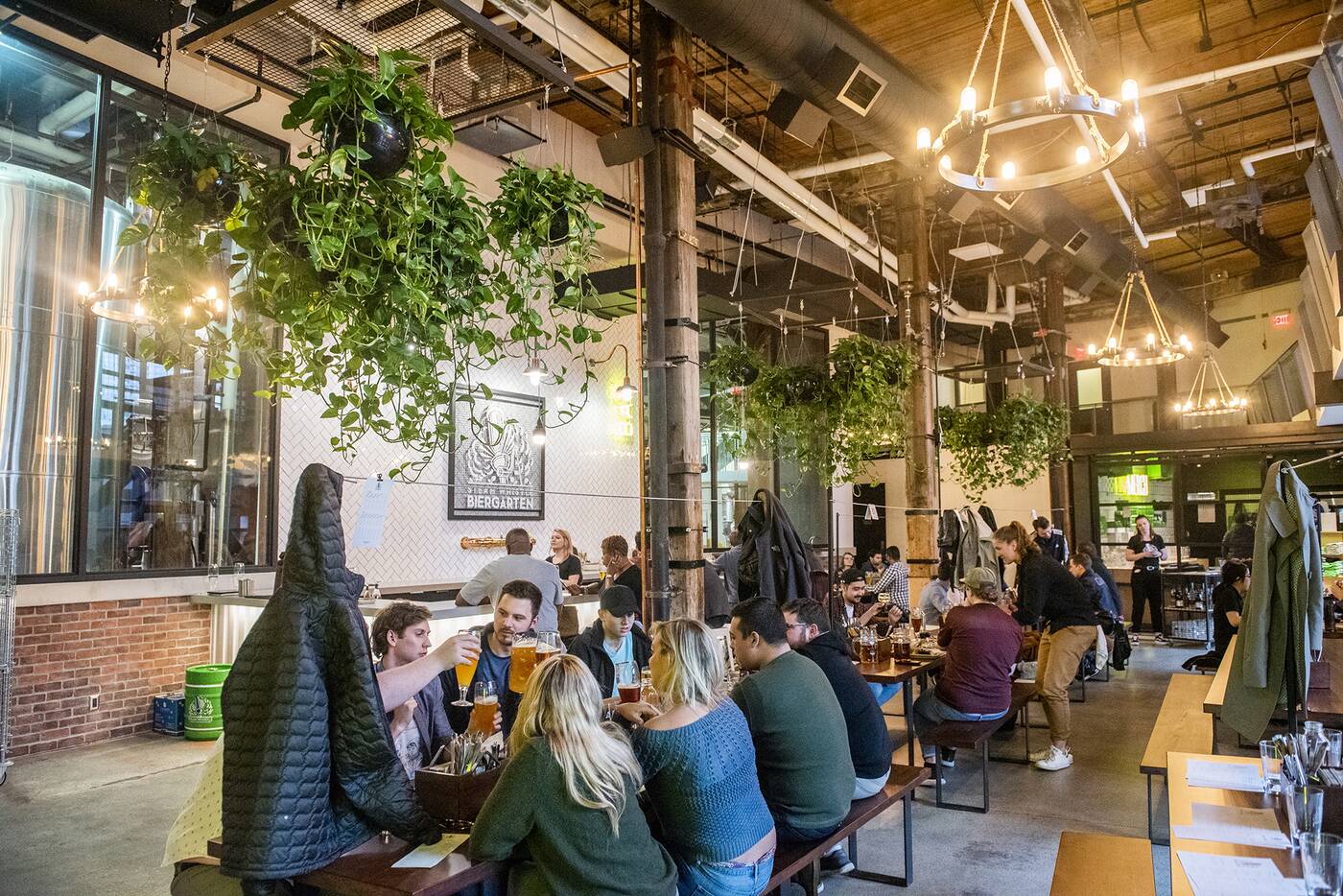 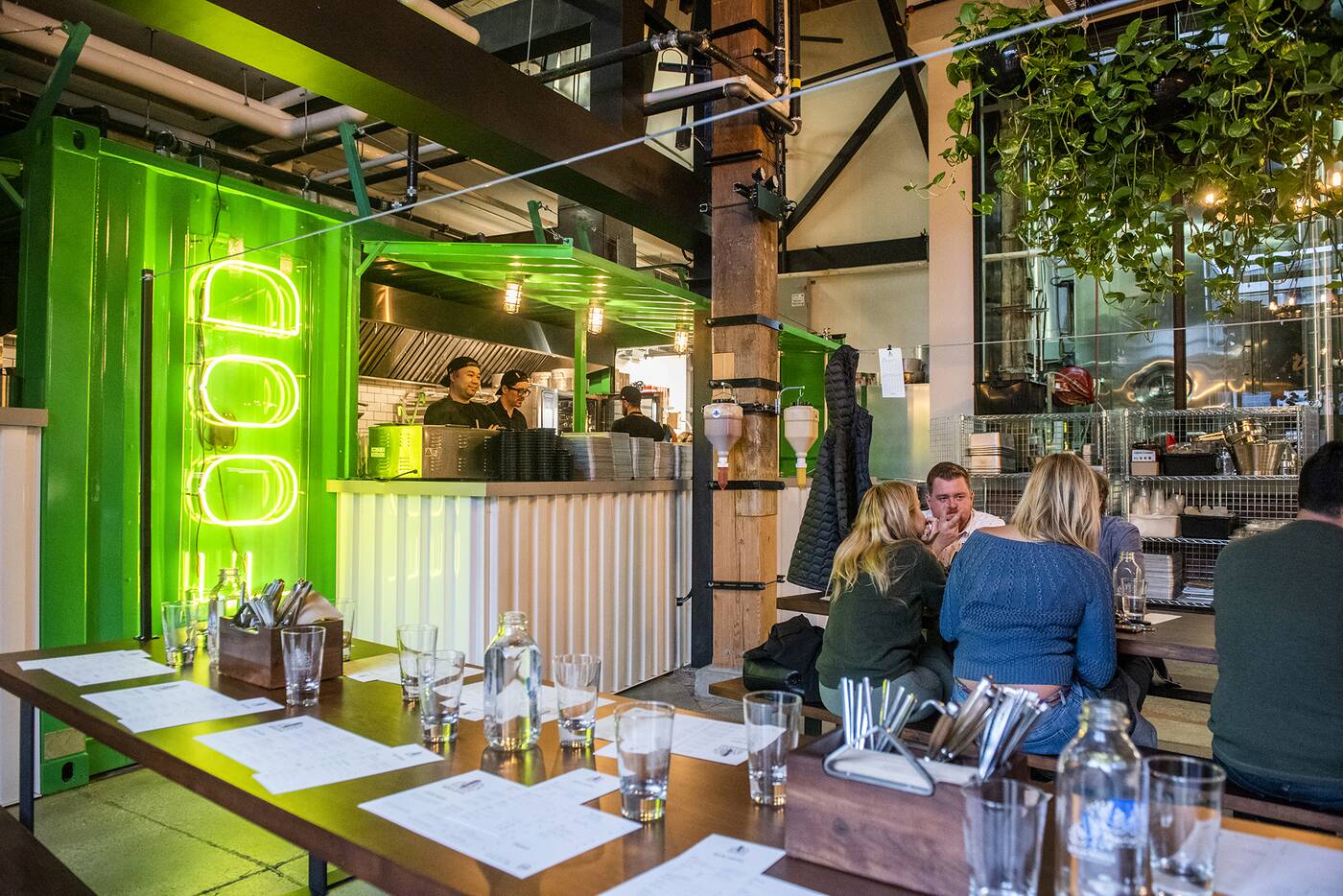 Place food orders at the stall and you'll get a number to hang on a line strung above the tables. 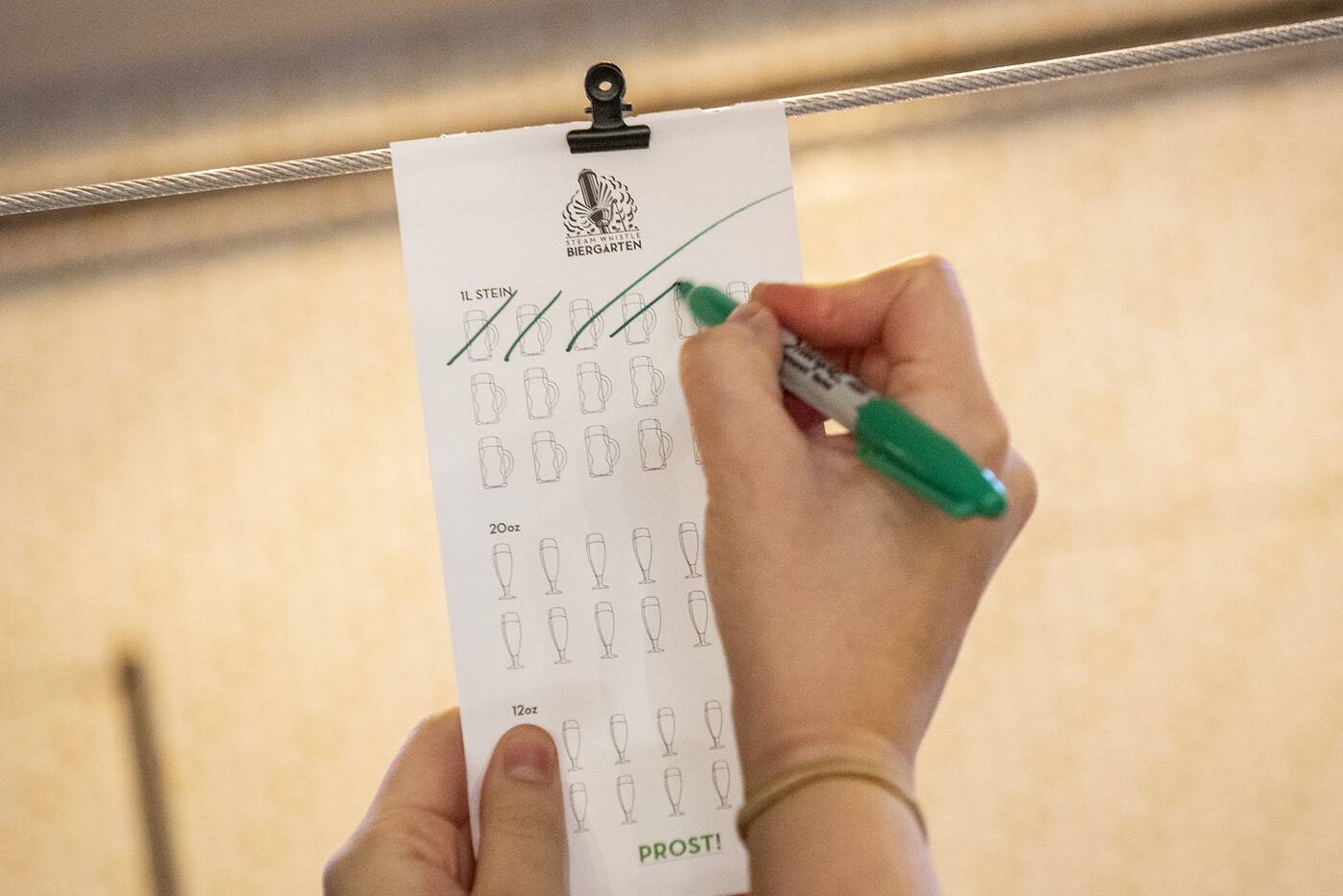 Cards that keep track of how many litre steins you've managed to empty are also pinned to these lines. 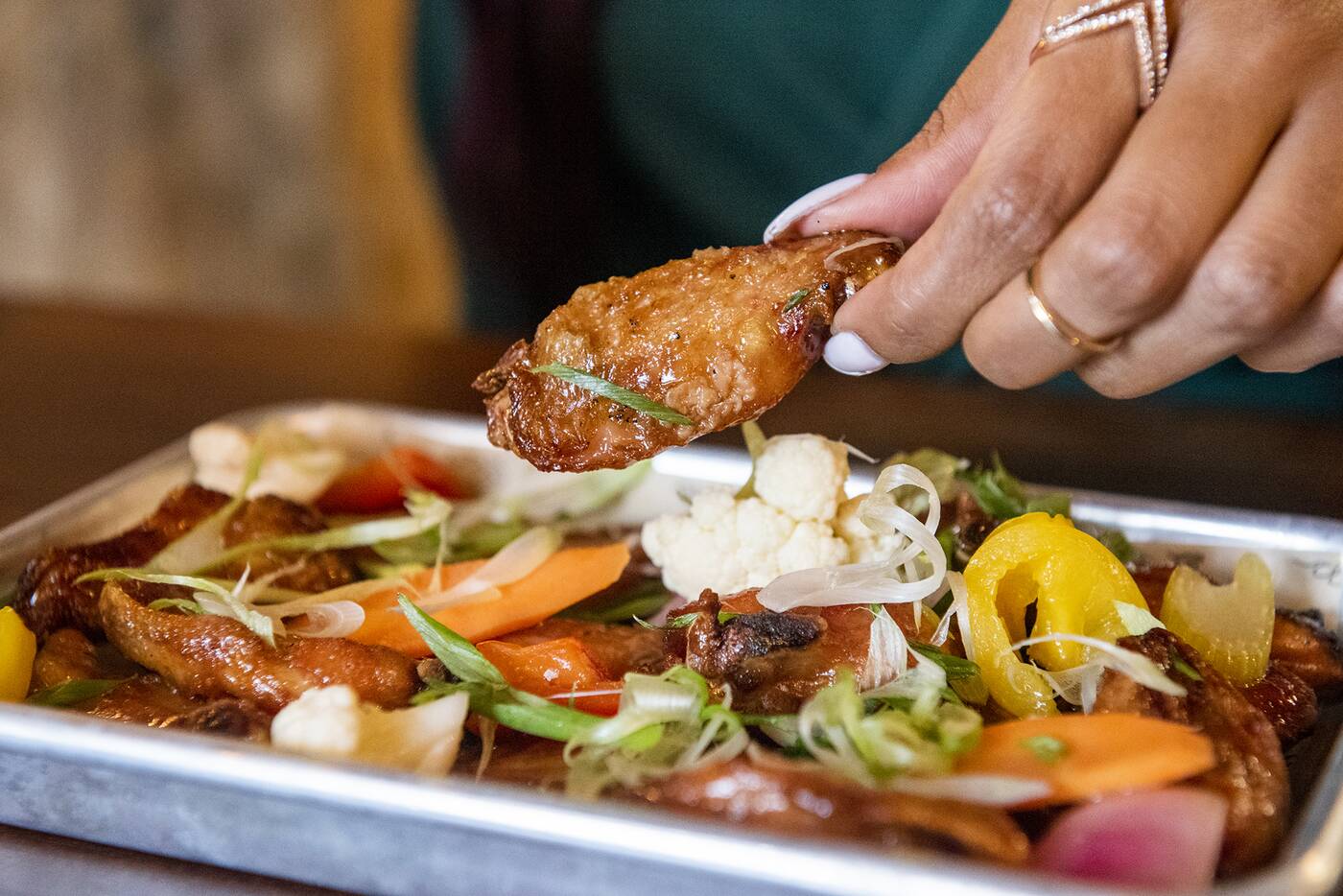 Smoked wings ($15) set the tone for a menu of food designed to encourage marathon beer drinking, a home run of spicy and sweet thanks to spicy mustard and maple syrup, scattered with an array of what the menu terms "pickled things" to break up the heat. 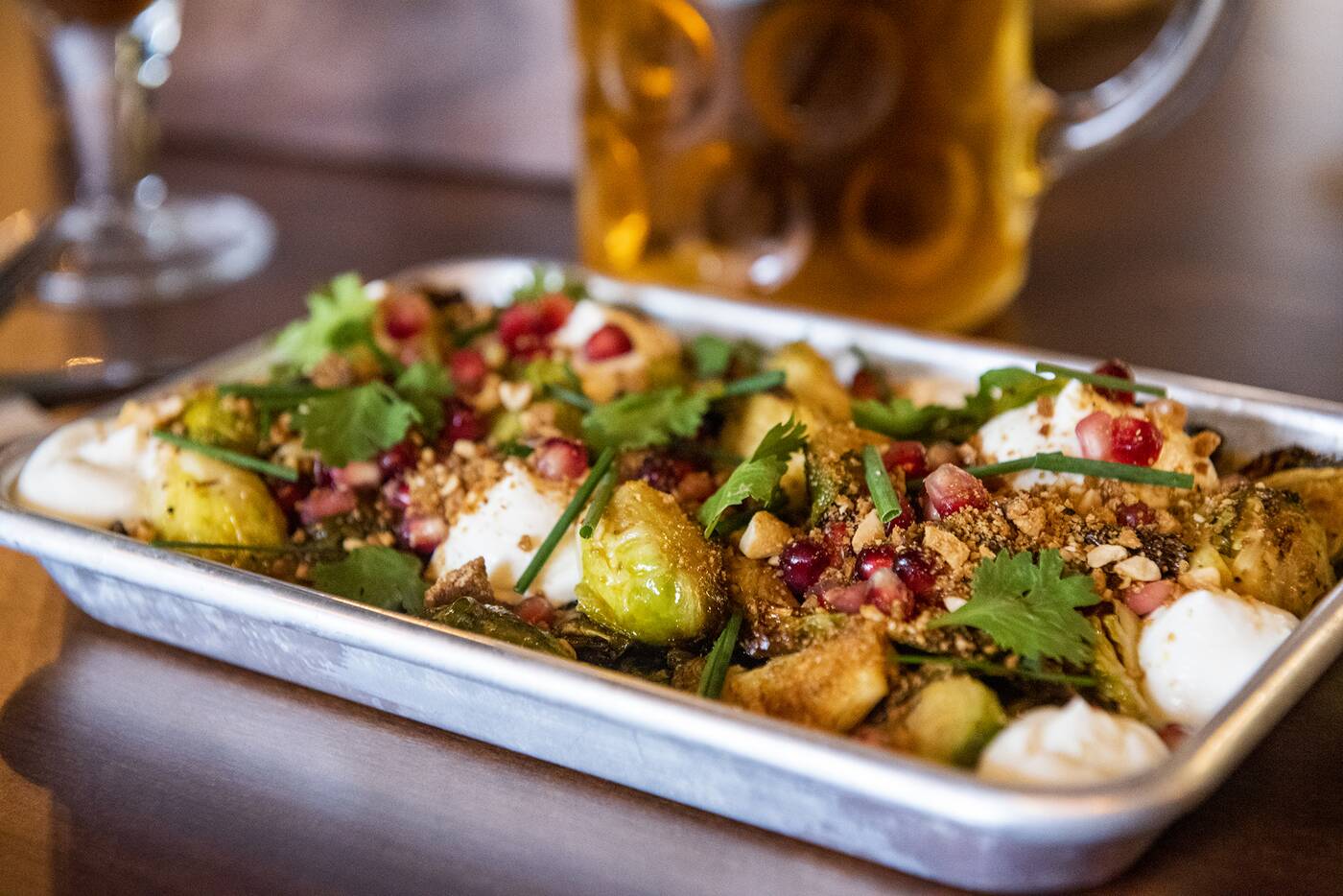 Roasted brussel sprouts ($15) are also a winner, the combination of Tabasco vinaigrette, beer nuts, clouds of citrus honey ricotta, and pops of pomegranate, cilantro and chive resulting in a similar sweet, spicy and bright effect. 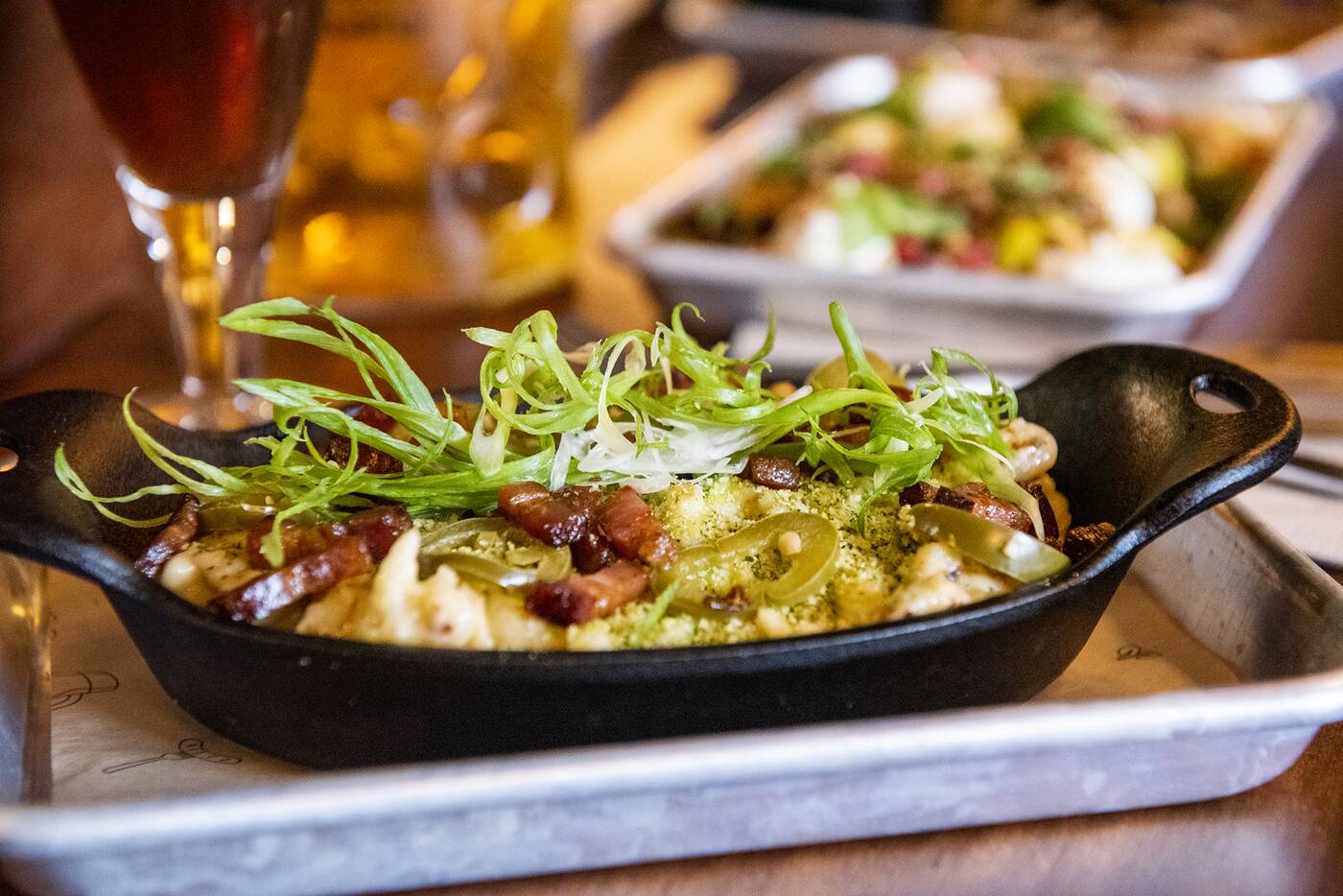 Spatzle n' cheese ($16) is the usual North American take on this dumpling/pasta dish, made with Limburger, aged cheddar and mozzarella, plus salty fatty bacon chunks and spicy pickled jalapeno that keep you reaching for beer. 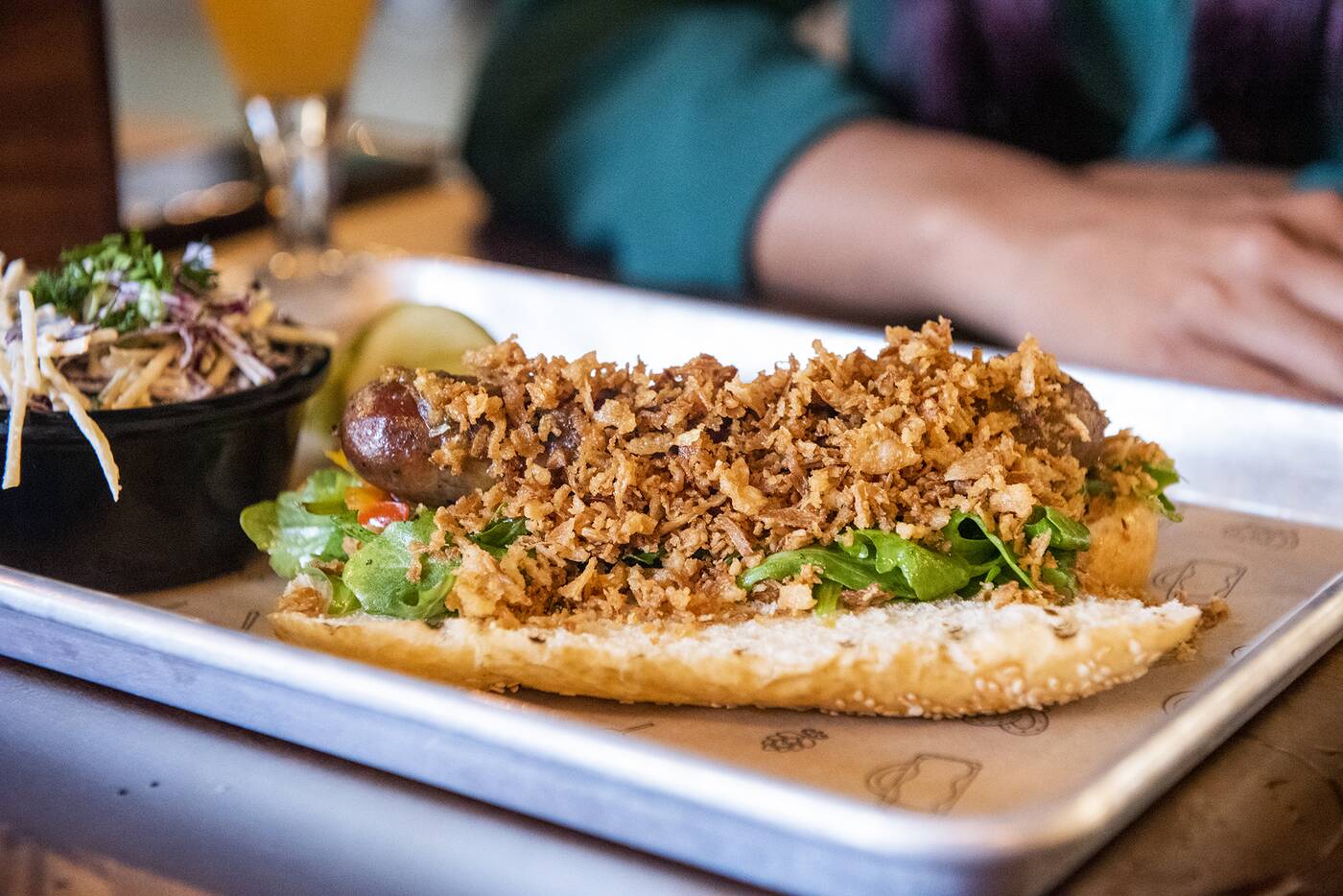 A bratwurst ($16) is one of three sausages from The Butcher shop, served on a soft brioche roll with Steam Whistle honey mustard, arugula, pepper relish, coleslaw, pickles and a ton of very dry and crispy fried shallots. 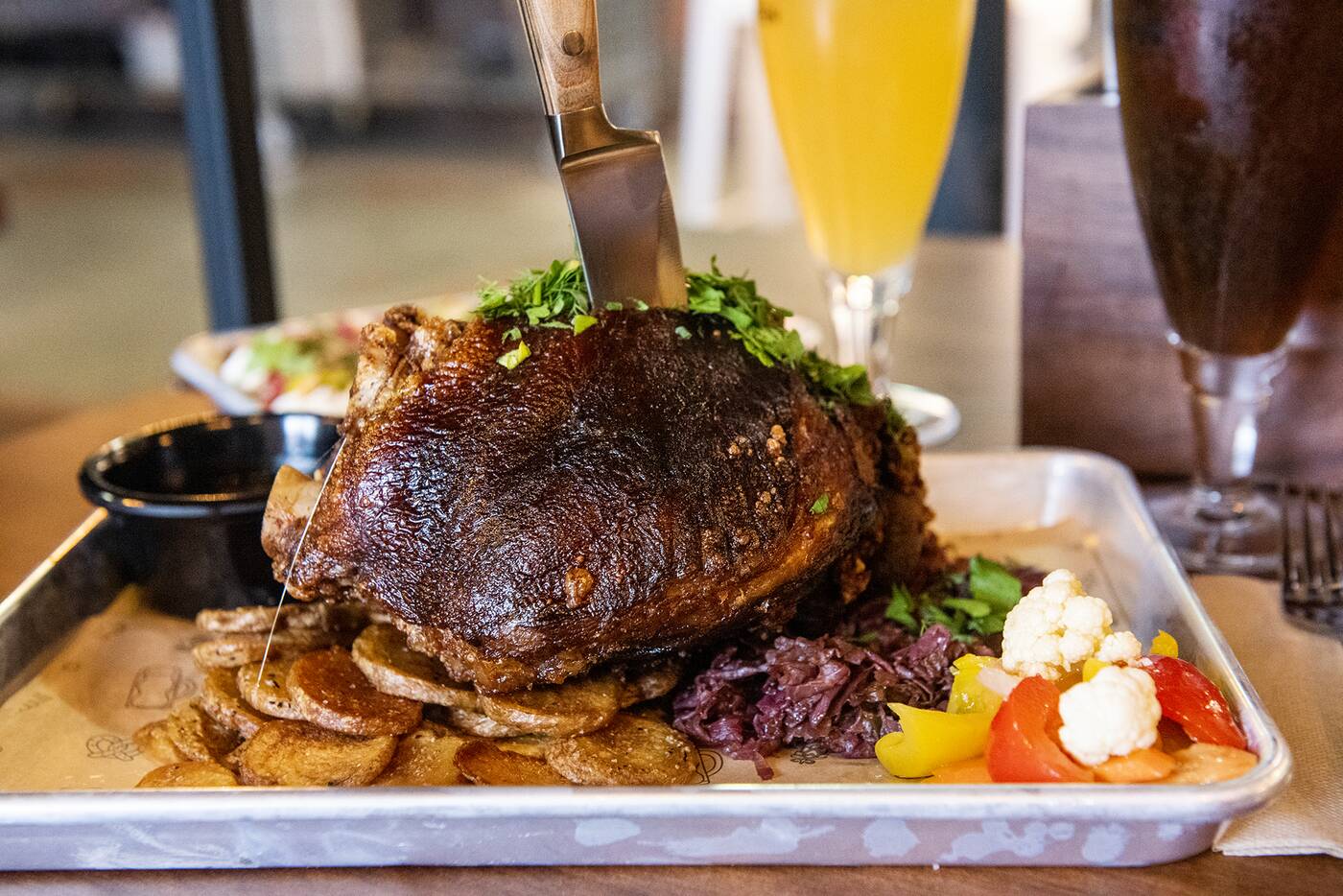 A 12-hour hock ($26) is your classic shareable pork knuckle, a giant fatty ball of meat that necessitates at least two to four people to take down. 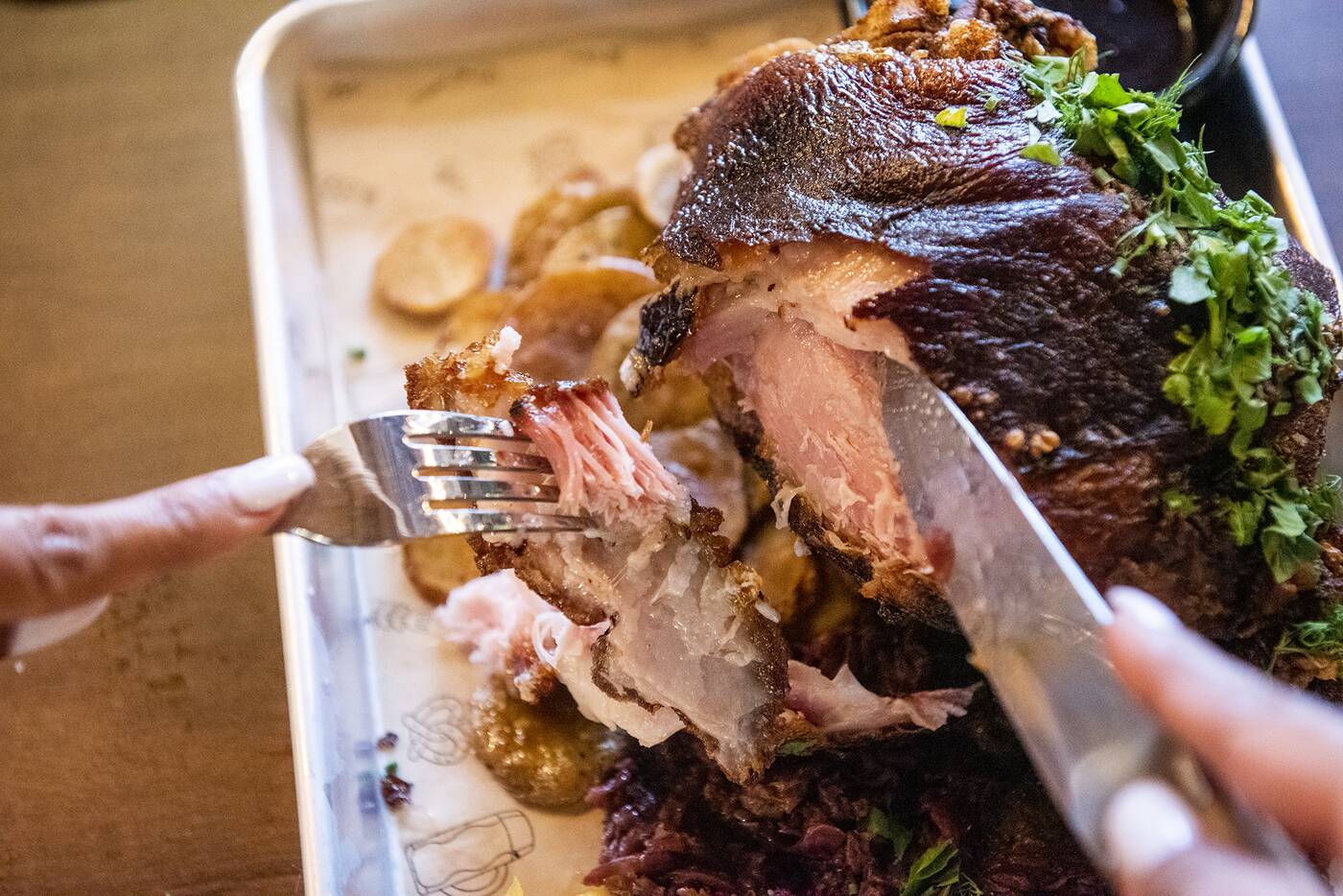 Smoked and cooked sous-vide for 12 hours, it's an exemplary version of the dish, the meat molten, dense and rich, served with a sweetly luscious Steam Whistle hock sauce, crispy German-cut potatoes, tangy cider-braised cabbage and a sort of giardiniera. 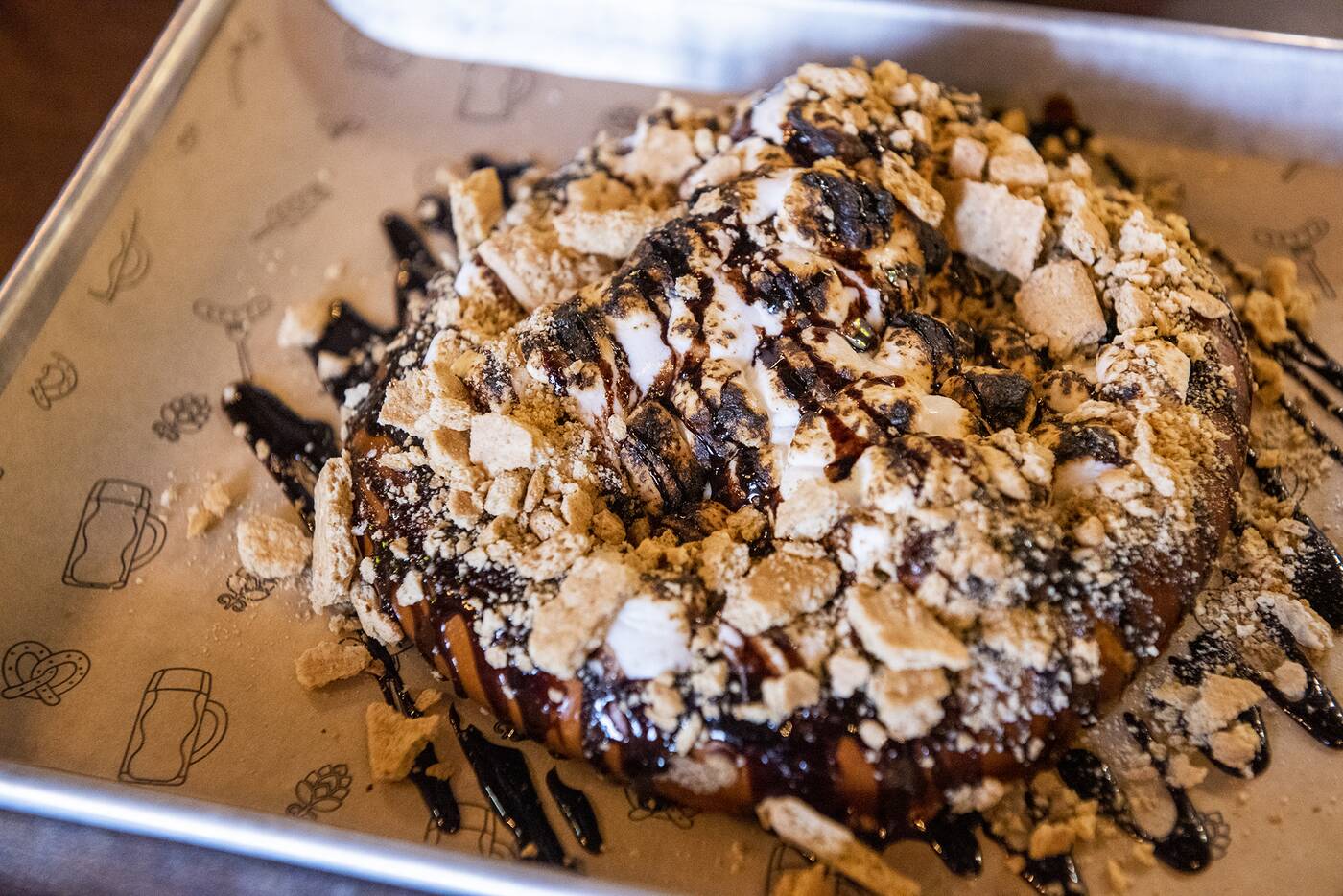 A s'mores pretzel ($10) tops a salty, bready pretzel available on its own as a savoury snack with fudge, crumbled graham crackers and a ton of gooey, sticky toasted marshmallows. 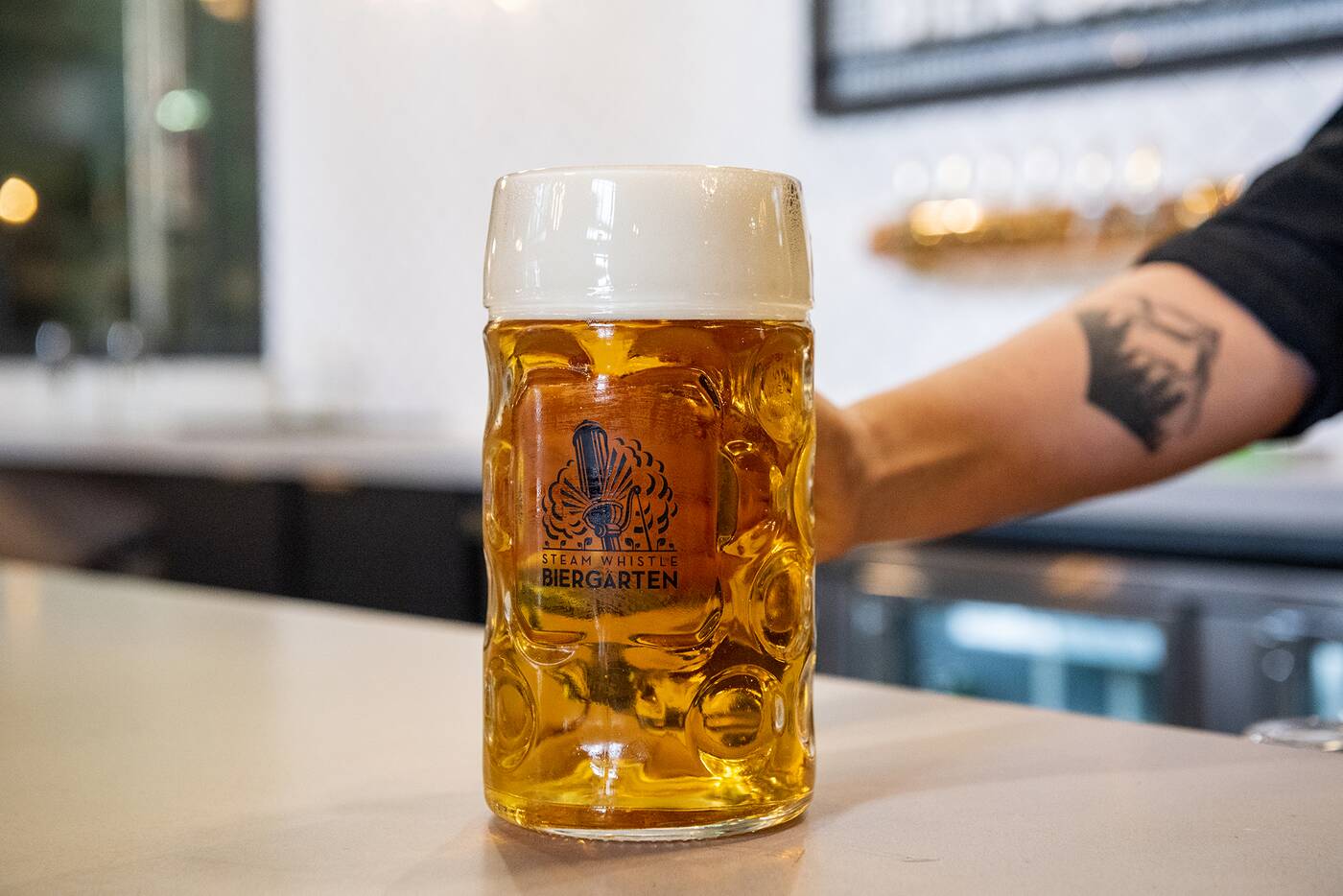 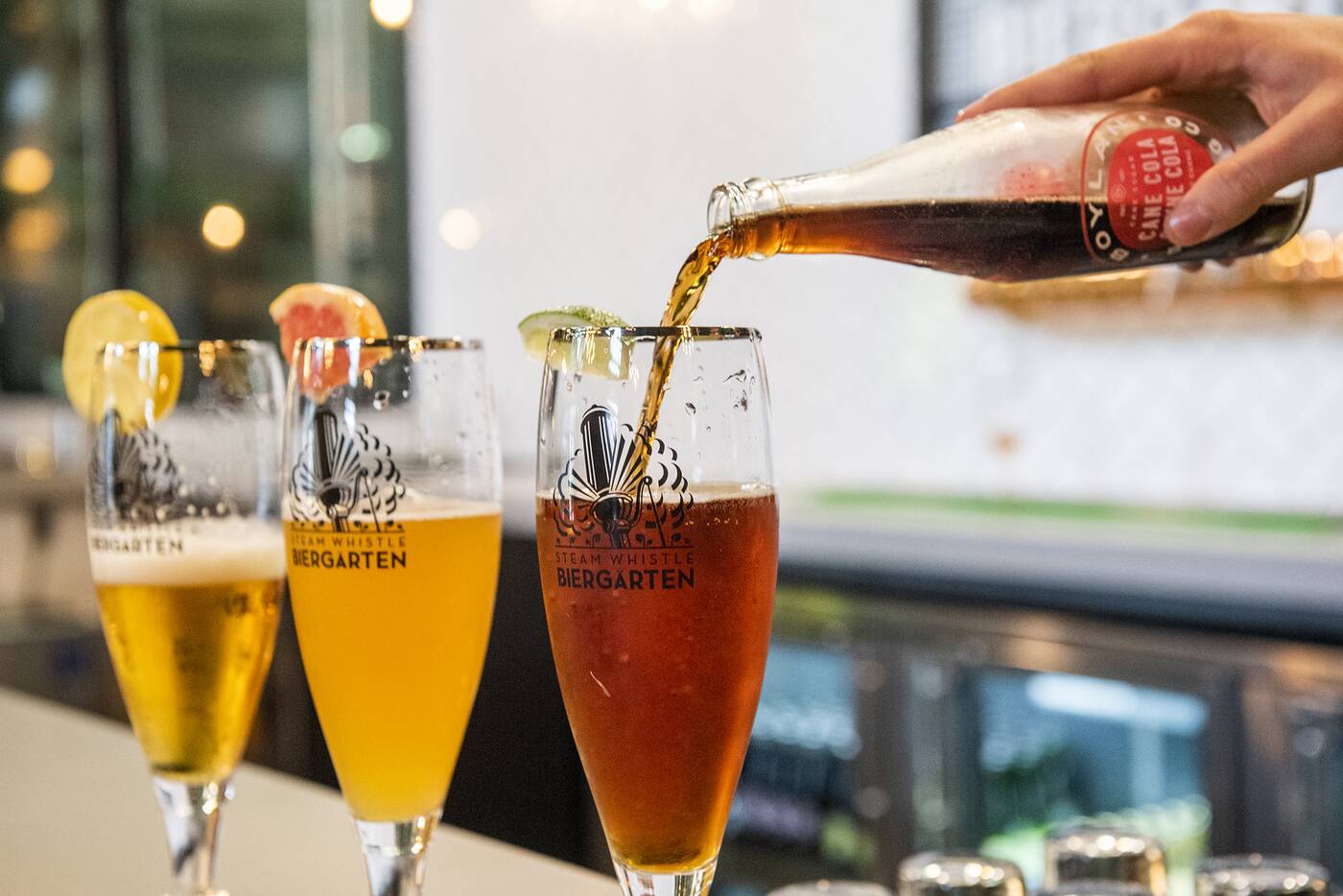 They also do beer cocktails here like shandies ($15) and radlers ($10), as well as an unusual mix of Von Bugle and Boylan cola that's apparently popular during lengthy Oktoberfest drinking sessions. 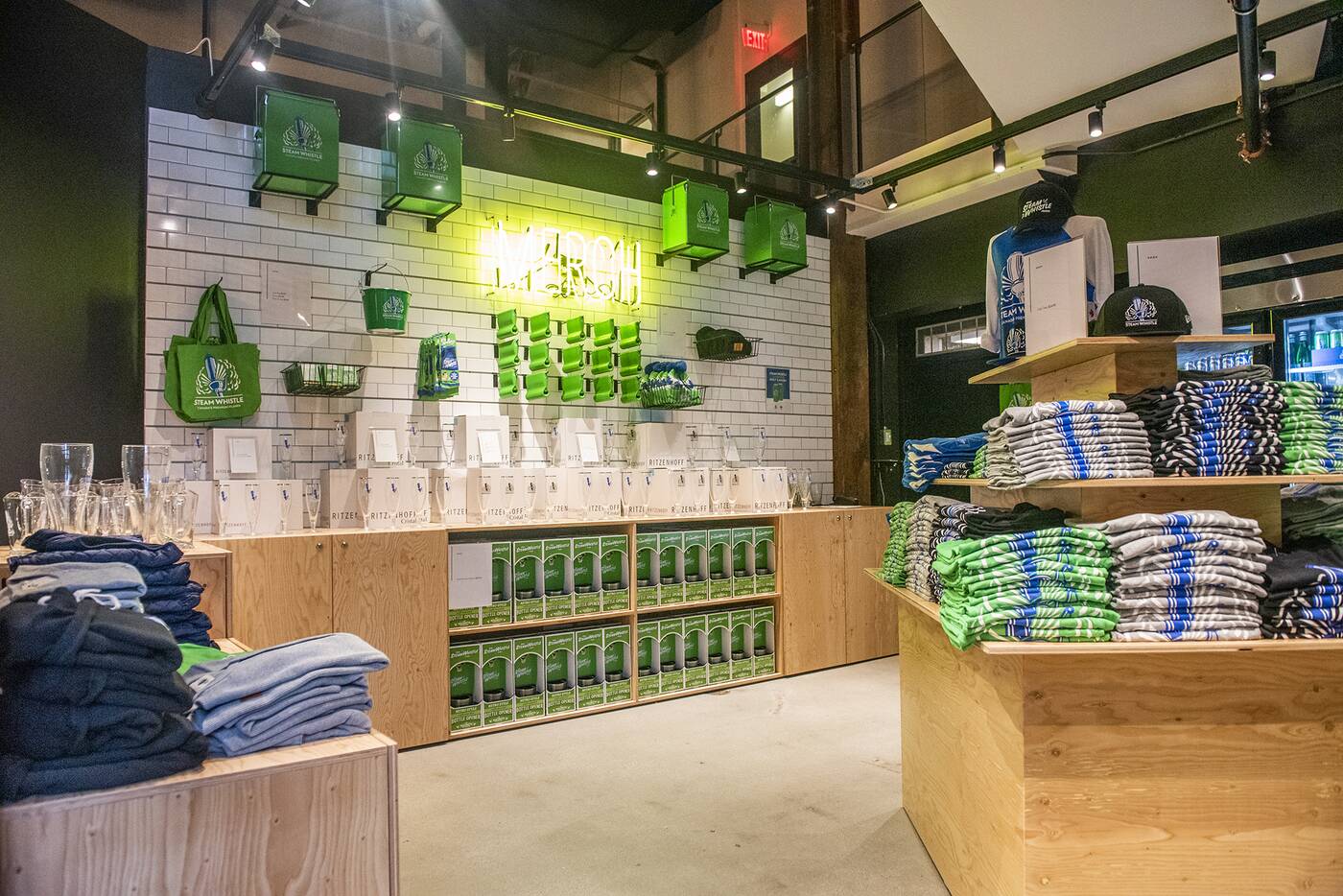 You can actually add beer to-go from the bottle shop to your bill, starting at $3.15 for a tall can of Von Bugle and going all the way up to a 12-pack of Steam Whistle Pilsner bottles for $26.95. 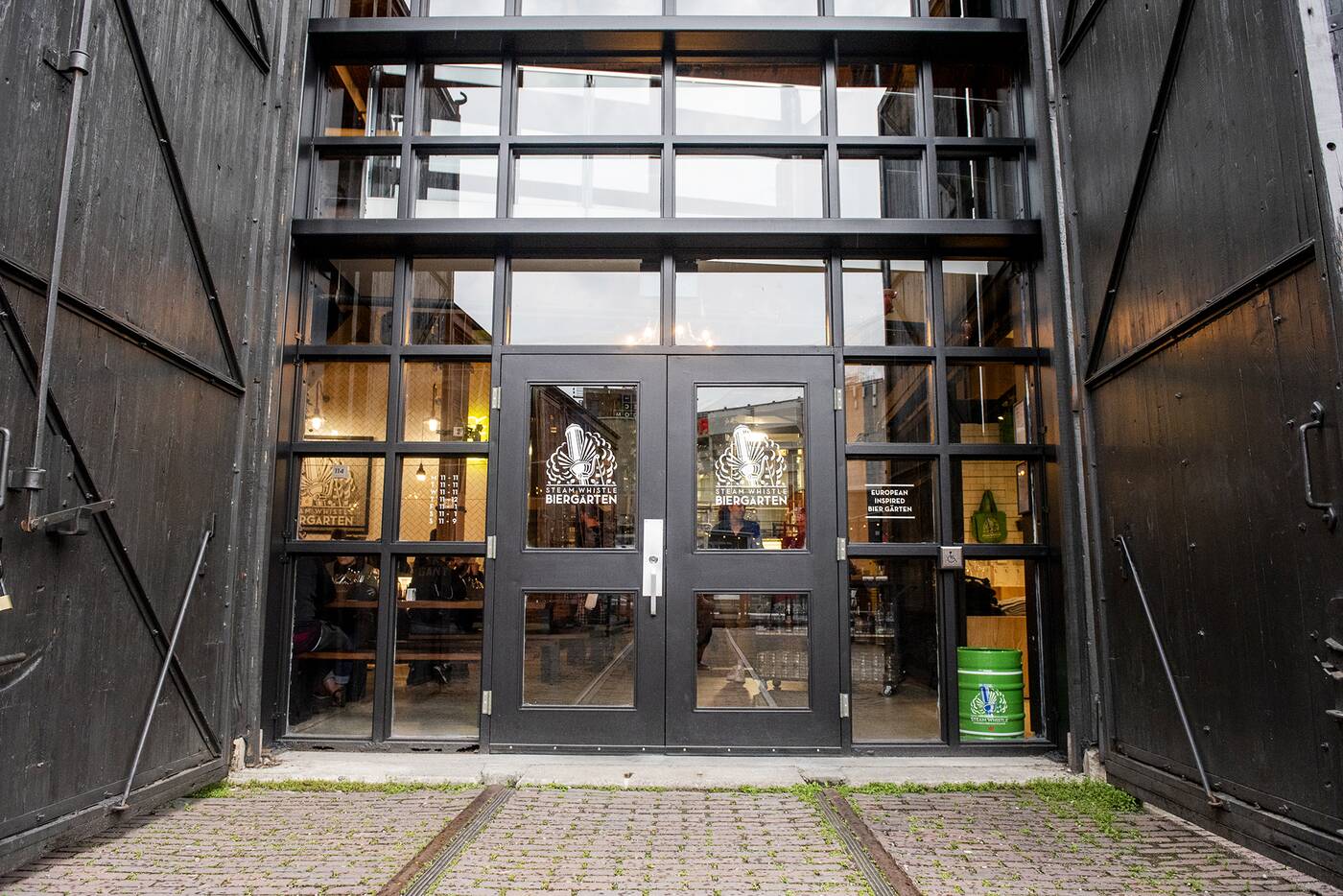