Midnight Market has hand sanitizer available for use at the bar.

Midnight Market is a late-hours snack bar and dance club with an interior that resembles outdoor night markets found all over Asia.

Walking inside is a transformative experience, as it truly feels like you're stepping into another season on a different continent. 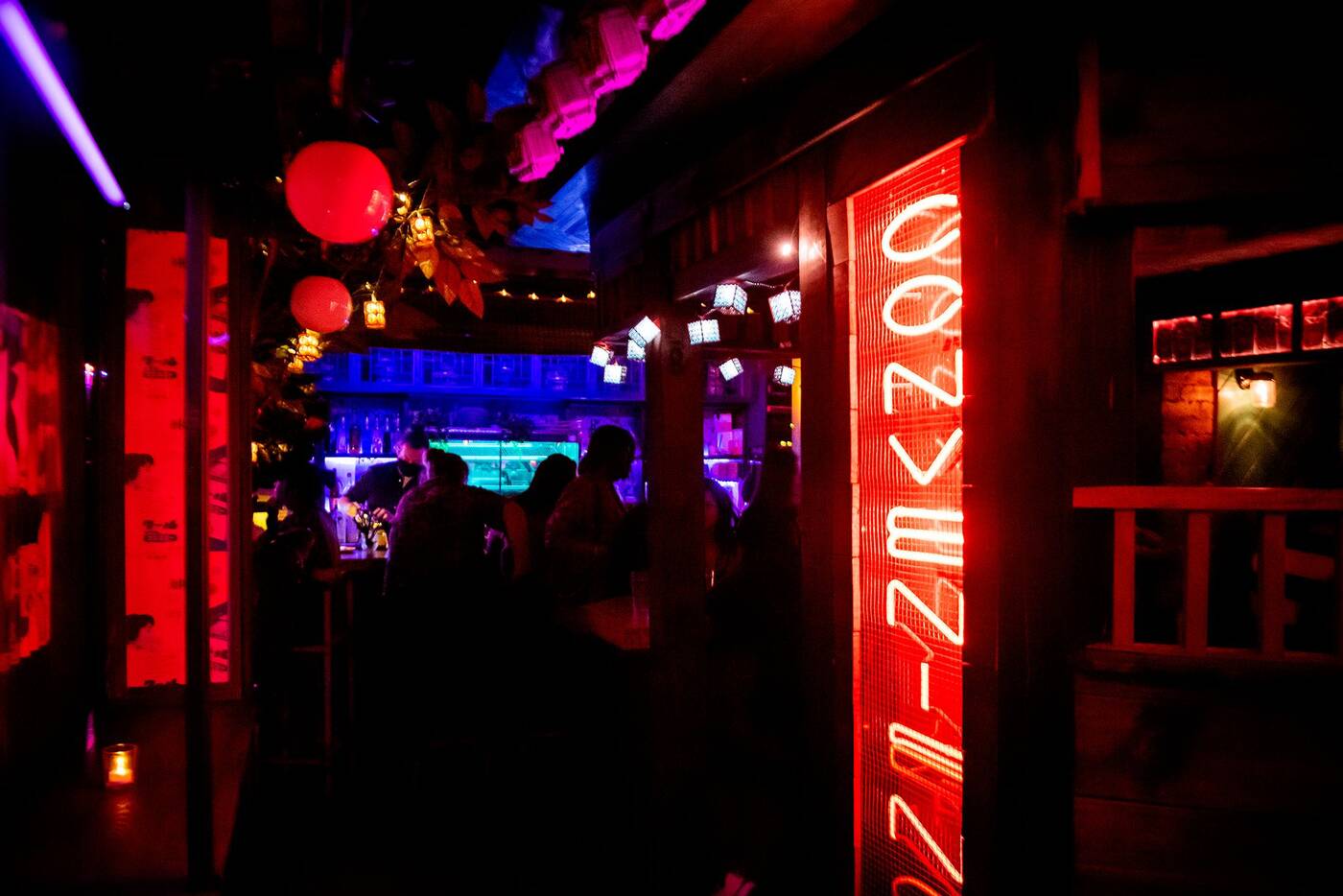 Christine Pham says the concept for Midnight Market is meant to emulate the feeling of visiting a drinking alleyway in Japan. 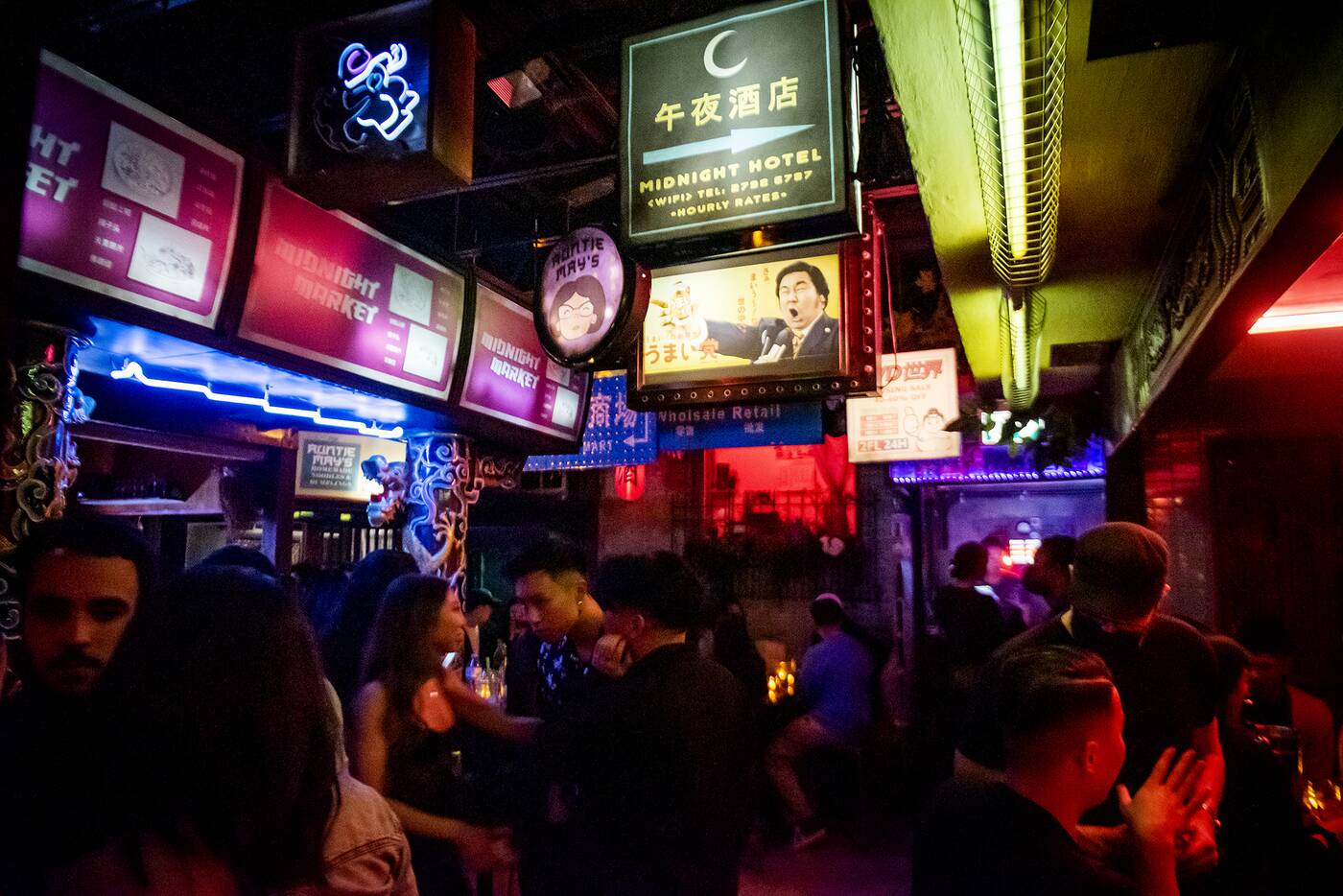 These are rows of late-night, shanty-style bars, eateries and dancing destinations tucked away into narrow side streets all over East Asia. 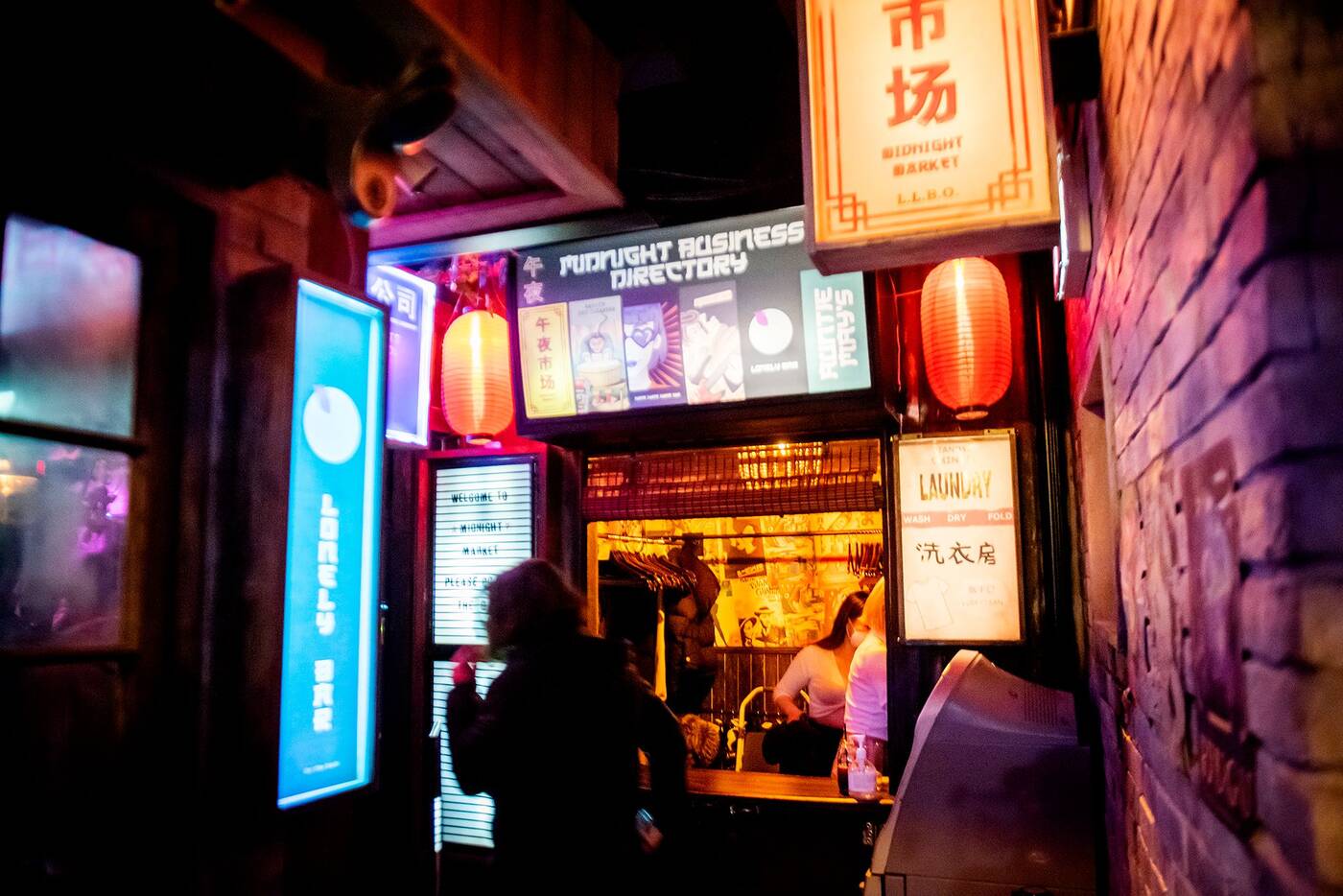 Pham owns Midnight Market along with her sister Elissa and brother Andrew, the siblings are also behind Big Trouble Bar in Chinatown. 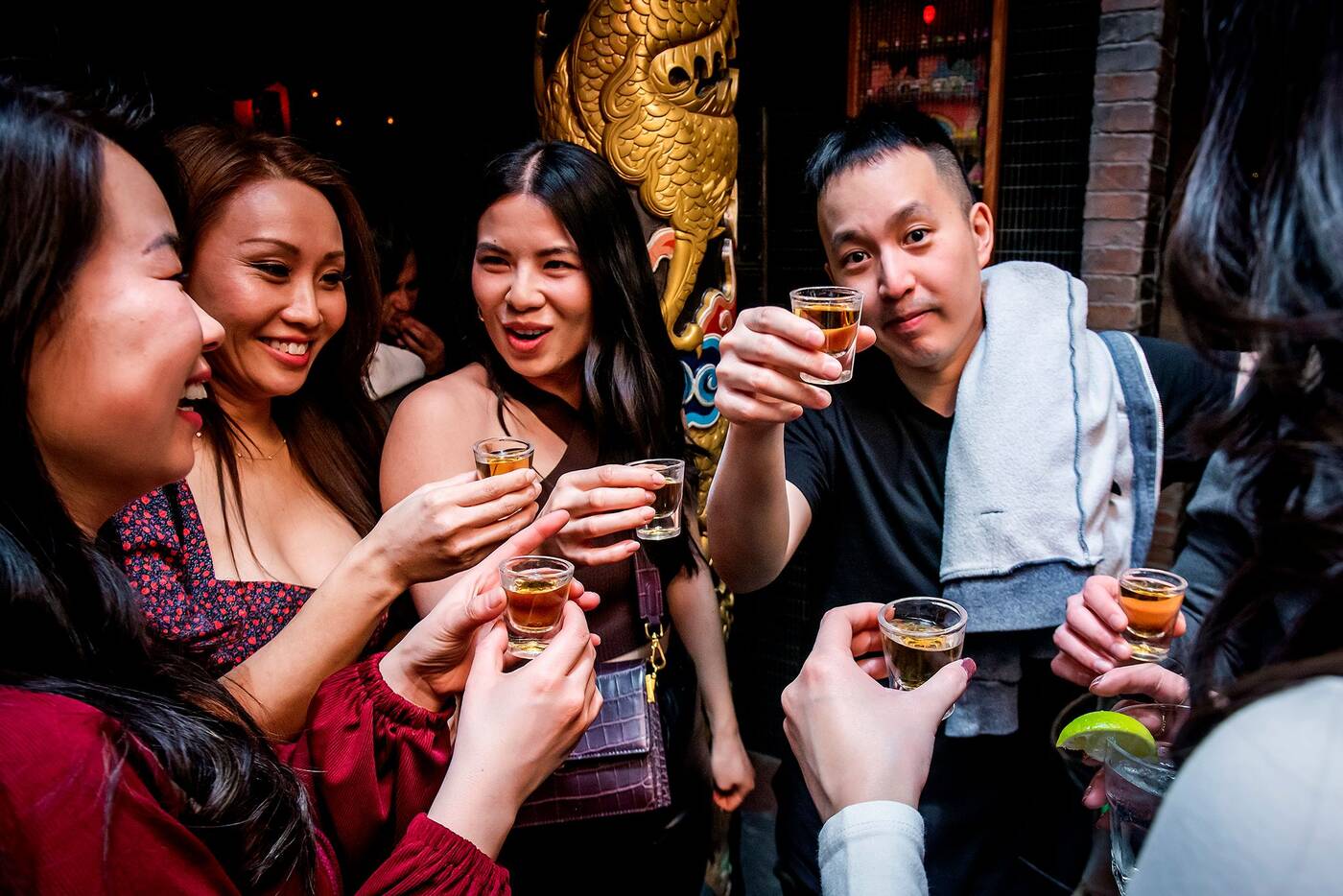 Small sections of seating surround the main bar, where people can eat the snack-type meals Midnight Market offers along with their array of street style cocktails they have on the menu. 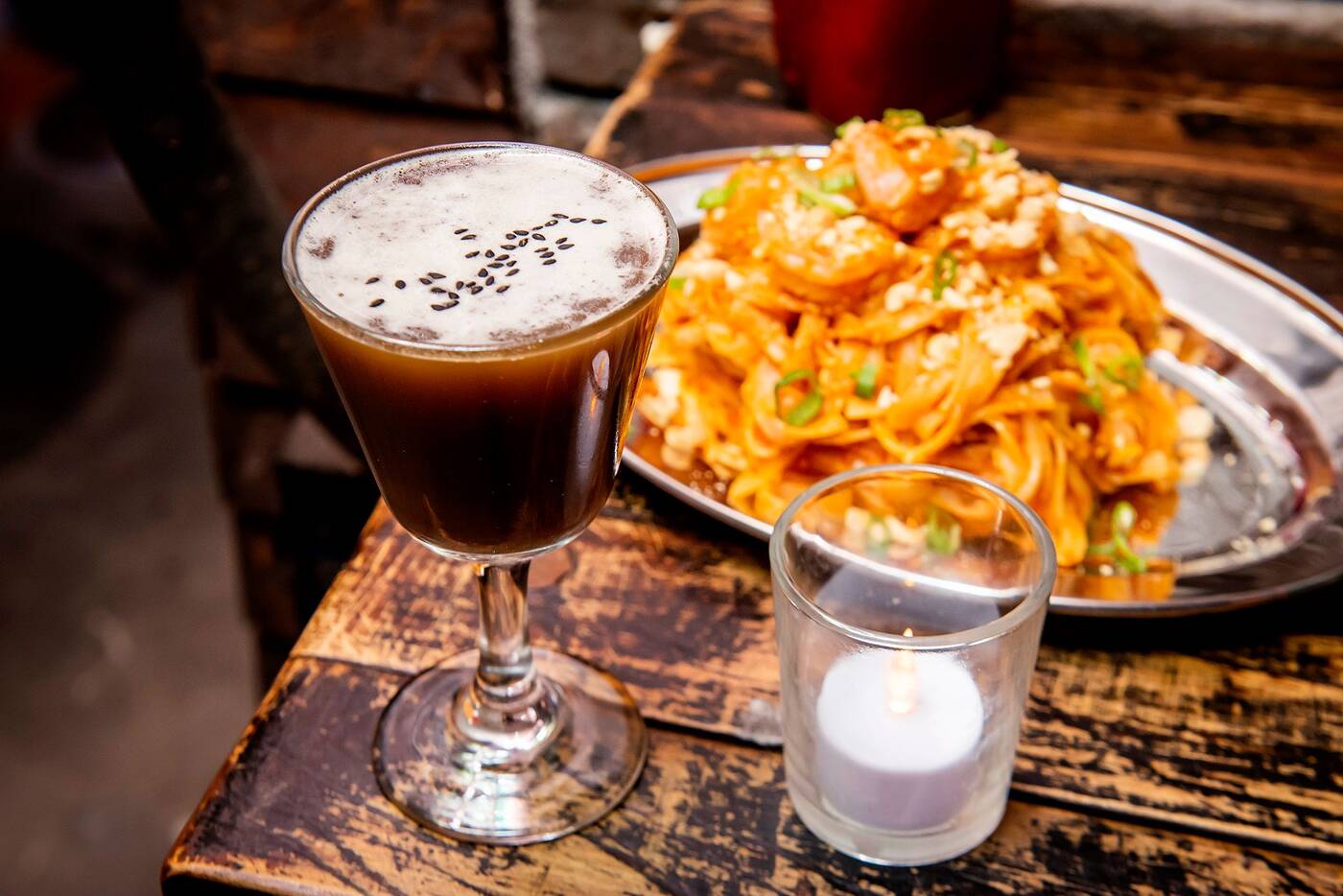 The Black Lotus ($15.00) is meant to be an alcoholic version of a black sesame dessert. Sailor Jerry's Spiced Rum is combined with Kahlua, black sesame honey, and black walnut bitters for a sweet, yet strong finish for the rum lovers out there. 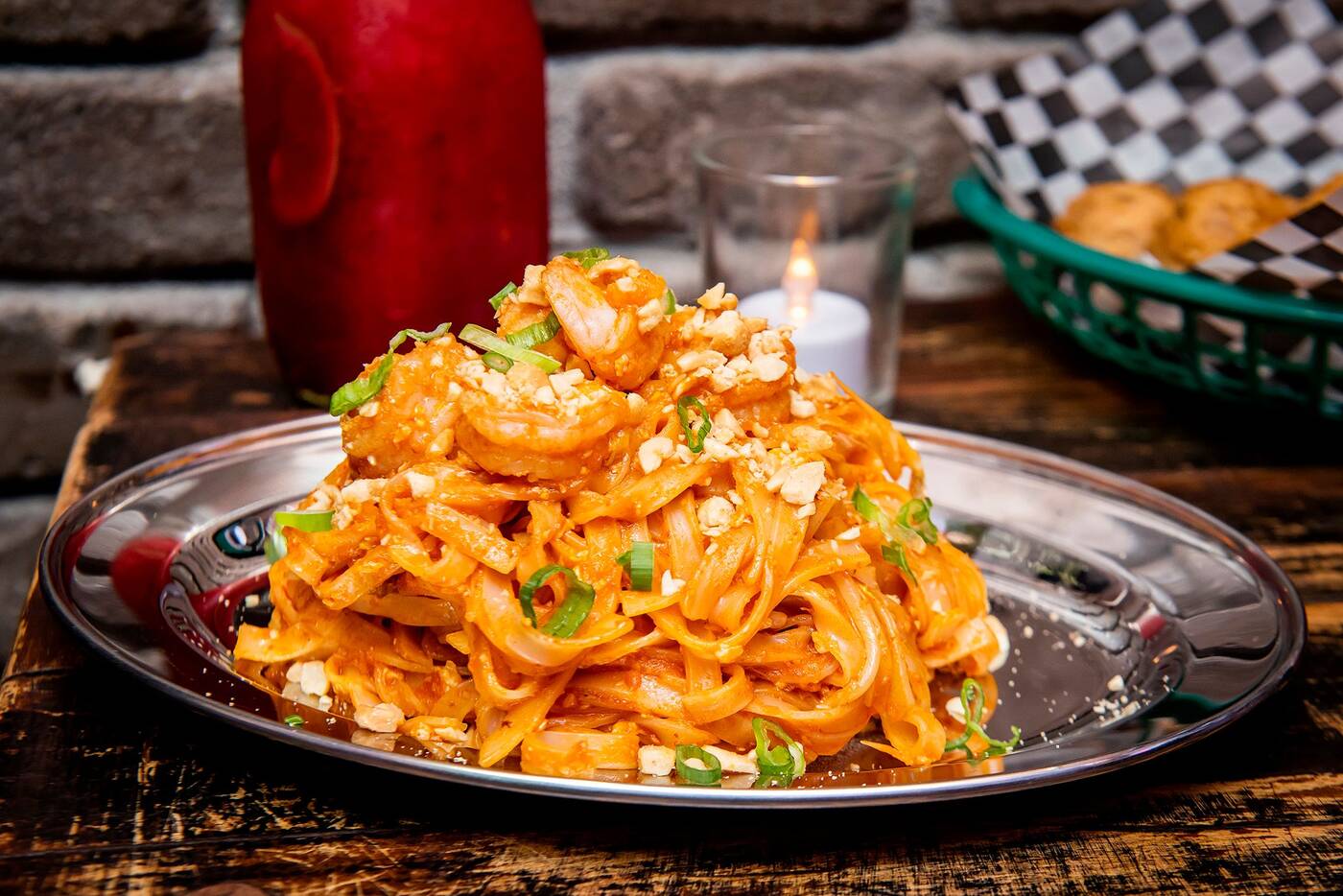 Pair it with the Shrimp Pad Thai ($15.00) and you're stomach will be set for any extra drinks you have during the night. Made with classic rice noodles, bean sprouts, egg, and lovingly sprinkled with peanuts and scallions. 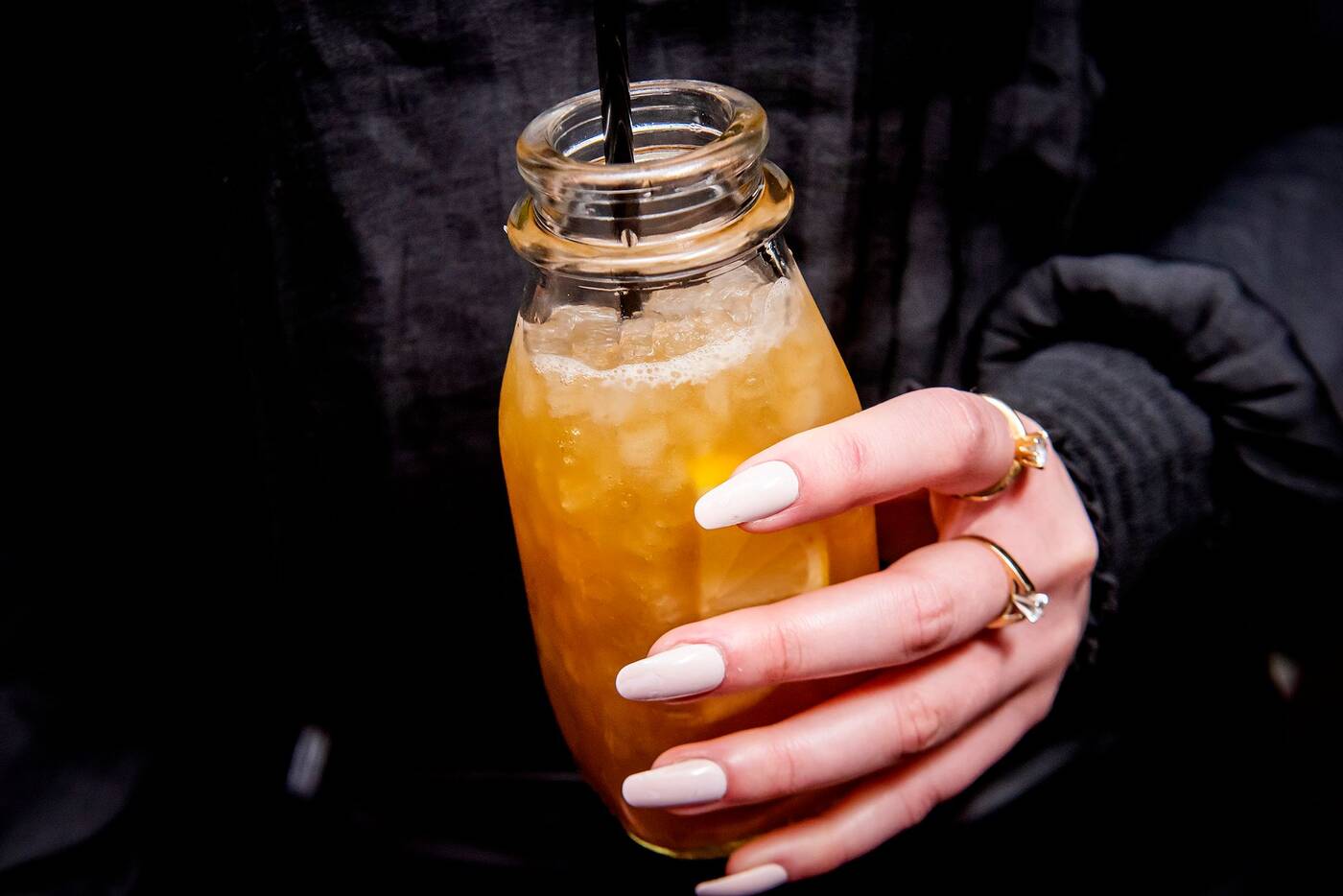 Check out the variations of hi-balls ($13.00) that Midnight Market has. This one is called the Pineapple Lo-Tea, that has a base of Tito's Vodka and pineapple juice. Hojicha simple syrup is included, it's derived from Japanese green tea, adding an almost sour-like taste to the cocktail.

The final alcoholic component is Yokaichi Mugi Shochu, a type of liquor made with barley that tastes similar to Japanese Sake. 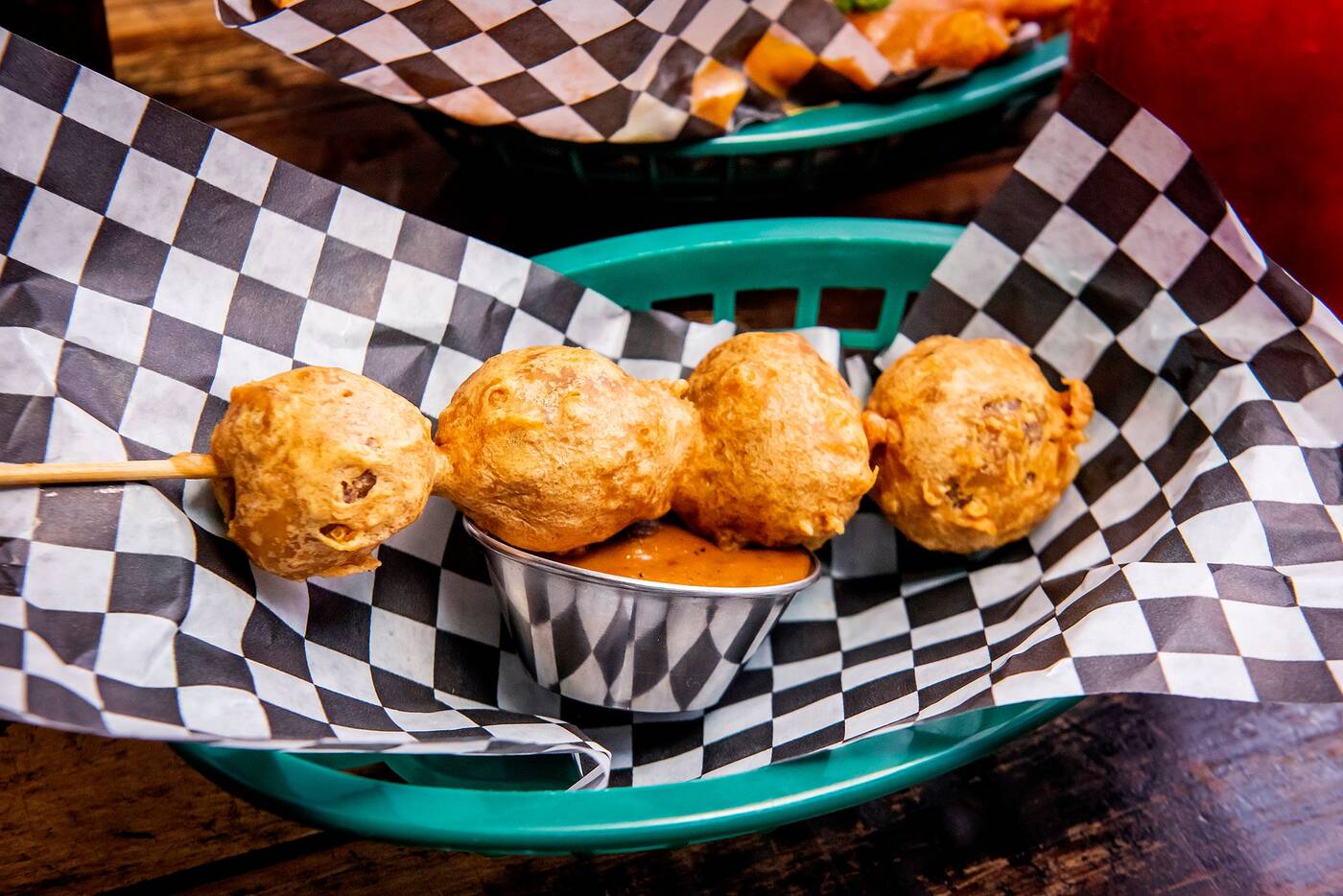 The Peanut Beef Ball Skewer ($5.00) sounds exactly like it tastes, simple, cheap, and an easy eat for bar food, beef balls are deep fried in a batter and served with peanut sauce to dip into. 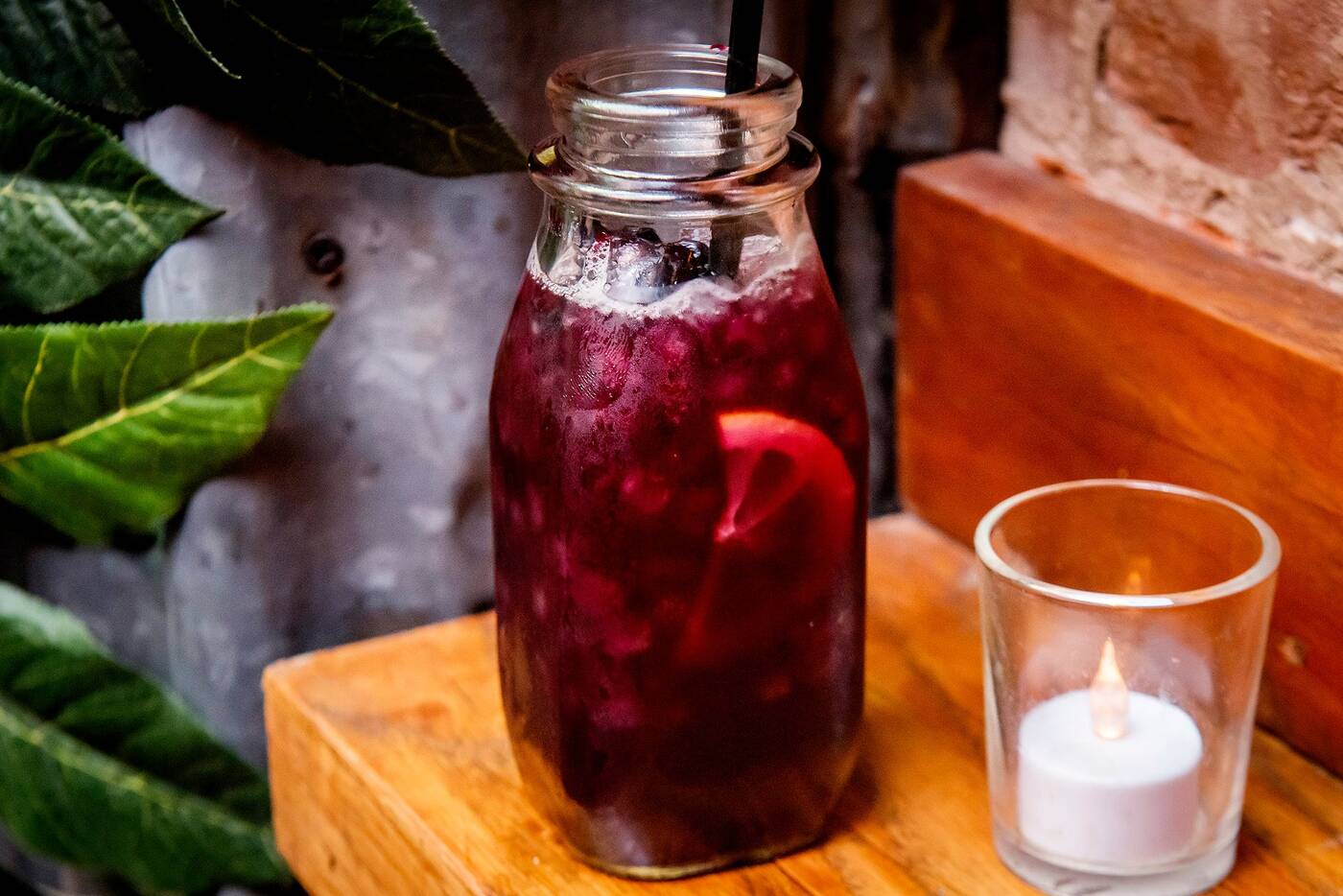 Another flavour option for a hi-ball is the blueberry hi-tea ($13.00). Instead of vodka, you'll taste gin for the base in this drink, specifically from the Tanqueray brand.

Blueberry juice gives the cup its berry-coloured hues, along with Hojicha simple syrup and Yokaichi Mugi Shochu to finish. 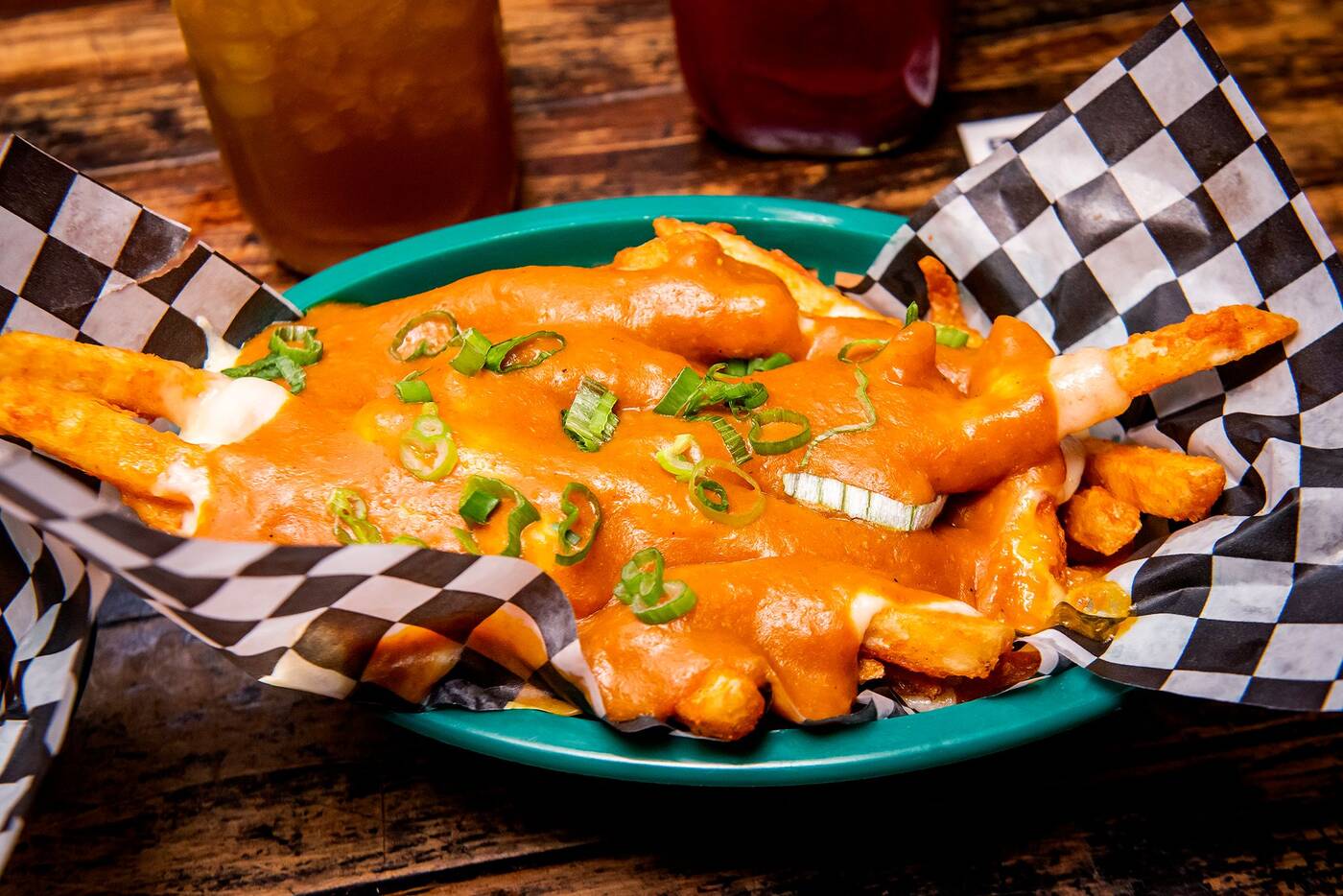 The Curry Poutine ($8.00) is a heartier option on Midnight Market's snack menu. Curry sauce smothers a big pile of spicy fries, that then get melted in with cheese curds and fresh scallions as a garnish for extra flavour. 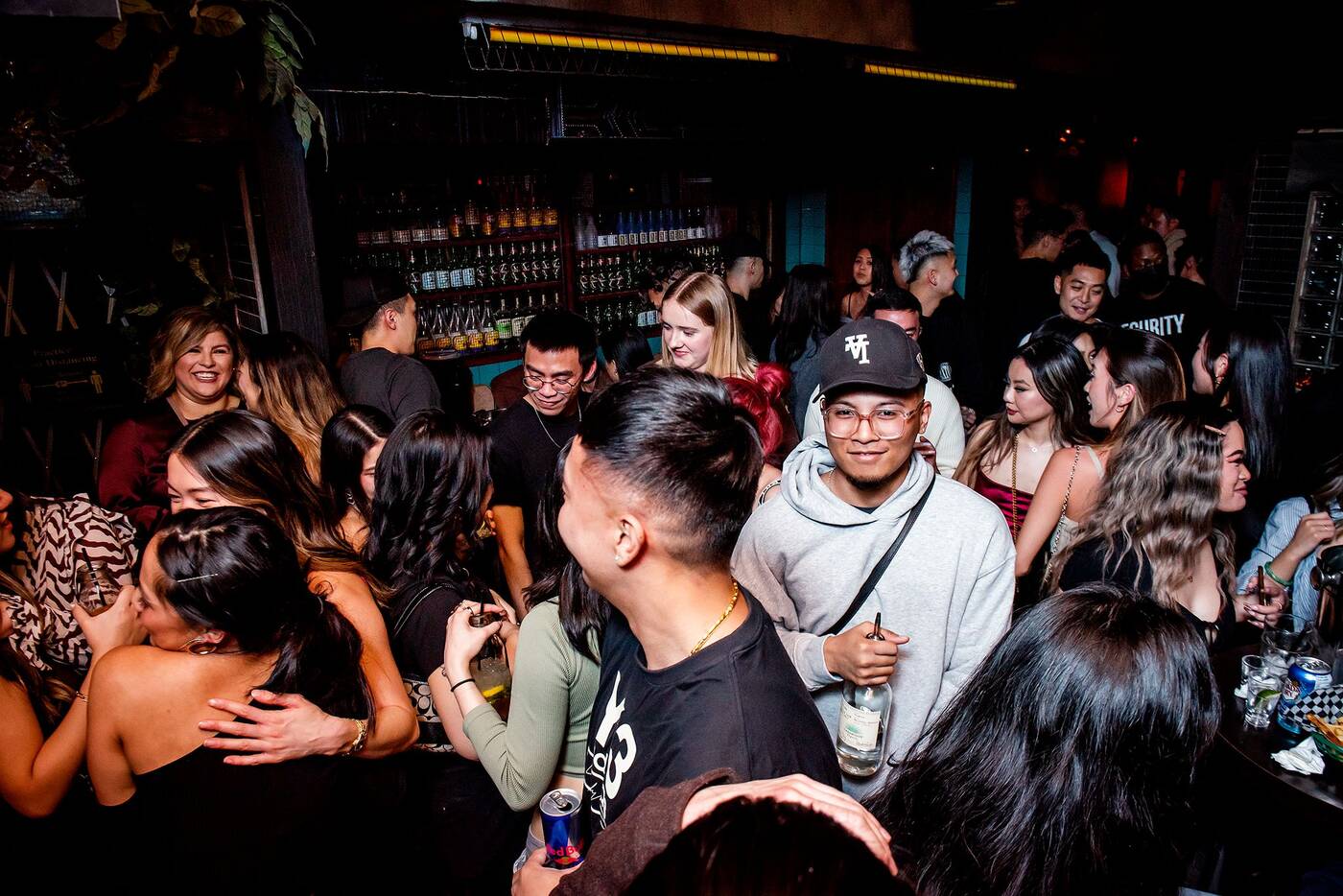 The later it gets, the more Midnight Market turns into a giant party - groups dancing, mingling and letting loose in the best way possible to whatever DJ is hosting that night, usually remixes of 90's/early 2000's hip-hop and hits from TikTok. 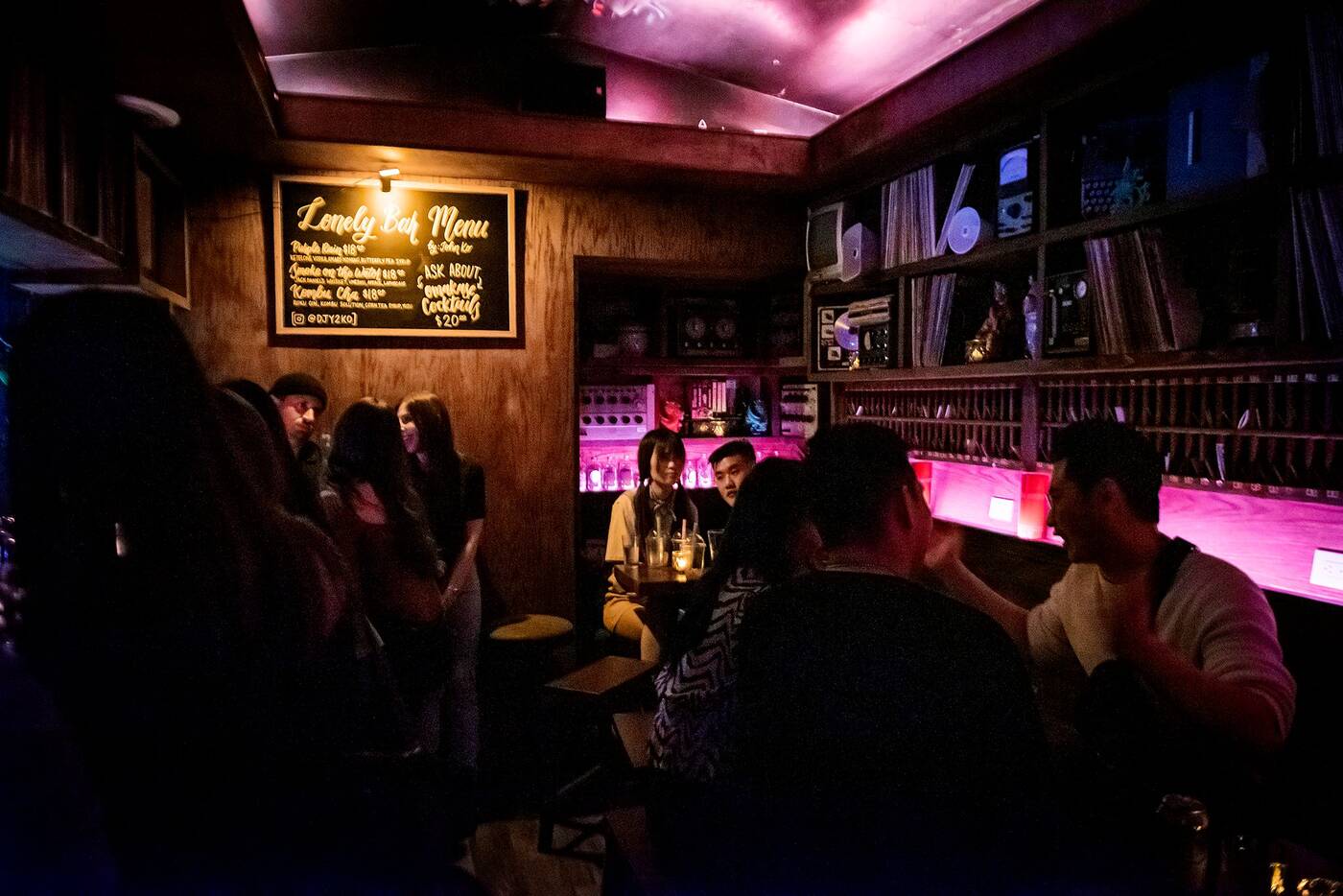 It doesn't end there, head to the back near the DJ booth, where you'll discover a tiny speakeasy called the Lonely Bar.

This space is less of a party, playing laid back tracks, and offers a space to properly converse with people, without shouting over the tunes. 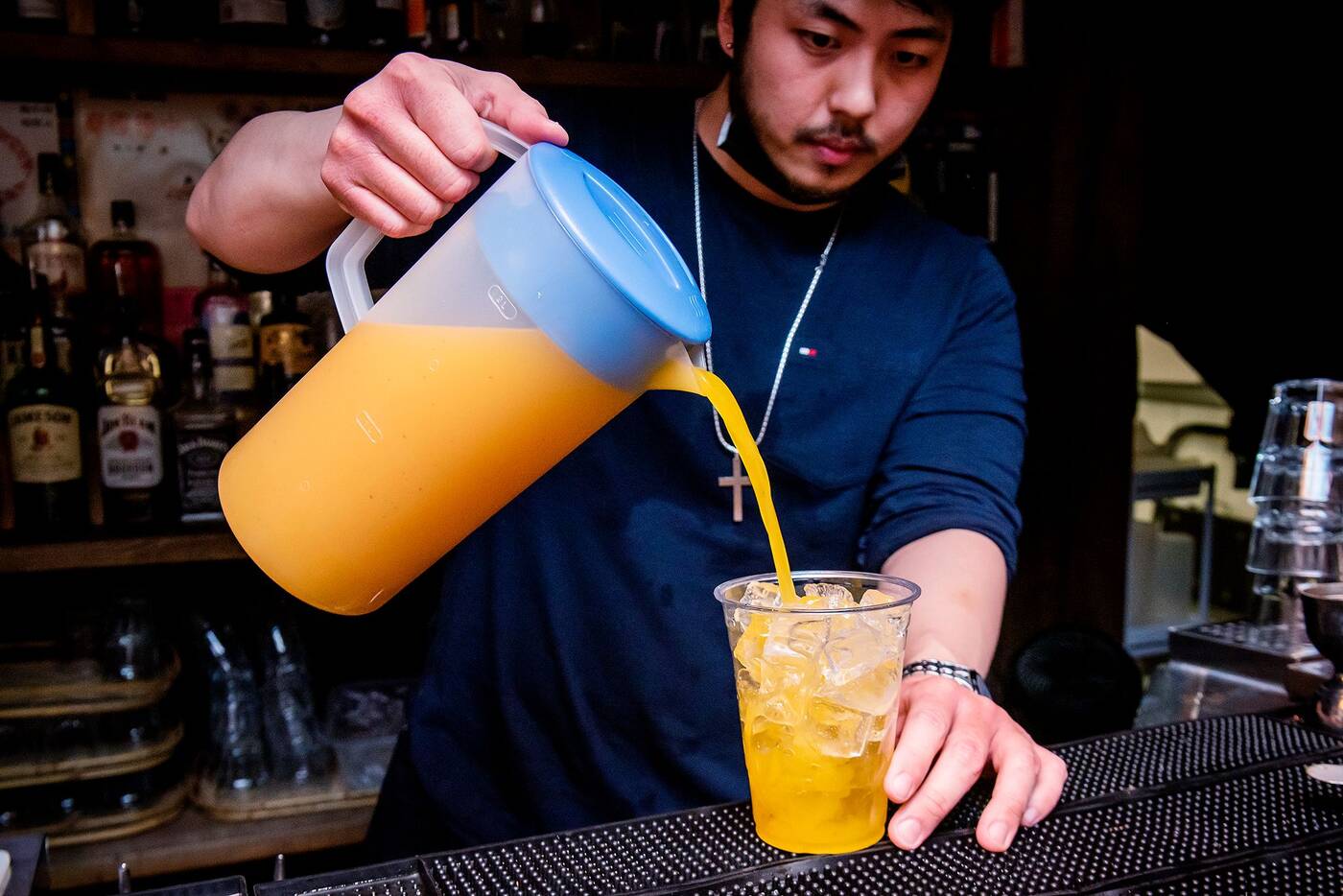 They also have a different menu with mixed drinks that come in cups that resemble bubble tea, called Omakase cocktails ($20.00). 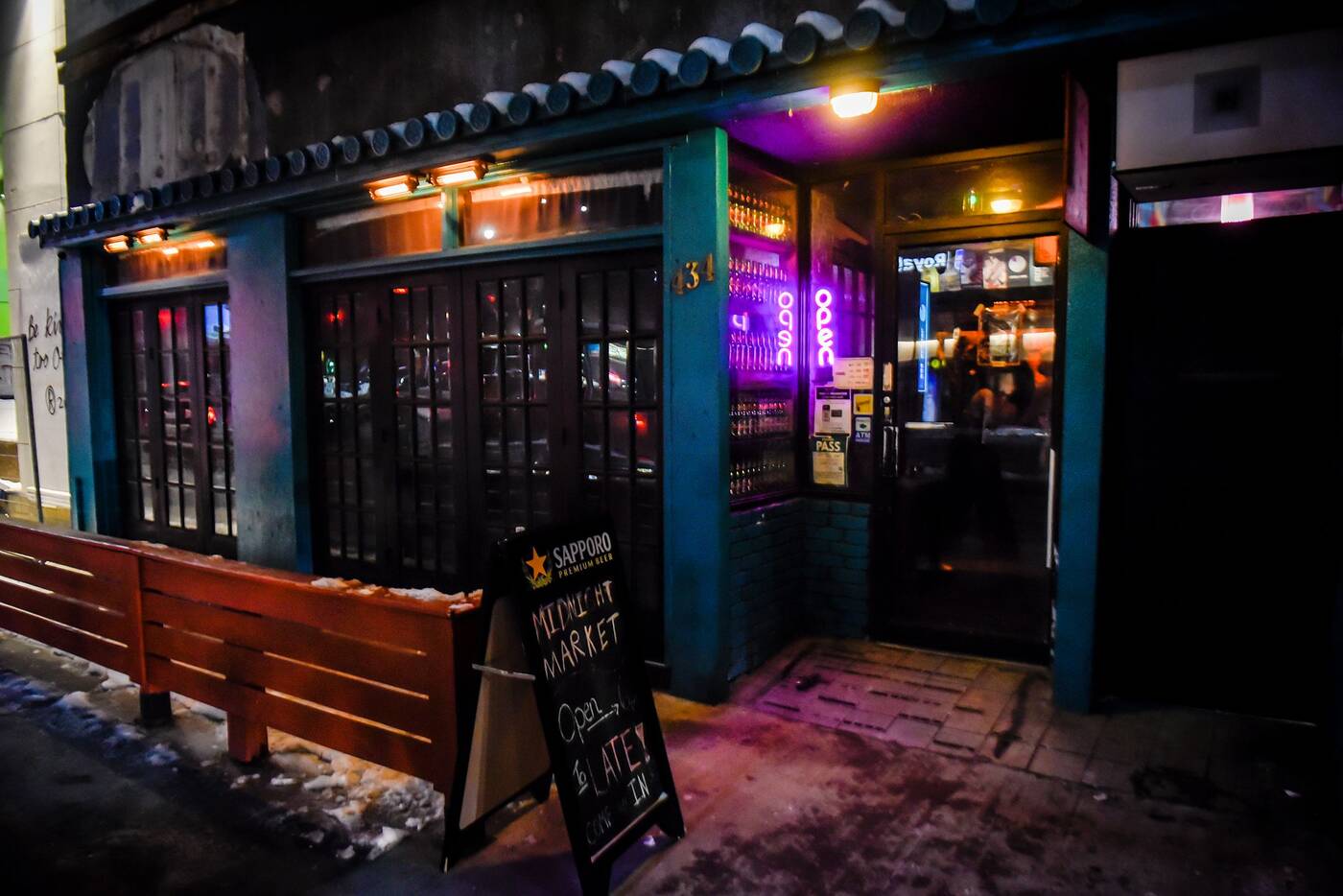 The building Midnight Market is now home to was once Nirvana, the bar and restaurant that closed after about a 15 year run in the city.