The bar is dimly-lit and humble on the inside, straying away from any sight of colonial praise or ode to British royalty like you're used to seeing at other standard pubs around the city. 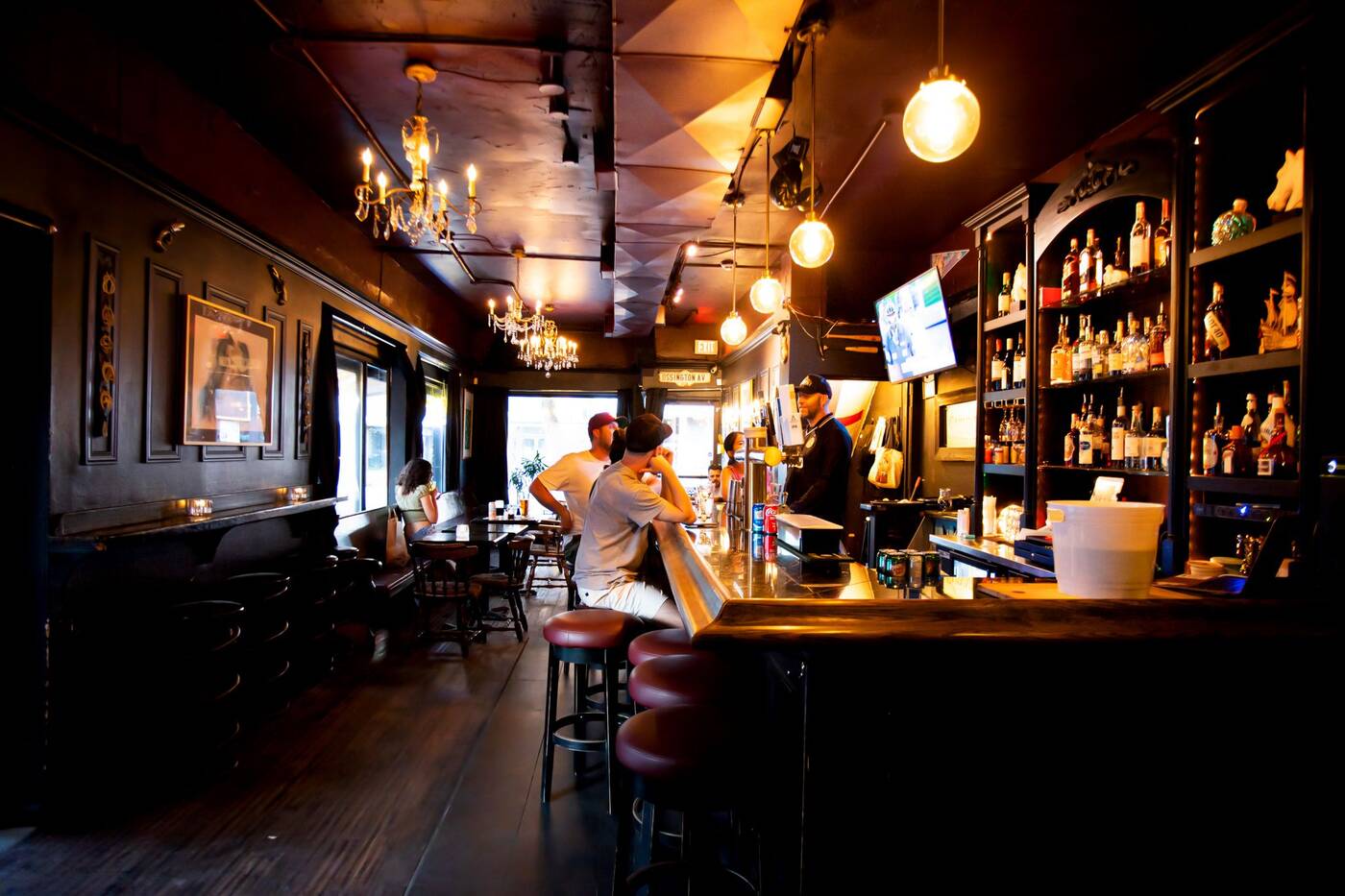 Lawrence Bill has owned this spot on the corner of Ossington and Rolyat Street for the last six years. 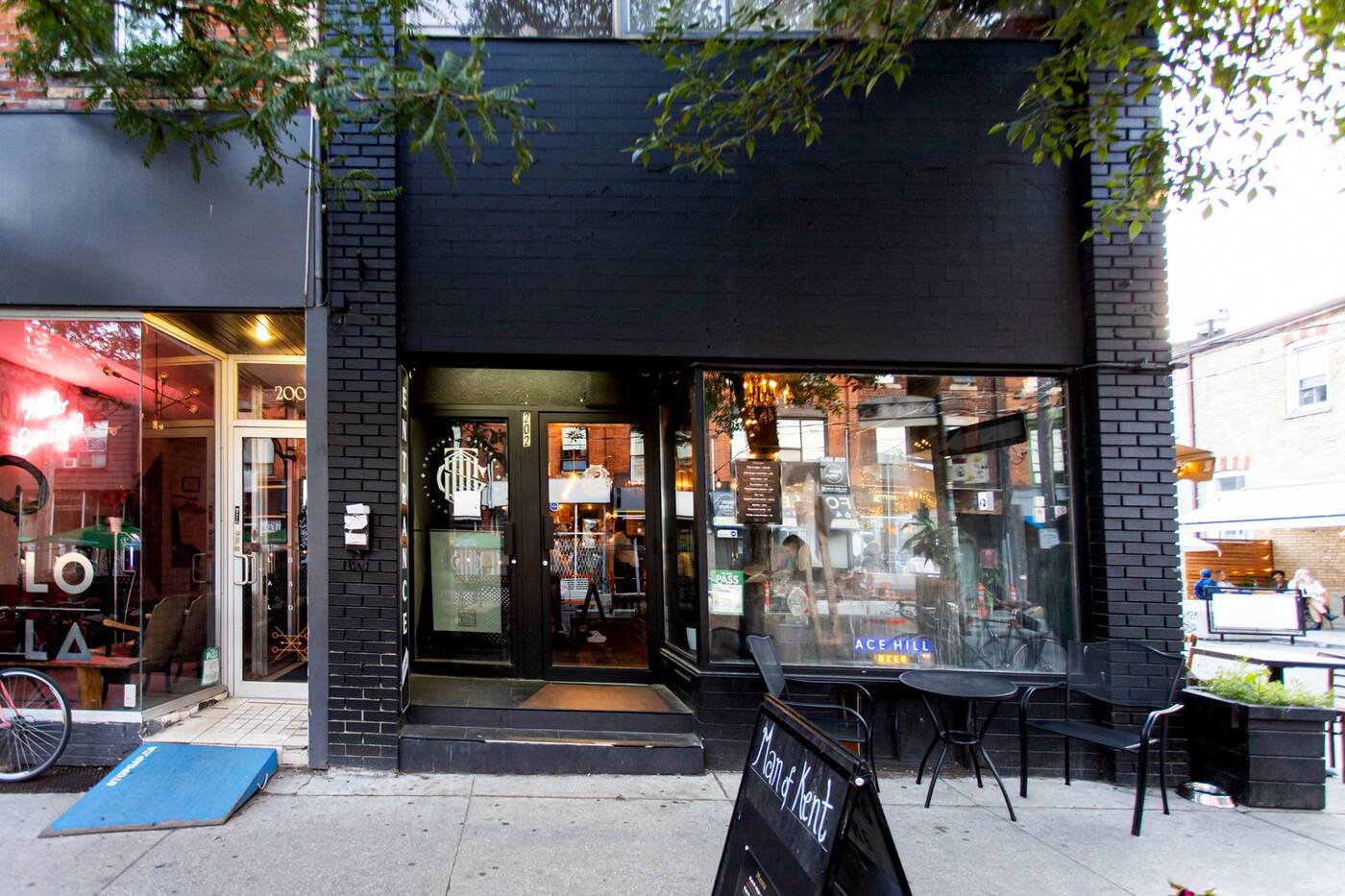 Bill says he's watched the strip grow into an area for elevated dining and drinks from its previous life as a hub for Toronto nightlife. 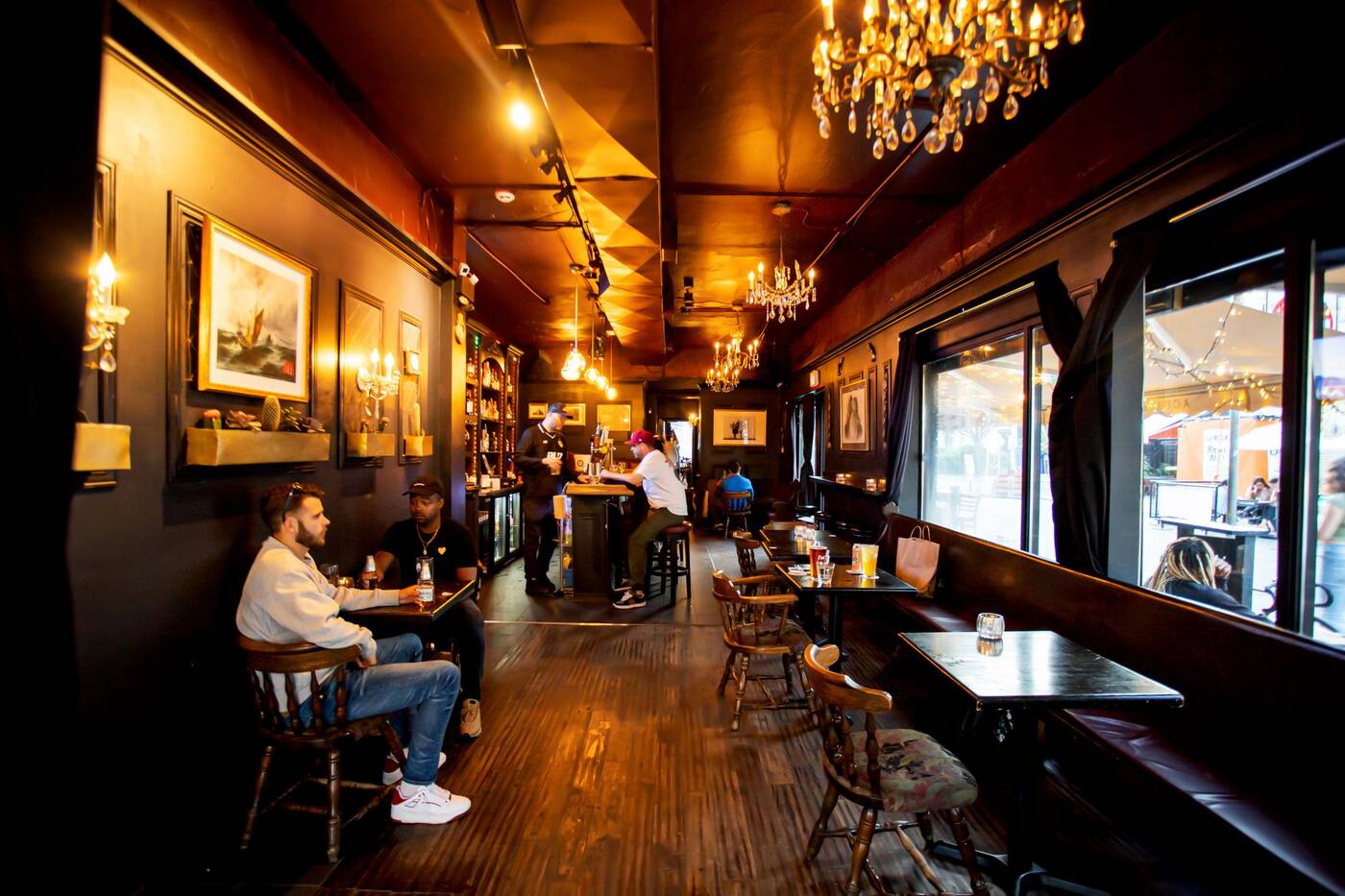 Man of Kent is named after the county in the Southeast London where Bill comes from. People who live there proudly identify themselves as a Kentish Man or a Man of Kent depending on whether you're from the east or west side of the region. 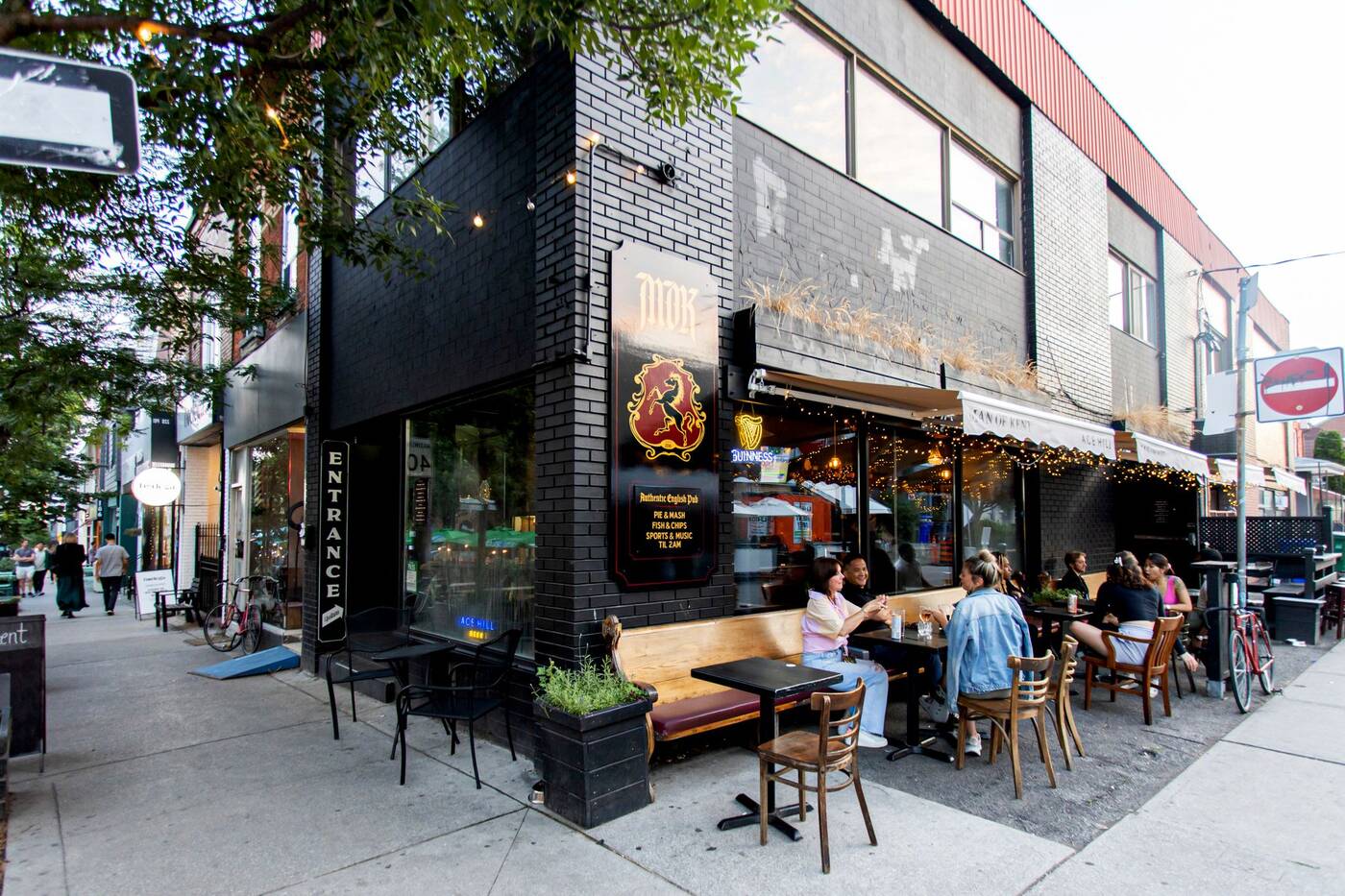 This bar in Toronto is a spot for everyone, mainly frequented by a lot of creatives, like musicians, tattoo artists or those who work in movies or television. 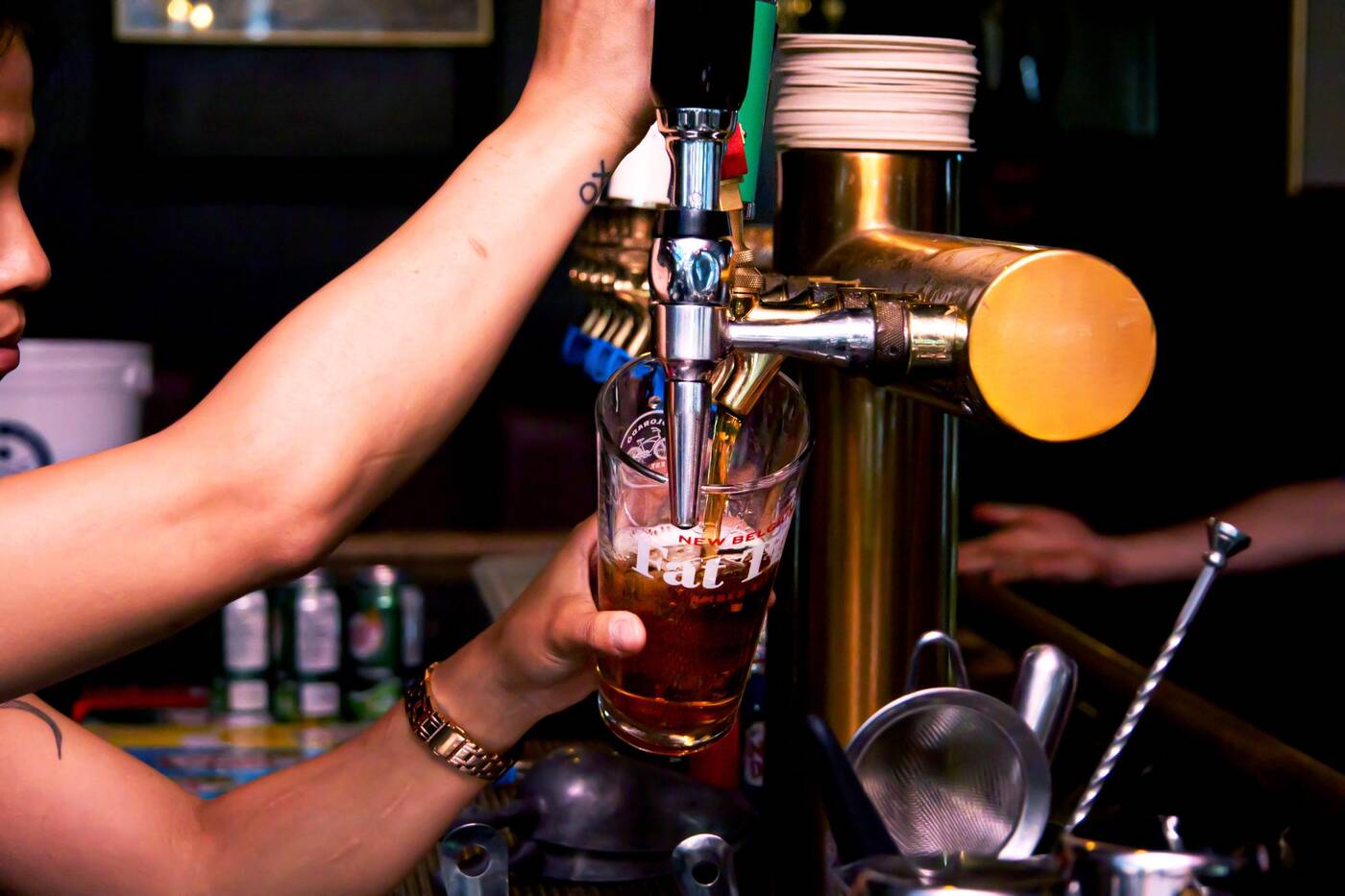 Man of Kent keeps it pretty simple with their drink menu, it's kind of like a "you get what you want" type place. 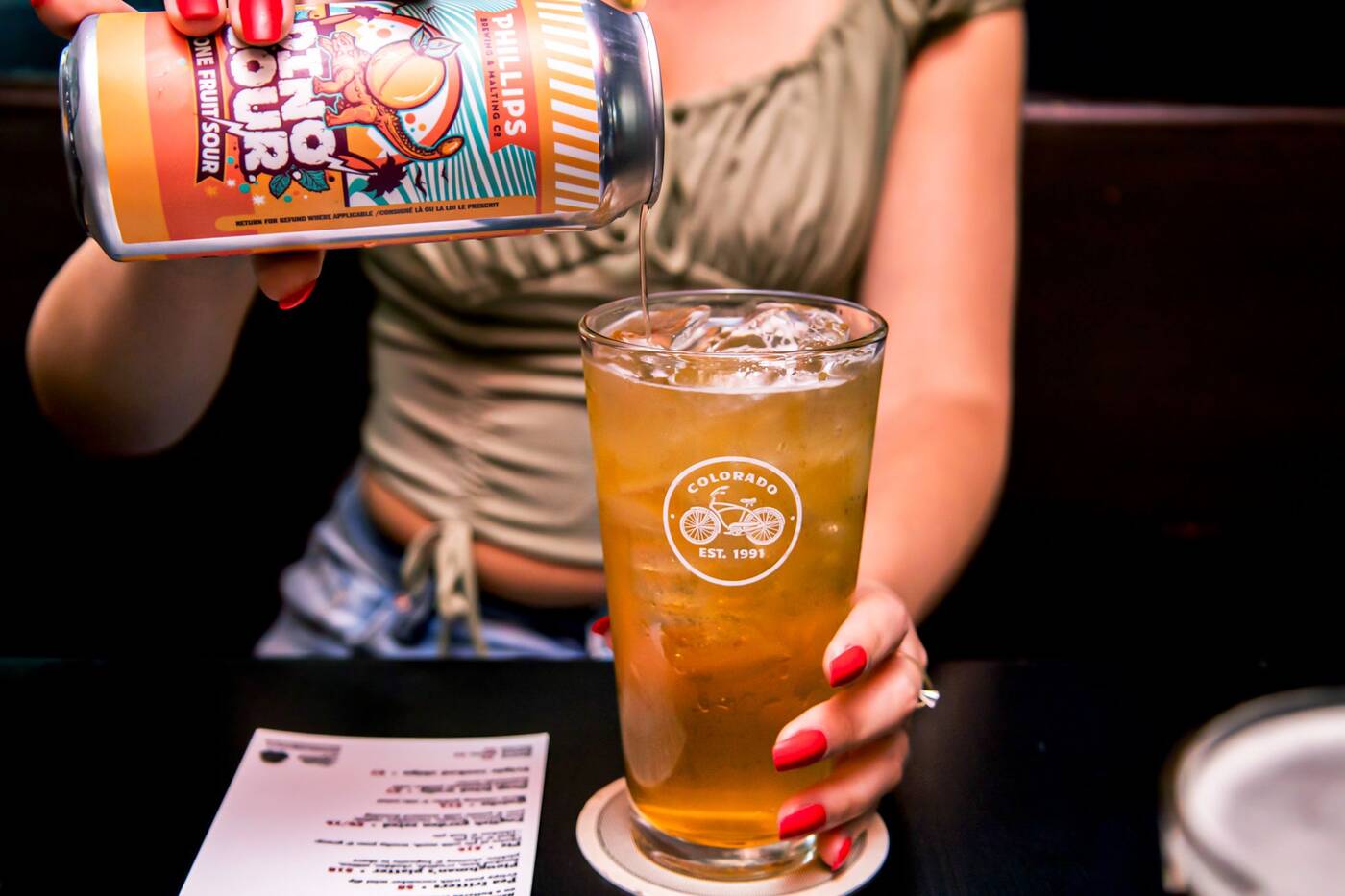 We tried this delicious sour ale called Dino Sour ($9.00) from Phillips Brewing based out of Victoria, B.C.. You won't find this one in the LCBO, but if you stop by Man of Kent and you're a sour person, it's a must try.

Stone Fruit flavour is tart and resembles the taste of a fuzzy peach candy without being too sugary. 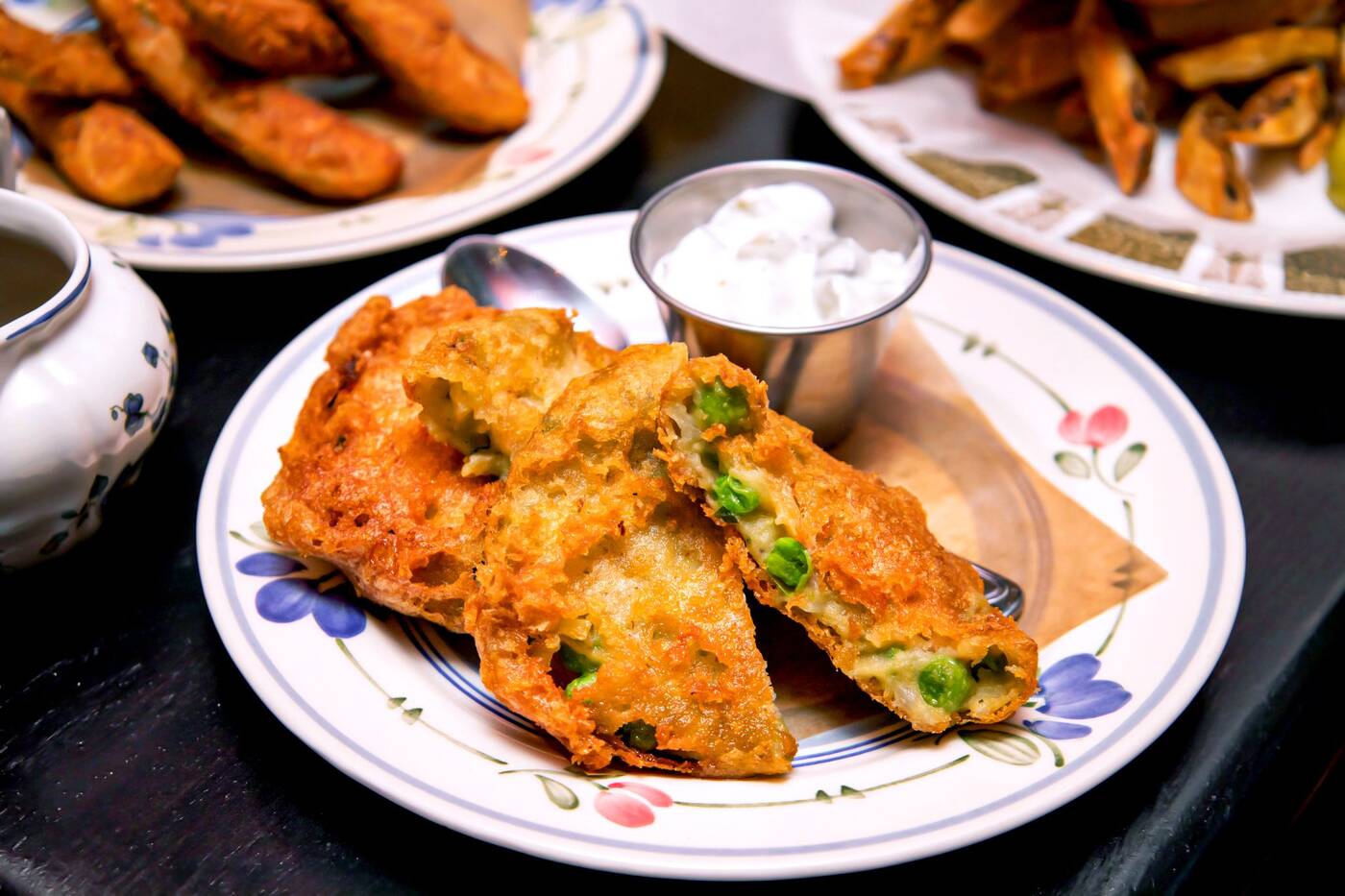 Pub food can be sort of a hit or miss and you're usually not expecting much for a plate of fries or wings, at least for what they serve in Canada. 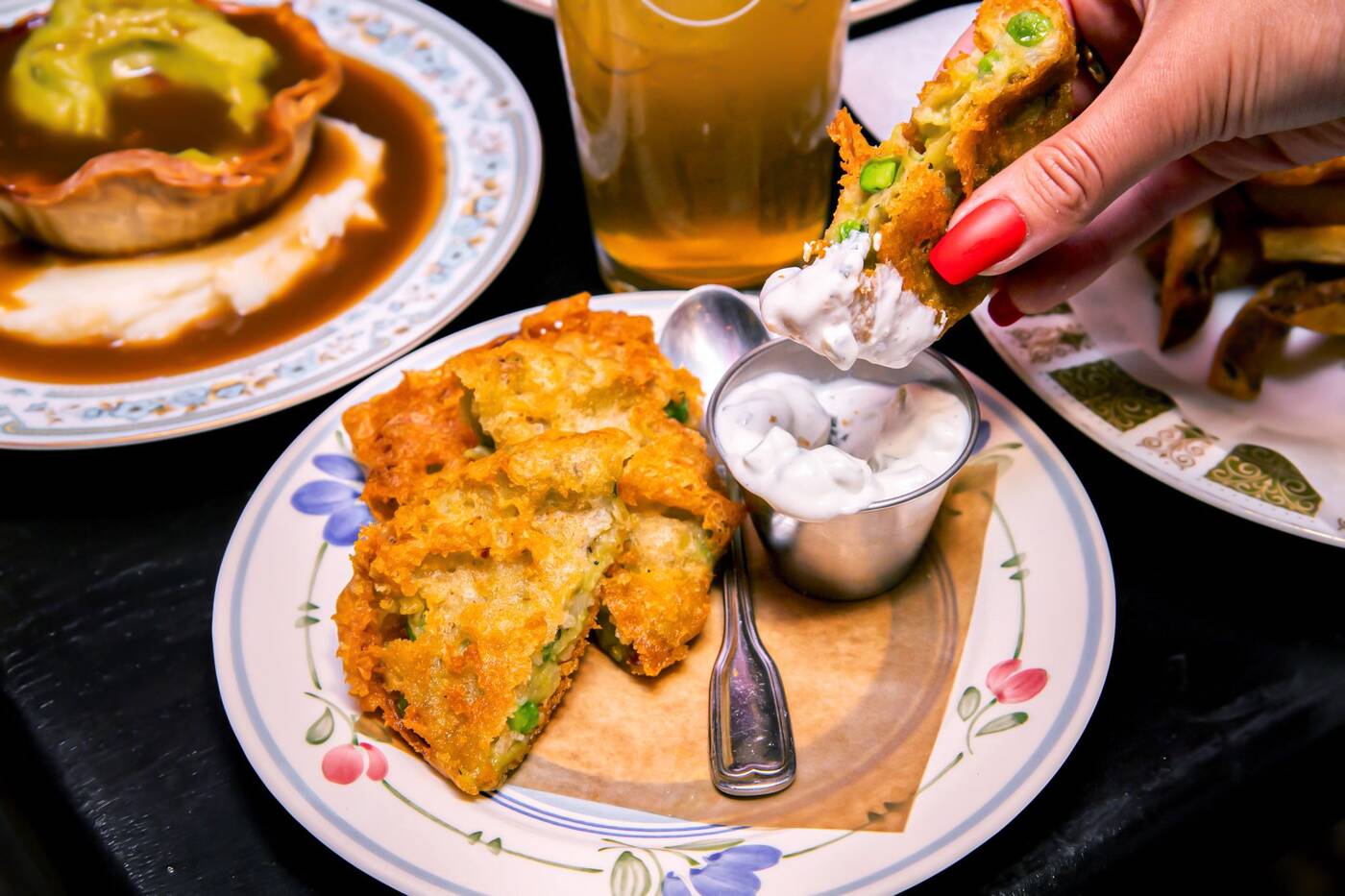 Man of Kent however has some great-tasting takes on classic English fare, like these Pea Fritters ($8.00) which is essentially small patties made with mushy-pea filling and then deep-fried and served with a creamy cucumber-mint sauce. 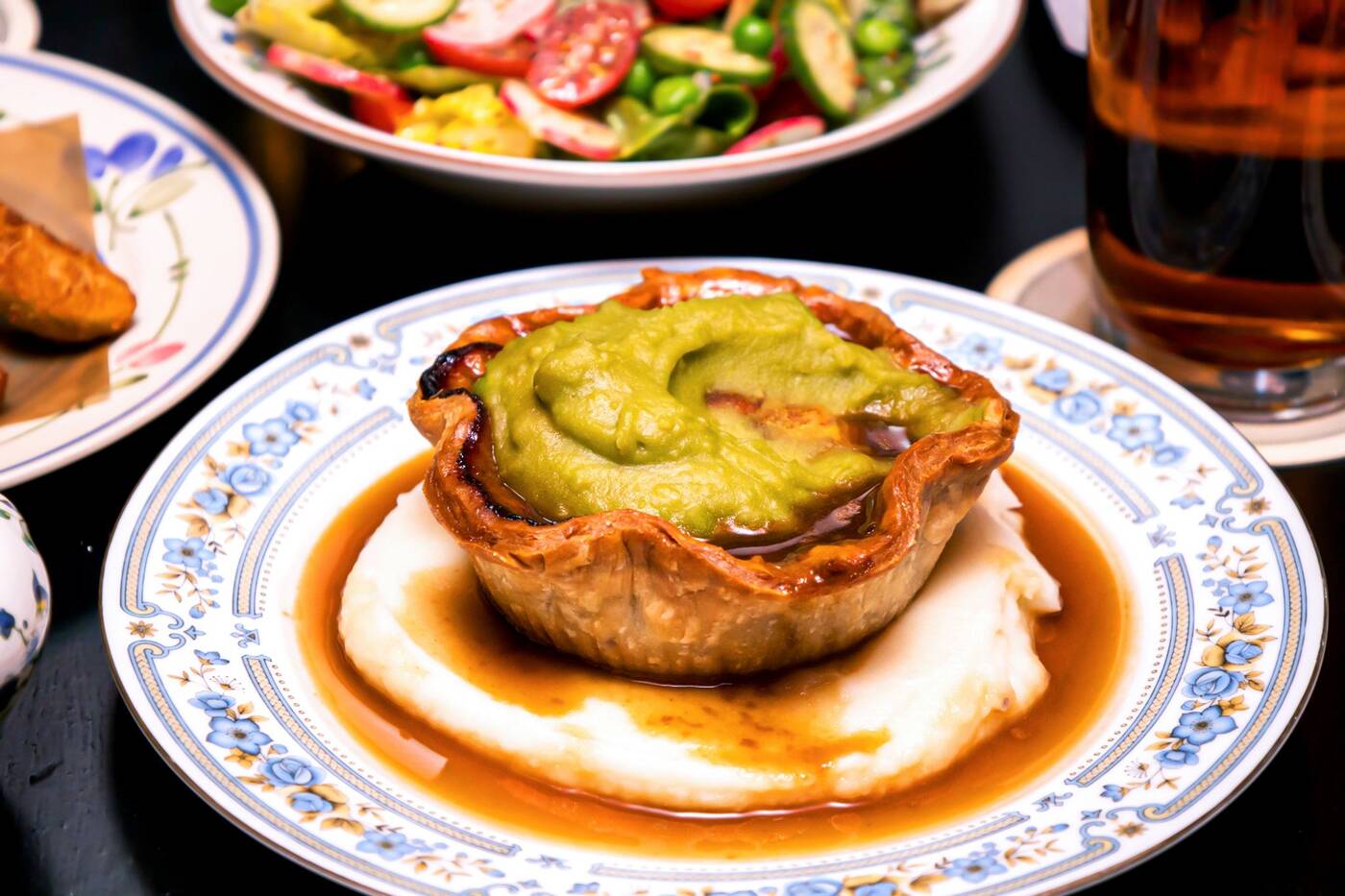 Pies by Squires makes an appearance on the menu here, the local pastry business features their Beef and Ale plus the Chicken and Leek pie ($16.00) that you see pictured here.

The crispy tart is served on a bed of warm mashed potatoes and topped with a thick coat of gravy and mushy pea spread, covered in all the savoury goodness you would want in a dinner pie. 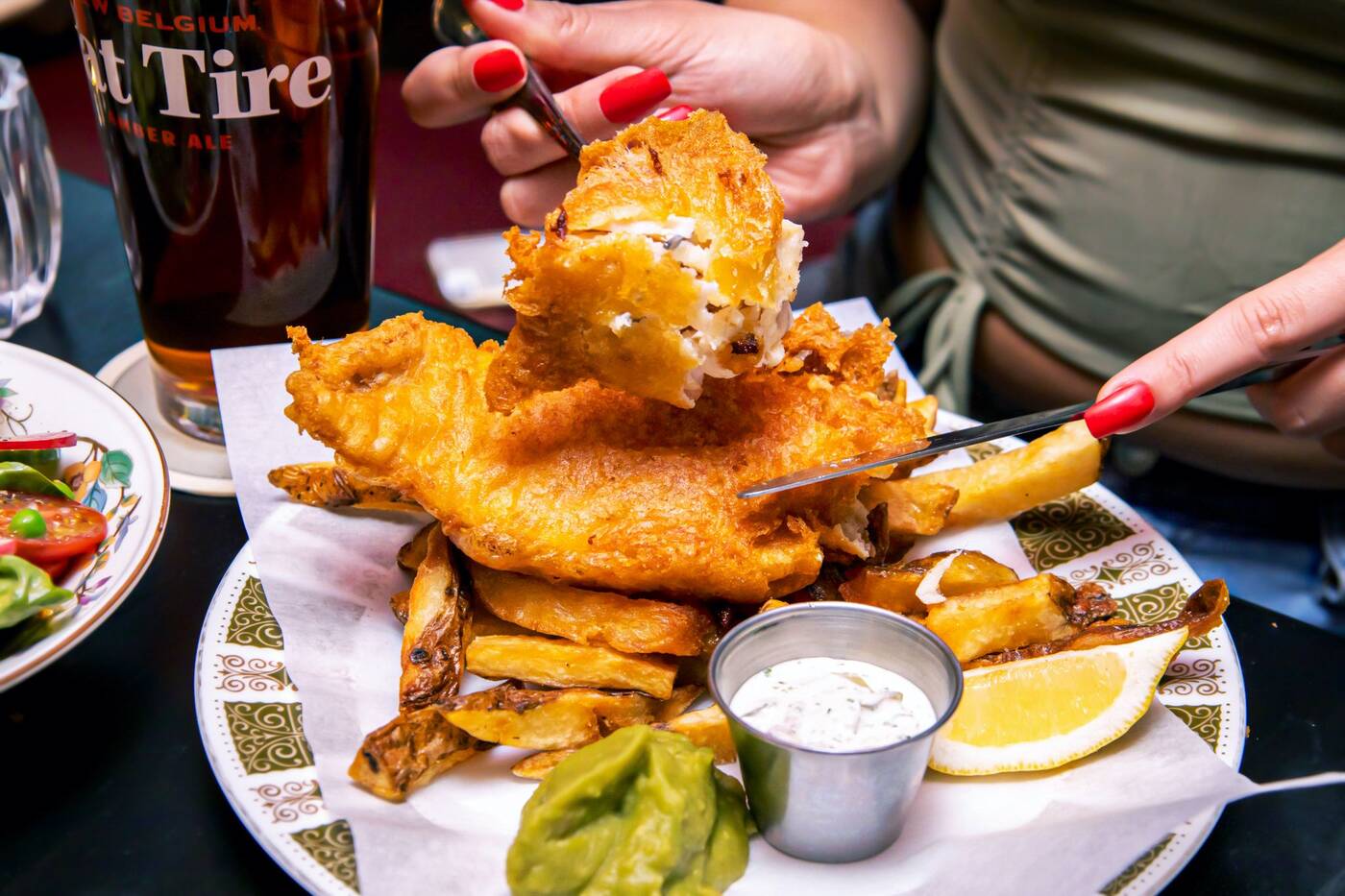 Hefty plates of Fish and Chips ($16.00)  are served here that come with just the right amount of crisp, no soggy fries in sight.

While eating it, you aren't inundated with heaps of oil either, the piece of Atlantic haddock isn't lost inside all the deep-fried breading. Served with a house made tartar sauce and a dollop of mushy peas. 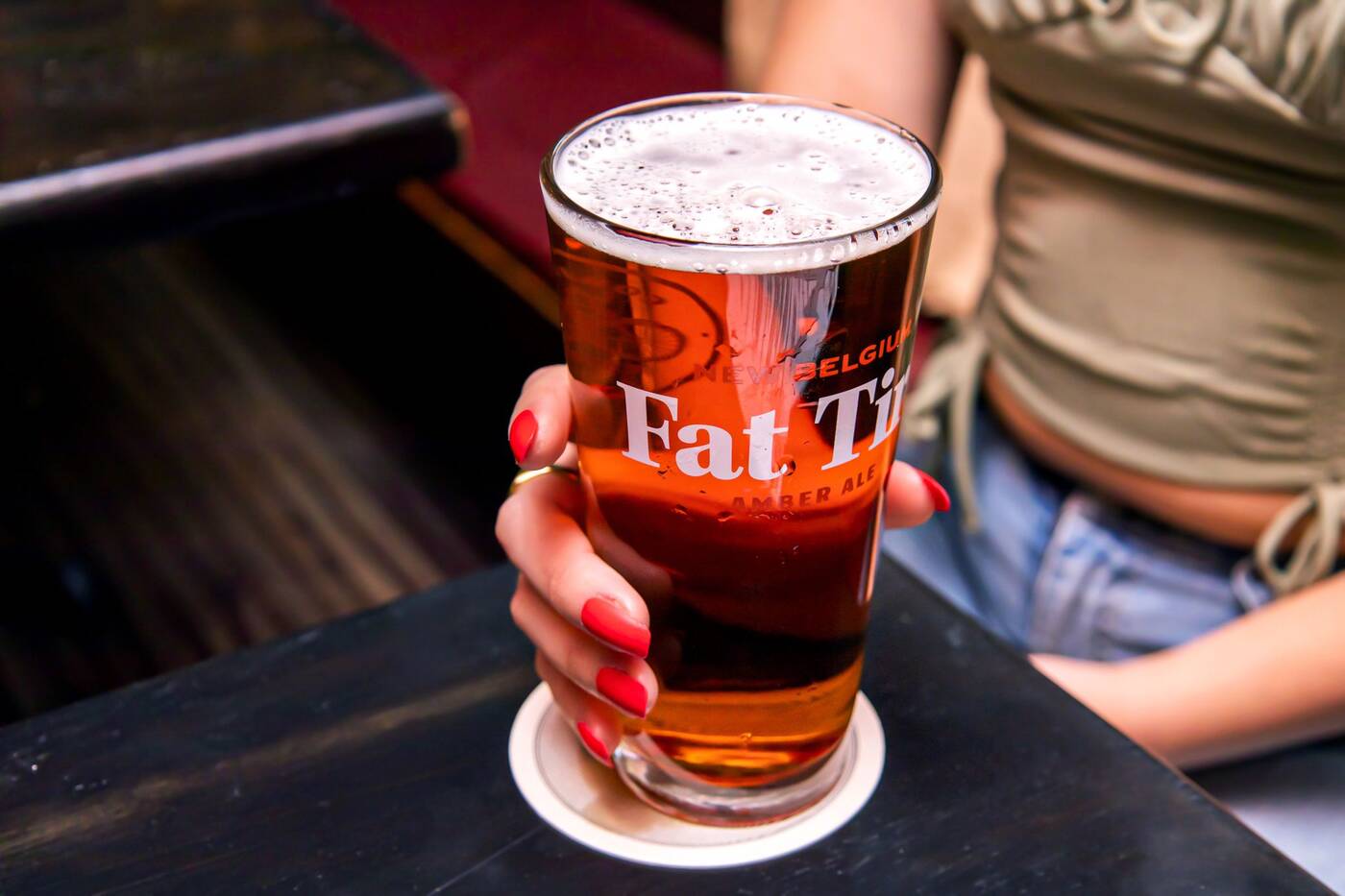 This amber ale called Fat Tire by New Belgium Brewing ($10.00) was more on the bitter side, but still paired nicely with a heartier dish like the Fish and Chips. It's poured fresh from the tap at the front bar. 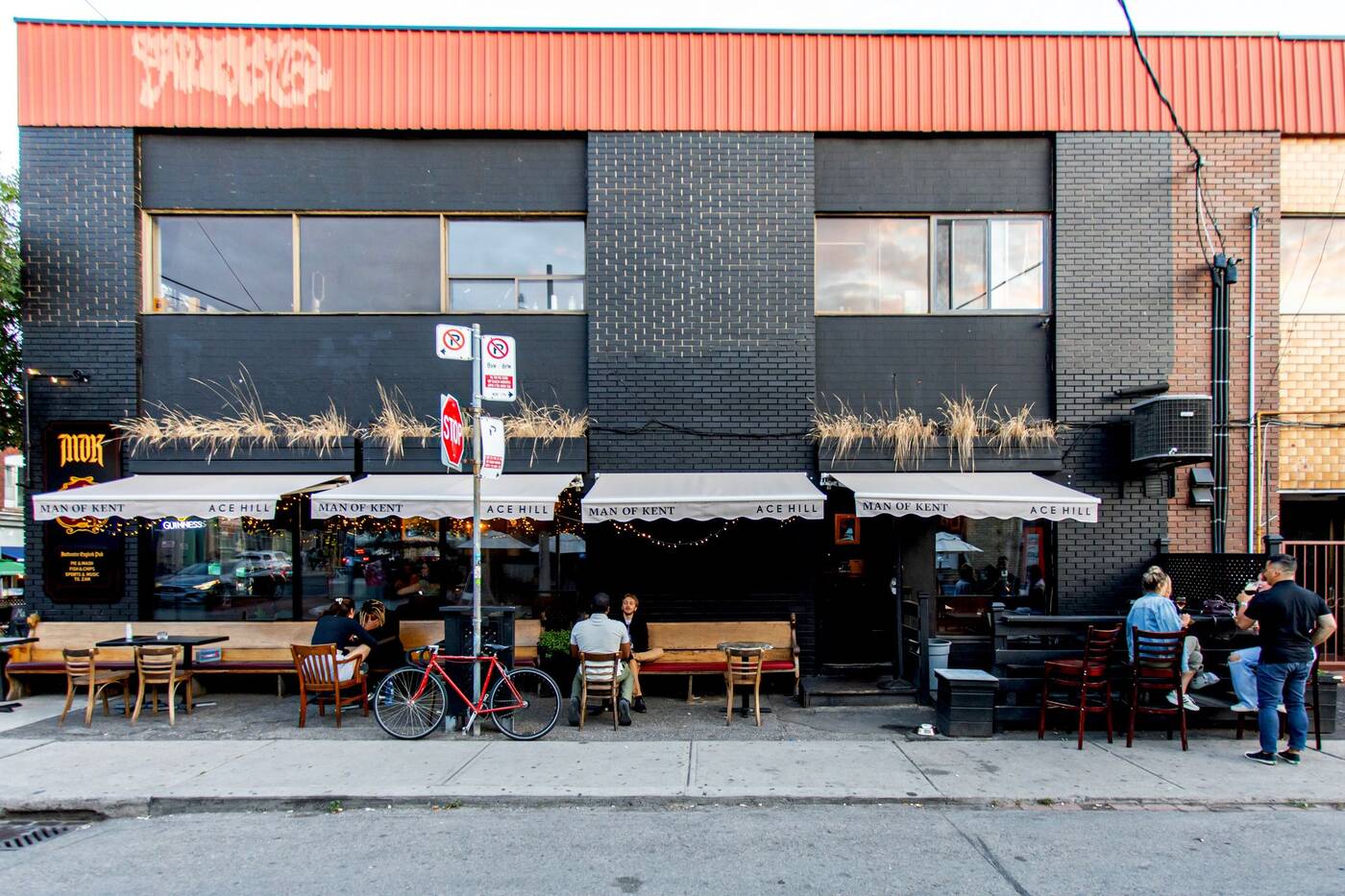 Man of Kent has a patio that sprawls across the side of the bar's building, creating space for larger, rowdier groups who want to have a drink while still being present with the hustle and bustle of Lower Ossington.