Laylow on College is a nice place to slip away for the night. They mostly sling Belgian and German-style beer rather than local offerings so don't go here if you're looking to sip on the latest Burdock or Blood Brothers release. 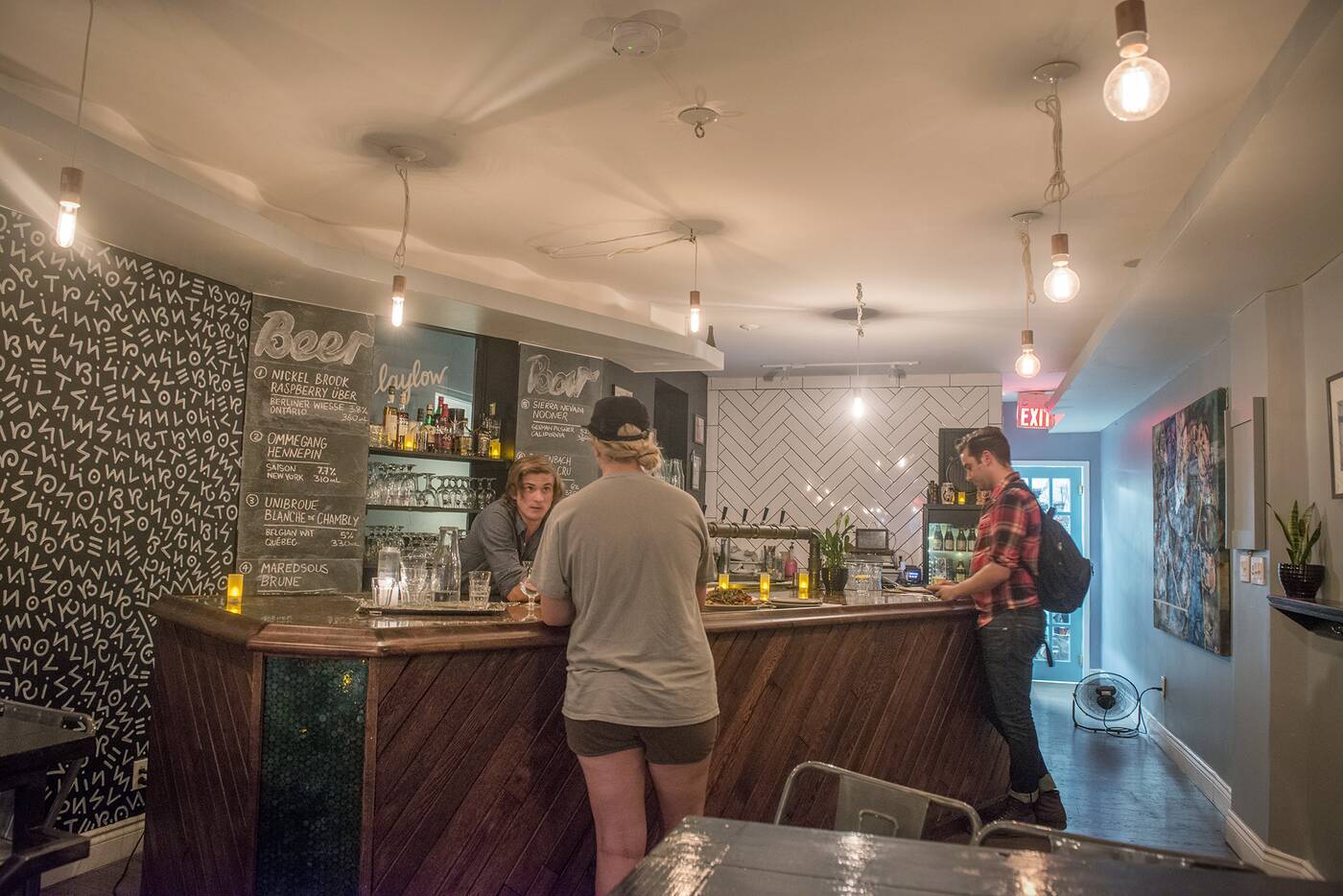 The atmosphere is super chill, with ambient warm light and hip hop music playing, books about music and hip hop scattered around the bar.

They also serve food here with cute names like "Flaming Moe" (no, it's not a drink) that ranges from snacky and sharable to full-on meals. Menus are clipped to vinyl 45's. 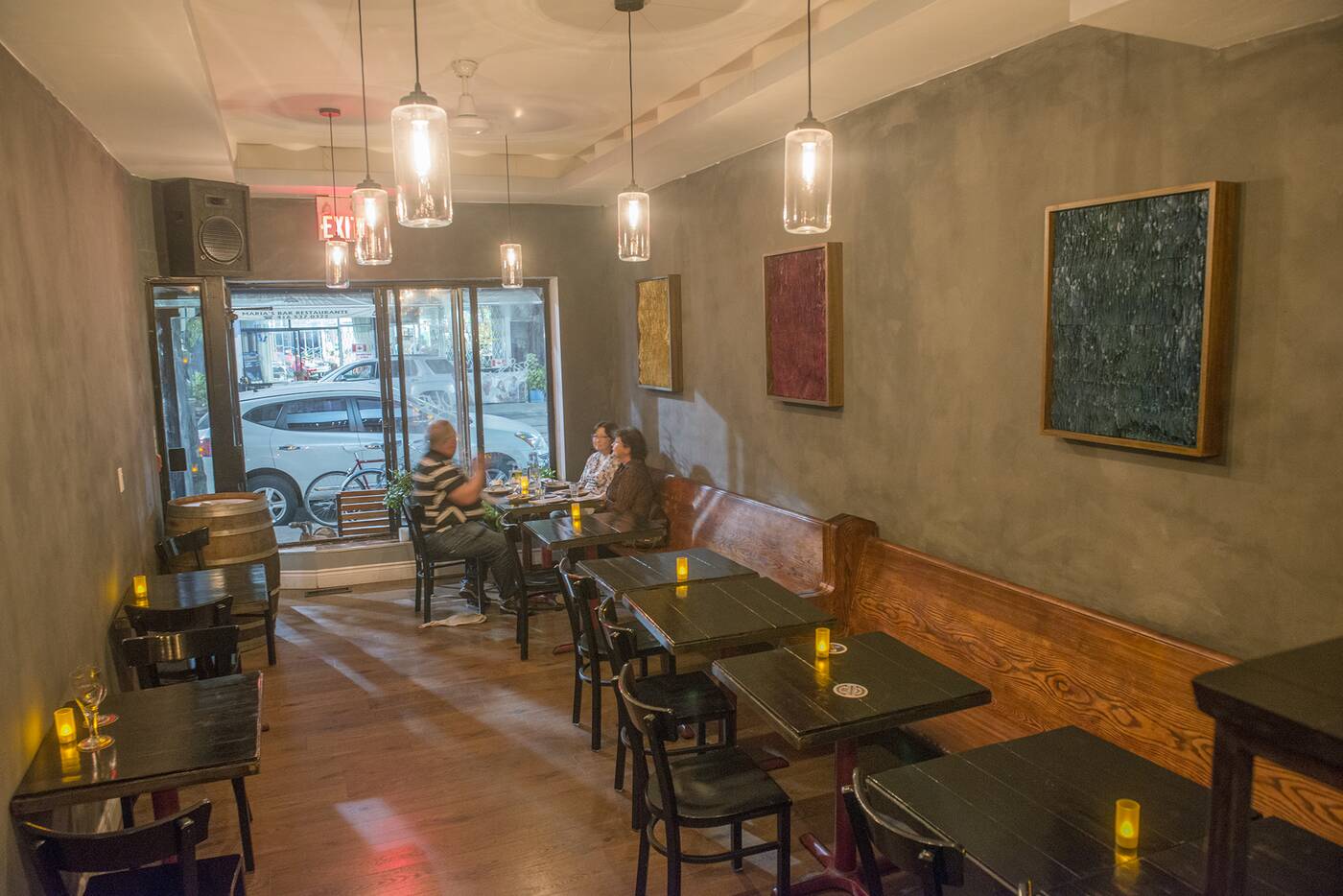 The inside is cozy with a big giant window at the front, seating area and a standing room focused bar area decorated with a mosaic of our old discontinued pennies. 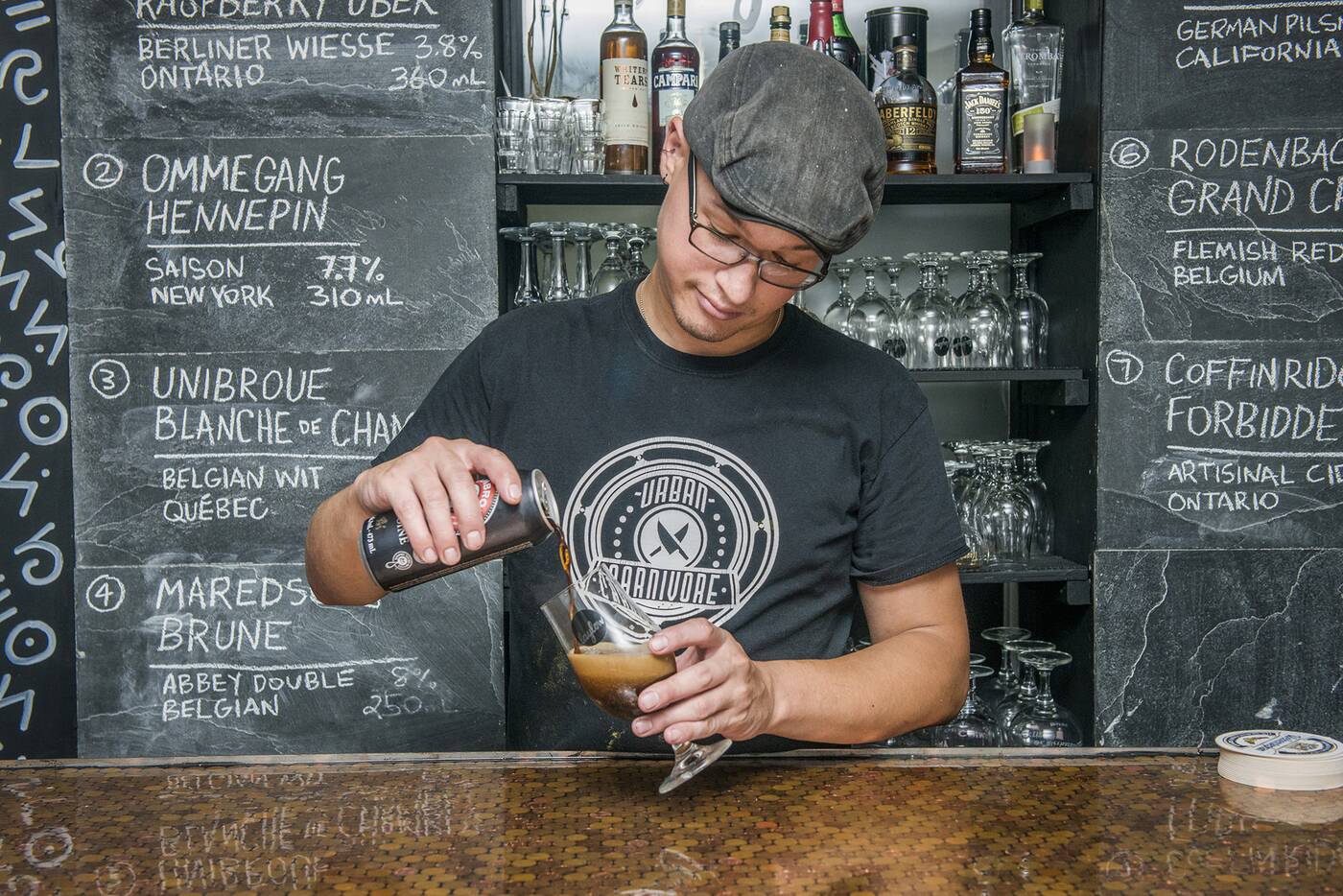 For a beer that's accessible to pretty much everyone (maybe too accessible) we grab a Sierra Nevada Nooner on tap.

It's a German pilsner style beer from California, and at 5.2% it's hoppier than the average pilsner but almost too drinkable - hence the name. If Laylow were open during the day I'd be tempted to take a long lunch with this beer. 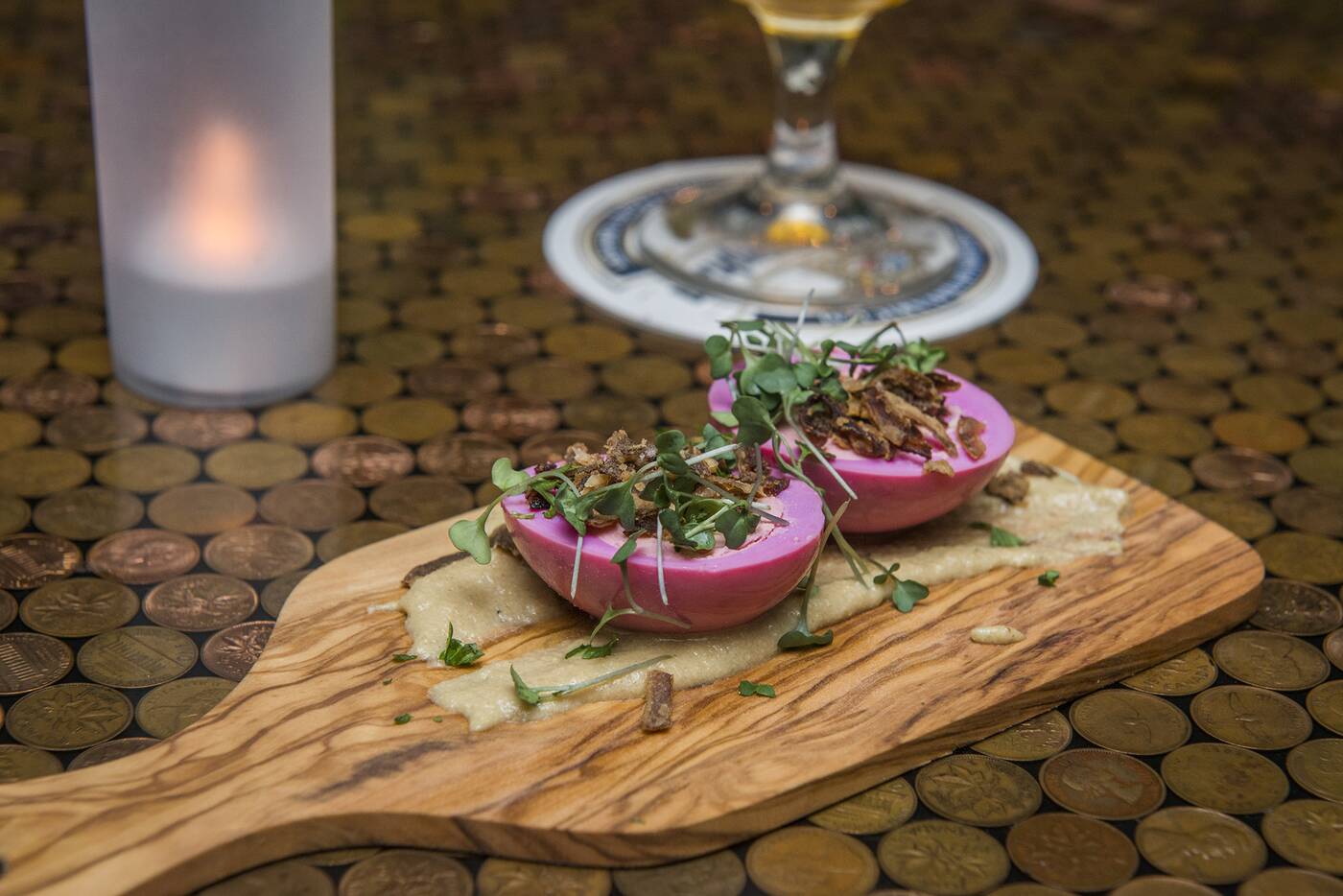 The aforementioned Flaming Moe ($4) is actually a beet-infused pickled egg rather than anything resembling the inflammatory cocktail from a Simpson's episode.

It's topped with crispy onions and some greens, and rests on a smear of beer mustard that they use in several recipes. Food is served until about ten or eleven, eleven-thirty on weekends. 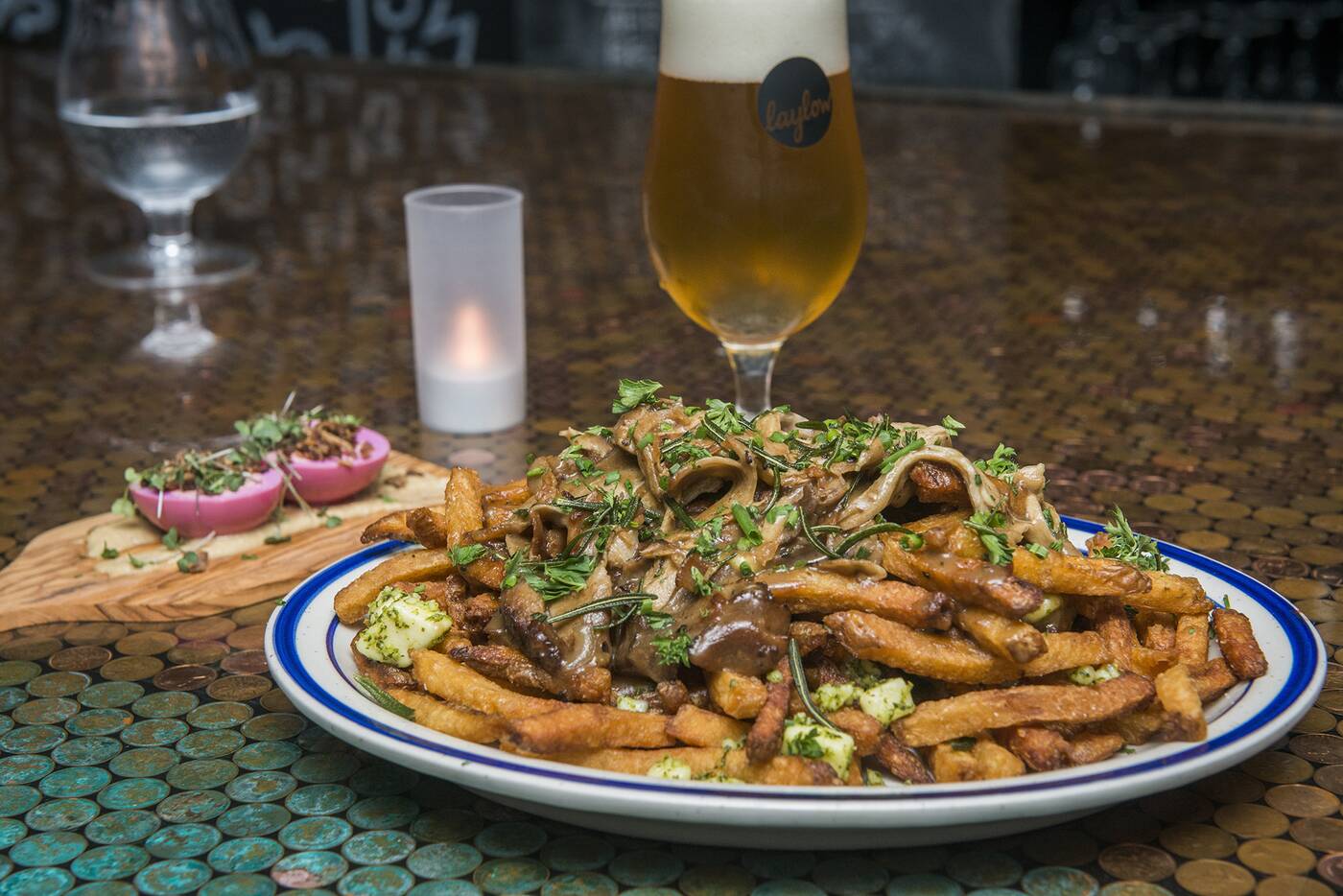 So basically...they have porchetta poutine here ($16). It's a heaping helping, huge enough for two hungry people to split.

Chef Aidan Ferreira wraps up pork belly and pork shoulder with lemon, garlic, rosemary, thyme and fennel then slow roasts it for five to six hours and shaves it to create the porchetta, and marinates the cheese curds in basil pesto.

The fries are also hand cut and double cooked, blanched in oil then fried to ensure they stand up to the heavy gravy, which is made in house and uses beer as an ingredient. 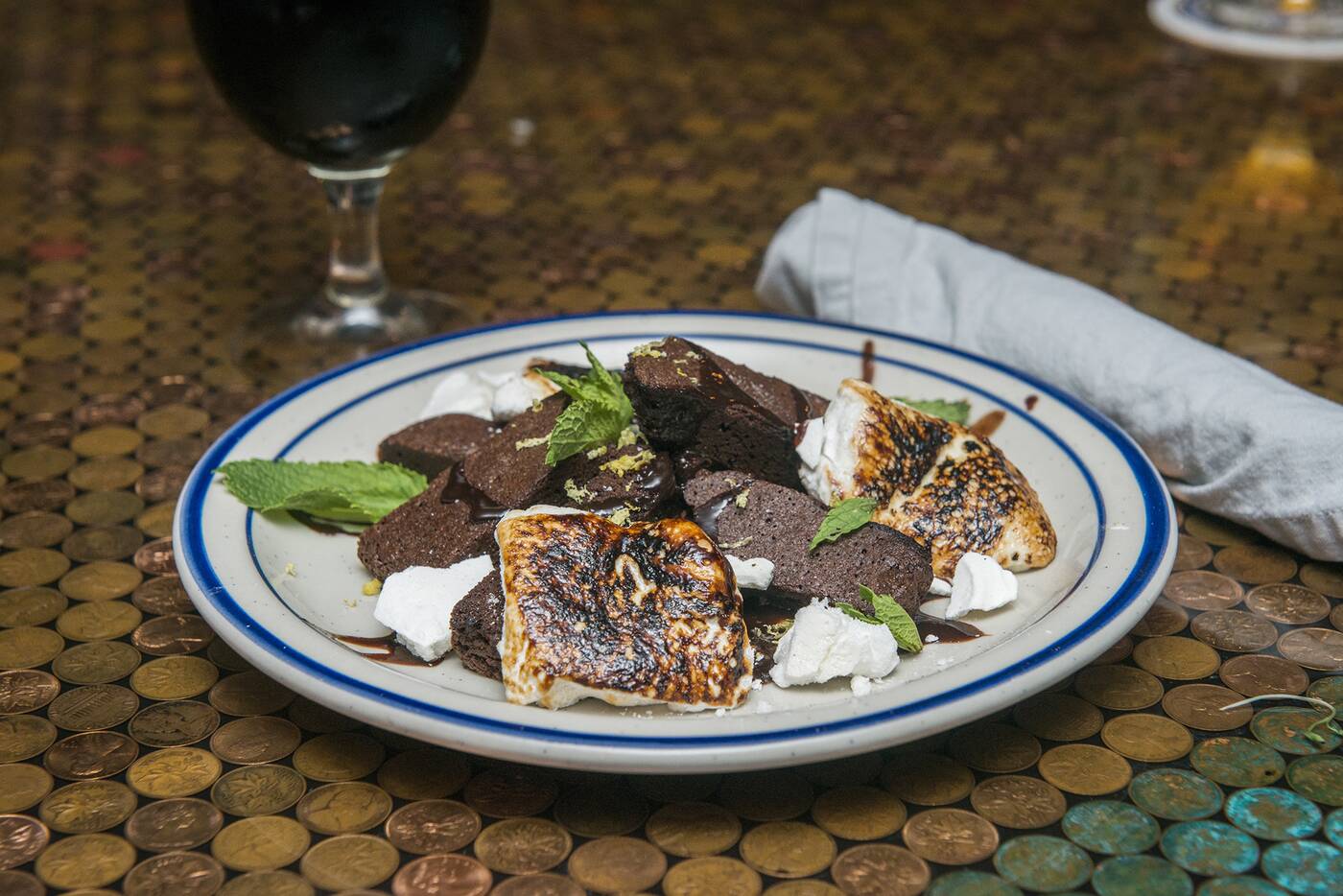 They also do dessert: the Snake Island S'more ($9) is a deconstructed s'more made with warm brownies made with stout, torched house made marshmallows, a graham cracker pretzel crumble, chocolate ganache and mint meringue, garnished with mint leaves. 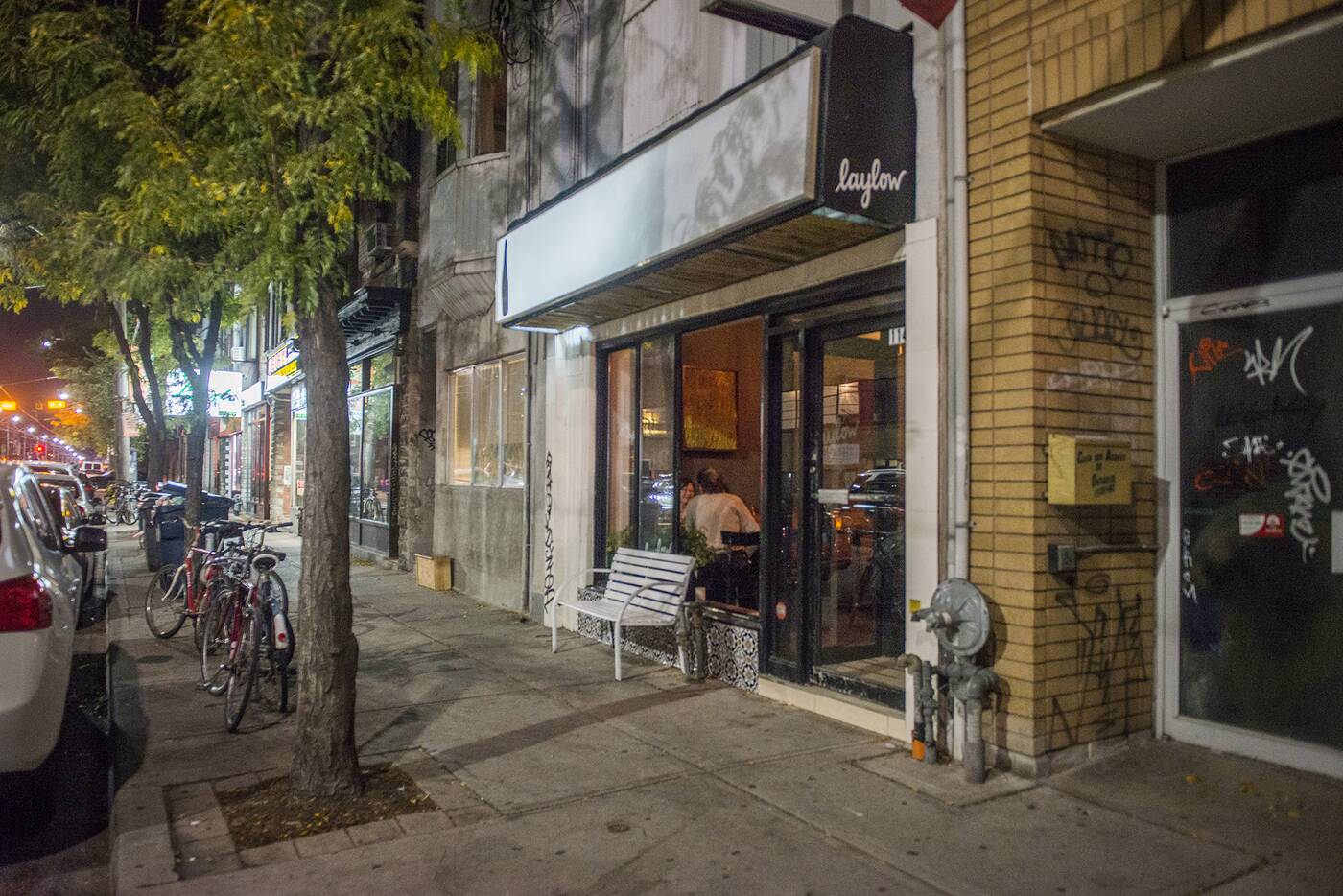