The concept of this spot is inspired by two-in-one cafes and bars that owner Tyler Kostman spent time in while travelling in Spain. 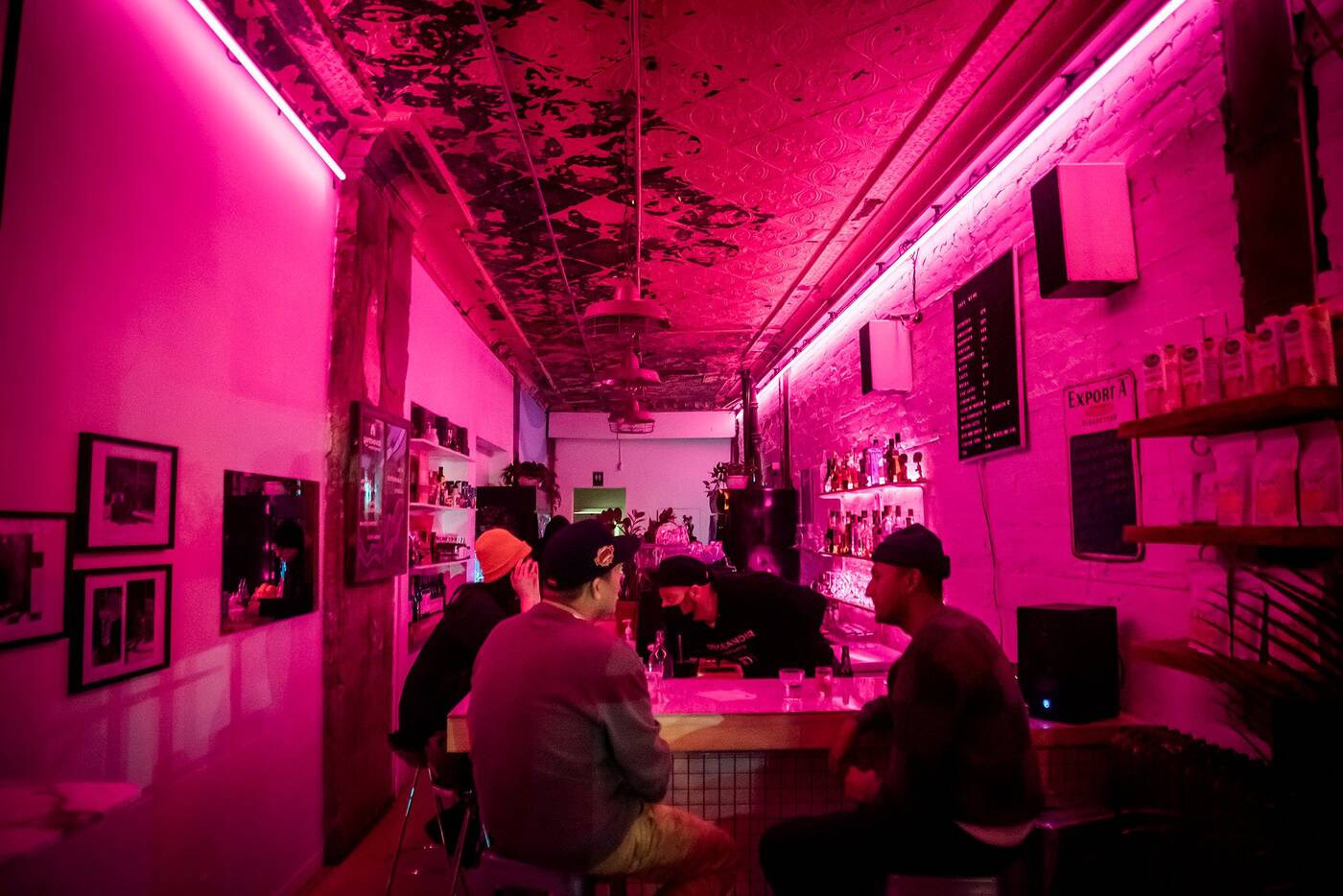 During the day, La Piscina serves as a coffee shop and mini grocery store with non-perishables and meats stored in the back area of the bar. 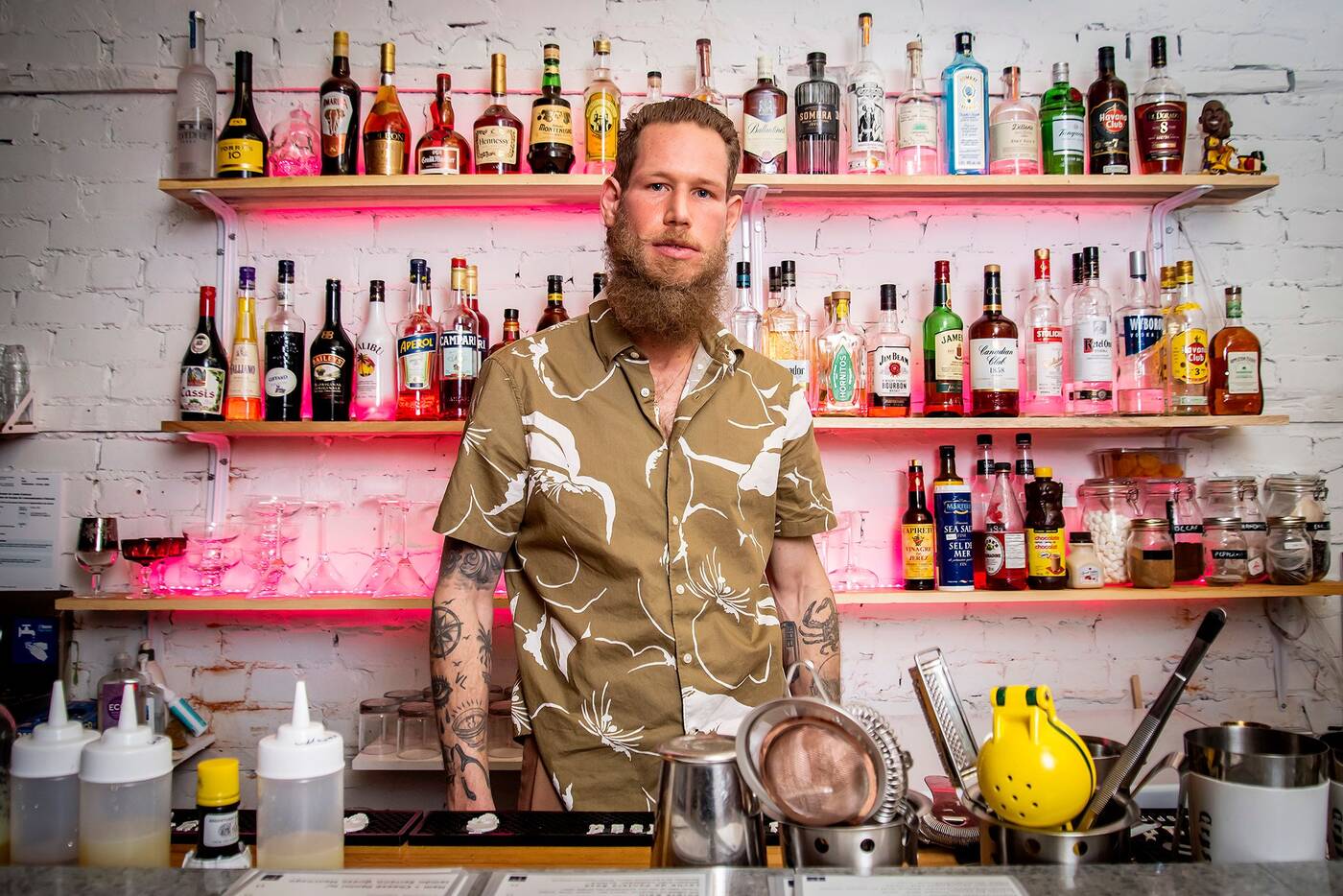 The food shop component came into play during lockdowns, as a means to keep the business afloat, Kostman tells blogTO. Prior to being re-named La Piscina,  the spot was known as Safehouse Coffee. 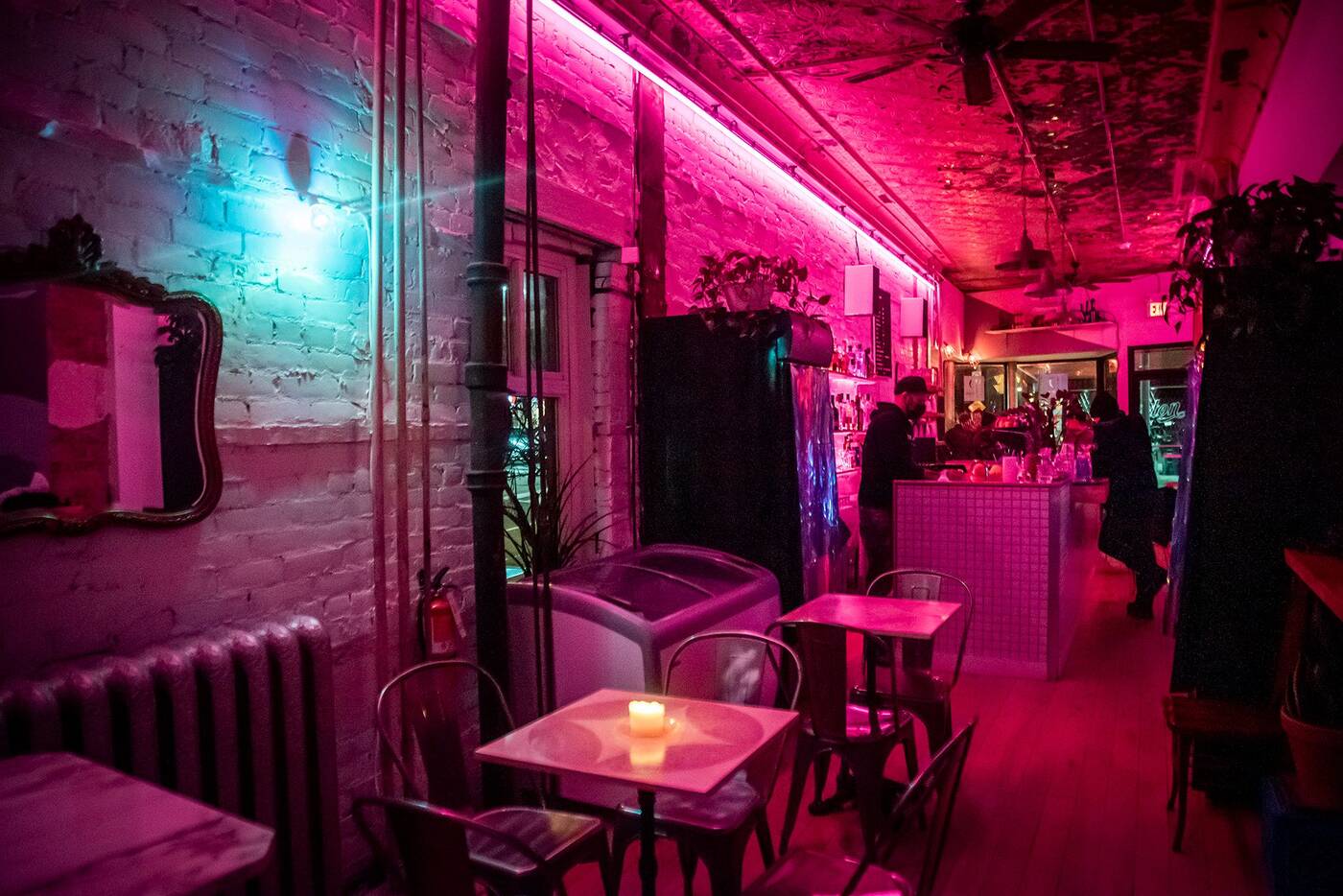 Nowadays, around 7 p.m., colourful neon lights turn on, food fridges are covered and La Piscina transitions into a full-service bar with DJs spinning the likes of deep house and hip-hop remixes. 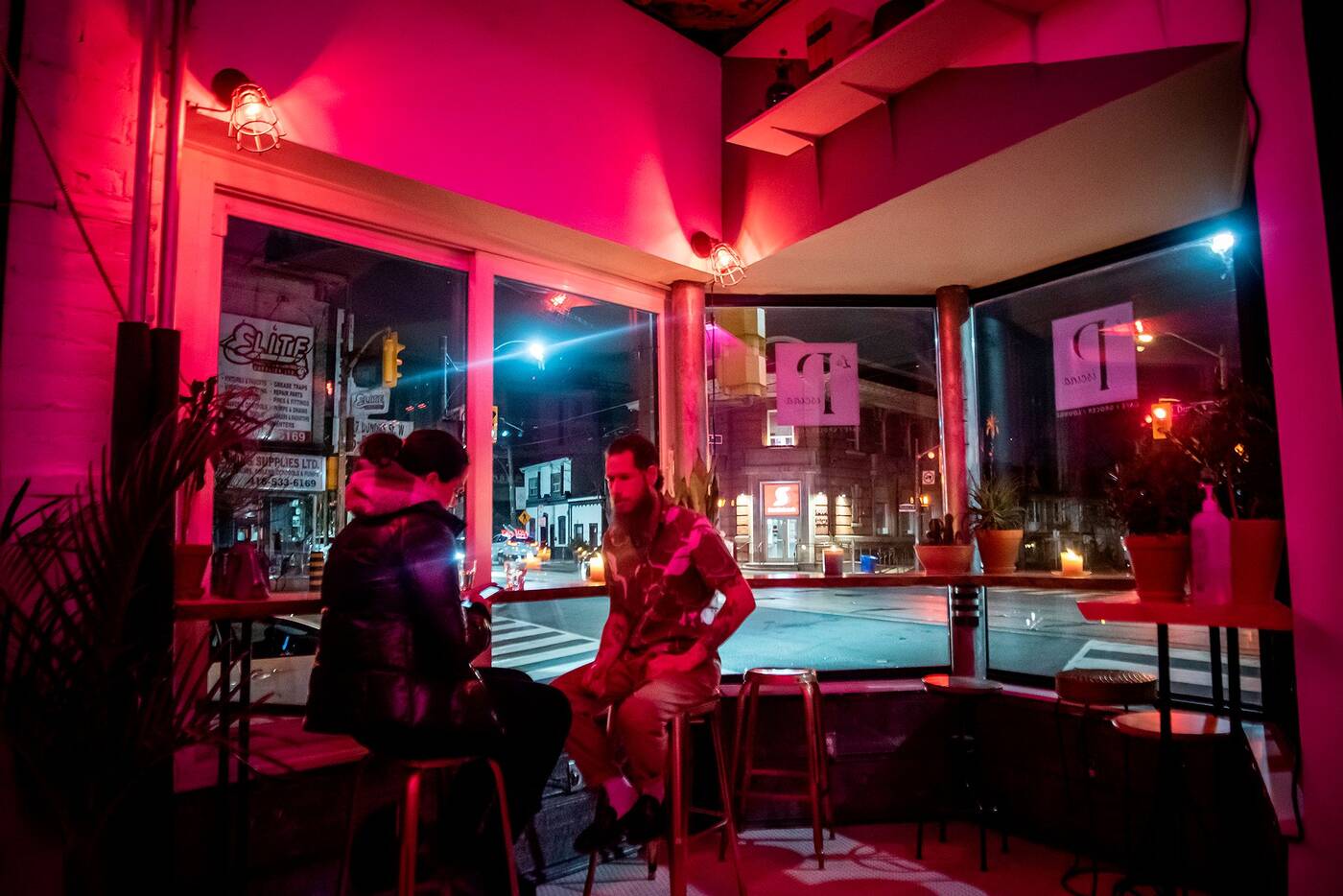 There's an adorable, intimate corner with stools facing Dundas Street West, where you can spend alone time with a date in front of candle-lit window panes. 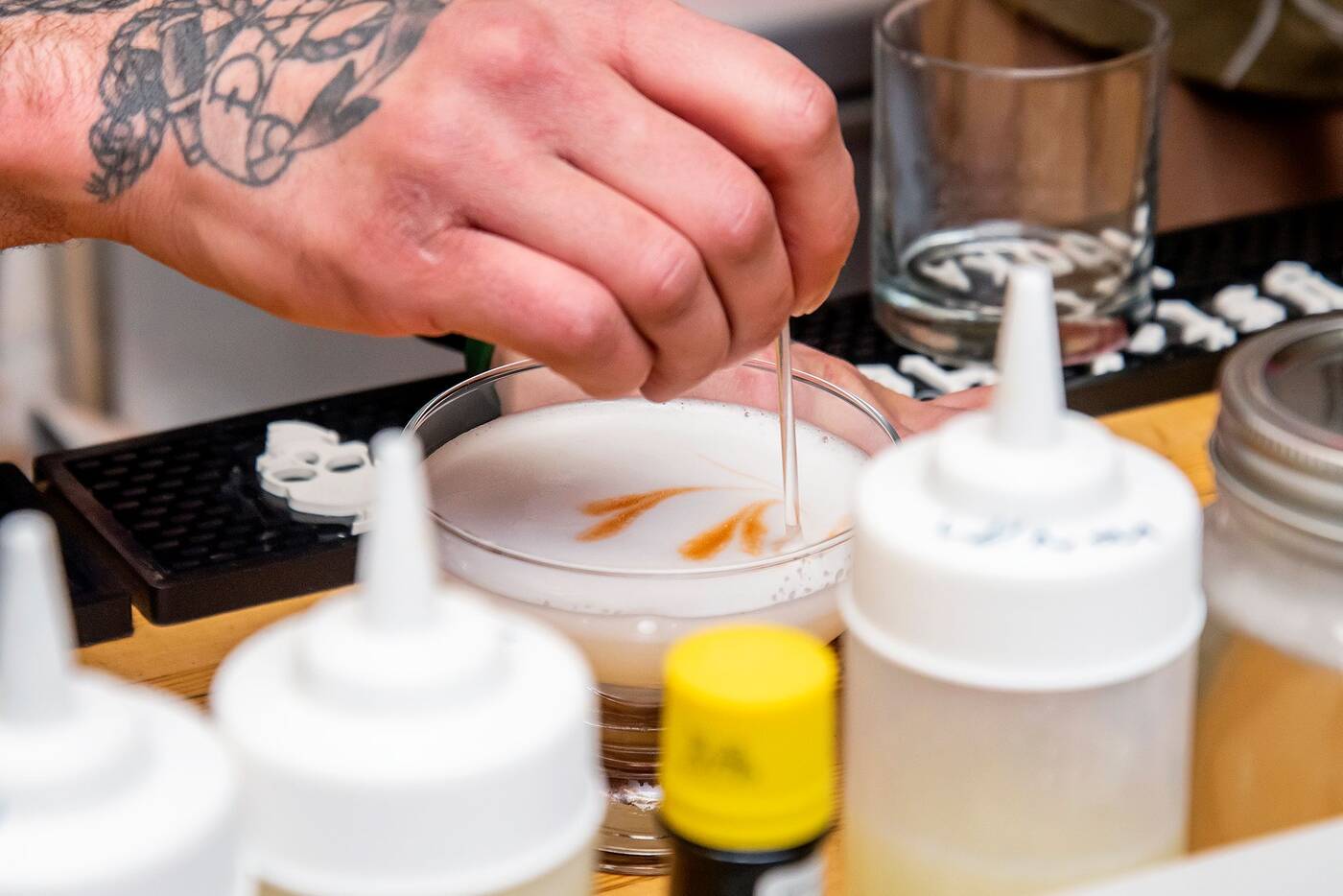 If you're not coming here for date night or to share drinks between friends, you might stop by for one of the many events hosted in the space, like live paint nights or fundraisers for local charities, such as Parkdale Food Bank.

Overall, this is the neighbourhood source for post-dinner drinks or pre-meal snacks that won't get you too full, if you've got other plans for the night. 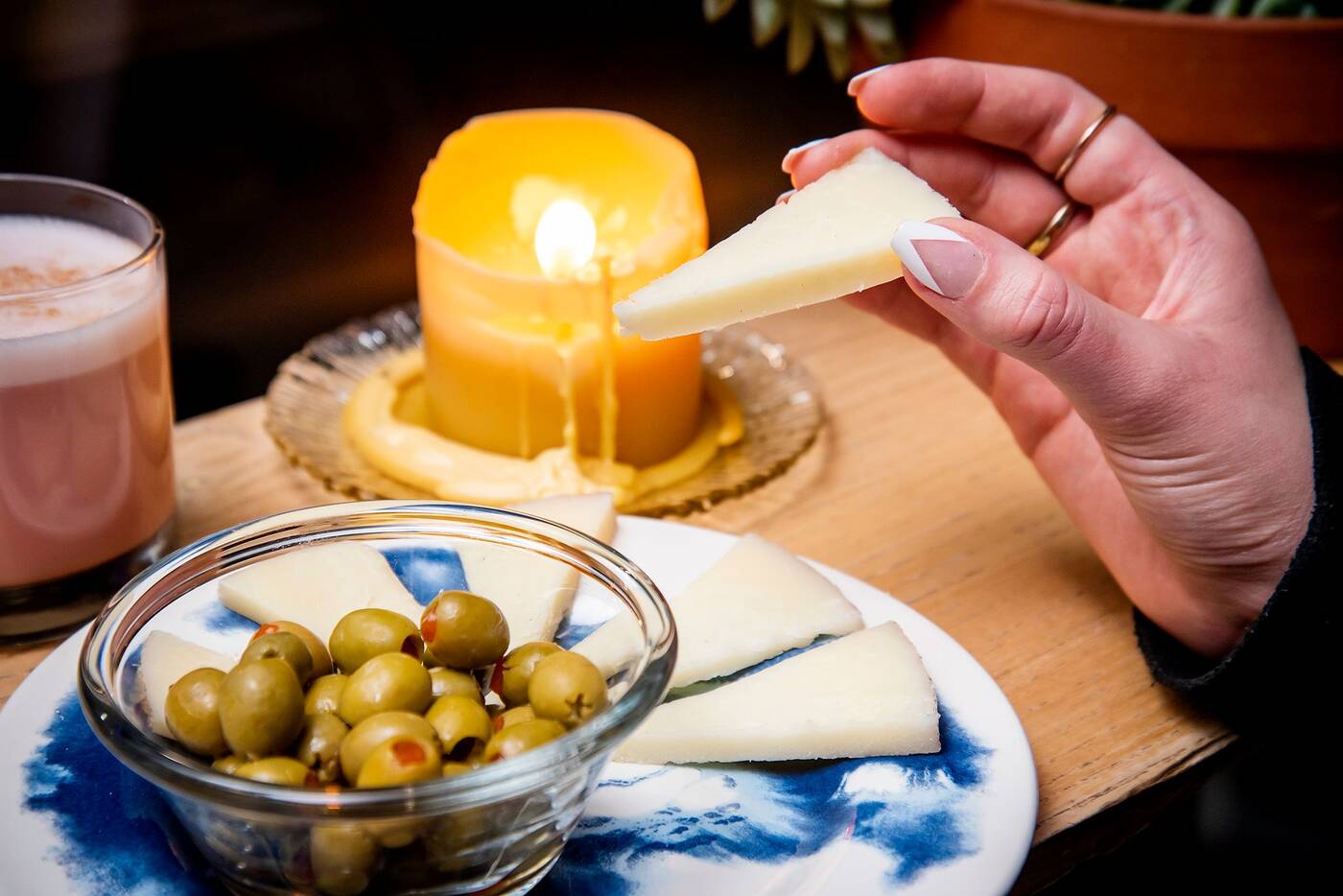 Grab the olive plate that's served with Manchego cheese ($5.00), both pair really well together. Expect this Spanish cheese to have a fragrant taste to it and compliments the tartness of the olives. 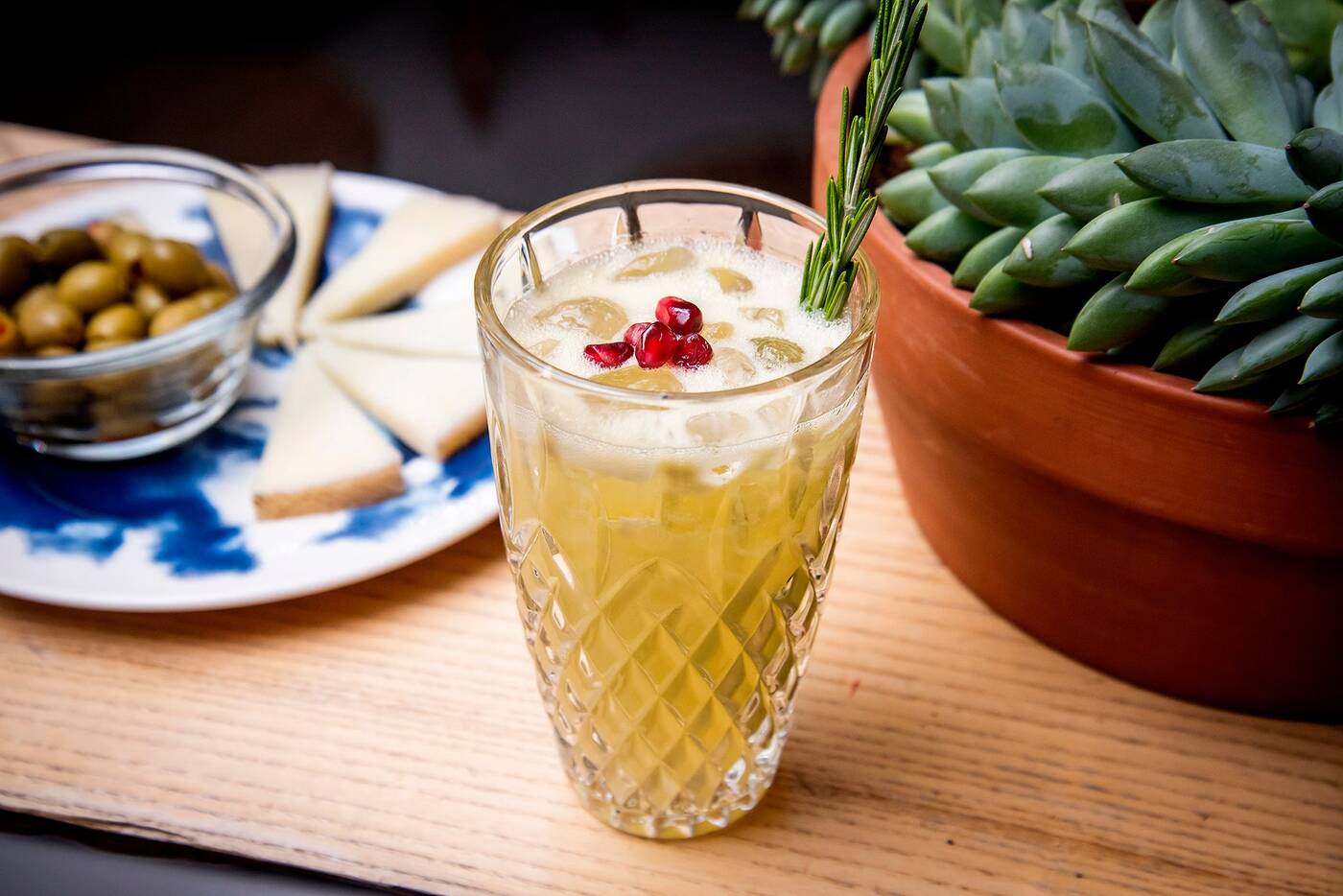 The Mango Mezcalito ($16.00) is a solid tequila-like cocktail, with a smokiness to each sip. Mezcal is shaken with Triple Sec, mango and lime flavours, then garnished with a drop of pomegranate seeds and a rosemary sprig. 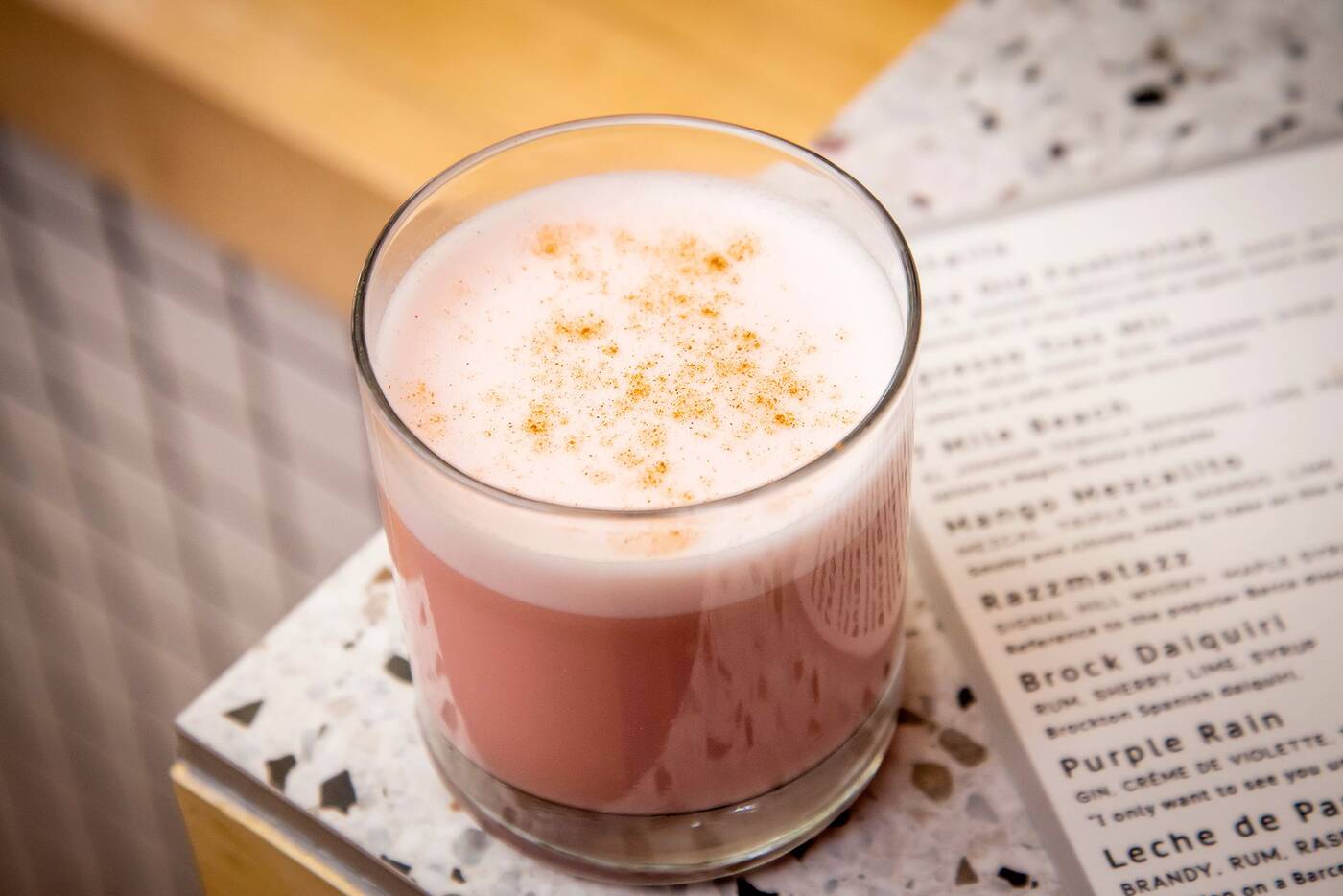 This drink is a take on a classic cocktail you'd find in Barcelona. Leche de Pantera Rosa ($14.00) is best described as a boozy raspberry Nesquick, without the dairy.

Brandy, rum, raspberry and oatmilk are combined to create a creamy, yet mild cocktail. No egg whites used in this one either, La Piscina makes their own foam from a secret recipe that's not only vegan, but also gluten-free. 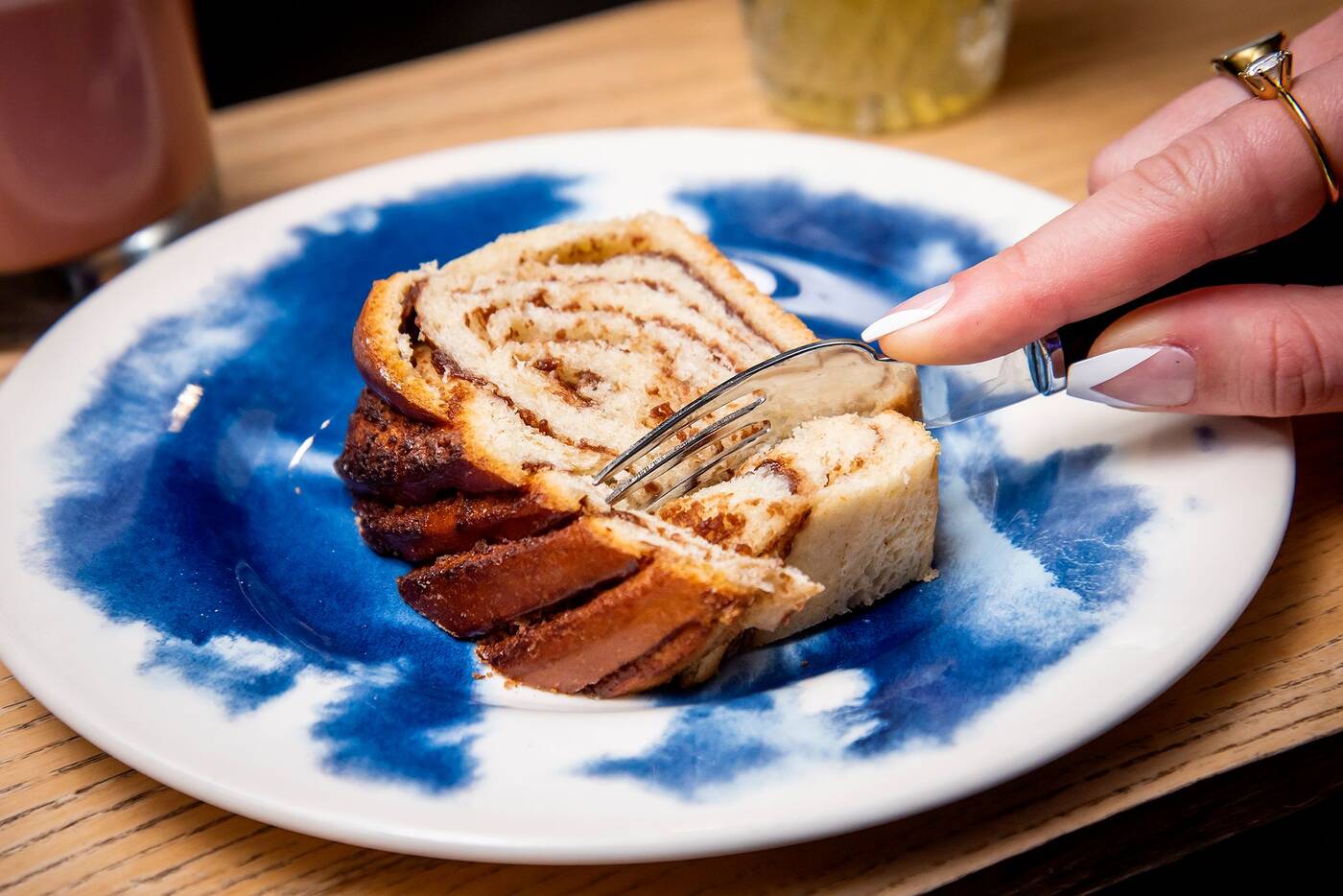 La Piscina sources it locally, made by Lev Bakery, and known as a popular dessert in Jewish diasporas. Each slice is filled with Tahini-flavoured chocolate ribbons between soft, sweet bread. 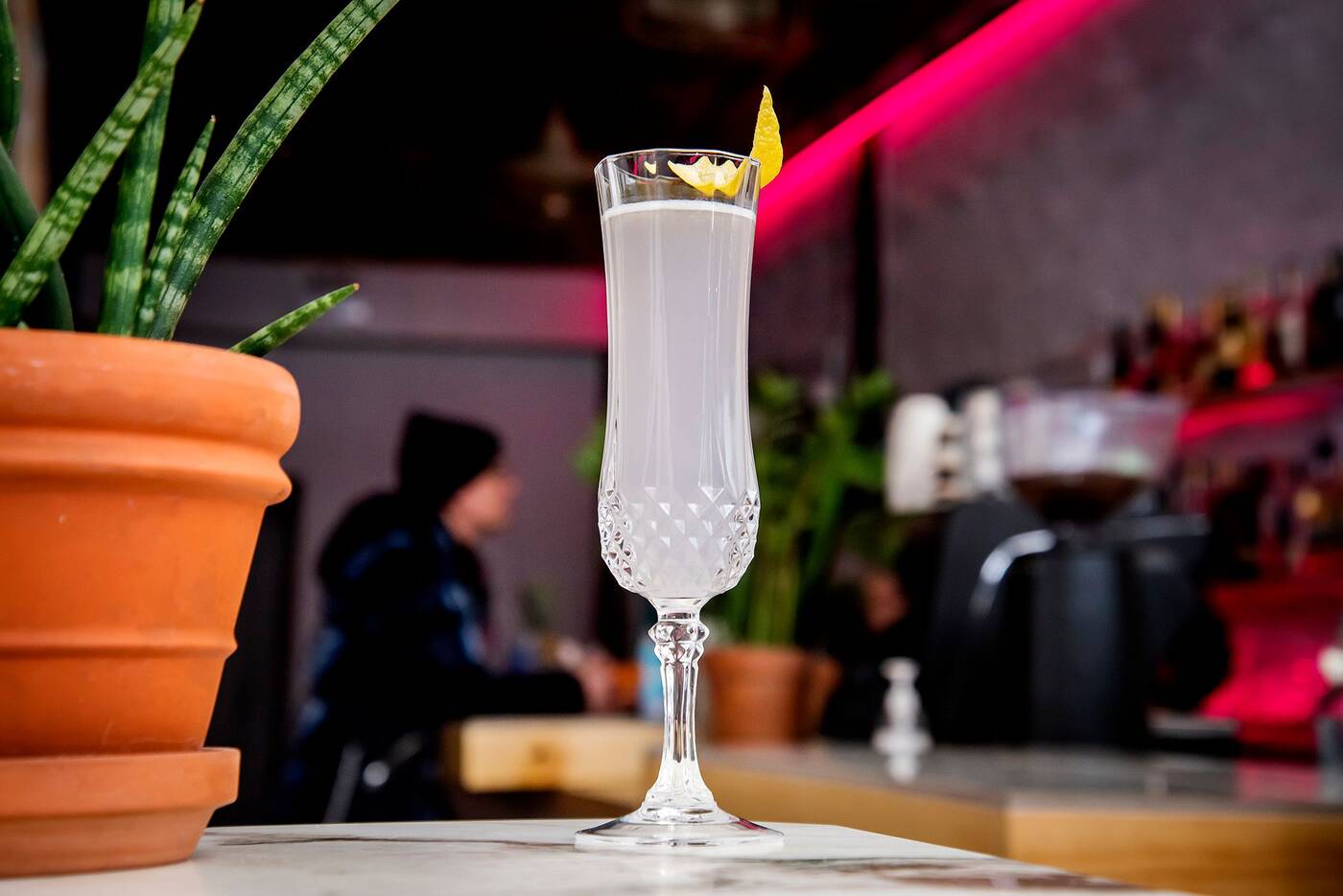 An alcoholic ode to musician Prince, check out Purple Rain ($15.00). Its taste does not equate to how it looks, expect a flavour resembling an orange tic tac.

Gin, Creme de Violette, and Triple Sec are mixed in with lemon juice and simple syrup, for a sweeter finish. 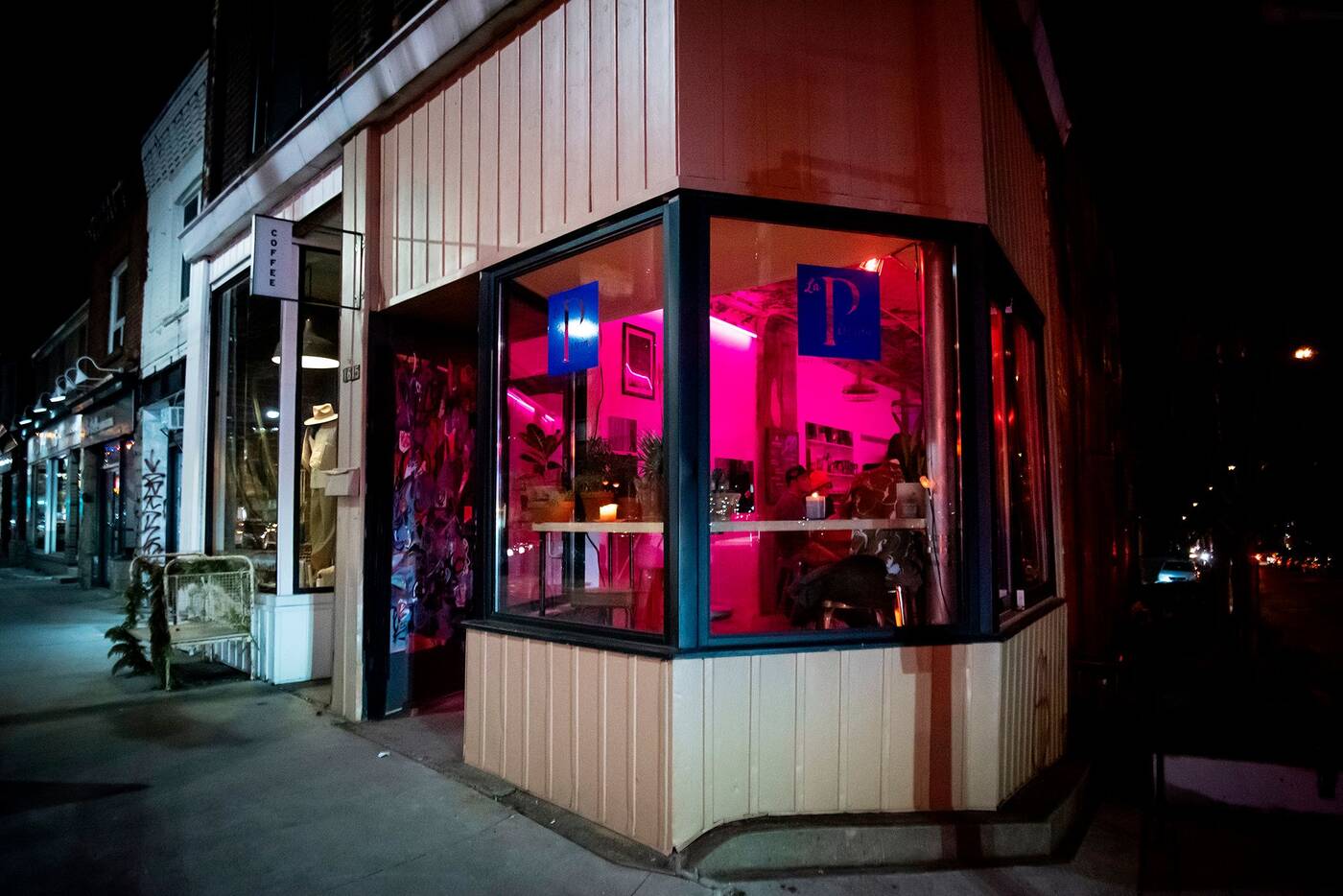 La Piscina wraps around the corner of Dundas Street West and Brock Avenue, just look for the neon pink hues that glow from within.