Adelaide Hall is a live music venue in the heart of the Entertainment District but at 10 p.m. on Thursday, Friday and Saturday nights it transforms into Mr. Goodtime. It's a Twin-Peaks-esque transformation where the club with a red carpet leading up to it turns into a roadhouse-style dive bar complete with neon, tall cans, and live music.

The whole building is a towering party empire that also encompasses Dublin Calling, Rock 'n' Horse Saloon and The Porch above it, part of a knot of megabars dominating this late night party district. This basement bar is the kind of place where you might find yourself ending a long night. 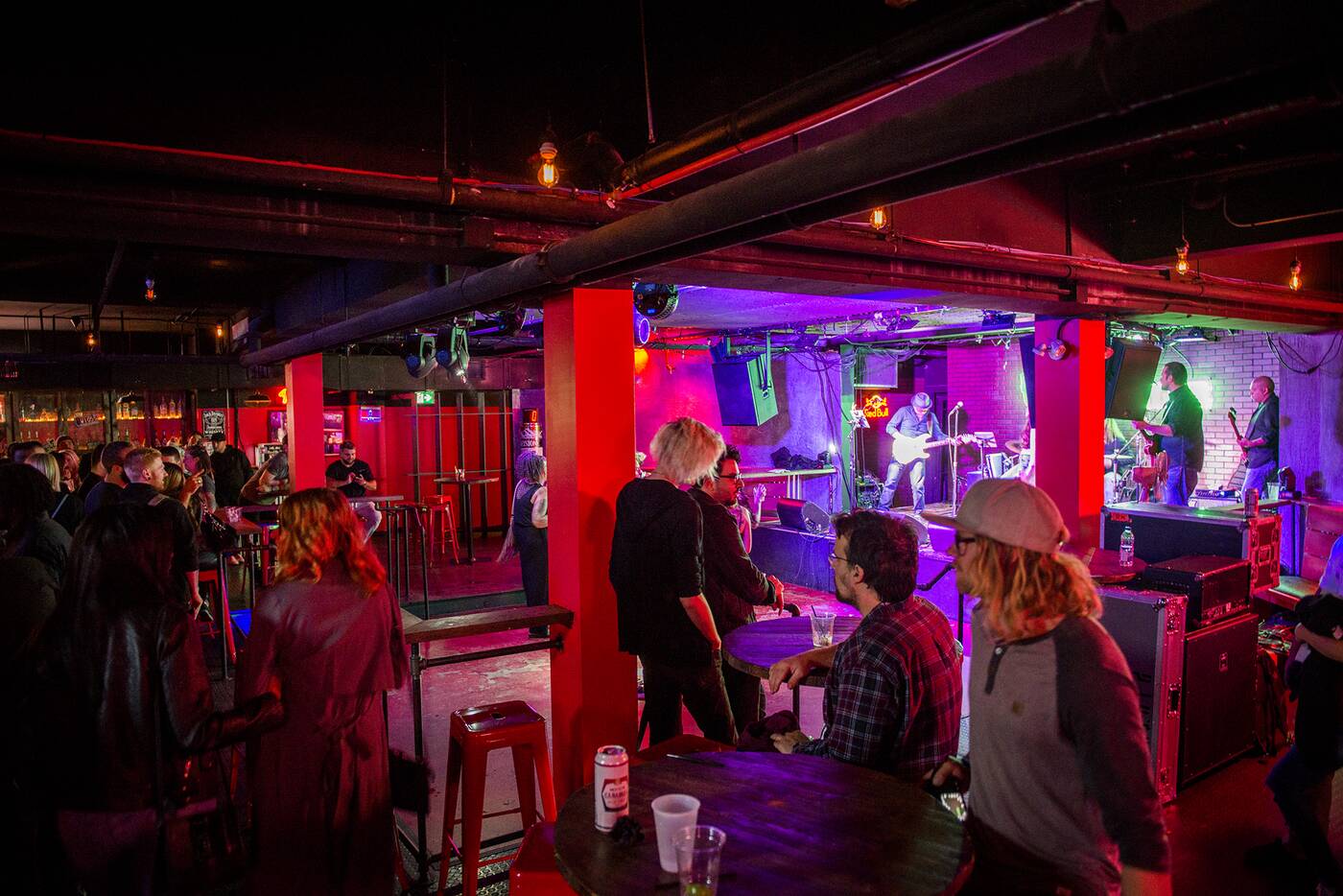 Everything centres around a sunken dance floor. Two bars sling tall cans of Coors, and there are seating areas positioned conveniently for dance breaks but this space is mostly dominated by rails and ledges meant purely for leaning and setting drinks on. 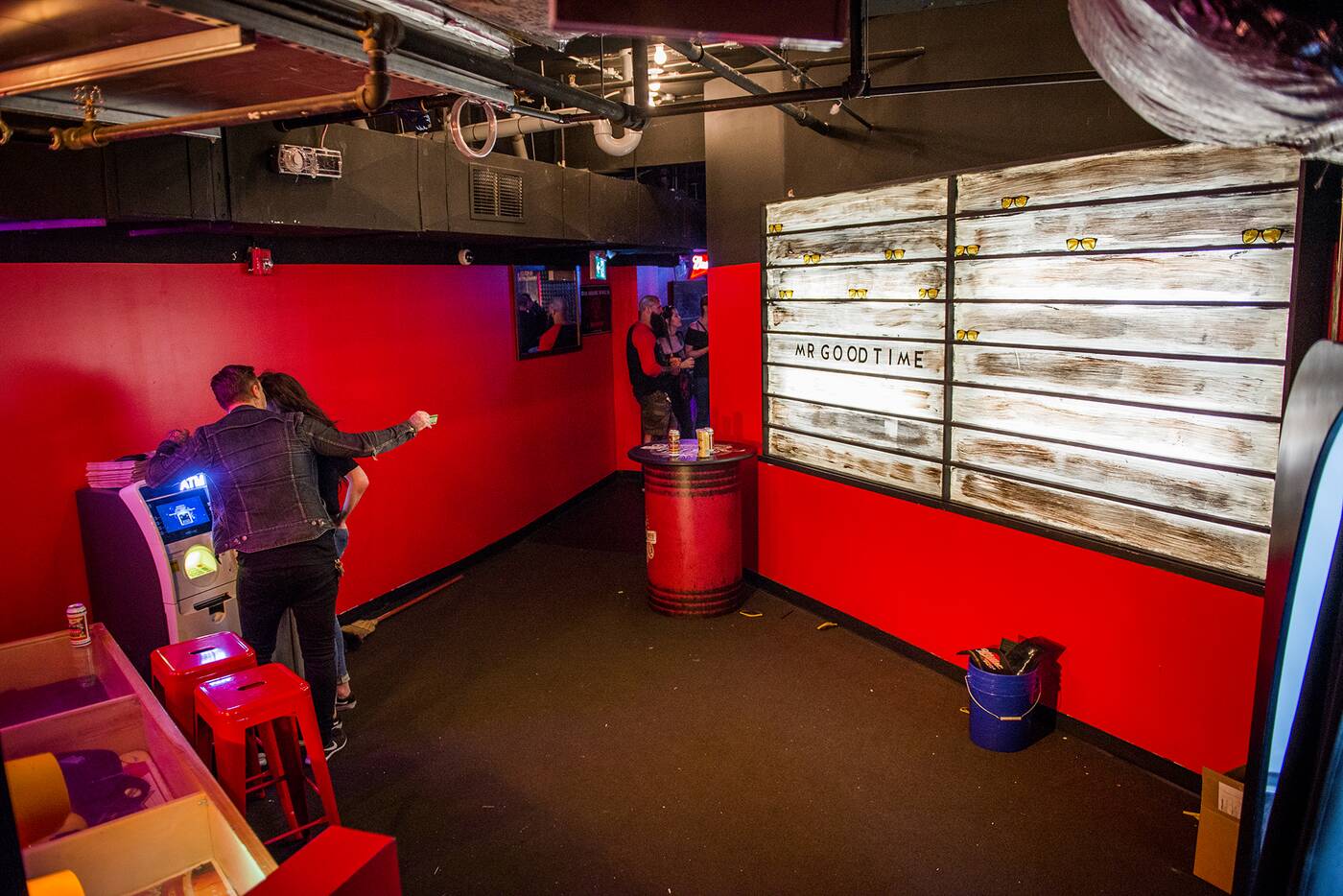 Should fashion inspiration suddenly strike you, grab a free pair of shades from a wall on the way in. 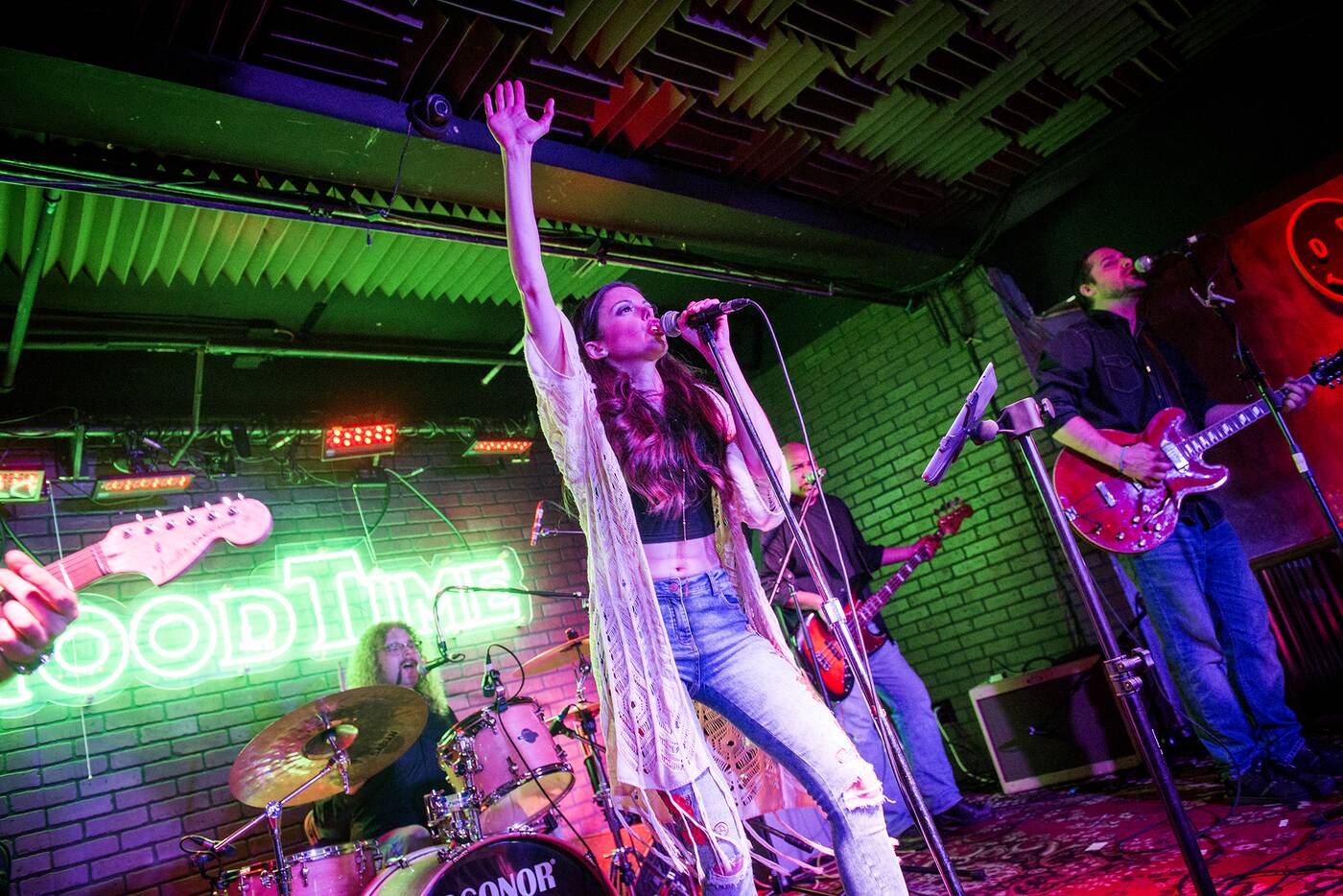 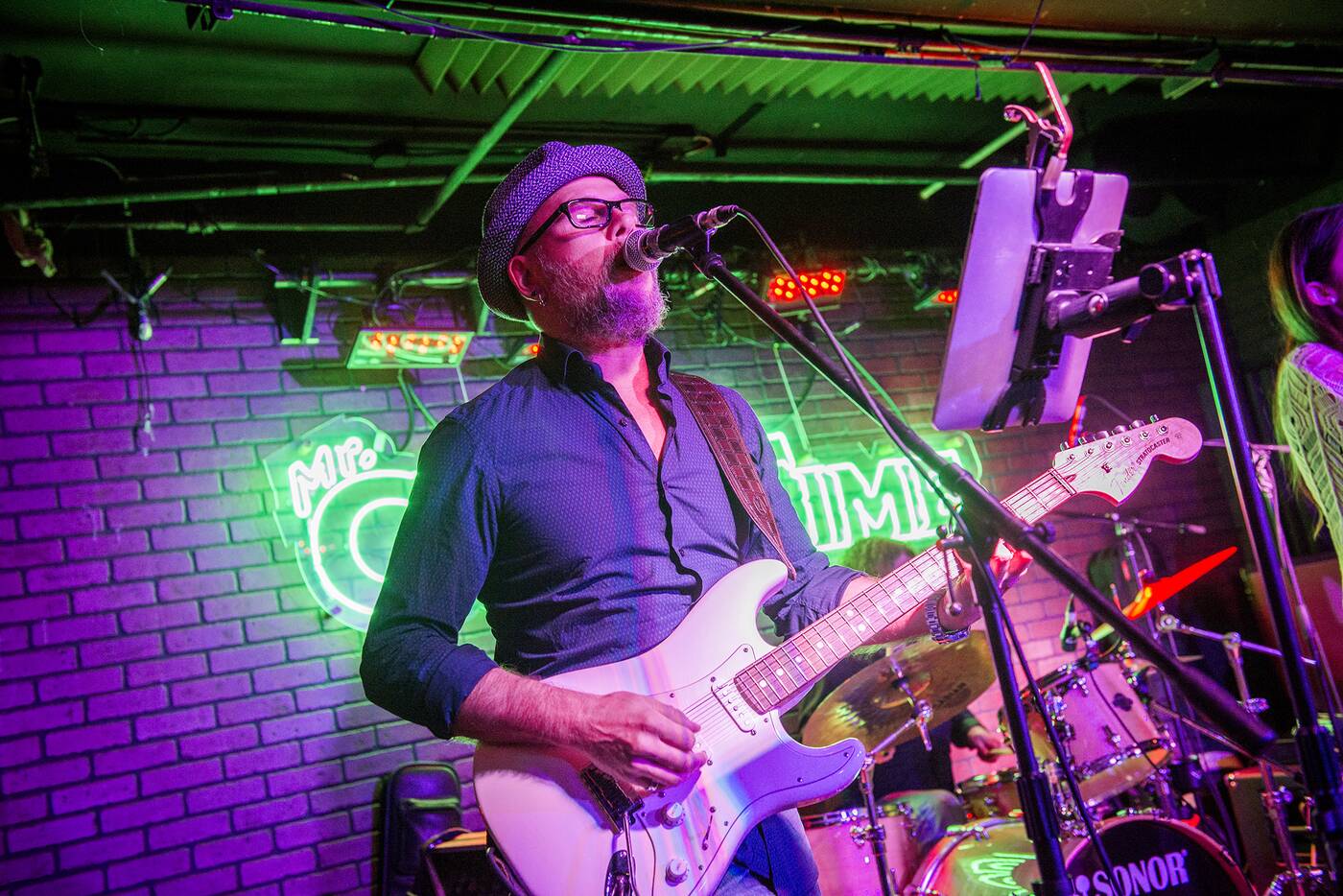 It’s a sort of live karaoke vibe with a female-fronted band of xx playing oldie after oldie (think Sweet Home Alabama, Wagon Wheel and Signed, Sealed Delivered) until it’s practically impossible not to sing along. 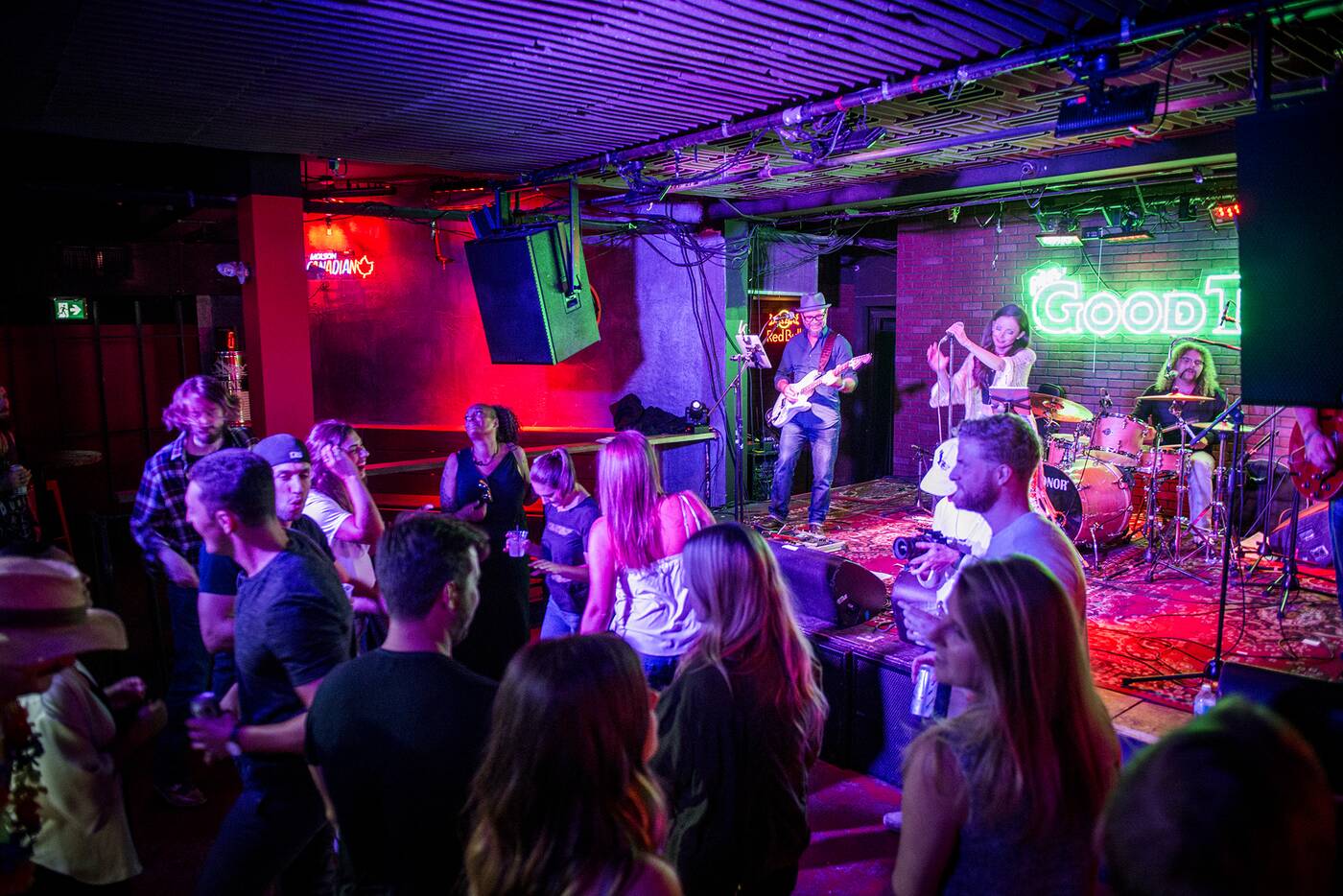 If you’re the kind of person who needs to release the dance beast in you at the end of the night, you won’t be out of place here. 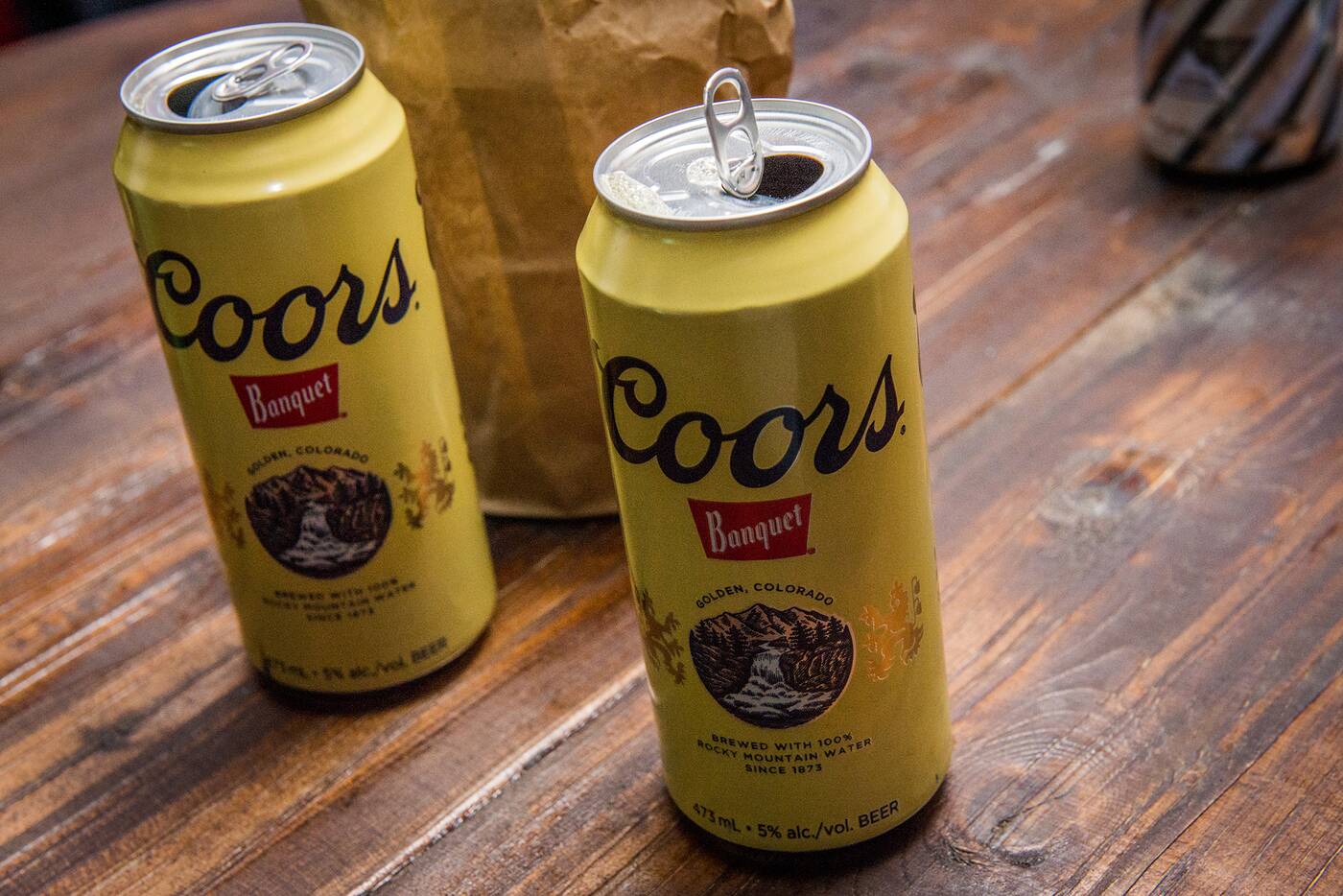 In true dive bar fashion you won’t find any tulip glasses or tasting flights here, just tall boys of straight up brands that average around $6.75. 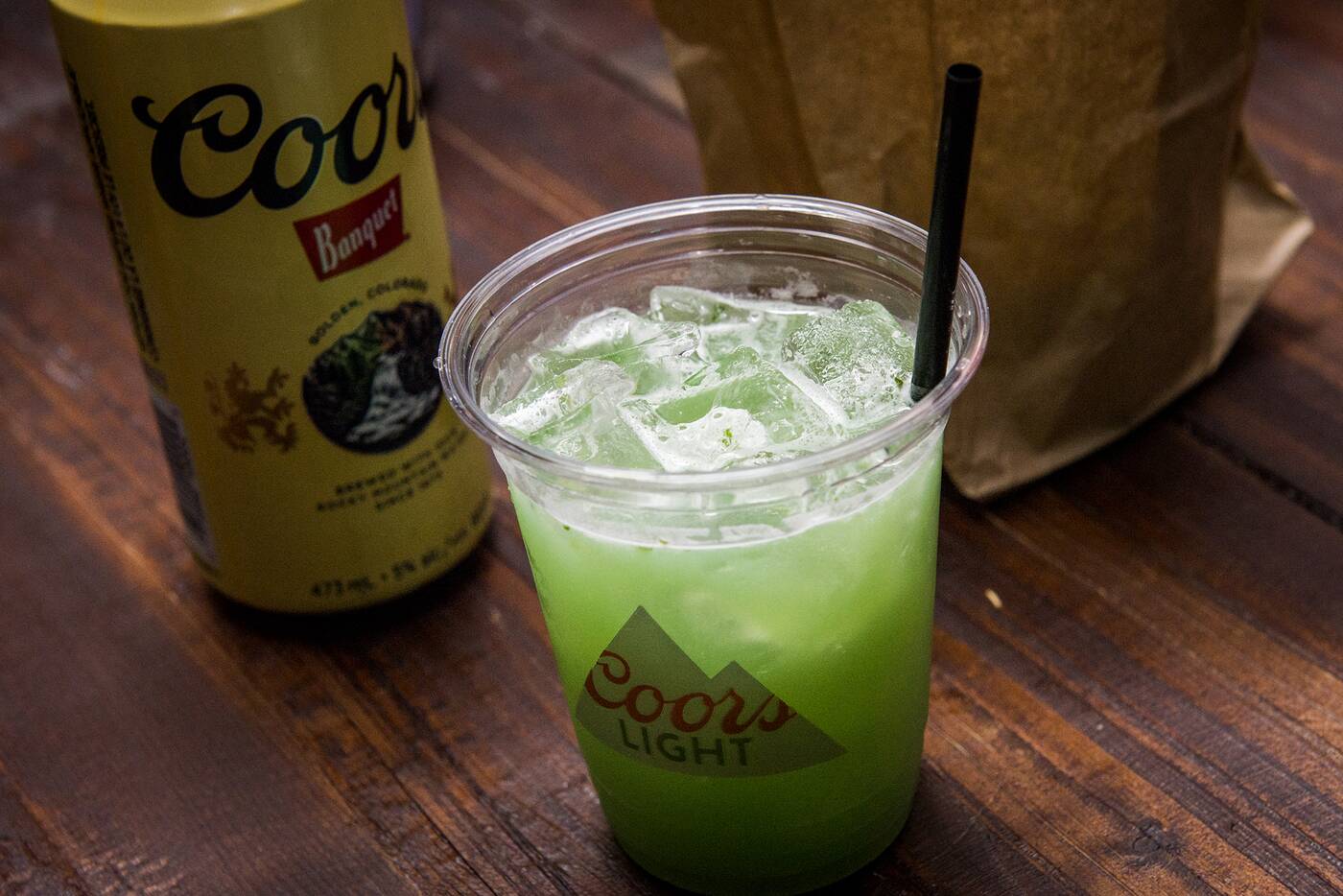 Electric Blue ($8.75) is one of two down and dirty cocktails not on any menu that reflect the bar’s house party meets dive vibe, a potent mix of Malibu, blue curacao, pineapple, lime, lemon, and powerful basil honey on the rocks. 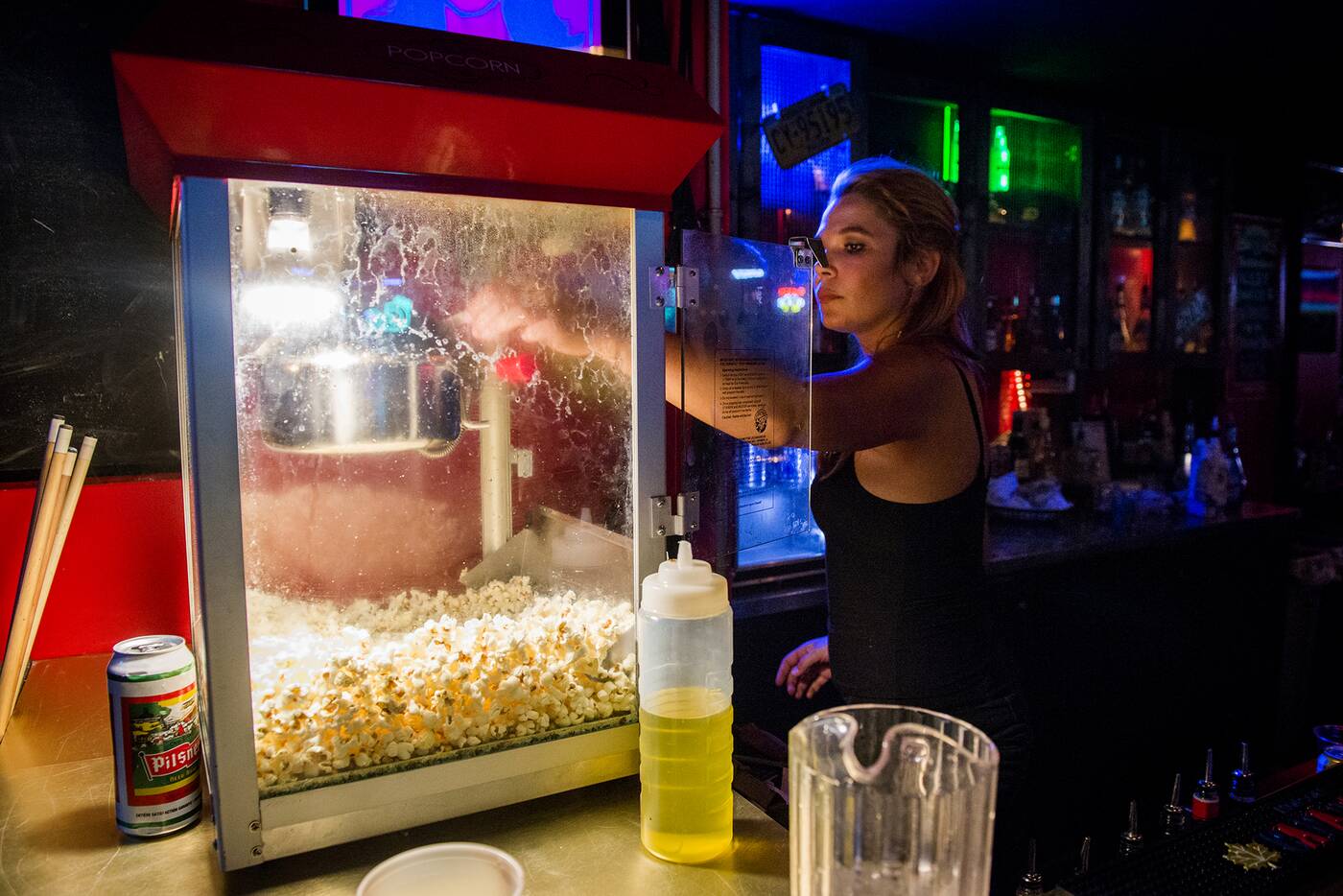 Complimentary popcorn is available in case you need something to soak up all that alcohol. 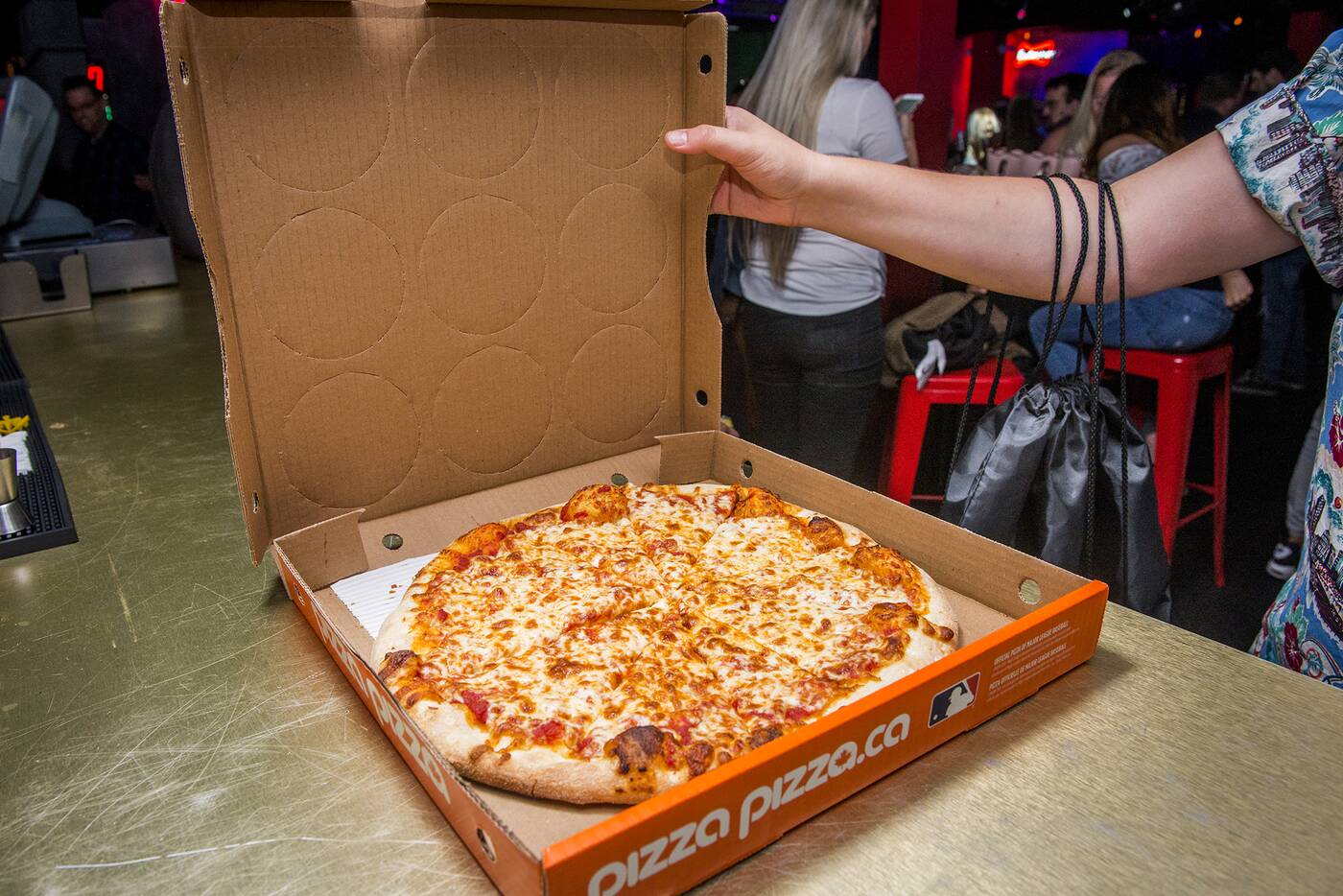 And if you stick around til midnight, there just might be a slice of free pizza in it for you. 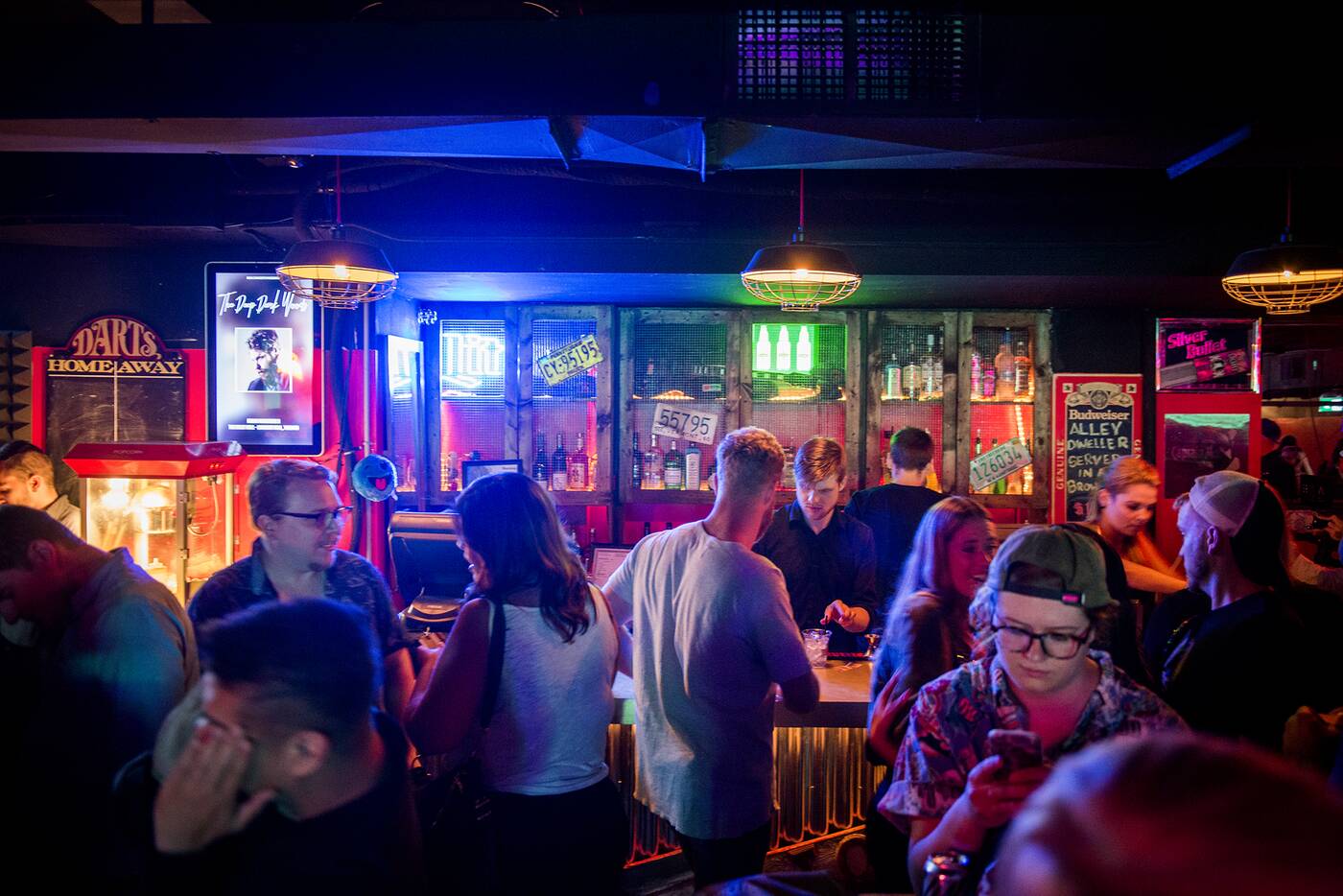 The vibe is meant to be that of an industrial party or surprise show, where everything is quick, dirty and spontaneous.

One thing’s for sure, no one’s afraid to let it all out late at night on the weekend at one more addition to Toronto’s eccentric party scene. 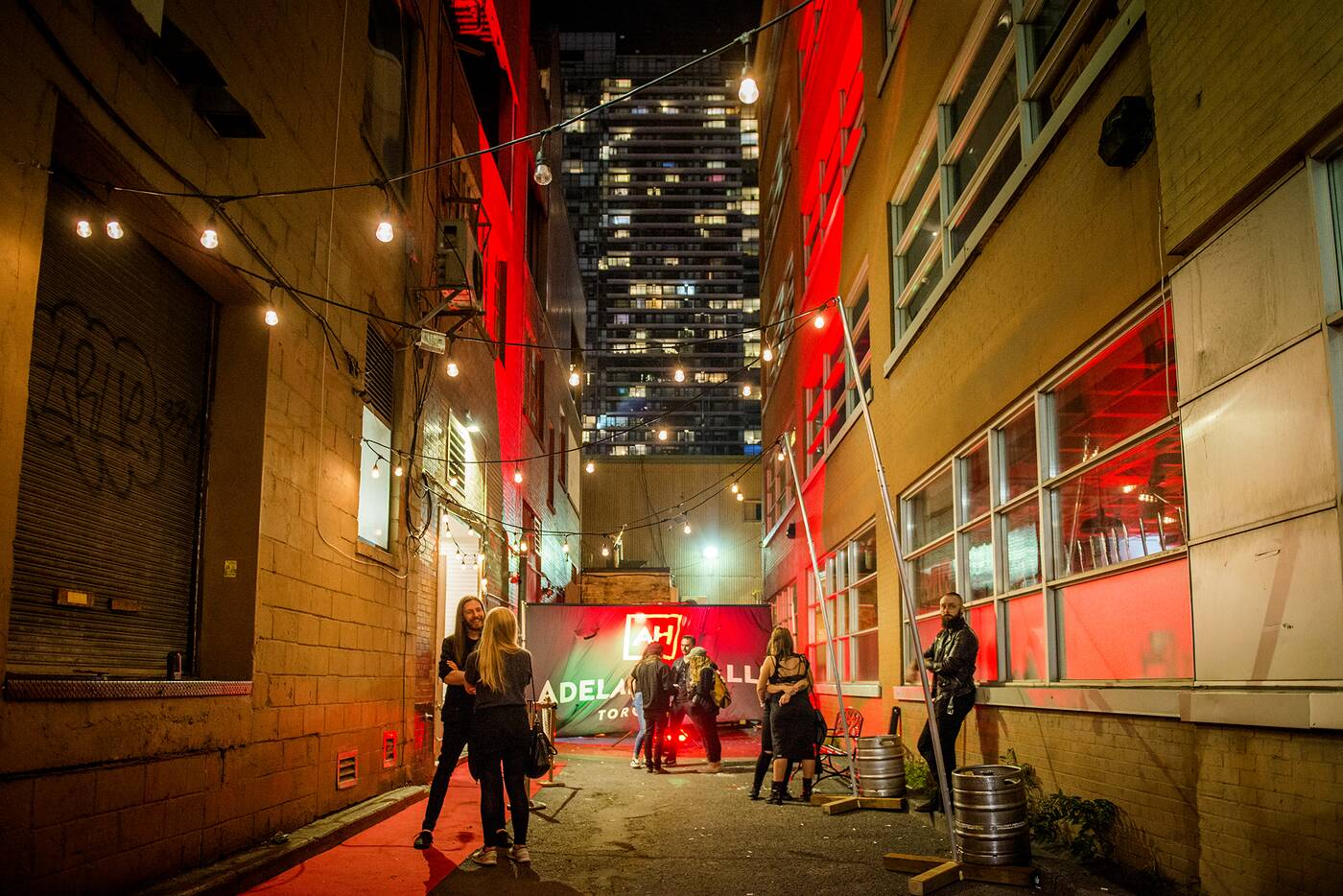