Ruelo Patisserie is not touting the same salted caramel and pistachio macarons you'll find at most French pastry shops in Toronto. No, this patisserie, new to Yonge and Eglinton, is offering its macarons in specialty flavours such as wasabi and grapefruit, balsamic vinegar, and black truffle (the mushroom, that is). While the modest macaron savant can, instead, opt for a classic cassis or vanilla treat, my mind was on wasabi the second I saw it gleaming behind the glass display.

This patisserie, on Erksine Avenue just north of Yonge and Eglinton, is a replica of a sister shop up in Richmond Hill . Jacqueline Lo opened the original Ruelo with her husband, Angus, a few years ago after studying at Le Cordon Bleu in Ottawa and various schools in France and throughout Europe. The concept is premised on classic French pastry-making, with an emphasis on natural, premium ingredients and classic techniques. 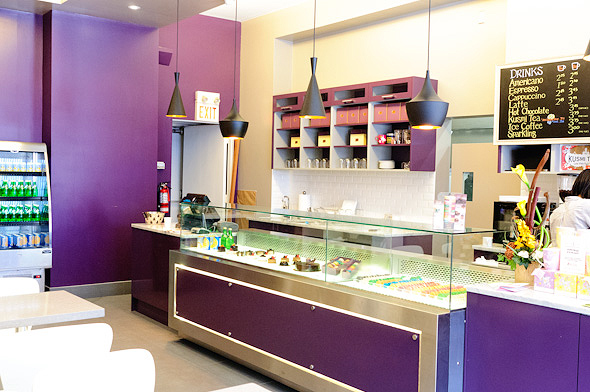 The macarons are undoubtedly Ruelo's main attraction (priced $2.25 to $3.00 each), but the shop also offers croissants and baguettes for the breakfast crowds and specialty cakes for a little indulgence. The mini versions look immaculate as they sit behind the display, crafted in varieties such as nut-free apple caramel, gluten-free caramel apricot, and raspberry dark chocolate mousse.

"We use Valrhona chocolate," Angus says as we take a seat at a table by the plush purple benches. "It's a premium chocolate; many companies source their cocoa from other places, but Valrhona has its own farm. It sees the process through from the seed."

Jacqueline and Angus are also particular about their tea selection, offering only Kusmi brand. We sip glass mugs of orange chocolate as Jacqueline and Angus tell be a bit more of Jacqueline's work. "Sugar flowers, particularily, are her specialty," Angus says, showing me photos of some of her recent wedding work. "Usually I just do them for wedding cakes," Jacqueline adds. 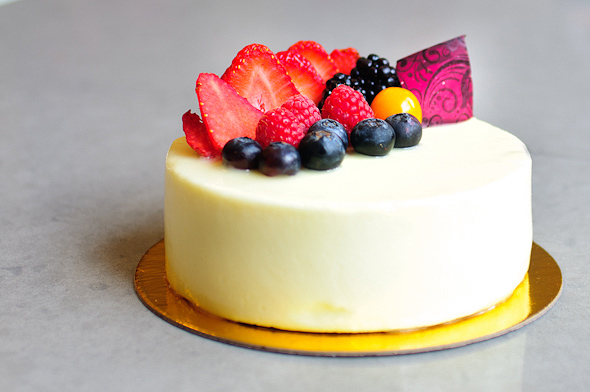 The model cake in the front display does look delicious, but I was keen on sampling the extraordinarily flavoured macarons. The truffle was first — a crisp, perfect shell with a little more filling than I was initially expecting. It tasted authentically "truffle" with a rich mushroom flavour, and oddly enough the mix of sweet and savoury worked. Next was the wasabi grapefruit with its spotted shell and profound kick. It was definitely more "wasabi" than "grapefruit," with a mild punch and tempered sweetness. I wouldn't suggest these flavours for a five-year-old looking for a sweet, but they would definitely appeal to a more refined palette. 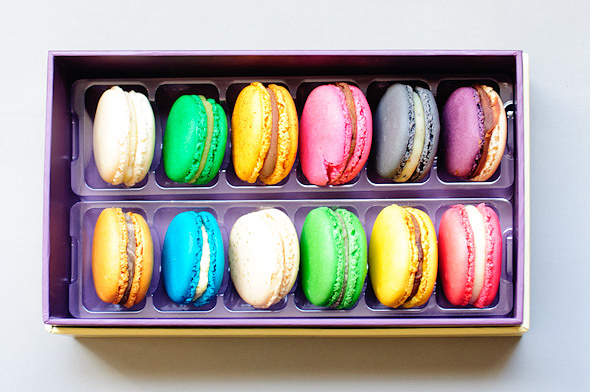 Since opening this new location, most of the Ruelo production has been moved to Yonge and Eglinton, as this kitchen offers a little more space than the one in Richmond Hill. Jacqueline says she will continue to concoct new macaron flavours, while keeping traditional French technique in mind. 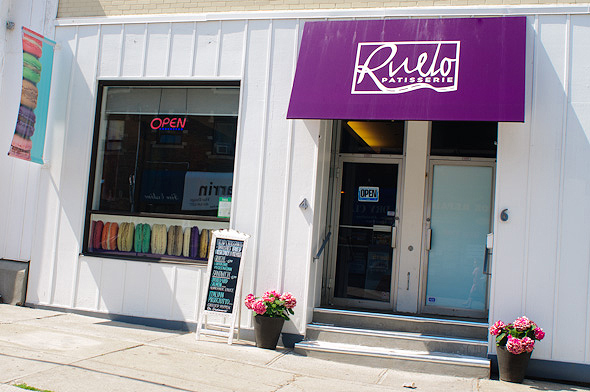