Bloomer's is Toronto's newest addition to an ever-growing crop of bakeries catering to local vegans. Owners Kelly Sprague and Alex Dodd first cultivated their talents at Live Food Bar on Dupont before striking out on their own this summer with a roster of dairy- and egg-free (and, sometimes, gluten-free) recipes.

After about a year of searching for a location, the couple's bake shop and cafe has taken root in a former Ethiopian restaurant just east of Ossington on Bloor St. Despite the industrial garage door-style window that opens to the street, letting in the sights and sounds of the city, the bakery is quite homey inside. 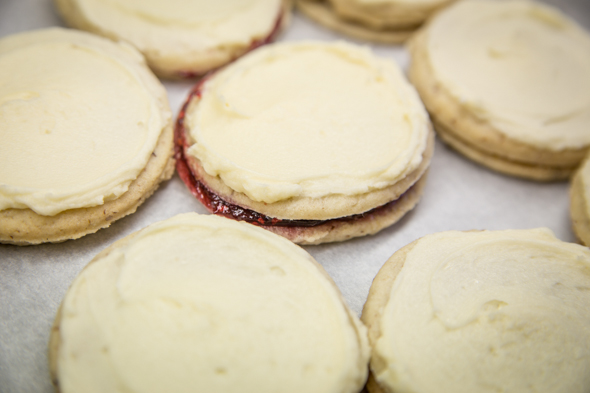 Not homey in a contrived, "country-style" sort of way, mind, but more like you're snacking on muffins and coffee in a friend's kitchen. The place is a charming mix of mismatched wooden tables and chairs, mixed-up plates and mugs, and a retro colour scheme courtesy of an electric-blue wall and bright orange banquettes. 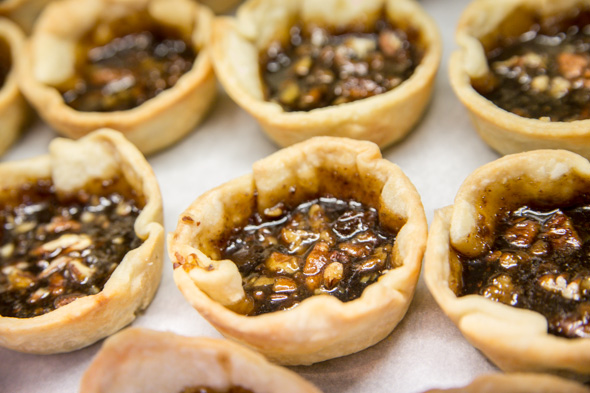 Fittingly, as it turns out, a number of the recipes are beloved family hand-me-downs. "A lot of the recipes are ones that used to be my grandma's or my mom's - same with Alex's mom, and then we just made them vegan," Sprague says. The lineup of 10-or-so treats rotates daily, with muffins, cookies, tarts, bagels and cakes all on offer. 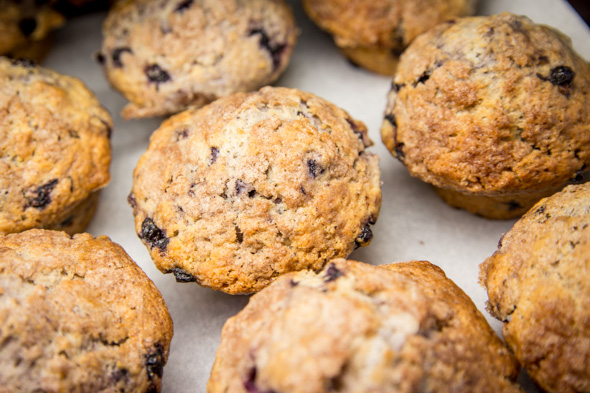 One of Sprague and Dodd's favourite treats is the zucchini chocolate chip muffin ($3), a reworked recipe from Dodd's mother that instantaneously sold out the first time they put them in the case. They're incredibly moist, dense and falling apart, studded with melty dark chocolate chips. Gluten-eaters can try the blueberry version, which boasts underlying cinnamon and lemon flavours and a nice, fluffy texture. 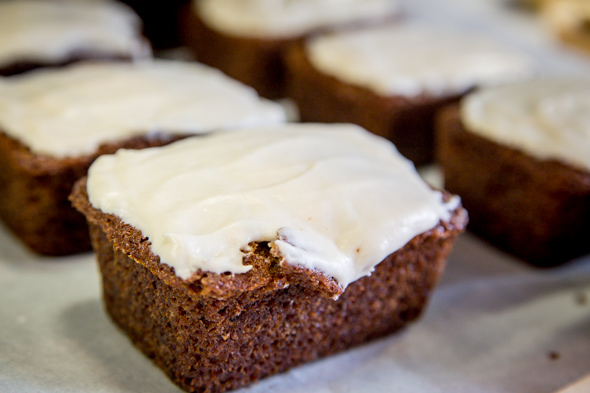 Same goes with the carrot cake, another gluten-free fave; doled out in individual mini-loaves ($5) smeared with a whipped icing, it's a decadent snack completely indistinguishable from its gluten-and-dairy-imbued cousins. 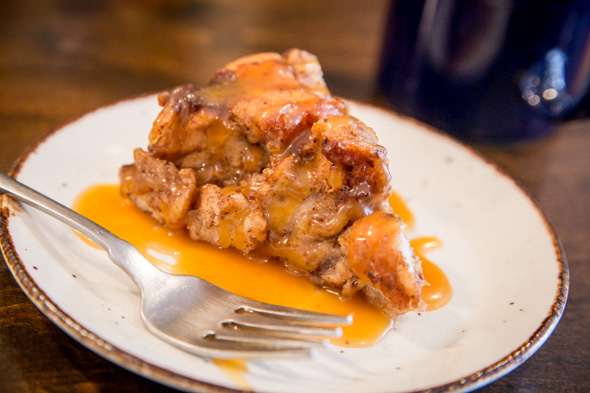 Their coconut donut holes ($2), each about the size of a couple of Timbits, are also popular, but if you miss them that day, you may be able to grab a slice of their donut bread pudding ($3.50), a chewy mass of cinnamon-y dough that comes smothered in vegan caramel. 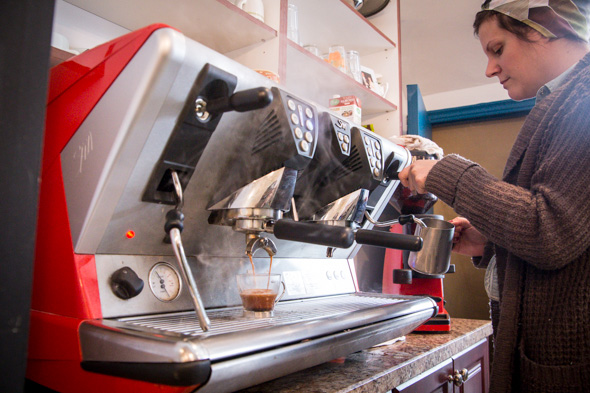 To wash it all down, there's brewed coffee ($2-$2.75) and espresso drinks made with Mountain View beans. Lattes, served in mismatched coffee mugs, are $3.75. (Sorry, dairy fiends; soy or almond milk only, but the toasty flavour of their almond milk latte more than makes up for the lactose.) There's also a selection of juices, flavoured kombucha, herbal teas, and Blue Sky soda, all under $4. 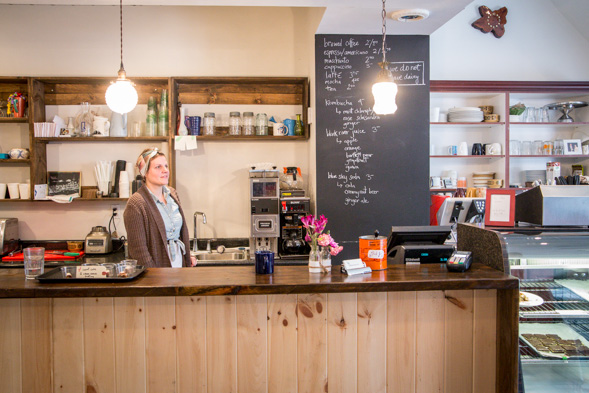 Sprague mentions they've got big plans to expand the bakery into a full-service restaurant. The duo's been working on an all-vegan menu of appetizers, salads, rice bowls, sandwiches, and entrees; the plan is to make as many things as they can in-house, including their own cheeses for a vegan mac and cheese, "We have a few things we've tested out with friends and family, using - again - some family recipes. Like barbecue sauce that they use on meat, we use on tempeh for tempeh wings.

"It's going to be a mix of stuff that's healthy, but also taking advantage of the deep fryer," she laughs. "We want it to be someplace where everybody can get something that they want." 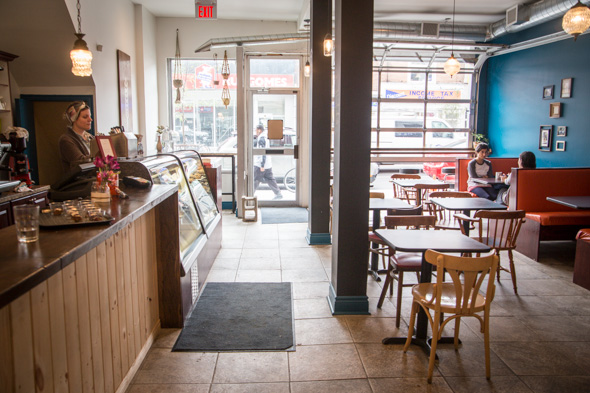 In addition, they're in the process of getting approved for a liquor license, and might even expand past their current 6pm closing time to offer some late-night deals for hungry bar patrons. You could probably say they've got a lot more blooming to do. 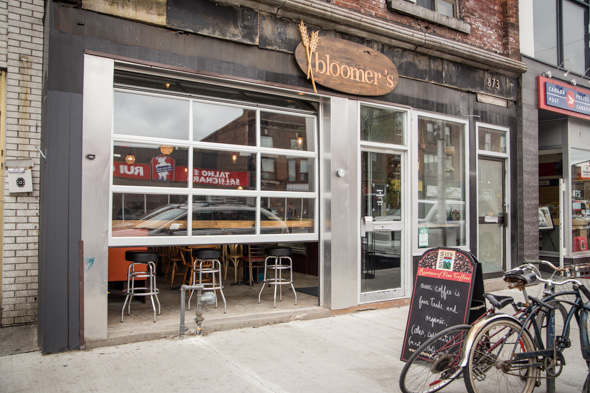