I'd heard of Altitude bakery, but didn't know it was in Leslieville until we were walking past it. It was a rainy day. There were only few people on the street and many of the stores were closed, including the one we had originally come to check out. We walked to Queen St. from the subway because we missed the bus and the next one wasn't due for a half hour. By the time we made it to Leslieville, we were both in pretty bad moods because our plans had been thwarted and we were hungry and rained on. I wanted to blame public transit. Well, I didn't want to blame public transit, but I didn't want to blame myself. 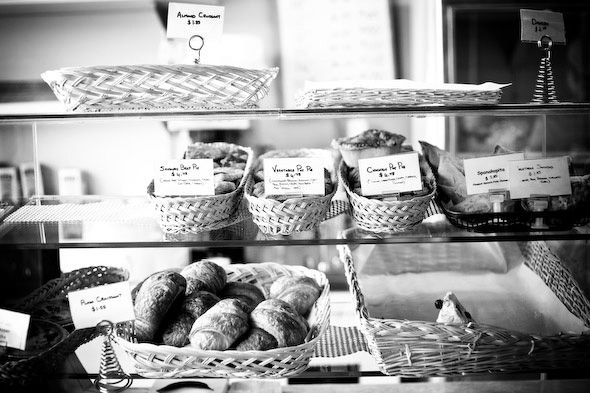 Then we remembered Altitude and backtracked to the tiny bakery - which had a lot riding on it. 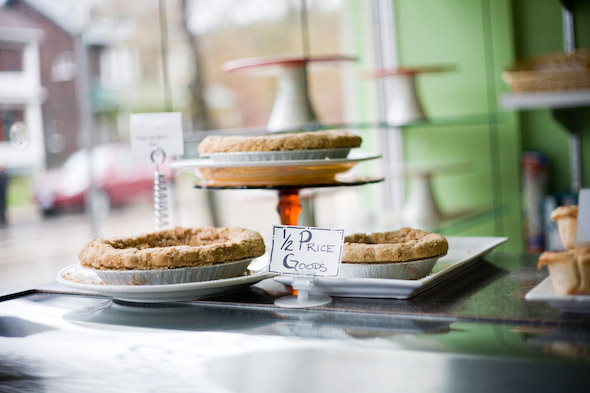 There's no room to eat inside Altitude (or take photos) so we made up a box (and bag) of baked goods to take home with us. Along with plenty of cakes, tarts, cookies and croissants, they also offer bagels from Fidalgo and loaves of bread from Dough Head Bakery (I've never heard of this bakery, but it sounds good on account of the name). They also bake some lunch items in-house like mini spanokopitas and samosas. 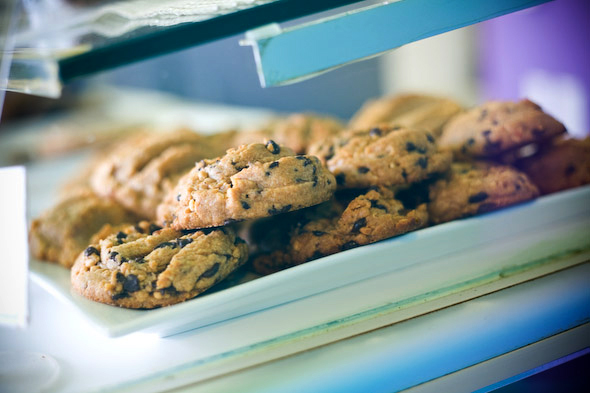 But we wanted sweets. We were generous (to ourselves) with three tarts, two cookies, a rum ball and a big chocolate cupcake with pearly sprinkles in pastel colours sprinkled on top. This shiny thing ($2.50) caught Alyssa's eye as soon as we stepped foot inside and it was an event when she finally consumed it a day later. "I am going to eat the cupcake now," she announced. 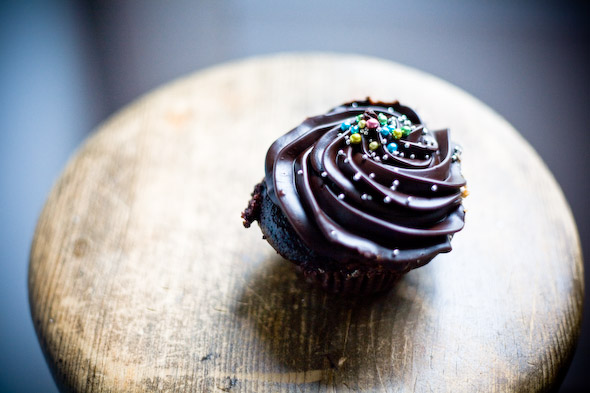 I don't usually like cupcakes because they're too light and fluffy, but Alyssa's cupcake (of which I managed a bite) was so dense and moist that it was still tasted fresh a day later. The icing was really thick and dark chocolatey. 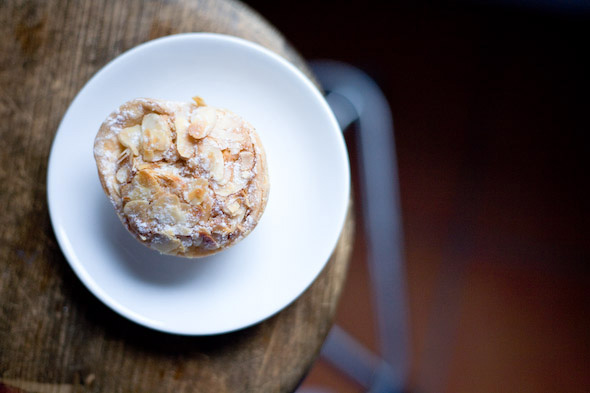 Before I had eaten a single sweet out of the box, a guest in my home tried to steal the almondine tart ($1.65). Luckily, I caught him and managed a few bites before it was gone. This was my introduction to Altitude tarts, and it was great. The almondine was light, with a fruity bottom layer and a sweet, almond filling like marzipan. The sour cream apple tart ($1.65) was smooth and fresh. All the tarts had a nice crust, not flakey, but thick and buttery. 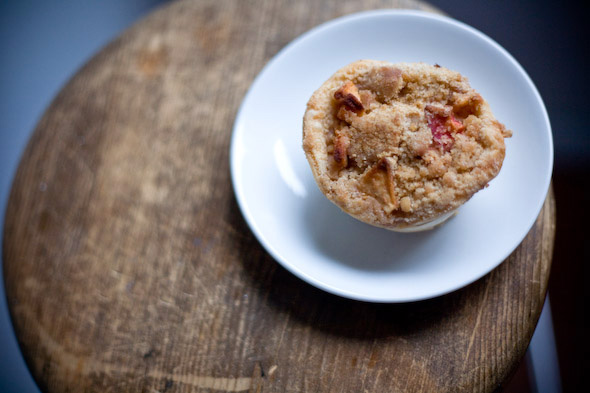 I particularly enjoyed the butter tart ($1.65). In retrospect, I suspect there was chocolate in it. Luckily, this didn't occur to me until after my friend who hates chocolate (but loves shortbread) had happily enjoyed a piece (aside from picking all the raisins out... she really prefers shortbread). 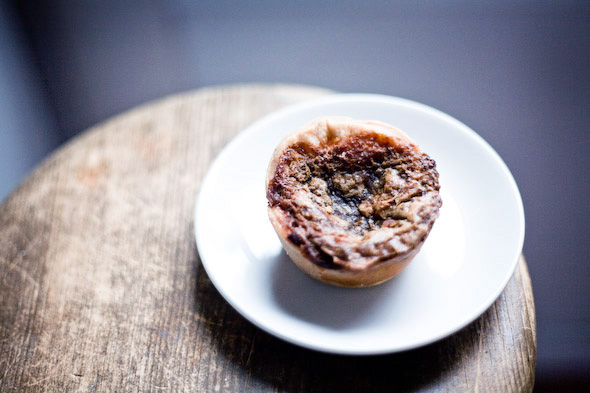 And what a great rum ball I had ($0.75)! When I cut it into pieces, it filled the room with the smell of booze. I appreciate this. Too many rum balls don't taste like rum. 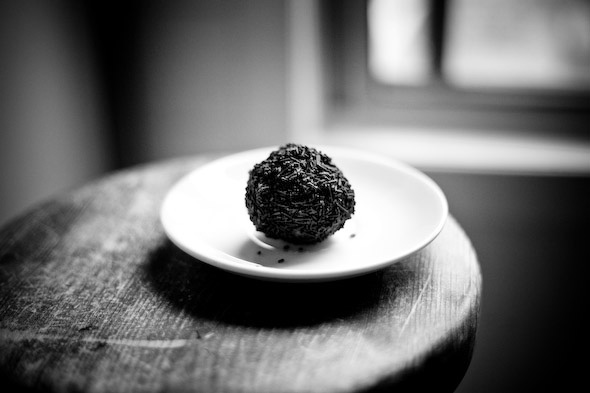 I'd eaten the French Kiss triple chocolate brownie cookie ($1.25) on the way home from Altitude on the streetcar. It was definitely triple. In the short time it took me to eat it, that cookie filled me with so much chocolate that I fully regained my good mood. It was as though I'd never missed the bus or been rained on, and I was no longer upset with the 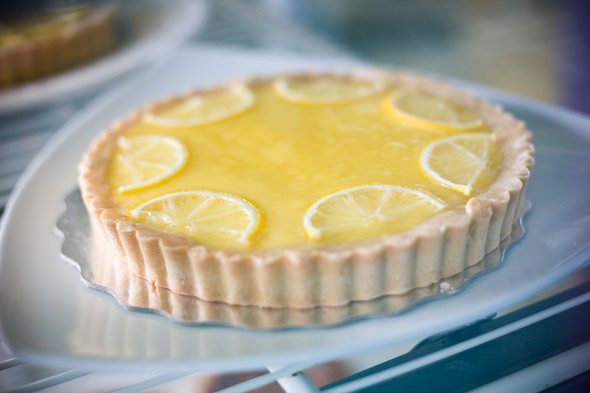 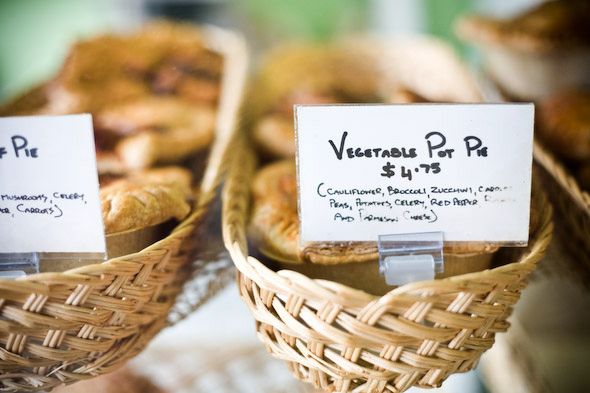 . The streetcar came in less than a minute, and was speeding across Queen St. in a timely manner.