The Toronto Outdoor Art Fair—the longest-running of its kind in the city—needs to do some serious crowd control this year.

Now in its 60th year, it's one of the largest outdoor art fairs in Canada. Before COVID-19, the event took over Nathan Philips Square annually with 350 artists, drawing around 130,000 visitors who spent, on average, more than $2 million on art over one summer weekend.

"Everyone is kind of hungry for activity, there's no question about it," says Azrahimi. "We're playing a little bit of a waiting game but also in close contact with the city." 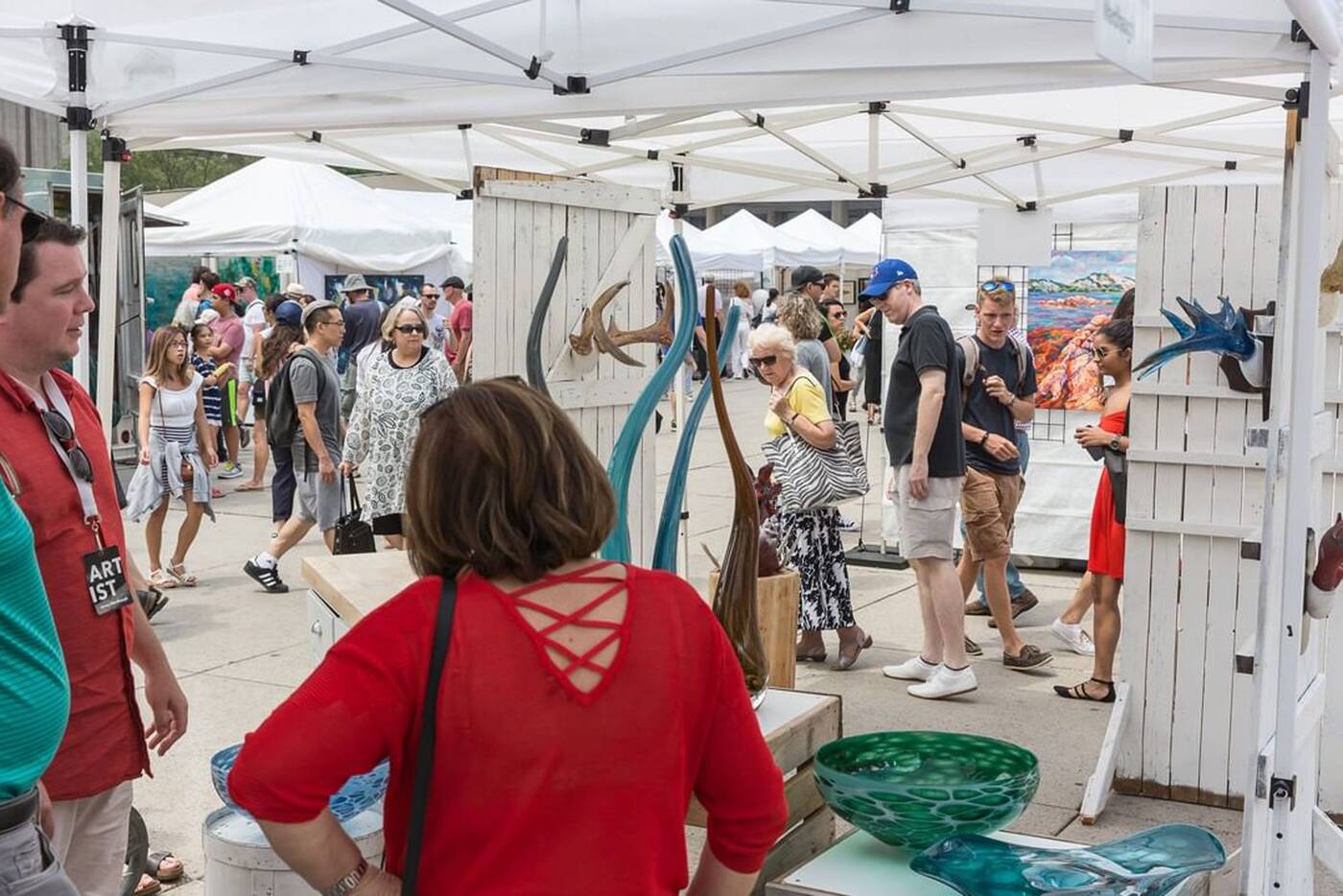 This year's socially-distanced art fair will have to look drastically different than years past. Photo viaToronto Outdoor Art Fair.

Given that Toronto is still in lockdown, the status of public events in the city is still unclear. Permits have yet to be issued and gathering limits are still up in the air.

But given the stats of years past, it's clear the Toronto Outdoor Art Fair will have to operate differently to manage the crowds.

Last year's event was entirely digital. Given the 6-week turnaround to pivot to a virtual set up, it was a success—so much so that Azrahimi says it'll be a key component of the fair moving forward.

The 10-day online event saw participating artists manage to sell over 600 pieces of work. Virtual studio tours and interviews with artists from around the country were added to the itinerary. There were over 800,000 page views, and for the first time, art collectors logged on to the platform from all over the world, not just Canada.

But this year, TOAF is hoping to come back IRL, not just URL. Azrahimi says they're looking to Toronto's farmers market model as inspiration for summer 2021.

"The fact that farmers markets opened and we could go there and we still had a sense of interaction with the community... It was different, but it was there." 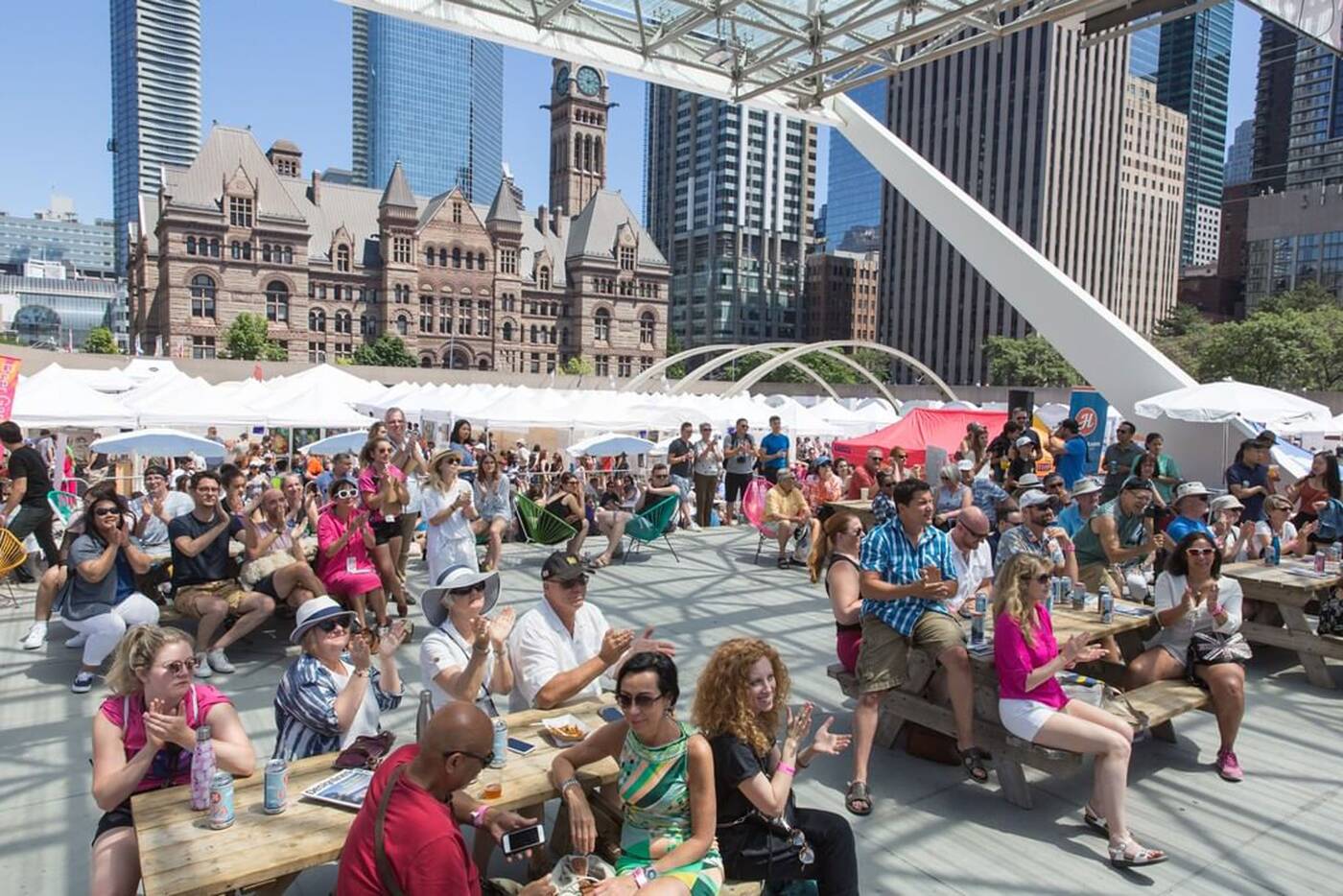 Last year's TOAF moved exclusively online. The 2021 event hopes to be a hybrid of both virtual and in-person events. Photo via Toronto Outdoor Art Fair.

The Toronto Outdoor Art Fair could move forward in a couple different ways this year.

If gathering limits are capped around 100 to 200 people, the event could still take place at Nathan Phillips Square, with controlled entries and exits, and 50 to 100 artists showcasing in socially-distanced clusters.

"They can see the artwork in flesh. The touching is not there, but still there's the closer connection than seeing something online," says Azrahimi. "It's a small step back into the direction of how we used to do things."

Alternatively, TOAF may split into pockets at other outdoor locations around the city with even smaller capacities. Neither plan can be confirmed until the City releases its next round of guidelines for the summer.

"If it can't be there, the online [platform] is still going to be more crucial than last year," Azrahimi says. "This is the livelihood of our artists. It's hard but we managed to do it and it was great."

The online component of the 2021 Toronto Outdoor Art Fair is confirmed to take place from July 2 to 11. The outdoor component, if approved, will happen during the last three days of the fair. TOAF is currently accepting applications for its artist roster.