Former teacher Chris Higgins is calling on the City of Toronto to turn the underside of Dundas Bridge into a communal work of inclusive graffiti art.

The idea came to him on one of his many sojurns down by the Humber River. He told blogTO he's always been taken by the cathedral-like columns of the bridge and saw how much potential they had.

"If you look under the Dundas Bridge it's a blank canvas," he said. 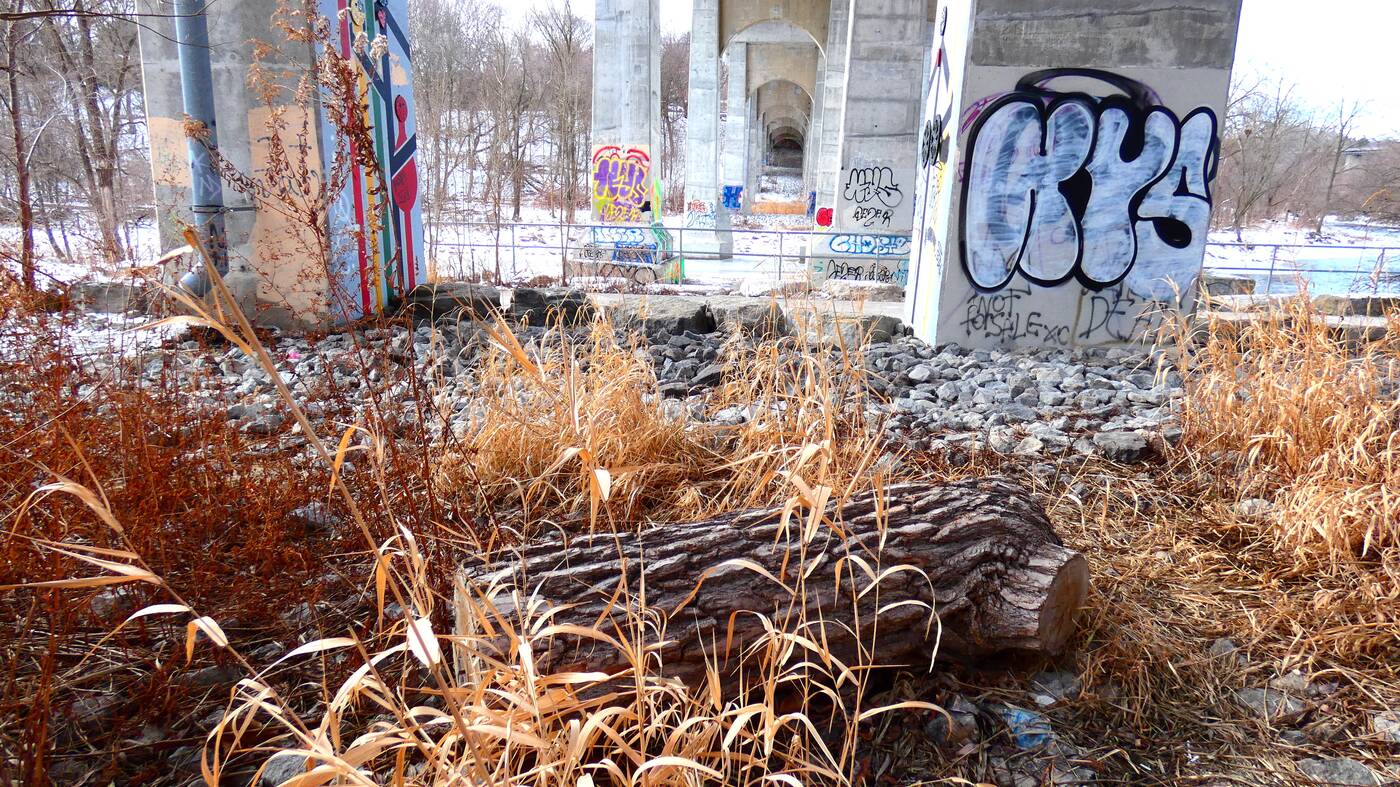 And it's not only Higgins who saw the potential of the space — graffiti artists saw its potential too. Mostly under the cover of darkness, artists have been putting up their work.

Unfortunately, as Higgins told blogTO, a lot of the art is becoming completely decimated with tagging.

"There's a fine line between art and could be perceived as vandalism," he said.

But as Higgins points out, he's just one person with one opinion, so he took to Facebook to see what other people thought of the graffiti that's painted all over the underside of the Dundas Bridge. 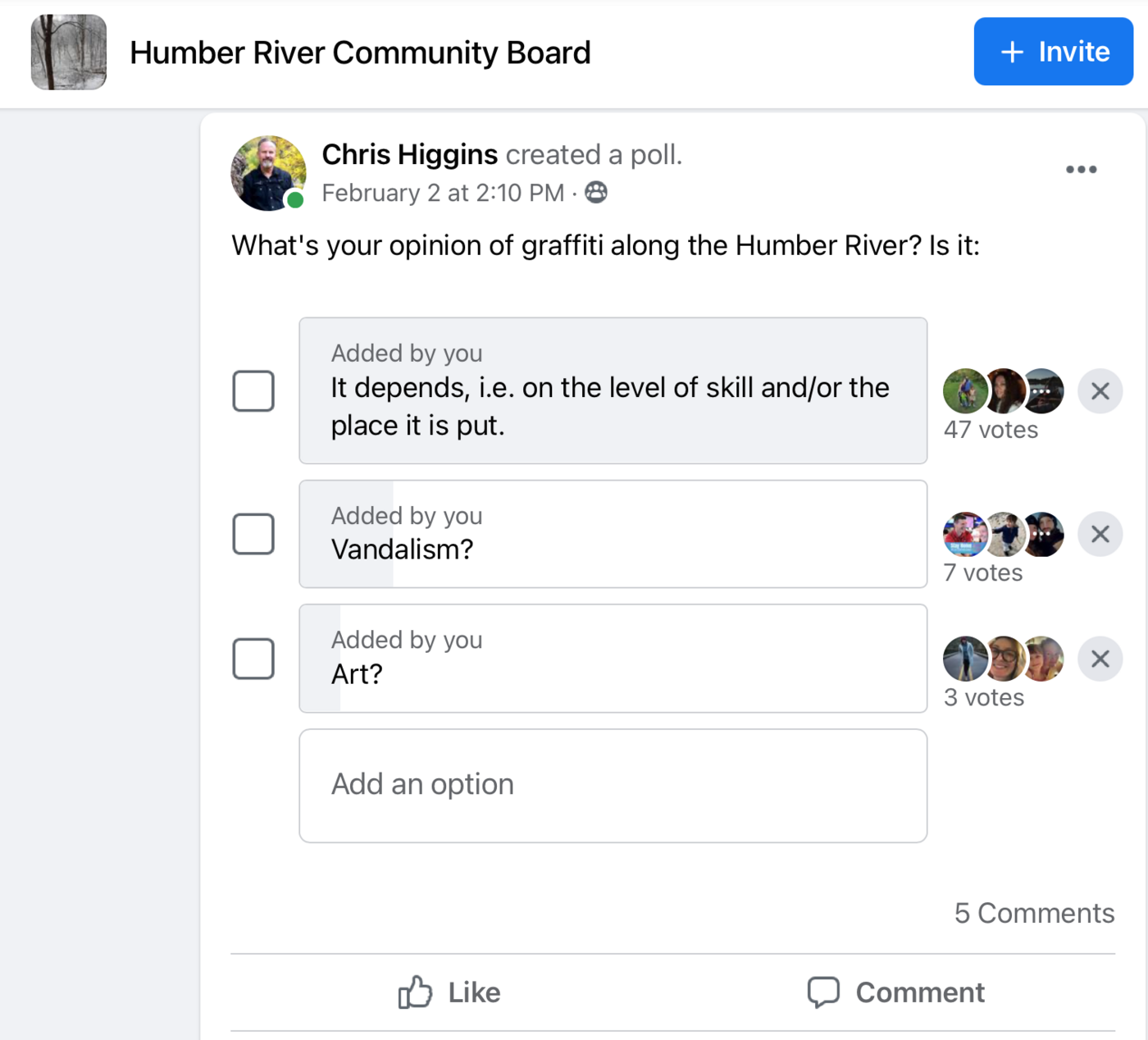 He posted polls on both the Humber River Community Board and Toronto Graffiti and the response was overwhelming. He found that the majority of people are all for graffiti art under the bridge — emphasis on the art part. 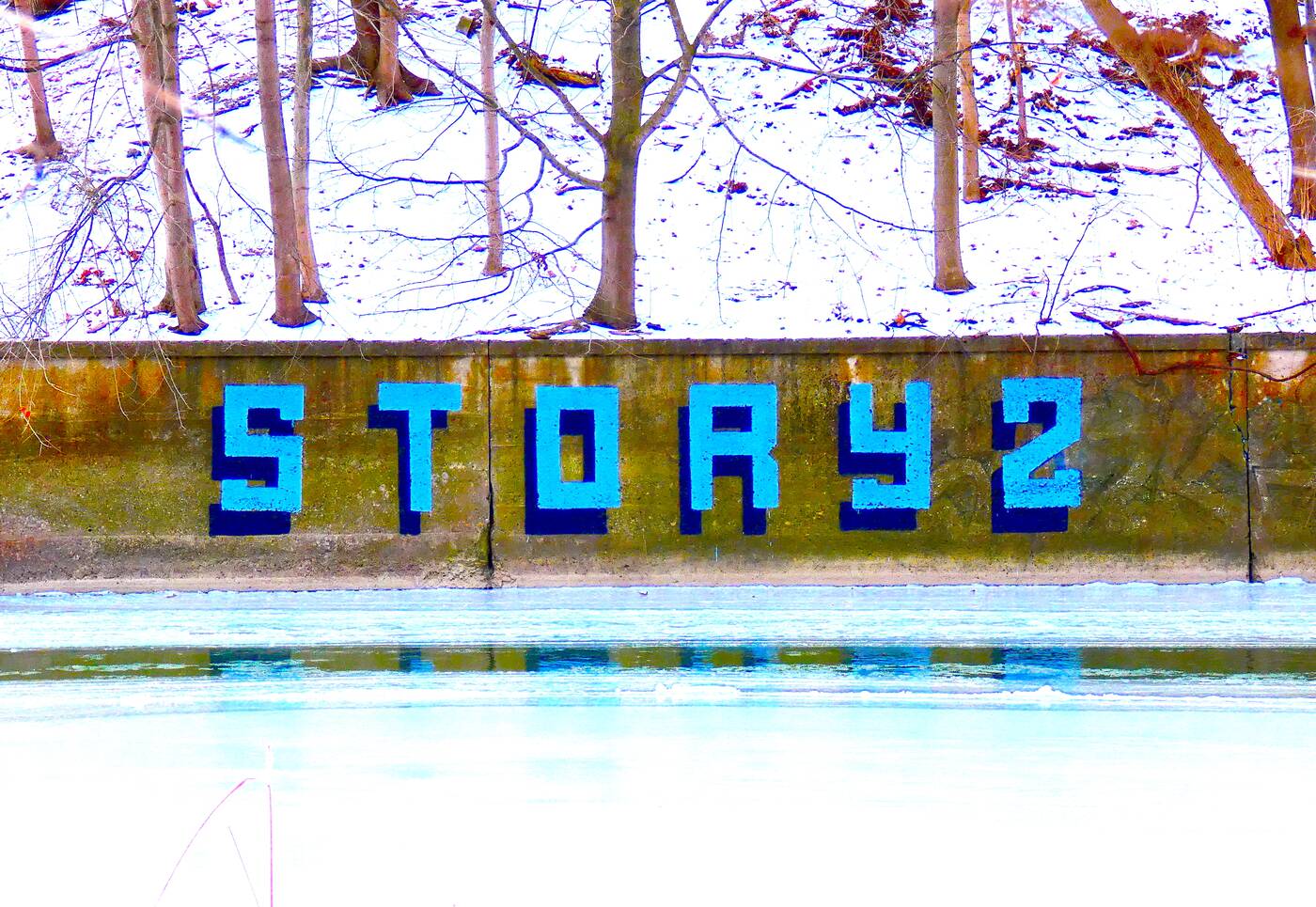 Storyz graffitied on a wall beside Humber River.

The poll got Higgins thinking that while the graffiti on the walls is a subject for reflection and graffiti art is definitely an art form, a lot of the tagging doesn't represent a collective sense of the community.

Now, Higgins wants to create a mural of sorts that reflects the history of the area as well as stories of the community at large. 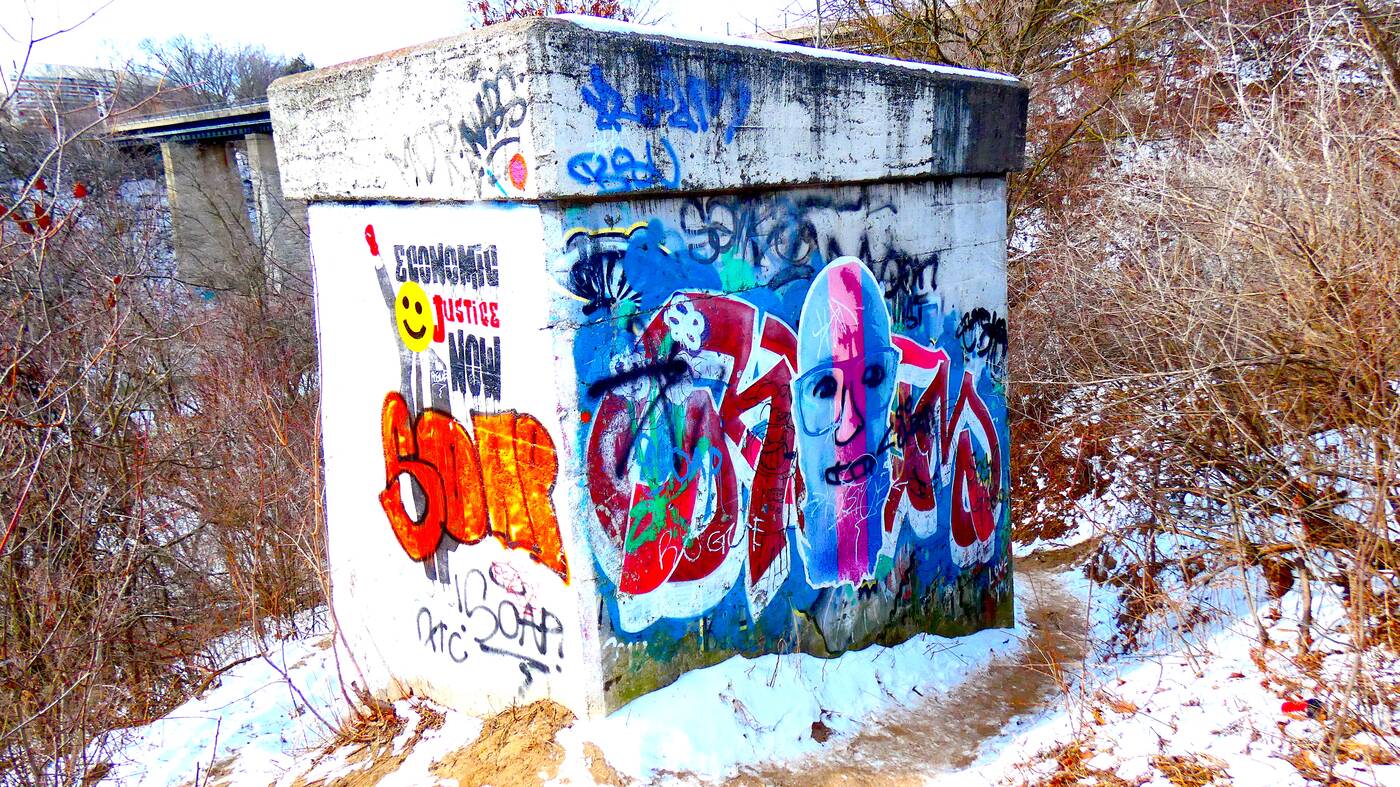 "What I'd really love to see is a collective project that's something that has input from all sides. Residents, young people, aspiring artists, and diverse groups, starting with Indigenous people," he said.

Higgins is now trying to get the project off the ground and in turn make the neighbourhood more beautiful.

"I encourage our leaders to put our community and artists to work. Give them this space, funding, time and permission to create something beautiful here, something that displays the stories, dreams and aspirations of all Torontonians," he wrote in the petition he posted on Change.org on Thursday.

"If we were to team up local residents and artists, it could be a win-win for pedestrians, cyclists, tourists, art lovers and historians who want to get out and enjoy the city." 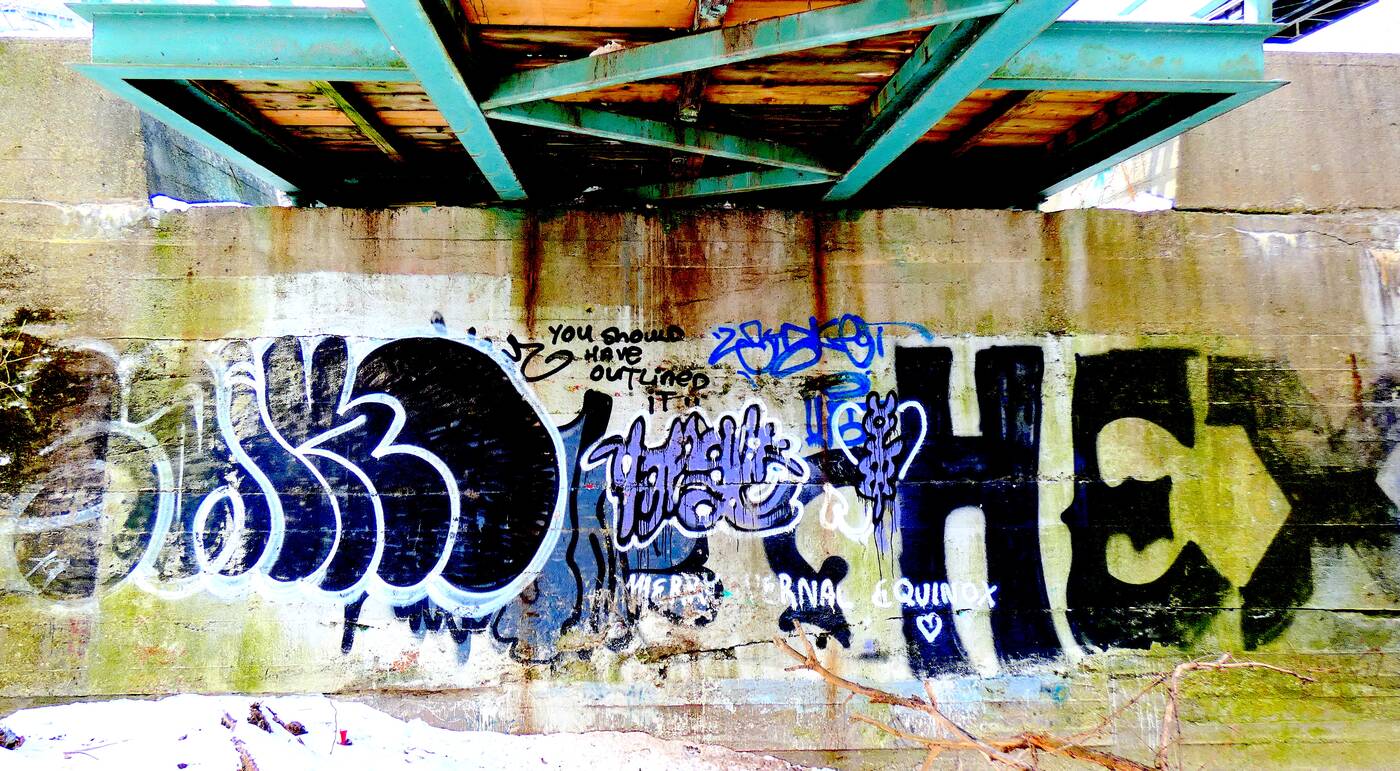 Graffiti pictured under a bridge.

He also told blogTO he's contacted some influential members of the Humber River community like Sarah Doucette and former Toronto Mayor David Miller in hopes of getting the ball rolling.

"Graffiti art is a legitimate art form," Higgins said. "[The artists] should be doing something not under the cover of darkness but born in the light."