The best and worst of Nuit Blanche 2017 in Toronto

Nuit Blanche is in the books for another year, and it's time now to dwell upon what worked and what didn't about the 2017 edition of the event in Toronto.

There were some major changes this year that go beyond the continued lack of a major corporate sponsor since Scotiabank's departure following the 2015 event. The festival might have been smaller, but it was the most scrappy it's ever been. That spirit might be a good thing.

Most notably, this was the year that Nuit Blanche became far more socially conscious, delving headfirst into themes of occupation, protest, and the transgressive nature of artistic production.

This transition might have seemed sudden to longtime attendees, but to remain relevant for the long term, it was a necessary evolution. Still, not everything was great about this year's event, so let's mark the good and bad in hopes of inspiring improvement.

Here are my picks for the best and worst of Nuit Blanche 2017. 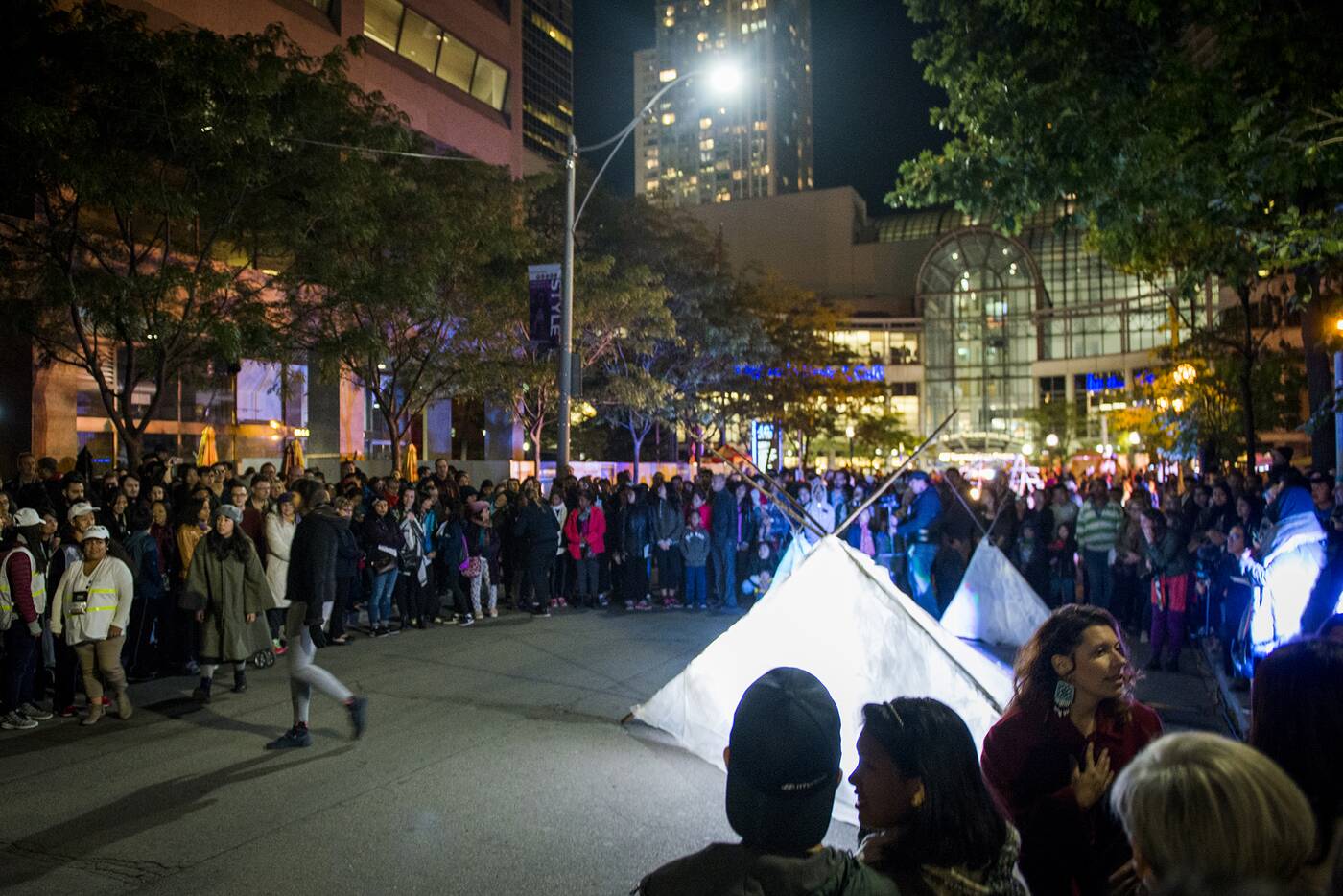 This year's Nuit Blanche finally put a spotlight on indigenous artists, devoting a key section to installations that explored the contested nature of the land on which the festival takes place and the resilience organic to the lived experience of indigenous peoples in Toronto and beyond. 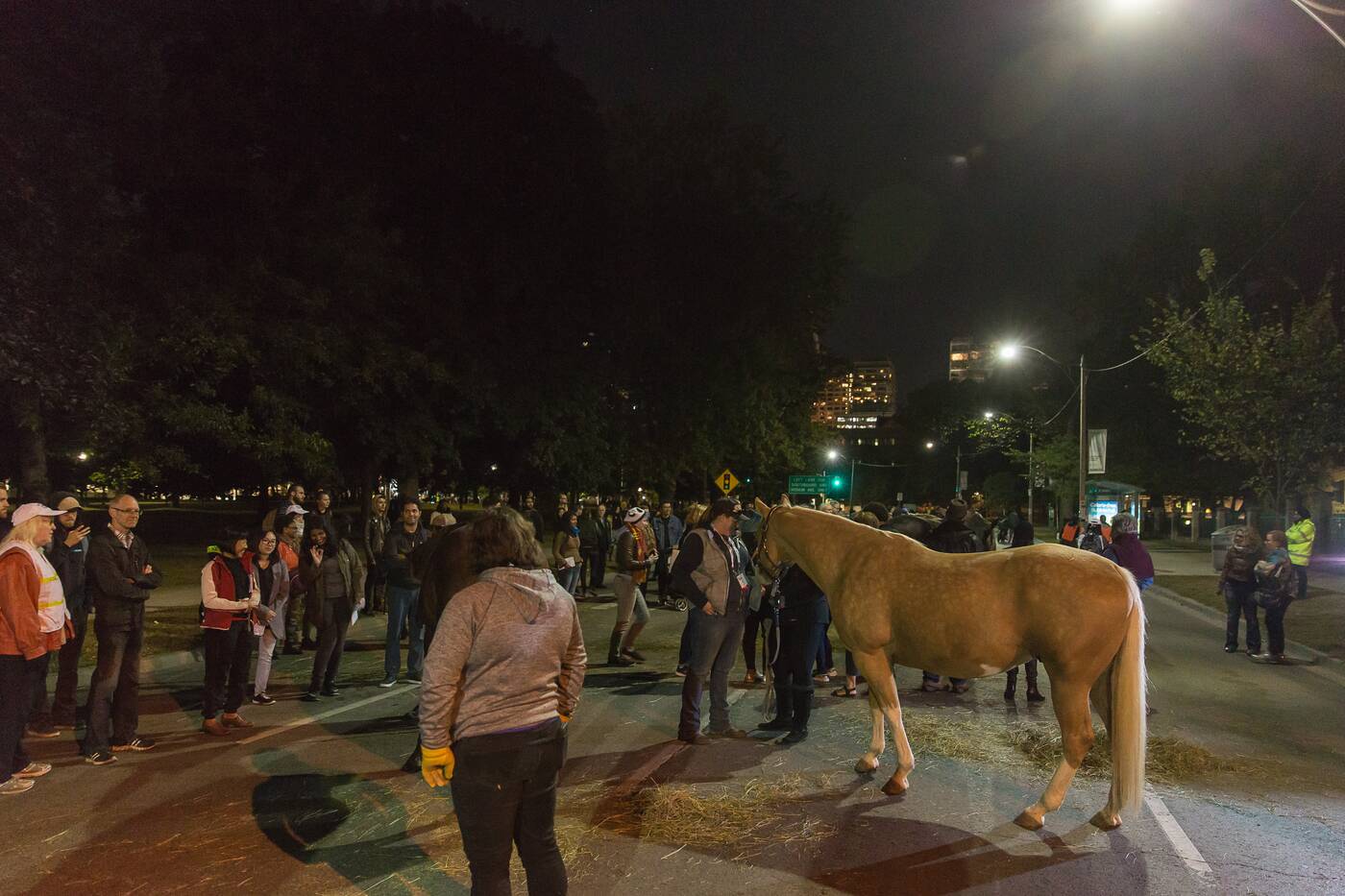 While the exhibits might have been a bit too spread out in this section — Taking to the Streets — the idea to host a significant portion of the event here was a good one. The ample space meant crowds were kept in check and festival-goers could focus on the installations rather than the drunken spectacle that often erupts after 2 a.m. 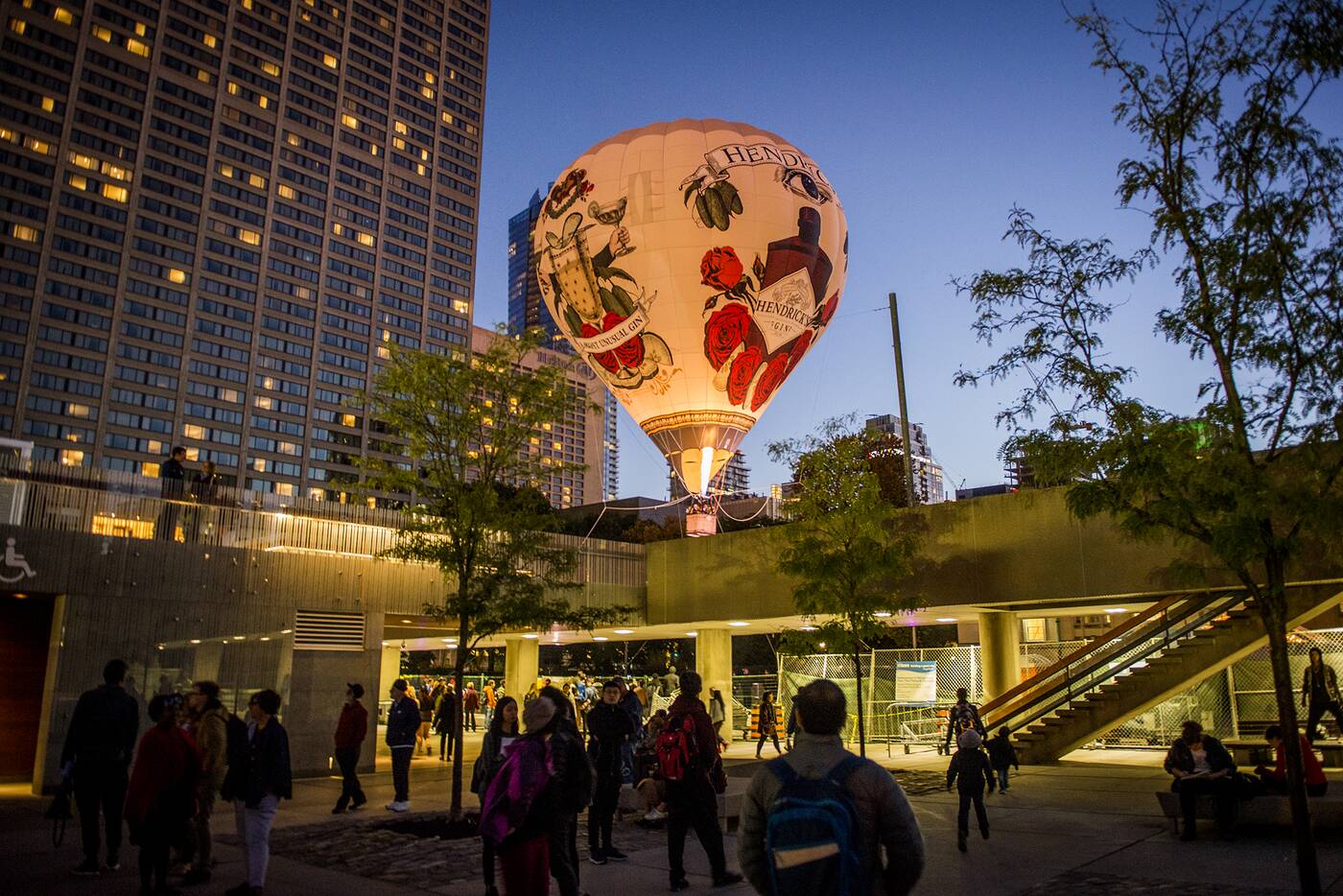 The Hendrick's hot air balloon drew a crowd throughout the night. Photo by Hector Vasquez.

Despite the lack of a headline sponsor, this year's Nuit Blanche certainly had a major corporate component, but interactive exhibits from Netflix (the Red Forest) and Hendrick's Gin (the giant hot air balloon) drummed up significant excitement from attendees. 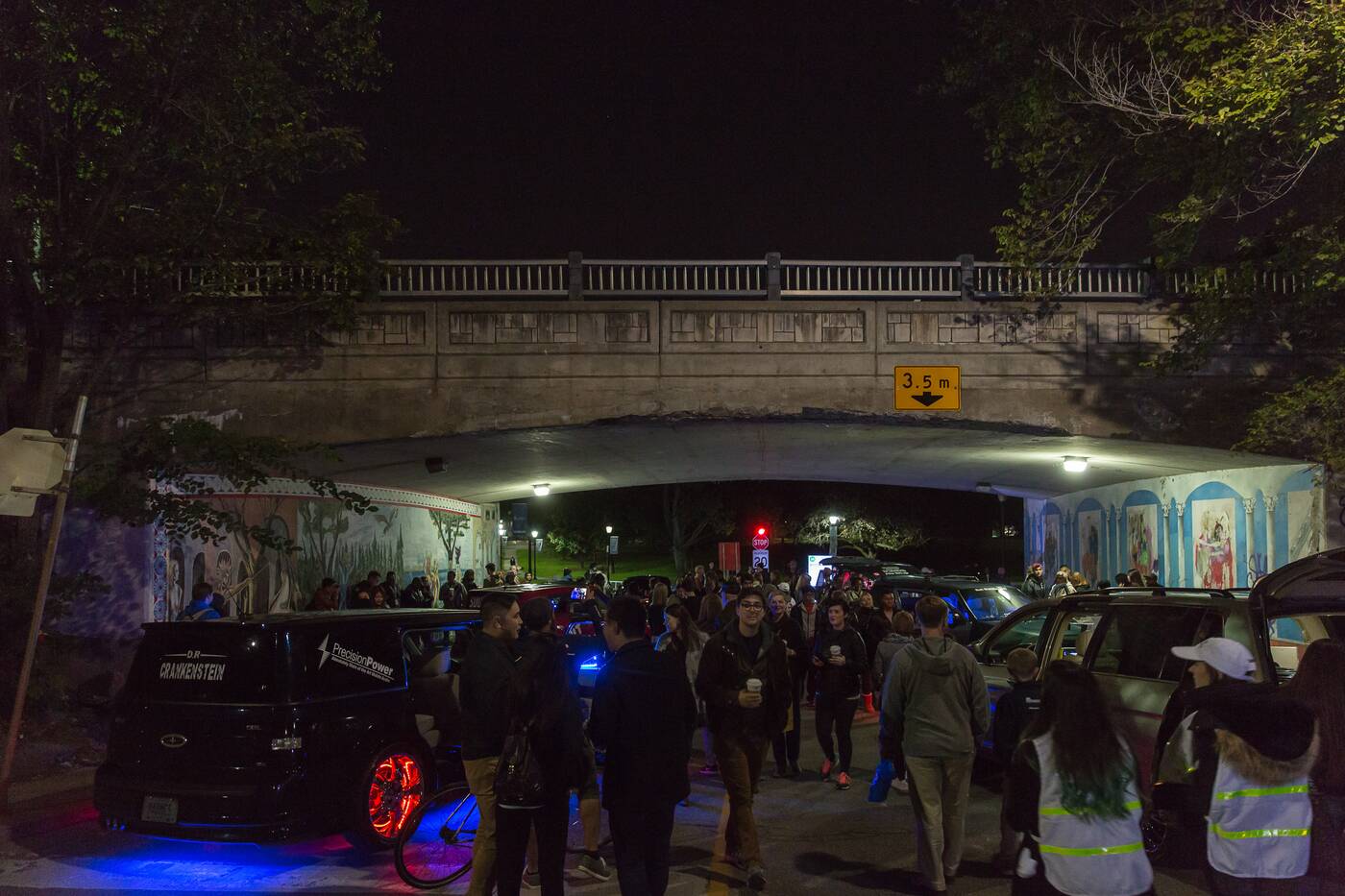 The space under the Wellesley Street Bridge was turned into an impromptu rave. Photo by Andrew Williamson.

Nuit Blanche embraced music and performance on a level not seen in at least a few years. From the stage at Nathan Phillips Square to the flatbed truck / DJ station near College and Queens Park to the "car rave" under the Wellesley Street Bridge, there were ample opportunities to dance. 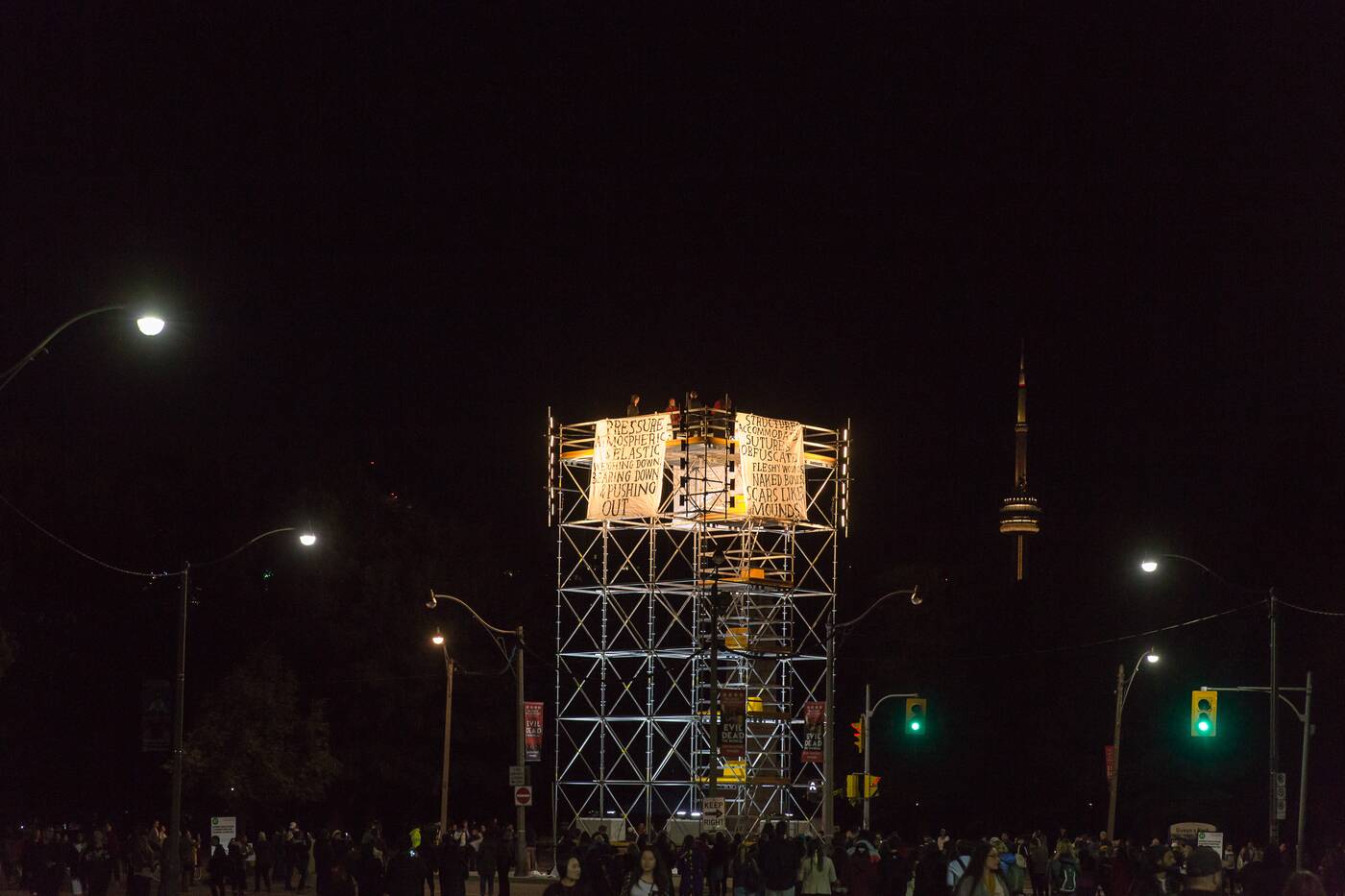 Where Once Stood a Bandstand for Cruising & Shelter was a hit. Photo by Andrew Williamson.

Everyone will have their favourites, but some of my highlights from 2017 include Automobile, Where Once Stood a Bandstand for Cruising & Shelter, Embassy, Serpent People, and Porta-Party, and Dream Variations. 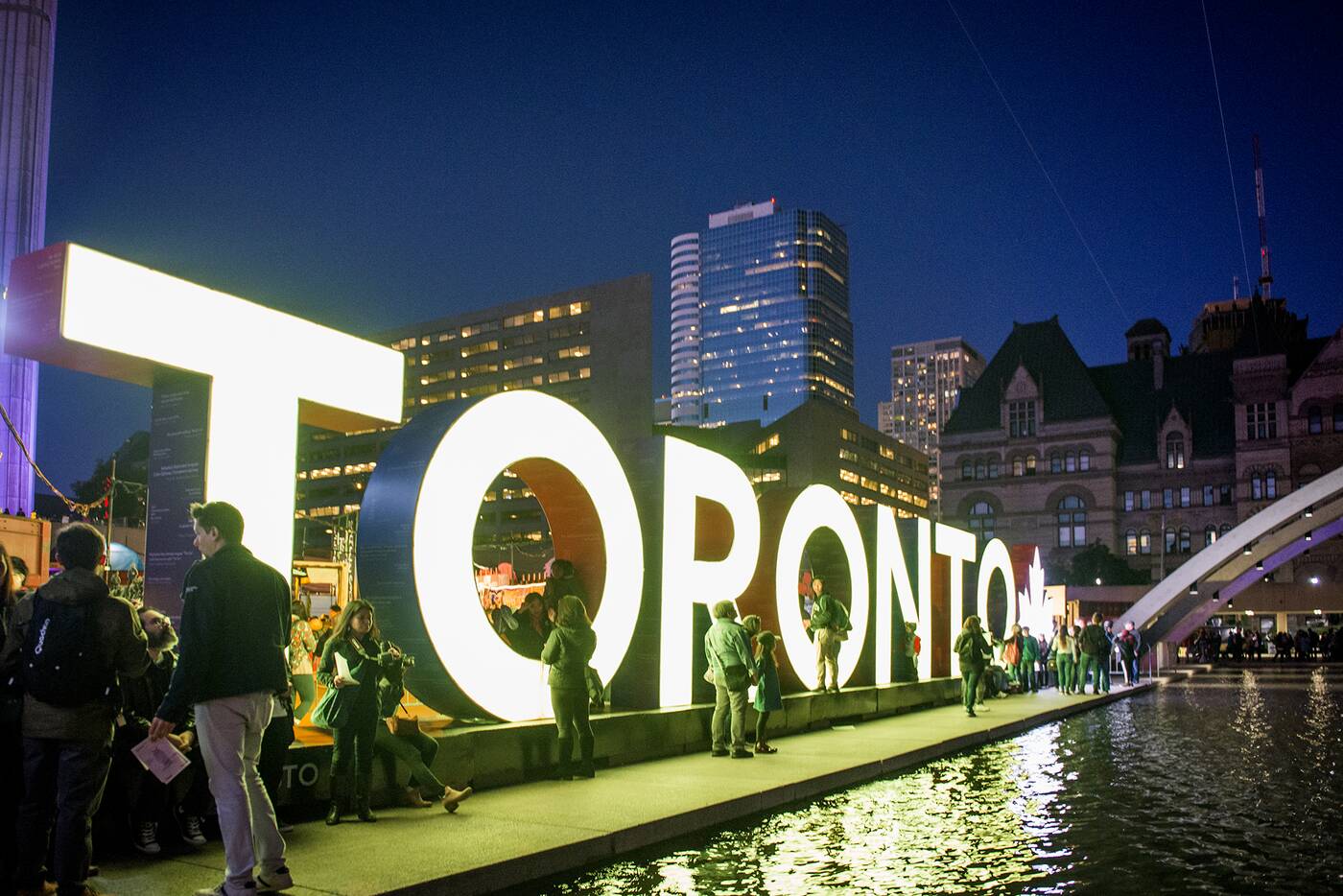 The Toronto sign received lots of attention while people waited to get into the main exhibit at Nathan Phillips Square. Photo by Hector Vasquez.

This isn't a slag of the thoughtful art presented at the various shipping containers around City Hall, but from an organizational standpoint, a gated exhibit at the heart of the festival didn't lend itself to the type of inclusive spectacle that should be the hallmark of Nuit Blanche. 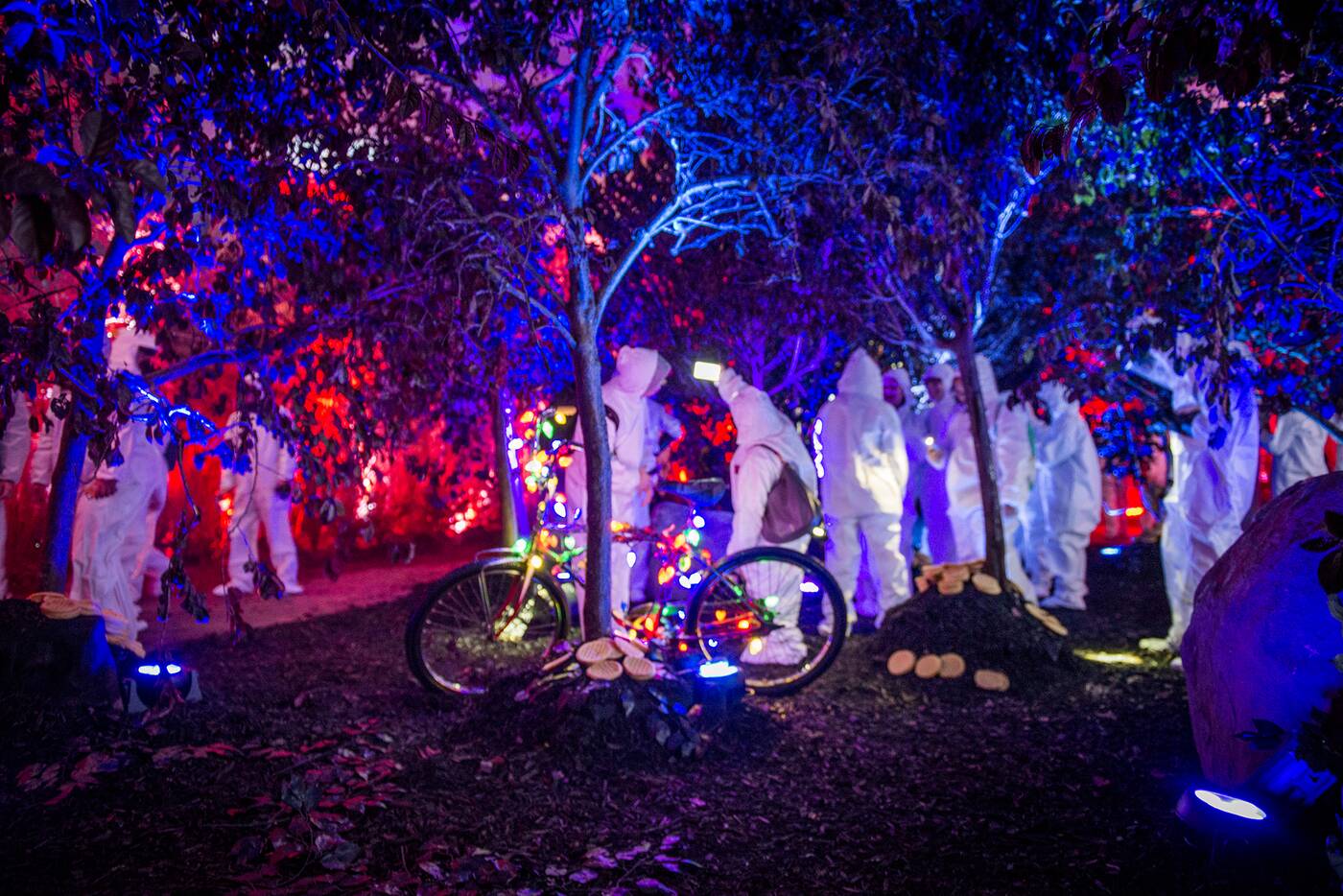 Everyone wanted to get into the Red Forest exhibition, but not all were willing to wait over an hour. Photo by Hector Vasquez.

It's a perpetual complaint with Nuit Blanche and perhaps a bit unfair given the attendance, but the lineup issue seemed particularly problematic this year on account of the congestion at Nathan Phillips Square and Osgoode Hall. The former in particular works better with open exhibits like last year's Death of the Sun. 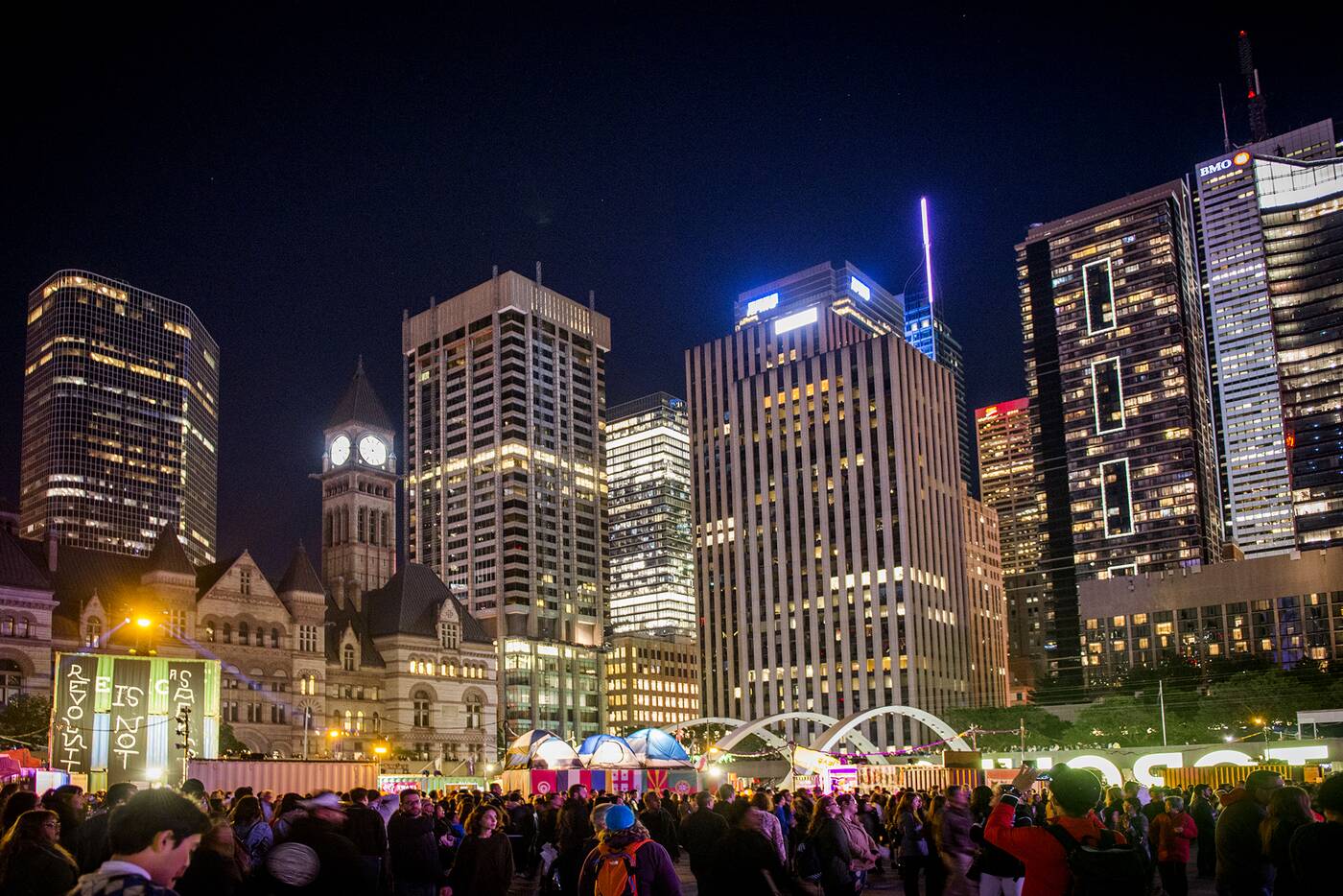 Nathan Phillips Square lacked some of the pomp of year's past. Photo by Hector Vasquez.

A lack of marquee exhibits

In recent years, Nuit Blanche has played host to major exhibits from Ai Weiwei, JR, and Director X to great acclaim. While this isn't always the case, such marquee installations really add a layer of excitement to the proceedings, especially when they're pulled off well.