The AGO dabbles in party curation with 1st Thursdays

Within five minutes of being inside the AGO on a Thursday night, I am drawn into an awkward exchange of looks with a naked man while Elton John's "Crocodile Rock" plays throughout the gallery.

A middle-aged AGO employee sees me pausing at the live sketch session where a chiseled, bleach blond male model sits nude on a stool, surrounded by 10 easels. I'm invited to take a seat next to a lone artist, who is adding the final details to a charcoal drawing of the model's face and absolutely killing it, but I refuse. It's too intimidating to attempt as a writer, I tell the gallery staffer. Plus, there's balls. 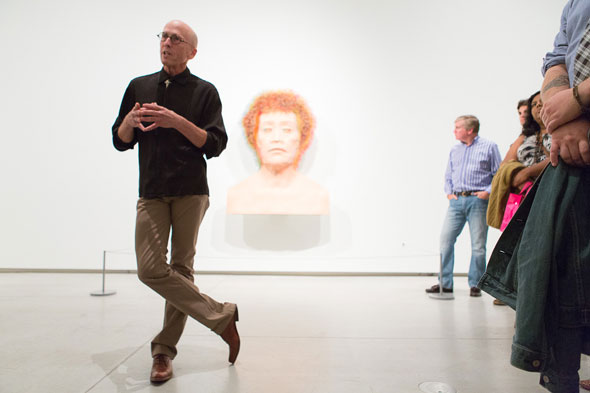 On the first Thursday of each month, the Art Gallery of Ontario transforms from its former image of stiff, haughty gallery to performance venue, a compliment to Frank Gehry's redesign of the space. October 4th marked the inaugural 1st Thursdays event in the series, which perfects the art of party curation with live music, exhibitions, artist talks, and, yes, live nude drawings for the after hours drinking crowd. Offering a weekday alternative to the bar scene for 20-somethings in top buns and boat shoes looking to incorporate art into their nightlife, the party invites a collision of musical and visual arts with Gehry's curved sculptural touches serving as a backdrop.

Live nude sketching stations were scattered throughout the gallery, tucked away in quieter rooms as people roamed during the early hours of the party. Downstairs in the shopAGO, Trevor Kruse of Hudson Kruse Design hosted a DesignTALKS lecture about small space condo living--a topic relevant to about half of the mixed crowd of yuppies, trendsetters and the odd middle-aged couple, who seemed surprised but pleased about being able to wander through the European Collection with a chilled glass of chardonnay. 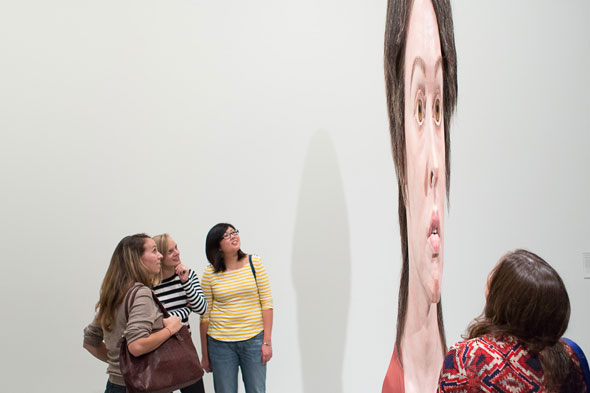 Mike Juneau of Humble Empire starts the evening off on a syrupy note, playing Tom Jones and the Jackson 5, which he carefully pulls out of paper sleeves tucked in the original vinyl packaging. Later in the evening, his vantage point on the west side of the AGO atrium will become a hub for local bloggers, PR folk and Twitter celebrities, who Instagram their way through a performance by Bahamas.

I head up to the 4th floor of the gallery around 7PM to sneak a peek of Evan Penny's Re Figured. Reading online descriptions of the exhibit did not suffice; I emerge without enough words to describe the sculptures, which are much more than just enlarged busts. They are hyperrealism in its most extreme form, with heads and bodies so perfectly human, they seem artificial. Penny uses human hair, resin and fabrics to create the skin tone and wrinkles; the term "lifelike" does not encompass enough meaning to grasp these sculptures trueness to form. 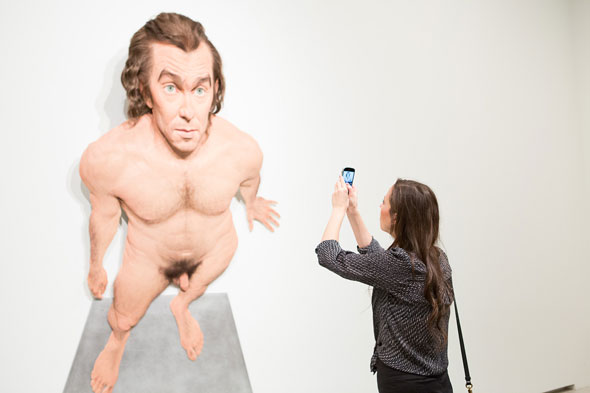 "These are not portraits," the Toronto native tells the audience during his artist talk. "They are pieces on the subject of portraiture." A master of distortion and the subject of portraiture, 60-year-old Penny is a former film industry worker who speaks succinctly about his ten years of work on the 3D silicone sculptures of Re Figured, his first solo exhibition at the AGO.

The exhibit features over 30 pieces that stretch and shrivel depending on the angle due to the artist's practices of offset printing and 3D scanning. The crowd floats with Penny through the gallery, hanging on his every word as he describes his work, noting that he starts with stereotypes of the faces he sculpts--old, fat, young, thin--and works away at them, completing 6 pieces per year, until individuality overrides type. By the end of the talk, most members of the audience have stupid grins on their faces because, as one young woman put it, "This is so cool in here!" 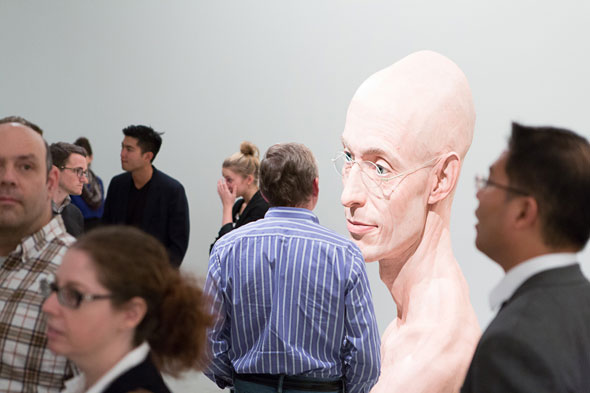 When I emerge from the 4th floor gallery, it's 9PM and the main floor has filled. The older crowds have disappeared and the 20-somethings all group around the small, makeshift stage at the centre of the atrium. The music has changed to slick indie rock. Juneau plays Bon Iver but the remainder of the music embarrassingly requires the use of Shazaam for identification. 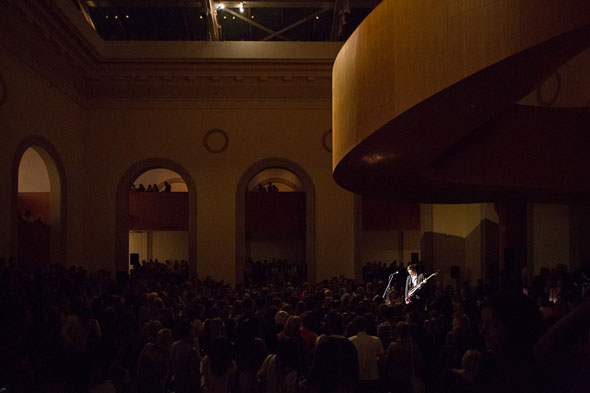 Bahamas walks out to the atrium stage and gives a modest wave. His large following has made him the unofficial headliner of the event. He swings his acoustic into position and gives his hair the JFK swipe before breaking into his melodies that are so soft and comforting, they hush the crowd for the next hour during a deadpan performance with few words between songs. Bahamas is a Bon Iver meets Jack Johnson type and a modern day crooner, but such descriptors cheapen the work of the 31-year-old Barrie, ON singer-songwriter, who released his second album this year.

The crowd sways and a young couple slow dances amongst the bodies, surely to many "awwws" around them while the artist, born Afie Jurvanen, plays songs from 2012's Barchords. He cracks a joke before diving into the second half of his set, performing "Lost In The Light," "I Got You, Babe" and "Caught Me Thinking." When he is done, he walks away, wordlessly. The crowd in the atrium begins to disperse, indicating this was not just an art party but a Bahamas concert in its own right.

It's 10:30PM and the crowd is filtering out through the doors, many waiting on the steps of the AGO to find displaced friends. It's early but the AGO has achieved what it set out to achieve: the gallery successfully brought a younger nightlife crowd into the gallery and throwing a good party somewhere in between.

Now if only the youngsters would get off the AGO's front lawn. 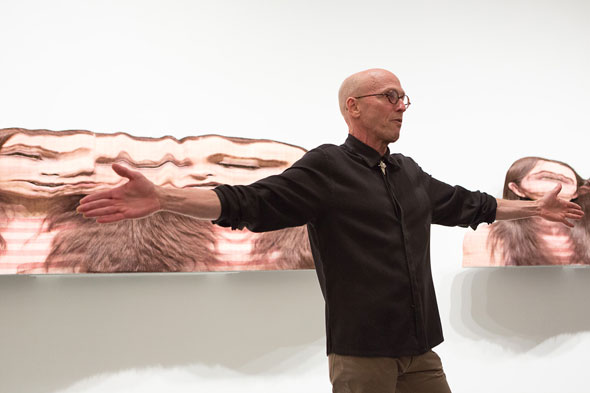 The second installment of 1st Thursdays takes place on November 1st at the AGO (317 Dundas Street West). Focusing on photography, the evening will feature the Grange Prize Public Party and Winner Announcement along with the opening of an installation by artist Mark Titchner and DesignTALKS with Tania Bortolotto.