Ballerinas are busy people. So much of their professional lives are run by a watch; a badly timed catch or jump could end a career in injury. As we sat down to talk about Cinderella, Rebekah Rimsay's latest ballet, the ticking clock motif extended itself to the interview.

We met at the cozy Zippie Cafe (Roncesvalles and Queen) at 8:30 in the morning. The first thing that struck me was her natural, undeniable elegance. Every smile, every word, every sip of coffee exuded balance and control, traits she no doubt cultivated at her odd profession. Maybe I've just spent too much time with the indie set, where true poise is calculated by how gracefully you can flip a Zippo.

We had to go back and forth with our schedules all week to hammer out a meeting, and still there wasn't much time. Born in Colorado, Rebekah's family moved to Newfoundland when she was a child. Stage presence, hard work and a lithe, muscular figure impressed the Toronto scouts, she moved here in her teens to study at the National Ballet School.

Becoming a first soloist in the late nineties, she's played roles ranging from 'The Wench' in La Sylphide to 'The Sugar Plum Fairy' in The Nutcracker. In Cinderella she has a unique take on 'The Other Step Sister'; she's awkward, plucky, and helplessly careening across the set whenever her glasses are taken away. I wanted to call the police by the third encore; she had stolen the show. 'Cinderella' is running until June 8th, it's a fast paced, cheeky, Art Deco take on the European fairy tale.

Anyhow, back to that morning. After taking a couple shots inside the cafe, I asked Rebekah if we had any time to step outside to do a picture. With a five-minute deadline I found a single location across the street; a doorway with the kind of cracked, weather beaten paint I enjoy. She was a pro as I fought desperately to get the shot; the weather was bitter and the rehearsal hall was waiting.

As she left the cafe in an orange cab I felt like a prince yearning for one more dance. I found her again though, on stage at the Four Seasons. The glass slipper did fit Rebekah, the step-sister belle of the Ball. 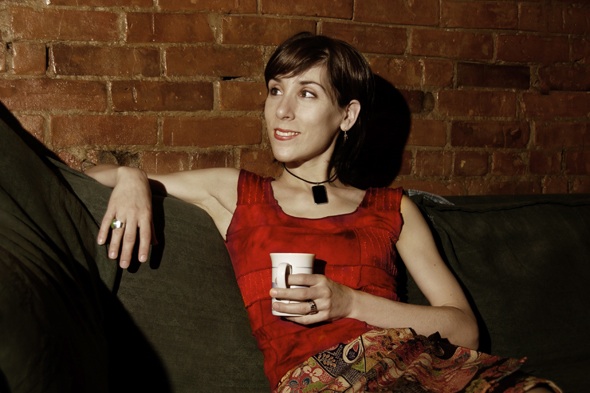 The first commenter who can come up with five words that have a silent 'T' (other than ballet) will win a pair of tickets to the upcoming National Ballet of Canada's Mixed Programme on June 21, at 7:30 pm. It's a great way to catch Rebekah perform, and also to see nine songs from the Joni Mitchell songbook interpreted in dance.