Were you at Bay and King at around noon today? 'Cause if you were, you probably noticed two things.

First, Raine Maida was busking on the SW corner of the intersection. He was accompanied by two other guitarists, though all the cameras and people were clearly focussed on the old Our Lady Peace singer.

That's all well and good, but if you scanned the SE corner for a moment you'd have noticed the two ladies from The Atomic Cherries stripping to their undies. 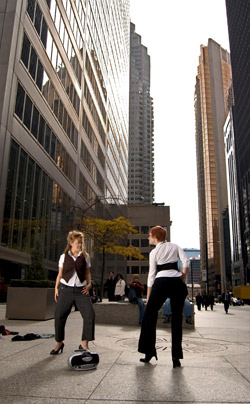 "We have to compete with fucking Raine Maida?!?" were the first words spoken to me by the girls.

"Fuck Raine Maida," was my witty response. A friend who came along for the ride was in agreement. We were there for a relatively secret burlesque show in the heart of the Financial District.

Accompanied by a cheap boom box, St. Stella and Ms. Black (one of whom I just found out is blogTO's own Rebecca- Contrary to popular belief, we don't have daily Uno matches at Tequila Bookworm so we're not all necessarily BFFs) of The Atomic Cherries stripped down to their skivvies alongside to some music that I've since forgotten for the most part, possibly because I could barely hear it and partially because I was visually distracted.

My friend couldn't remember anything either, for the same reasons.

The themes of the show were sex, art, dance and money. The sex, art and dance were all covered by the guerilla-esque show itself, and money was being tossed out at random intervals. Penny tossing for the win! I also recall that 80's "I want money" song gettin' some playtime.

But screw all that, there were two girls stripping in the middle of the financial district. It was HILARIOUS to watch people pretend to avert their eyes as they were walking by while chattin' on their cells. Plenty of double and triple takes all around, with St. Stella and Ms. Black inviting them to come and dance. No one obliged aside from two guys who were aware of the show before it started, and even then, they weren't dancing with the ladies. They were doing their own thing. 15 feet away.

It was morally reprehensible. From that, I had to avert my eyes.

It was pretty damn cold, so the show was pretty damn short, but it definitely succeeded in disrupting the daily grind for at least a few dozen people in power suits, so I declare it an all-out success. St. Stella, Ms. Black, my friend and I would both be glad to watch you dance in public again.

PS: Peter pointed out that the Cherries are playing a less secret show at the Bovine this Sunday. Got Facebook? THEN CLICKY!

Photography by The Ninja-bot, also visible on Flickr and BlogTO's pool