On Friday night Matt Crookshank's Lick the Frost of the Dream, his second solo show of paintings opened at Le Gallery. It was a swanky affair of delicious treats, import beer and gorgeous digital art.

In big blockbuster movies you always see outstanding futuristic art on the den wall of the villains' home to illustrate their intellect and obsession for control in/of the future. Crookshank's latest series 'Turbulence,' is the kind of art you could see hanging there.

Turbulence is a series of 11 large-scale, glossy, digitally generated paintings that I initially thought they were reminiscent of what you might find if you were scuba diving on the bottom of the ocean with a microscope. Discussing this possibility with other guests at the opening, it was thought that they looked like viruses, (STD's to be specific). In fact, they are 'Crookshank's nebula', the mass of a universe captured for an instant. 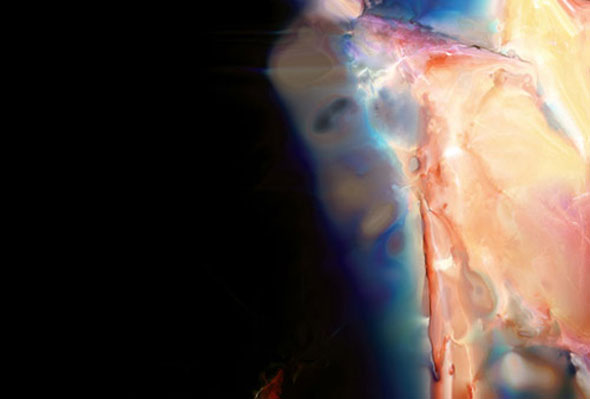 The paintings are fascinating. The colours are iridescent, the blacks hold depth and each piece suggests a voiceless or secretive space drama is about to unfold.

Presented with 'Turbulence', is the series 'Lick the Frost of the Dream'. 9 canvases of swirls and grids layered in oil and varnish that feel like an organic precursor to the digital series.