This Wednesday, Steam Whistle will open up the newest exhibit in their in-house gallery, highlighting works by two Toronto artists, Anthony Valin and Adam Matak. Valin's moody facial portraits will contrast with Matak's ascetically assembled paintings, making the journey for your 2-4 of green soldiers a visually stimulating one.

Matak and I go way back (YLCC represent!), and I was able to ask him a few questions via email. Here are his thoughts on being an artist in Toronto, how hip hop inspired him and influenced his style, and the validity in the concept of "high" and "low" art.

KG: You've been in Toronto for a few years now, teaching and creating. Where do you feel you stand within the Toronto art movement? Do you feel like once you've "made it" in Toronto, you can then become successful in other cities? Or could you care less what Torontonians think? 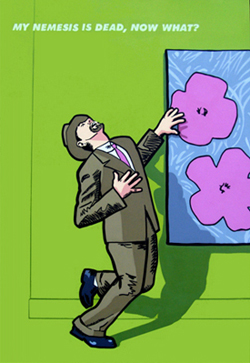 AM: We are lucky in Toronto. Toronto is a painter's city. There are many opportunities for a painter to show in this city.

The artists in Toronto seem disconnected to me. We need some kind of movement or collective. Everyone seems to be working very isolated from each other, though I am really digging the artists Wil Kucey is bringing together at LE Gallery.

I started to get really hyped when Luke Painter, Steve Driscoll and Stephen Ibbott did this show Beyond the Firewall. It was like they were forming a collective. They showed giant works in a warehouse off Dufferin, and had super-slick promotion for it... I actually connected most with their marketing and branding of the show. Then it just seemed to fizzle. And that was like 3 years ago, though Luke Painter is still doing some really cool stuff. I really dig Eliza Griffiths, too, though she spends most of her time in Ottawa... but there are a few painters in the city just making work like hers, so that makes her more present.... "Oh look, there's another figurative painter doing work like Eliza!" I love the stories she tells in her work. Narratives have always really driven my making.

KG: I often find your artwork is all about juxtaposition, and relaying a message in the process. What message are you trying to get across in your latest body of work?

AM: I think we're all trying to figure things out. There is a lot of back and forth in my work - part of it is me trying to work things out and the other part is for the viewer to work out. I am really interested in the idea of the real and fakes, surrogates, stand-ins... how people treat the monuments in Vegas as the real thing. Our daily interactions negotiate between "real" and filler or "stand-in" moments. The figures in my works are searching, worrying, helping, fighting, bragging... though I wouldn't call them illustrations or metaphors. I'm interested in the ways in which ideas intermingle with the materials to make paintings that are meaningful. That larger picture makes them more than just self-referential. The image and idea need to intermingle.

KG: Who are your major influences? What are some of the artists you've drawn inspiration from while working in various museums over the past few years?

AM: Funny enough, a major influence has always been hip hop music, particularly the sampling, the quoting. Chuck D from Public Enemy opened my eyes when he would quote himself in his rhymes; as if to say this was real fresh, I'm gonna say it again so you'll get it, or Rakim making choruses out of one of his lines from an earlier track. I think that really formed my process. For this series I work with "lookers and talkers" which are figures, the "eye candy" which is the paintings and text. I have folders of all these images from the news- ads, photos and text- that I sample from and puzzle piece together and try in different combinations. When something works, I draw and redraw them. I then try different colours the same way. I see it like a dj flipping through records looking for just the right beat, the right sound bite...

There are so many visual artists that influence me... Iain Baxter had a major impact on me. Working with him really opened me up to the idea of play with art making, and text. I started working with text a lot after working with Baxter. I dig William Ronald, too. He was a Canadian painter who also hosted TV shows. I felt akin to him with my speaking at conferences and teaching. People gave him flack for "double-dipping" like that. I did a painting of his (The Hero) in one of the paintings in the show. It's the 50th anniversary of that painting this year.

KG: Do you agree that artwork can be classified as "low art", such as comic drawing or graffiti, and "high art"? Have you had trouble getting people to take your work seriously, since it's based on "low art"?

AM: Yeah, I use that vernacular so people can picture it in their head. I think the line between high and low was obliterated long ago, it's all about location. It can be garbage on the street, but if it is in a gallery, it has new meaning. The gallery space makes people pay attention. I'm sure there are people put off by my style, but I think it makes up for itself with the subject matter... like Calvin and Hobbes having philosophical banter.

Steam Whistle hosts art shows in their Retail and Hospitality area on a monthly basis, and admission is free. The gallery is open from 12pm to 6pm, Monday through Saturday, and 12pm to 5pm on Sundays.