I don't know much about La Lucha Libre - Mexican wrestling masks have always reminded me of Bane, the comic book character that broke Batman's back twelve years ago (don't worry, he got better). Yesterday, I was given a whole new set of images to associate them with. Throwing booze, art geeks and LaBamba'esque rock music into the mix, The Embassy in Kensington Market, hosted a free evening of La Lucha wrestling.

The Embassy's walls were adorned with all kinds of La Lucha inspired artwork and a wrestling ring was crammed into the back of the bar. Stretching from wall to wall, it was made of wood and a few cheap foam mattresses. How were they going to manage all that jumping and flipping around?

One approach was to fake it. In the first match, two girls in one piece bathing suits - both with great legs by the way, faced off in a match that seemed loosely choreographed. The girls put on a real show. Mid-match they'd slow it down and while one of them had their legs wrapped around the other's waist, they'd dip each other ballroom dancing style or just rub bums together for a few seconds. Either way, it was awesome. 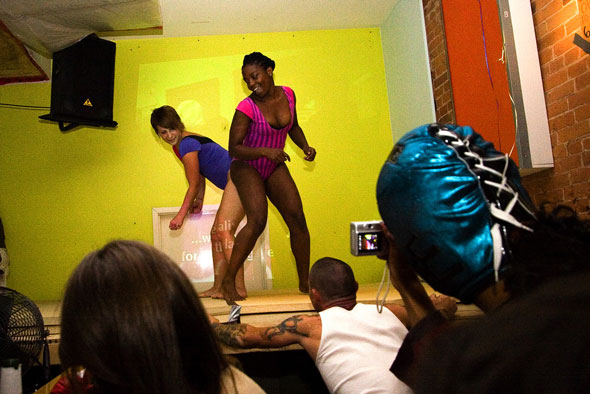 The two dudes who wrestled next, offered a more faithful interpretation of the sport. Wearing the traditional masks and dressed like a nun and a cross-dresser respectively, they started picking each other up and slamming themselves down on the cheap foam matt. Some of it looked like it really hurt. The art geeks loved it and playful cries of "Kick his Ass!" could be heard amongst the general oohs and ahhs.