Hey, here's a thing to do: rock up to a dealership and test-drive an insanely expensive and meticulously crafted automobile, just for fun. Al Pacino did it, and he was blind. So why can't we?

Our first thought, being members of one of the most equality-drunk societies going, is that, yes, of course we can. Conservatives and the unimaginative love to pat us all on the back by saying that we listen to a white rapper and watch a black golfer, that women can play hockey and men can do, oh, some girly thing. It is in this spirit that I can test-drive a Rolls Royce. Or so I believed.

I could even get up in arms about it. Like, who would the dealer be to say that I can't take a half-million-dollar übermachine out for a joy ride? How does he know that I don't have trunk loads of cash at the ready to fling at such a thing? If he were to refuse me I could accuse him of socio-economic profiling. I have rights! 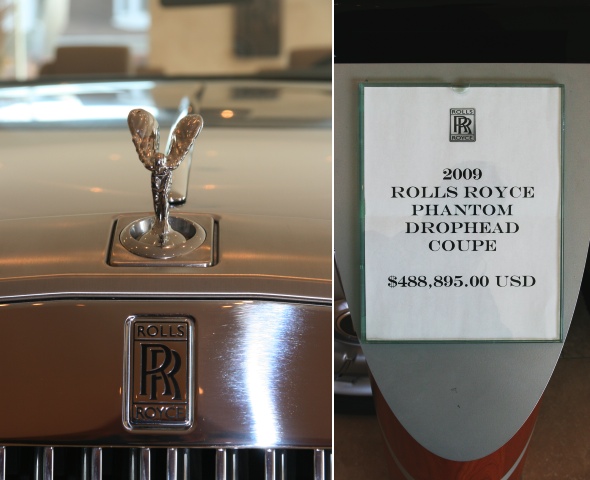 Despite my rights activism, I thought I should at least look the part. I needed an adult, not some twentysomething wiener in tight jeans and a stamp on his wrist from last night's show (like me), but an adult-adult. Someone over 40 who looked like he could have money.

Luckily my father was in town last week, visiting from Halifax (902 what!), and he had a good pair of shoes with him. 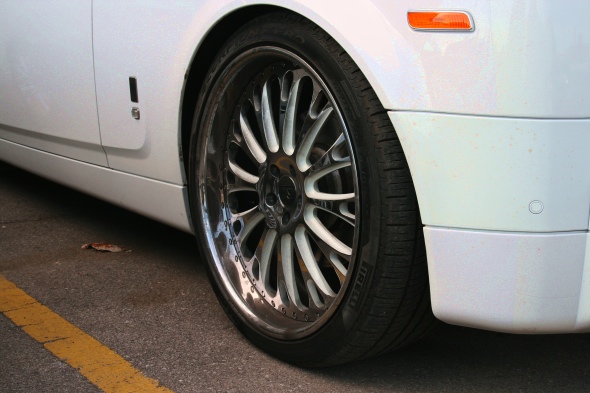 Wearing our best, we arrived at Grand Touring Automobiles on Dupont where we met Dean Jordan, one of the dealers. Mr. Jordan's specialty was the Aston Martin, and although it wasn't the most expensive brand on the lot (that went to Rolls Royce), it was what I most wanted to test drive. 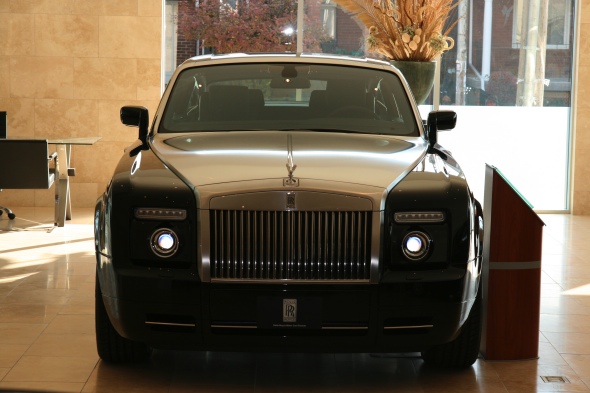 Dean was the real deal. As British as the cars he sells, the man worked for 15 years at the Aston Martin plant building the machines by hand. In his great Midlands accent he delivered a Tommy gun of factoids for us:

• The leather used on the interiors is procured only from cattle farms in northern climates because there are less biting insects to compromise the hides.

• The common leather interior aims to use the whole cow, Aston Martin instead recognizes that the read-end of the animal offers the softest, smoothest leather and so each of its interiors is created by sewing nine cow asses together.

• The cars are made entirely by hand and they produce less than 1000 of them per year.

Interesting enough, but I hadn't come to chat. When I asked about test-driving one, the man looked at me a moment, and then to my cohort, and then, with magic words that I cannot recall, we were rendered completely powerless. (He may have just used that flashing memory-eraser thing from Men In Black for all I know.)

We would not be test-driving a car today.

This is the sort of magic that men like Dean have. He was able to tactfully rearrange the situation so that we were not going to be test-driving anything, but we weren't any worse for wear for it. An artful manipulation. 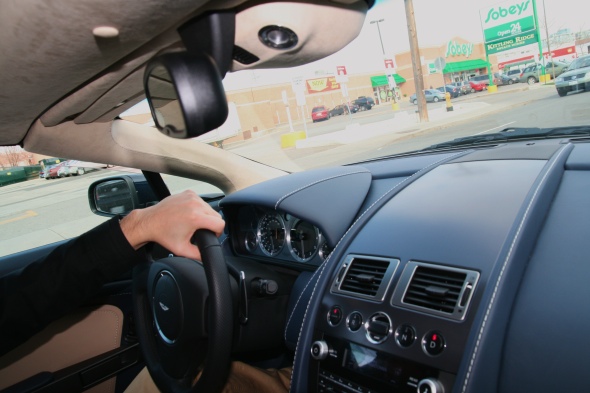 Just the same, there I was, 10 minutes later, behind the wheel of a V8 Vantage Aston Martin. Under my fingers, through the cow-ass leather steering wheel, it was pure power and precision. Dean came with, in the passenger's seat, and so we got to talking.

He told me about his days working in the Aston Martin factory, and about how he had test driven the famous DB9 (the "James Bond Car") on a track in Spain. And then it hit me: this kind man who had spent his life building and selling one of the most beautiful things humanity has ever produced has never owned one himself and could probably never own one. An injustice, I thought. Dean has a right to an Aston Martin!

As I drove and he drew my attention to the shifting suspension system, I found myself saying "Top gee-ah" automatically in an exaggerated English accent. I hoped I wasn't offending my kind British ride along, but I couldn't help it.

When we returned to the dealership I finally steered the conversation toward my angle: how can the average Joe show up and test-drive something exciting? The short answer, he said, is that he can't.

"We'll look at his watch. We'll see what kind of car he shows up in," said Dean. It makes sense: the dealership is concerned about possible damage, but even more than that, they don't want to log any extra kilometres on new cars, but still, as a hyper-sensitive Canadian, the idea that I can't do something because of my socio-economic standing sets off (ludicrous, foolish) alarm bells. So difficult is this life of non-millionairedom.

The other option, he said, was that average Joe can lay down five or 10 grand as a deposit to test-drive one, but then again, said Dean, "guys like us can't do that."