GTA Tripping: Face to Face with the Devil at Puck's Farm

But before we tell you the tale of the horrible, gruesome day trip we took through the GTA's most sinister community -- The Township of King(!) -- let us cast the first bit of black magick together:

If you're reading this on an Apple computer, invoke the following spell: Say "Humba Fumba Bim Bam Boo Chris Rules" three times and then hit control+option+apple+8. You are now cursed to read this story in the dark! (Unless you invoke the spell again right away -- your call.)

If you're reading this on a Windows computer, I don't know, go turn some lights off and maybe remove some clothing so that you're chilly. Now, read on, if you dare...

Our tale begins on the highway, heading north, where our brave travelers covered themselves in garlic for protection against vampires and our photographer Petia's driving.

In setting out on our quest for evil we brought with us our friend Thom, the White Giant, for luck, and Hye Jung, the Korean, 'cause she told us that Koreans are more superstitious than Canadians and so she'd probably be really good with ghosts and that kind of stuff.

When we rolled into the Township of King, Petia commented that small towns are always creepy. We all agreed. "Township of Stephen King, more like it." 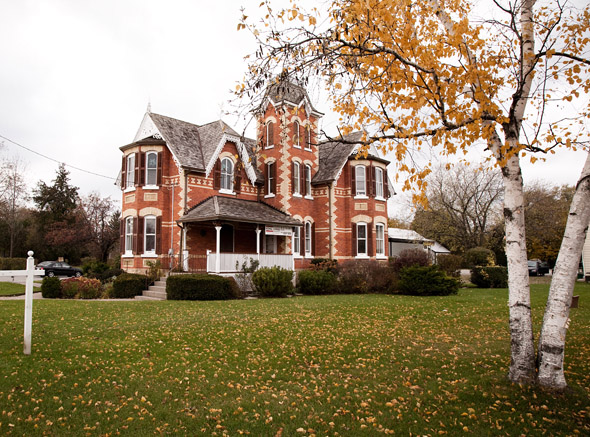 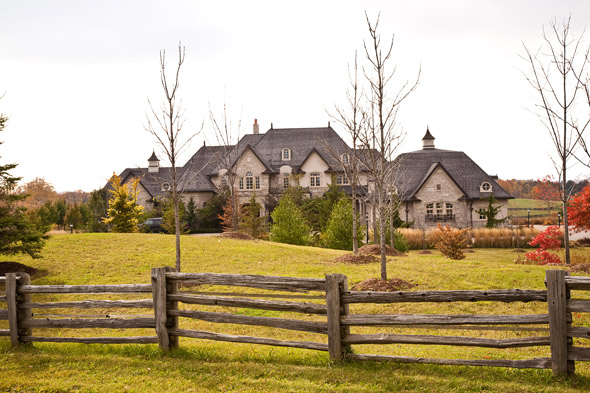 The place begged the question: What does one do in a small town like this? A small town of Victorian houses fixed with widow's walks, dilapidated barns and hard-staring folk? (And why do all small towns have these three things?) Murder, be murdered or maybe visit the local pet cemetery when you're tired of all the death, we supposed.

Eventually Hye Jung sensed something. An evil presence, she was sure, was at a farm just ahead.

Sure enough, there was something there;Puck's Farm, a sort of farm-like theme park, just ahead on our left. 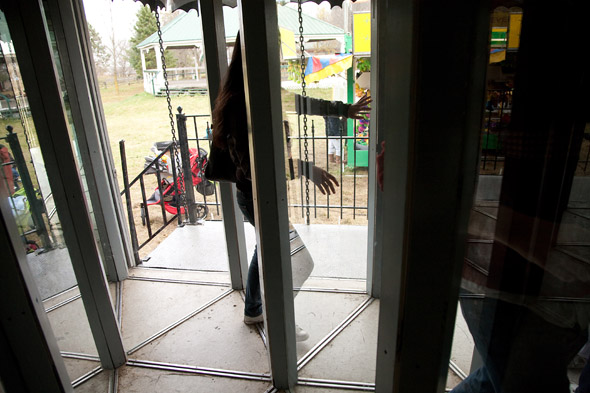 Puck's was full of children, all of whom seemed gleefully unaware that they were in the midst of evil. We said a quick prayer for their souls and then set out to explore. 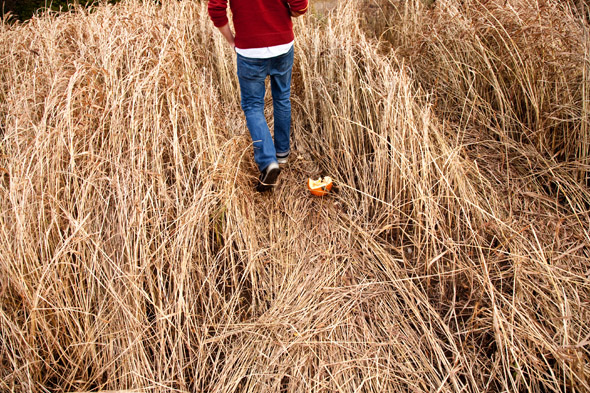 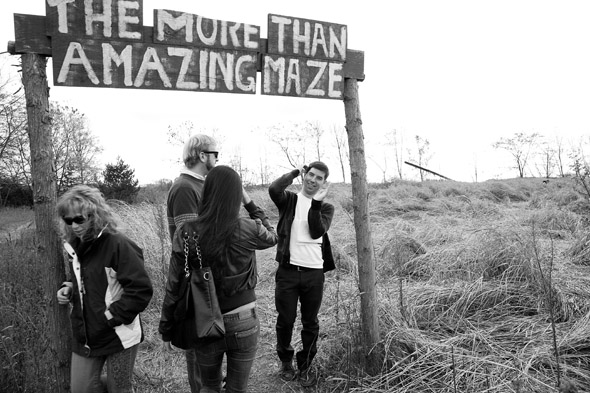 There were many activities and distractions at Puck's. Amusement rides, a couple of mazes, and scores of animals for the petting, riding or smelling. 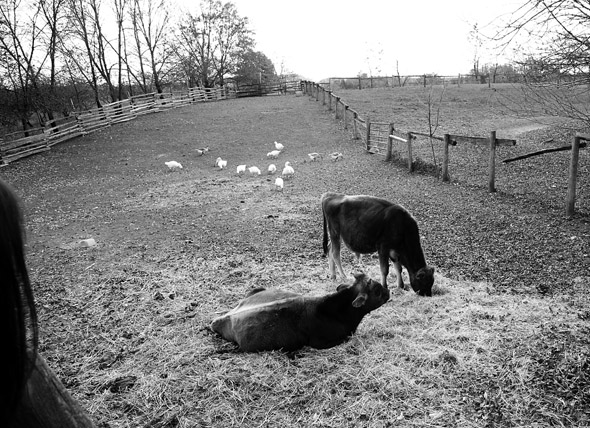 The animals seemed a little off to us at first, but then we started noticing them acting strangely. Their eyes were all glassy and they seemed to be passing gas far more than we thought normal. Horses, chickens, cows, ducks, donkeys, goats, pigs -- each of them eventually seemed to us to be possessed. At one point, a vicious and infected goat attempted to eat my notebook, but I fought it off. 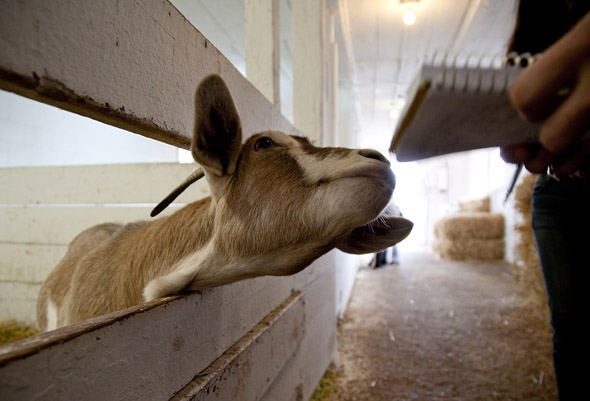 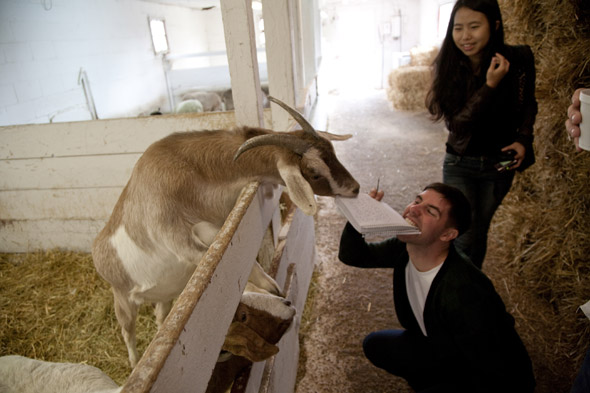 I think the goat knew something. Earlier, I had copied a series of spells I found on the Internet into that notebook for protection. It was trying to disarm us and render us helpless against the malevolent forces in the air.

After the incident with the goat, Hye Jung had a vision. She suggested we use our Luck Giant Thom and a spell from my notebook to try to appease the malicious animals surrounding us everywhere. A sort of ceremony, a gesture of solidarity with the wretched, accursed beasts would ensure us safe passage.

We gently approached one of the beasts, a cow deceptively named Sweet Marie. We found something in the Internet spell notebook that involved sharing blood to settle mortal feuds. Since Sweet Marie's keeper didn't seem keen on us sharing blood with his heifer, we settled on milking her.

"Oombah goombah ballawalla hey!" said Thom, as he squirted some fresh cream into his coffee and then knocked it back. "Ha! And with that we are one."

"But wait, you have not yet drank of me!" 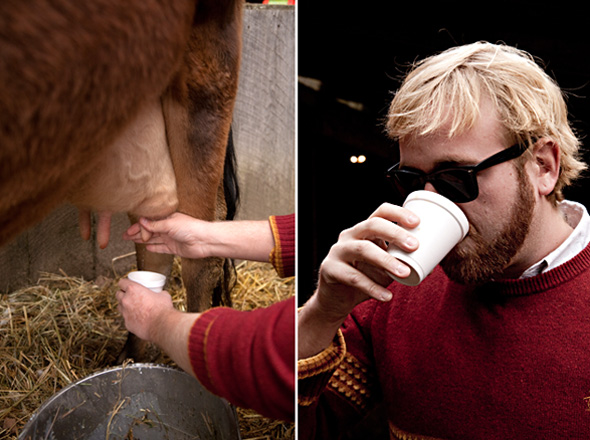 The cow didn't seem to understand, but its face had softened and become friendlier, so we assumed that the spell worked.

And then, just on the other side of the cedar maze, we saw him, finally. Hye Jung seemed to sense that it was him, but the rest of us recognized him from his modeling work he'd done on all those black metal album covers. 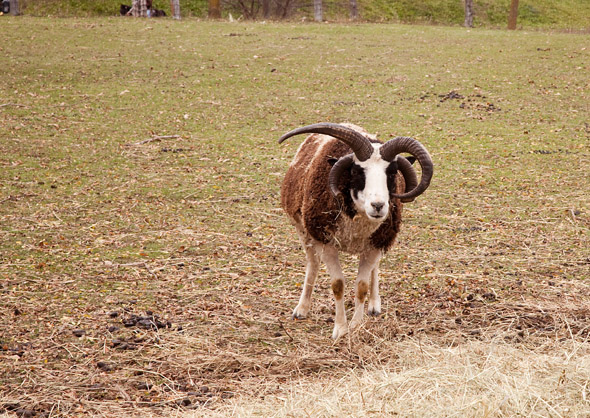 Satan. The Devil. Lucifer. That four-horned goat that rules the netherworld stood before us and frankly, we were really surprised by how big his balls were. They were practically down to the ground. I mean, how are you supposed to be all evil all the time and cause all those diseases and wars when you're constantly bumping your sack on rocks and logs and smaller goats? No wonder he's so angry all the time.

The goat devil must have heard us making fun of his balls, because as we left Puck's Farm, we all abruptly stopped dead as a wave of evil penetrated us. We got back into the car and tried to laugh it off, but after a few kilometres down the road, it was unmistakable -- the goat devil had cursed us.

We consulted the spell book. We'd need candles, incense, rose petals, a chalice, an athame (ritual dagger) and some rosewater to rid ourselves of the curse. We had most of those things on us (go figure), but we had to substitute a rum bottle for the chalice, a pair of scissors for the athame and a bottle of Hugo Boss cologne for the rosewater.

We stopped and Hye Jung sensed-out a good spot on the side of the road. As we were setting up our ritual objects for the exorcism, the owner of the property, Dan, stopped by and asked us what we were doing. When we explained our wretched predicament he gave us his blessing, a wish of luck and jogged away. 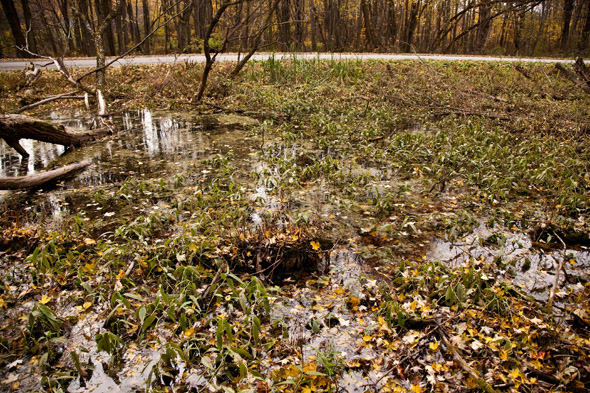 An auspicious visit it turned out to be. With Dan's luck, the luck of our Luck Giant, Hye Jung's powers and my book of Internet spells, we managed to pull ourselves out of the accursed grip of the goat devil and drove home safely to try on our Halloween costumes in the mirror.

Photos by the evil eye of Petia Karrin.