"In the black trunks and weighing in at 155 pounds, Diego Sanchez: World-famous UFC mixed martial arts fighter with a record of twenty-one wins, two losses. Specializing in gaidojutsu, he is known to train in thunderstorms so as to absorb their energy!

"In the dandy vest and weighing in at 155 (differently distributed) pounds, Christopher Reynolds: Guy!" 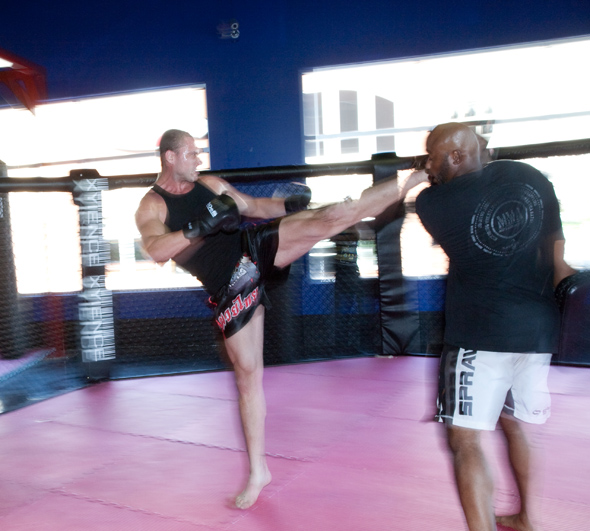 Or so thought I as we sped towards Vaughan last week for the official launch of Paramount Fight Club, the GTA's newest MMA-themed gym. Mr. Sanchez was slated to make a guest appearance, and when I found out that he and I weighed exactly the same amount, I knew I had to challenge him to a soul-shattering flex down.

At the gym situated directly across the street from the Vaughan Mills Shopping Center, there was a macho, sweaty buzz in the air. It was a swarm of tough guys, aspiring tough-guy children with their pensive mothers in tow, lower-echelon media types, "promotion models", oyster shuckers and champagne wielders, celebrity MMA trainers and the few stressed-out business partners involved in the endevour. 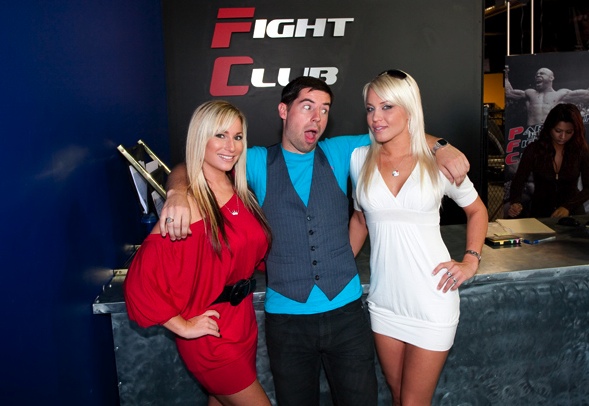 Sammy and Marco, PFC's non-silent partners, were conducting interviews on- and off-camera, answering questions about the new gym. Marco (Vice, local fighter), now covered in sweat from punching and kicking trainer-supported pads in the demonstrations, was answering questions about the new business, and about the sport of MMA. The man stood at about six feet, a billion inches and had the presence of a John Deere industrial combine harvester. He said things like, "You want to stay on the balls of your feet. Why? 'Cause you're just that much more explosive." He asked the "Why?" without leaving a beat. 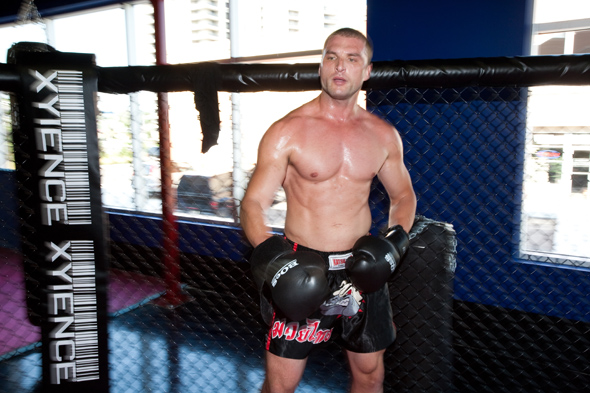 Sammy, on the other hand, bounced from interview to prospective customer to his various trainers and employees, perpetually Blackberrying and stressed to the MAX! To the various media types, he repeated his business's shiny new marketing pitch, "Whatever your fight is, bring it to Paramount Fight Club. Whether your fight is losing weight, boosting your energy, or getting your kids to do better in school, we can help."

Personally, I like the idea of kids doing better in school because they get to knock each other's blocks off in their off-hours. It was this very philosophy, combined with Sammy's obvious entrepreneurial chutzpah that impressed me and most everyone else there.

But we hadn't come to see some new gym. The crowd had come for Diego "The Nightmare" Sanchez! One of my friends had come to try to convince the champion to marry her and I had come to challenge him to this flex down.

But then the inevitable (inevitable to the more cynical members of our party) happened. I heard one mother pull the busy man aside to ask about Diego's appearance. All Sammy could say was "Family emergency." The kid's face fell and the two walked out. 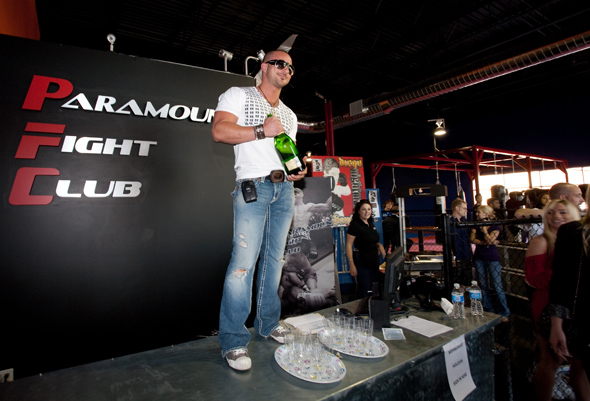 It was at this point that my travel partners, at least as disappointed as that young boy that their hero wasn't going to show up today, decided to turn our mission into an anthropological study beginning with Sammy himself. They noted and discussed the notion that he seemed to be a member of a newer species of first-world man. The group is characterized by a vanity expressed through an excess of tribal tattoos, diamond earrings, meticulous facial hair, tanning bed-kissed muscles, $300 jeans and all-over print tops - Douchebaggius Maximus was the Latin, my friends informed me, but I think they were just mad.

Not I, though. While I agreed with the fact that Sammy and his ilk seem to represent a "style", I wasn't going for the character judgment and besides, Diego's no-show wasn't a surprise; obviously someone had tipped him off to my flex down challenge. What a wimp. DIEGO, I'M COMING FOR YOU!

(Diego, buddy, if you're reading this, I'm totally kidding. Heh.)

As for the gym itself, other than using the locally-famous trainers Franco-Behring (Behring having trained possibly the funniest UFC fighter, Anderson Silva) the proprietors couldn't tell me exactly how or why this gym is any better than the other MMA-themed gyms in the GTA (Revolution MMA, Toronto BJJ, Xtreme Couture, etc.), but did say that they are "in the business of training champions." Which is fine, but considering that MMA, even in amateur form, is still totally illegal in Ontario, it's difficult to see quite how that could be. 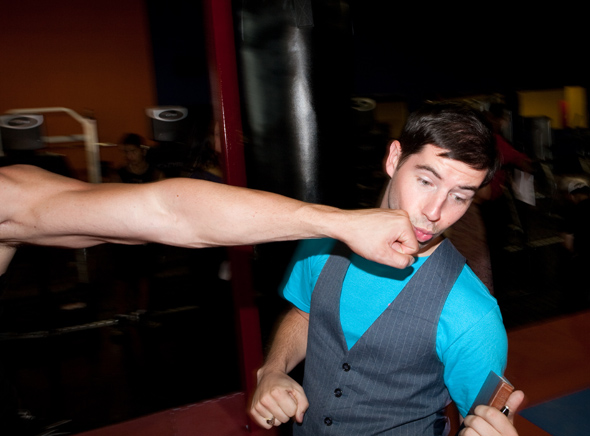 And this brings us back to Sammy and Marco's chutzpah. Despite the pressure put on our government from the UFC, the Ontario and Canadian Mixed Marshal Arts Associations and legions of tough guys everywhere, the future of MMA in Ontario is still very much up in the air, making Paramount Fight Club risky business. The only thing anyone knows for certain is that Diego Sanchez is a little girl who is scared of a writer. 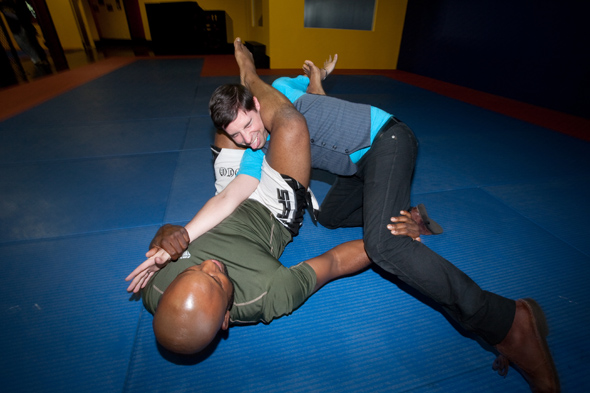 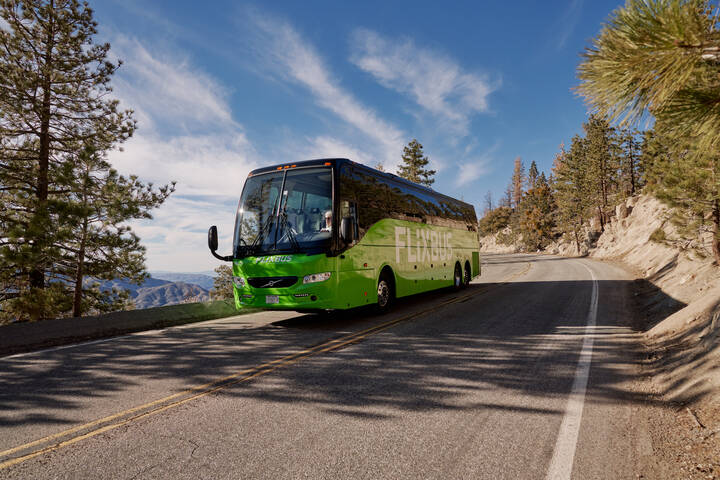