Speed dating. "It's not really my thing, but I thought, Hey! Why not? Life is short!"

Speed dating is something we all know about but probably haven't experienced. Like online dating and other matchmaking services, we think this sort of thing is for "other people". It turns out that this is everyone - everyone involved firmly believes it is out of character for him or her and that they would never normally do this sort of thing. We would put ourselves in this category as well, but like everyone else at Riva Supper Lounge last Wednesday evening, there we were...

The title of this week's GTA Tripping is sort of a lie - while I am the sort of person who would do almost anything once - including speed dating - I wouldn't be caught dead doing speed. Actually, I think if I did speed I would be caught dead, or dying at least, on the sidewalk somewhere with my palpitating heart having a party beside my body. I say "on speed" because for those of us who tend to be on the hyper charged side of the mood scale at the best of times, this sort of thing is compounded in this context. 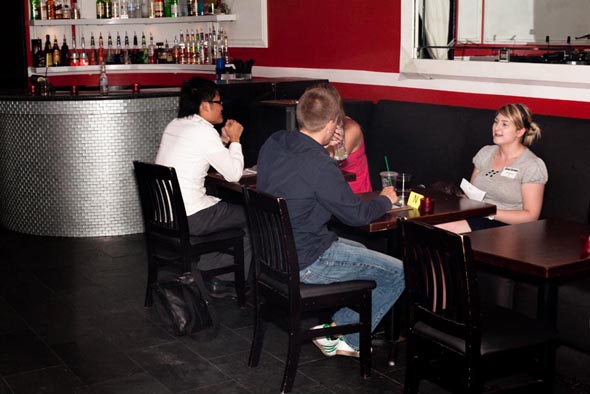 But of course, this is everyone's story. Just as we do when we approach an immigration officer at the airport, we naturally feel a few nerves in front of new people, especially if they have some power over us, or are most certainly judging us. (Remind me to never have a first date with an immigration officer.)

At the speed dating night last Wednesday, hosted by 25dates.com, we only had to keep our "dates" amused for three minutes at a time. The thing about being on a three minute date is that under that pressure most everything you say will sound foreign and weird to you. You'll listen to it exit your mouth and float across the table for interpretation and then sit there, amazed by how boring ("What do you do?"), or whimsical ("If you had to marry an animal, which animal would you choose?") you can be.

I can't say I found the love of my life this night, but it was worth it anyway. Like an extreme sport of a more social type, it was fun and intense watching what people (ourselves included) would say or do under the influence of each other.

My animal marriage question, for example. It's a metaphorical thing and I believe it can reveal volumes about one's tastes and personality. My answer, in case you're wondering, is a cat, because I like independence and coyness bordering on the aloof. It's hot! One of my friends, on the other hand, likes to answer "any beast of burden," because he's not so into dishes. But the poor young woman I posed the question to on this night reacted negatively, stating in a fevered and borderline insulted tone that "you can't marry animals, that's crazy!"

Eventually she got it, and we realized that in fact neither one of us was a raving psychopath bestiality devotee, but just at that moment the bell rang and it was on to the next "date".

So I decided to talk mostly about work. I didn't want to tell people that the reason I was there was to write about it, as that would imply that I was above the thing, detached -- a chin stroking observer. Instead I wanted to be "there". This kind of empathetic charity didn't extend to most of the young women I sat in front of however -- many of them were quick to point out that this was their first time and that they normally don't do this kind of thing. 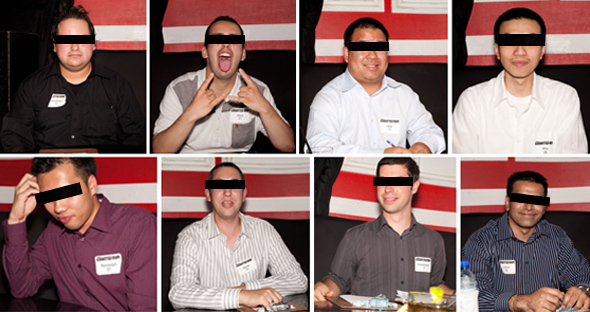 Petia, this week's GTA Tripping photographer, on the other hand, made sure to offer her intent disclaimer right off the bat, much to the chagrin of her parade of eager suitors. "I'm just here to take photos, buddy, move along." (She probably didn't actually say that, she's a sweetheart.)

Determined to do this thing for real, I was sweating buckets, my mouth was on autopilot, and the whiskey wasn't making a dent. My awkwardness was compounded by the fact that each woman's name tag and number (which I needed in order to check "yes" or "no" on my scorecard) was stuck precariously along revealing necklines or lacy camisoles. This had me leering at each woman's chest as I stood up to move on to the next table, trying to find her number before she noticed my eye line.

Being so hopped up, there were many crossed wires and miscommunications (possibly because I may have been foregoing consonants altogether). When I sat down with one charming woman the first thing I said was "Hey! You have your tongue pierced! What's that like?" She spoke about how she used to be a piercing addict, and would bring an apple and a needle to school to pierce the other students' ears. It made a satisfying popping sound, she said, when the needle broke the apple's skin. I tried to hide my horror, but spat out "Did you give anyone any diseases?" She hadn't heard me exactly right and started awkwardly talking about her sexual history, saying that she'd "been to Cancun a couple of times, but probably not...?" She was probably kidding about the STDs, but the bell rang again before we had a chance to clear it up (no pun). 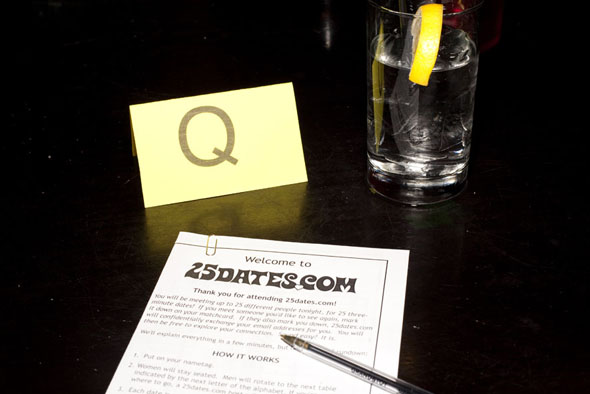 At the next table I didn't have a chance to use one of my stupid opening questions (like "Hey, isn't this FUN?"), instead the young lady began rattling off her pre-planned introduction: "Hi, my name is _____, I'm 21 and I have three dogs, a snake, an African grey parrot, a chinchilla and a tarantula." We talked about talking parrots and when the bell rang to move to the next table she said, "You're my favourite number!" and she was mine, too.

The next woman also denied me an opener, saying simply "Oh, thank God. You're the first white guy I've seen." Next!

Further down the line I met a woman who asked me outright if I liked having sex on the beach. I thought for a moment, eventually admitting that I wasn't sure because I'd never done that before. This information was so shocking to the woman that she lost herself and laughed heartily for a good few seconds, eating into our precious dating time. "R-Really?!" she asked, her bewilderment causing her to stutter. It was as if I'd told her I'd never before breathed oxygen. Finally I told her I once had sex in a field, but she found the idea distinctly less sexy.

By the time I came to the last woman, both of us were clearly defeated. It was nice because we both seemed to admit to each other immediately that there was no hope for us, and so we relaxed a little and enjoyed our three minutes together. I may have misread her ease, however; when I asked if we could take a photo together for this story she said "No. I just met 25 fucking people!" 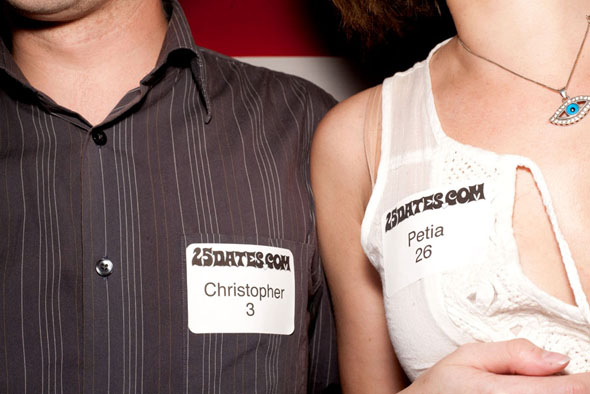 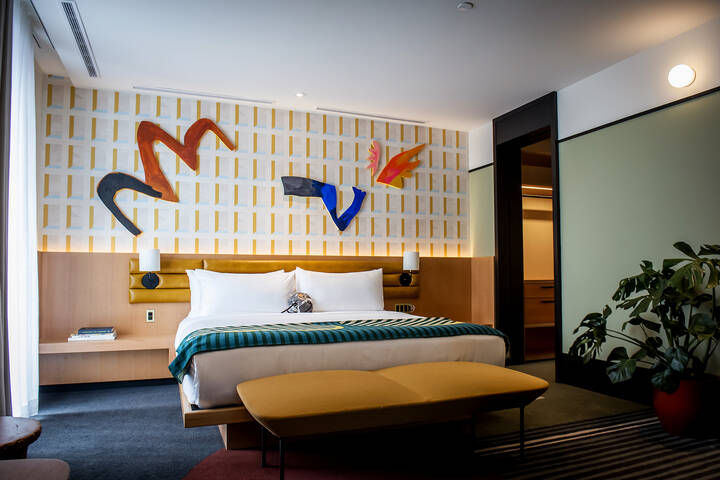