Last Friday morning I found myself at Dodem Kanonhsa' - on the 6th floor of a federal government office tower on St. Clair Ave. East. Each office on that floor featured normal enough furniture and office materials and was full of regular officey people doing regular officey things. But the room I was in had no fluorescent lights, staplers or telephones. Instead, I was standing in a full-blown First Nations lodge lined with glowing cedar planks; the creation legend turtle inlaid in the bright wood floor.

I was surrounded by a circle of chairs, each one holding a person waiting for me to perform the ritual. A 75 year-old Potawatomi elder - Landing Hawk Woman - stood in front of me cradling a shell full of shouldering sage. She was looking at me expectantly, inviting me to perform the ceremonial smudge. The only trouble was, I had no idea what I was doing...

Dodem Kanonhsa', which is the name of the lodge, was established by Indian and Northern Affairs Canada and modeled after Kumik Lodge, a similar center at the INAC offices in Hull, Quebec. Kumik Lodge was created as a reaction to the famous Oka Crisis with the truly and confoundingly under-fought mission of fostering learning and understanding between the two sides - the First Nations people of Canada and people like me, the newer residents. For me, I'd say it worked, I do understand a little more about First Nations people now, but as with all toe-dipping into oceans of knowledge and culture, I was mostly left with more questions. But it feels good to have questions!

My interest in First Nations culture was sparked (or re-ignited) about a year ago when I noticed a denim shirt my grandmother was wearing. The shirt was embroidered with some kind of traditional First Nations design. I asked her about it and she described, knowledgeably and in detail, the nation from whom she'd purchased the shirt. It was a serious "doi" moment for me: Why didn't I know more about the First Nations people of our country? Why hadn't I been taught about their history in school, and why hadn't I learned about their world on my own, as my grandmother had?

The only comforting answer I could find was: There's still time.

This is a lesson that I learned from our host elder today. When JoAnne Kakekayash (Landing Hawk Woman) welcomed us into Dodem Kanonhsa' she opened the sharing circle by sharing the story of her life. She told us that like many of her generation she didn't know so much about the traditions of her people for most of her life, especially the spiritual teachings that had been passed on for generations before her. At the age of 50 she made the choice to learn and practice these teachings. Lucky us! 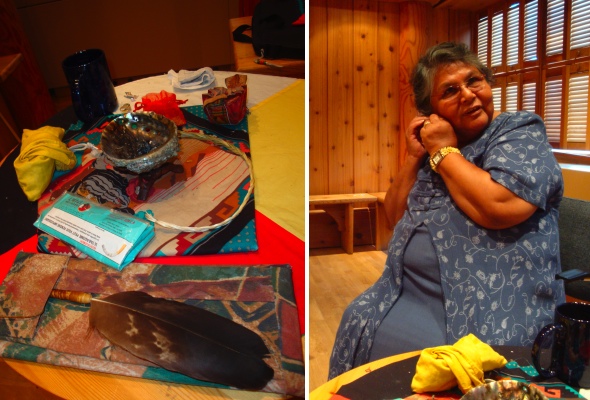 As it turned out, most of the other people there were in a lodge for the first time also, and so they were grateful that I had was the first to be embarrassed by not knowing how to do the smudge. Another woman there, of the Mi'kmaq nation, kindly showed me the ropes.

After each one of us pressed the smoke into various parts of our bodies with the intension of cleansing our spirits*, we began sharing our stories. Being to our host's left, I was first to be handed the eagle feather, which, under the guidelines, I needed to be holding in order to speak. I was nervous and so I turned to my favourite defense, moronic humour. I held the feather to my lips, blew on it twice and said "mic check, one, two..." My joke got a kind chuckle from JoAnne, but then I knew it was time to get down to business and open up, support group-style.

As the feather was passed around, each person opened up to the strangers around them about everything and anything, from serious past traumas to more trivial things to just saying "Thanks."

It was inspiring and humbling to hear what each person had to share, but when the feather would land on one of the three First Nations women in the circle, we all learned a whole lot. JoAnne, especially, shared a great many stories from her own life and related each one to the spiritual teachings of her people. And then she did the same for our stories, sharing tidbits of wisdom that seemed to speak directly to each of us and to each of our experiences.

I should say that in general I'm not a touchy-feely sensitive type in groups like this, but by the end of our session we had all hugged each other and felt genuinely connected to one another in a very sincere way.

If the sharing circle sounds like too much for you (it almost was for me), the lodge offers other events, including a drum circle session every Monday morning at 10 AM. But whether you're hitting a drum or waxing about your childhood, the real benefit of attending Dodem Kanonhsa', or the Native Canadian Center of Toronto (the two are affiliated) is having the chance to meet the elders, hearing what they have to say, and then watching yourself transform. 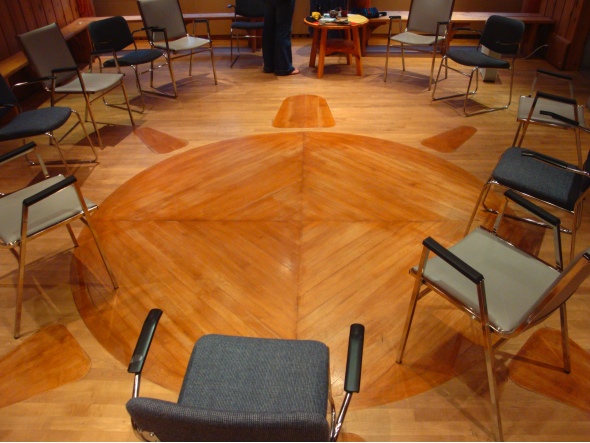 (*Personal Note: I can't say whether or not I have a spirit with any certainty but I can say the smoke smelled awfully nice.)