I cannot do long division, and it feels great. In sixth grade we were finally allowed to use calculators in math class, and from then on long division and I have been happily estranged. I can long-divide a pitcher of beer, but that's about the extent of my usual relationship with math and science.

But then I heard that on the first Thursday of every month the University of Toronto's Department of Astronomy and Astrophysics offers a free talk and tour to the public, and so I paid a visit to my old enemy.

A math-hater attending a lecture on Einstein and astrophysics may seem a bit random to you, but please allow me to explain my motivation. I am so addicted to distracting myself from my work that I will leave my house for pretty much any reason at all. For example, if I'm working on something like this column, suddenly I'll think, "I need some milk!" and then I'll go buy some, despite the fact that milk is probably the grossest thing I can imagine. (Though, let me see here, *knuckle crack*... Fermented menstrual hairball! Yeah, that's worse.)

This month's tour at U of T featured viewings of the moon, Saturn and the M51 Galaxy through telescopes. The title of the talk was "Einstein's Theory Under Scrutiny." It sounded distracting enough. 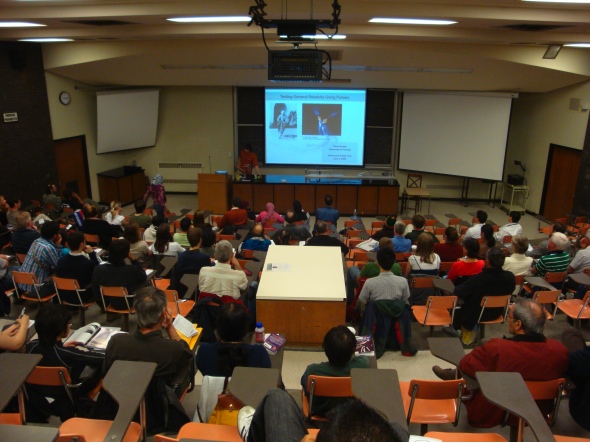 We arrived at the McLennan Physical Laboratories building on St. George Street last Thursday night just in time. Both my friend and I made a beeline for the back row of the classroom. We hadn't gone to school together, but we now had a mutual understanding about each other's academic past. Spitballs over Dean's List.

The talk was given by a young and dashing turbo-nerd named RenĂŠ Breton. Dr. Breton, we were told, had recently received his doctorate from McGill University, and his thesis had made a significant contribution to science.

He looked like someone I could long-divide pitchers with, and so I listened, wondering how long it would take for him to blow my mind. About 45 seconds into the lecture, about when Dr. Breton was pointing at a colourful PowerPoint slide showing that famous apple falling on Newton's head, my partner started to make paper airplanes.

Maybe it's because I'm secretly brilliant (fingers crossed!), or because I suddenly felt braininess competition from the young children listening thoughtfully next to me, but either way I was hooked. RenĂŠ had me, and guided me by the hand from Newton to Einstein to his own work, using pulsars to run Einstein's General Theory of Relativity through the ringers more rigorously than ever before.

I tried interpreting the talk for my friend, who was suffering a serious attention span drought. My translation went something like this: "Einstein said that Newton's stuff isn't right when stuff is moving really fast. This guy is saying that Einstein's stuff is good still, after 100 years, and that that's totally sweet. He's using star corpses really far away to test Einstein's stuff and so far his stuff is still cool, but maybe it wont be soon, or something."

Because I am a child mentally, the greatest impression I took away from the talk was Dr. Breton's description of pulsars and how badass they are. He got my attention when he said, "these are extreme objects!" I put up devil horns and started head banging to my own heavy metal soundtrack while he told us about pulsars.

My next metal band will definitely be called Pulsar. 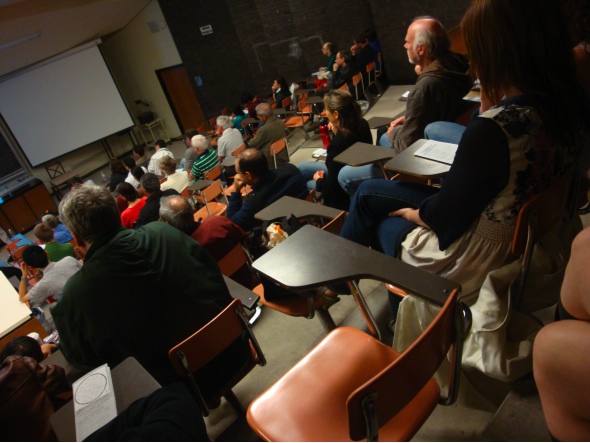 The audience here was disparate and diverse. We were kids, the grey and crotchety, astro-students, strict and hopeful parents forcing their children to ask questions and us. After the talk we all came together as one people, united. Free doughnuts, I'm sure now, could bring peace to the Middle East.

After we had done our duty and rid the campus of ever last spec of icing sugar, we headed upstairs for the tour part of the evening. 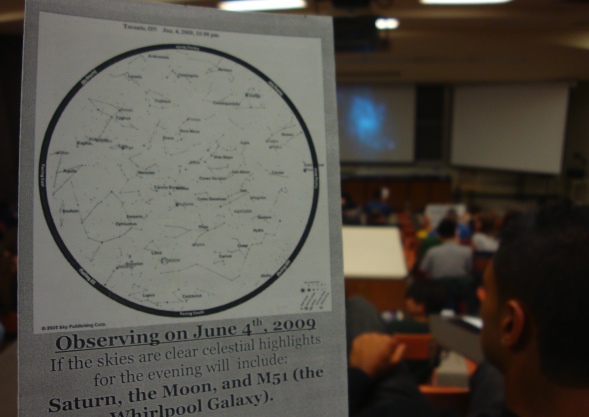 First it was outside onto a fresh air patio high above the city, where we found several modestly sized telescopes. We tried looking through one, and when we couldn't see anything we tried moving it around. "Where do we put the coin?" we joked to our graduate student guide. She grimaced at us and set to work fixing and re-calibrating the telescope, which had been meticulously set on the moon before our manhandling.

I wanted to see me some Saturn anyway, so we went upstairs to the largest telescopes. In the stairwell on the way up we heard some flute noodling sounds wafting through the building. Opening the door on the top floor, we found 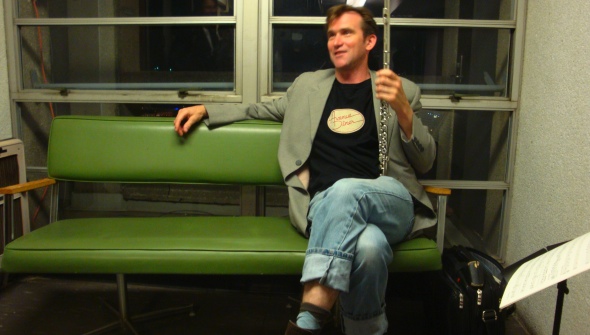 a man playing for the captive audience lined up for the telescopes. It was a nice effect, the pure celestial tone of the flute playing epic sci-fi melodies in this celestial-themed atmosphere.

Waiting in the line-up for the biggest telescope I was giddy. I had never seen the rings of Saturn for myself, and I was genuinely thrilled at the prospect. I was imagining desktop wallpaper-caliber close-ups on the planet; its asteroid-belt rings in clear view, the atmosphere swirling in romantic reds and browns.

At the eyepiece I totally faked it. Like our sitcom girlfriends have always been doing for our benefit - because they are polite, because they don't want to hear our paranoid whining - I faked it. All I could see was a blurry white dot. The graduate student guide stood there, asking "can you see it?" and so I oohed and ahhed like an asshole. 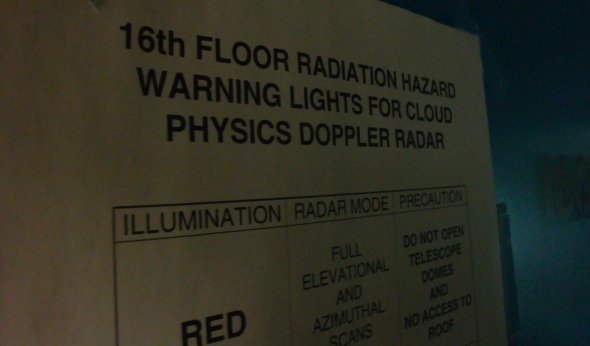 The tour was fun, as it always is hanging out somewhere after hours, but I wasn't quite satisfied. I wanted planets all up in my eyes! The David Dunlop Observatory in Richmond Hill, opened in 1935, is the silver tuna of U. of T.'s astronomy and astrophysics department. For many years it had the title of second-largest telescope in the world, and remains today an important center for its work with radio waves from space. I knew I had to extend the tour.

The David Dunlop Observatory doesn't offer public tours these days (it has in the past), but I thought that if I went out there I could work some kind of charm and make something happen. And so my girlfriend and I headed out to Richmond Hill on public transit the next evening.

The trip was a total disaster. The transit system was confusing, and it took us a lot longer than we'd anticipated to get out there. By the time we got close to the place, it was pitch dark. Having lived so long away from the suburban car-oriented world, it was bizarre to be in a place where there were absolutely no people on the streets anywhere. Bizarre, and honestly kind of frightening; how did I survive my suburban youth without getting murdered? I wondered.

By the time we got to the desolate stretch of suburban street approaching the David Dunlop Observatory, both my girlfriend and I were terrified. I should mention here that we are naturally ill equipped for this sort of adventure; any normal couple would have probably been fine. You see, my girlfriend is afraid of everything including, but not limited to, statues and all living animals. She wore a special Buddhist bracelet to bed just last night in order to cure herself of a curse she believes she is suffering from. I, on the other hand, am just your average, run-of-the-mill pansy.

It was almost a comedic level of fright. The moon was full and yellow and classically obscured by wispy clouds. The temperature was dropping and there wasn't a sound around us except for the odd menacing car rolling slowly, each one transporting murdering vampire molesters. We could have been killed out there and nobody would have noticed - everyone was inside watching TV! 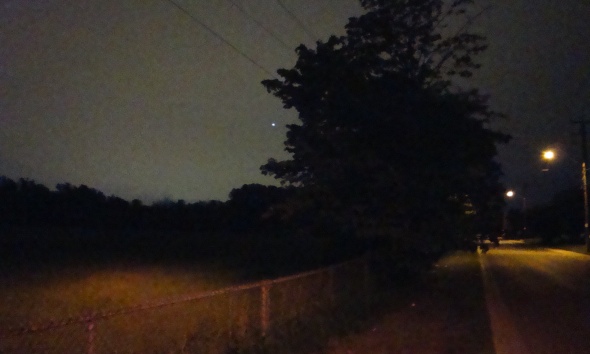 We were about 100 meters away from the observatory when the terror became too much. It was like when you were a kid running upstairs from the basement after turning the lights off, sure that something was going to grab your ankle. I'm certain I reached my top land speed running up those stairs as a kid. And so we ran like hell. Irrational cowards, the two of us.

It was for the better, probably. Had we actually made it all the way to that 74-year-old observatory and stood in its foggy moonlight shadows, the trees rustling in the cool black wind around us, we probably would have fear-fainted anyway. Next time we'll go during the day, and wait safely inside for the blue celestial curtains to part, revealing all of our extreme space objects dancing in that infinite blackness.