"North Korea" is what the funnier members of the local Korean student population call Toronto's second and newer Koreatown. Like you, I'd love this to be a report about a trip to Pyongyang where I played beach volleyball with Kim Jong Il and his homeboys, but unfortunately the mysterious state lies outside the stretches of Toronto's public transit system and thus beyond the scope of this column. But not to fear, "North Korea" with the quotation marks is almost as boss.

Located at Yonge and Finch, the neighbourhood is interesting to GTA Trippers primarily because it offers a much more authentic Korean experience versus the older Koreatown located south at Christie Station ("South Korea," get it?). 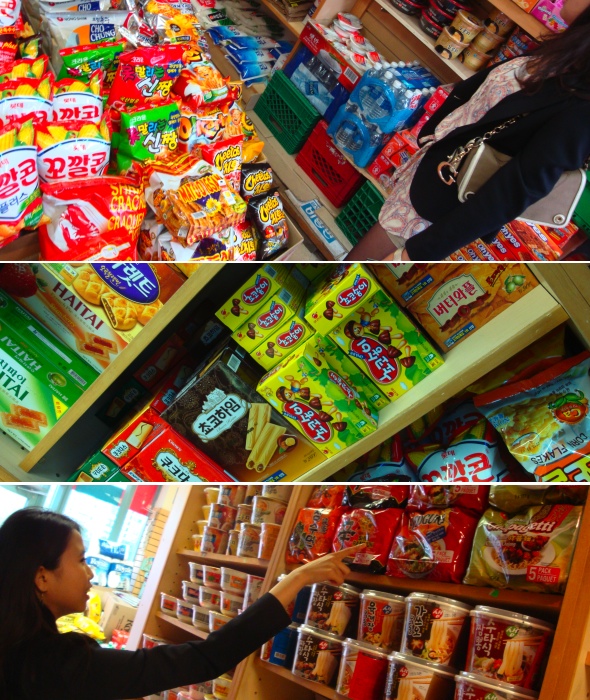 Authentic, however, like its friends unique or different, is not a judgment adjective. Describing a place as authentic means only that it replicates with some straight and true diligence the thing that is being replicated, and leaves the good-or-bad up to you. With its gleaming modern high-rise apartment buildings overshadowing wide boulevards full of singing rooms, PC rooms, private DVD rooms and a slew of restaurants all patronized by a stylish and tight-knit people, Toronto's own "North Korea" couldn't be more Korean. Which, to my mind, is a very good thing.

Often a culture is at its most potent at the dinner table and so we chose to begin our tour at a restaurant. Calling a friend who lived in the neighbourhood, my Korean travel partner got a recommendation: a place called Toong that we just happened to be standing in front of. Walking in, I was greeted by the sound of sizzling meat, said "Yo!" to by the smell of kimchi, and high-fived by the realization that I was the only non-Korean in the joint. I know you're with me on this: walking into an "ethnic" restaurant and being the only non-whatever there is a sure sign of good food. Errr, authentic food, anyway. 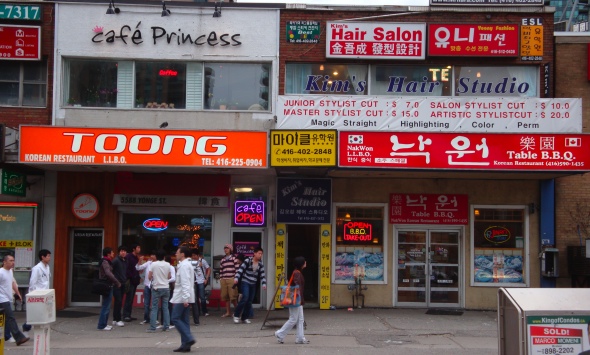 What was even better than the authenticity of the food here was the authenticity of the prices. The biggest complaint Koreans or those who've traveled to the country (or taught ESL there, as is probably more likely) have seems to be that they find it hard to pay the much higher Canadian prices for things that used to be staples. If any Korean people are reading this: where are you hiding your glorious $2.50 packs of Marlboros?

At Toong we were able to get two huge orders of dweji galbi (grill-it-yourself pork ribs) for just a couple bucks beyond what they would be in Korea, at $12 each. This is a huge break, and with the plentiful and top-notch side dishes (including a full order of soondubu chigae or dwenjang chigae - soybean stews, in soft curd or fermented paste, respectively) makes this meal an unfuckwithable steal for the Canadian visitor. 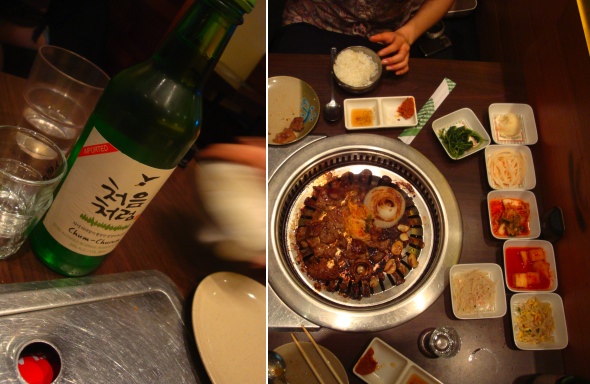 Unfortunately, there are no breaks on the soju here; the normally-$3 spirit finds itself in the mid-to-high teens on Toong's menu, which, if you've ever tried the stuff, is grossly overcharging.

The meal felt exactly as I remembered it from my own travels in Korea: searing pork fat, burning red-pepper paste and face-flushing shots of soju swirling into a satisfying and smiley mix.

We followed the meal up with a stroll when we discovered just how wide a slice of the homeland this Toronto neighbourhood represents. Like its Christie counterpart, we found plenty of karaoke rooms and PC rooms, the latter being just as authentic as the restaurant in that the patrons are still hooked on Star Craft. 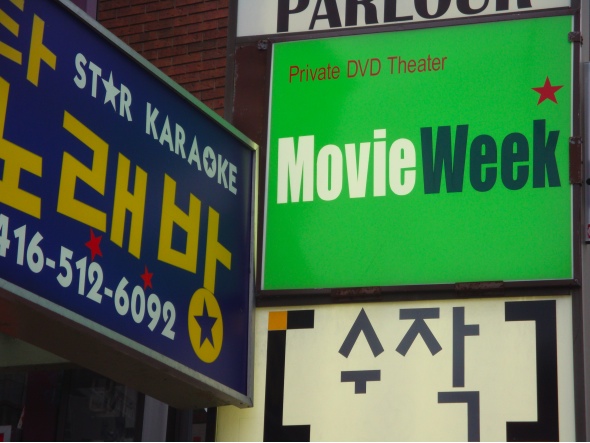 And then we saw it - Toronto's lone (to our knowledge) DVD room. In Korea, all of these rooms - and especially the DVD room - are essential for the social and romantic lives of a population of twentysomethings who usually live with their parents until (and sometimes beyond) their wedding days. Though the DVD room is advertised as a private screening theater offering audio and visuals better than you'd have at home, what it really offers is more privacy than you'd have at home. And conveniently, like Operation Iraqi Freedom or 15 Free CDs!! "You wanna go watch a Woody Allen movie?" sounds a lot better intended than it really is. It is my silent hope that the Korean Wave will result in these places popping up on every block in Toronto.

For being just a small collection of businesses in a residential part of northern Toronto, the Yonge and Finch Koreatown packs a seriously potent pleasure-punch. Until next time "North Korea," Anyonghikaesayo! 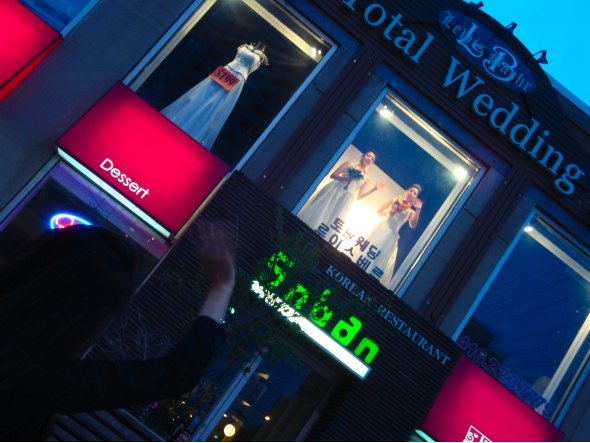 With thanks to Hye-jeong Heo.