Ever since I heard about the wild Godgasms going down at the Toronto Airport Christian Fellowship, first through Peter Mettler's 2002 documentary Gambling, Gods and LSD, and then again on Law and Order: SVU, I knew I had to visit the church myself one day. As a tourist.

Through the 1990s, people flocked (and bleated) from all over the world to the Toronto Airport Christian Fellowship to be a part something known as "The Toronto Blessing," which is what the British characterized a series of mysterious events taking place in a church in Mississauga, namely ecstatic experiential "encounters" with the Holy Spirit. Things like "holy laughter," barking, whooping, flailing about on the floor (the actual term is to be "slain in the Spirit"), and so on.

Hoping for a little Sunday morning action, my pal and I took the bus from Kipling station to Pearson Airport, and then another bus (the 58 Malton) a few minutes further to the global headquarters of the TACF for their 10am service. 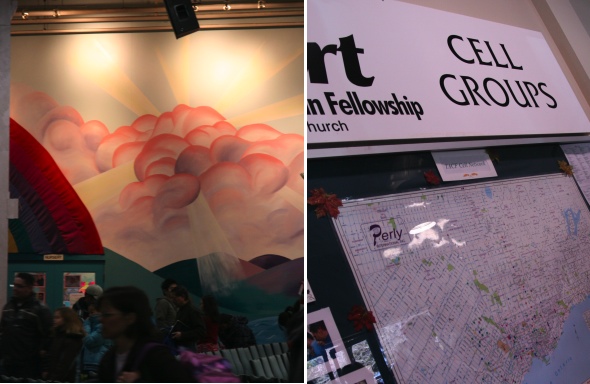 Locals John and Carol Arnott created the TACF in the late 1980s after witnessing some of this "holy laughing" thing on a trip to Argentina.

Since then, the Arnotts have become big fans of the Godgasm and even invented some variants of their own, including a practice called "soaking," and Carol's own "Sword of the Lord" anointing (which came to her suddenly one day after a 20-minute freak-out on the TACF's stage), wherein parishioners grasp an imaginary golden sword above their heads, swing it wildly, and bellow out war cries.

These prayer moves spread like a hot new dance craze to other revivalist neocharismatic evangelical churches, and have even inspired others to set up similar ministries around the world in places like Bath, England and Pensacola, Florida. These, in addition to the eight (soon to be nine - look out Scarborough!) - chapters of J&C's own Spread the Fire ministries that already exist all over the GTA.

But the Arnotts' influence hasn't stopped there - their operations are now global, with mission work being done all over the world through Catch the Fire ministries, yet another offshoot of the TACF. A video on the CTF website cuts between images of African children jumping at the camera and/or looking dejected, and the words "Every day, over 33,000 Africans die of hunger and starvation. Every day, over 23,000 Africans give their lives to Jesus. The harvest is plentiful, but the laborers are few - Matthew 9:37."

The venue itself looked massive, with seating for hundreds and a giant cartoonish Noah's Arc decorating one wall. The light was soft and glowing, and people were sitting on the carpet, praying on their knees, lying about in what looked like righteous nap-time, while others roamed the crowds waving silver and pastel flags. 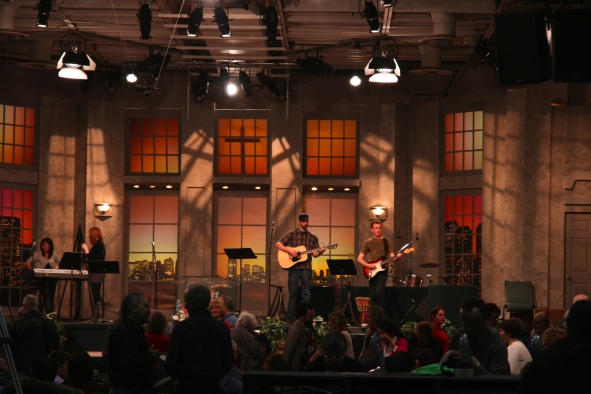 A wash of acoustic suspension-rich wallpaper music emanated from the TV studio-like stage at the front of the room. The temperature was warm and the people looked happy. It was almost too much to take.

After another 20 minutes of acoustic drone, a spry twentysomething blonde woman/girl got on the mic and started a kind of free-flow toasting and mention of massaging angels. Between phrases she punctuated her piousness with seemingly involuntary Huhs.

This went on for days and made no syntactic sense whatsoever, but was promptly followed by an engaging series of announcements. First it was a video plea from founder John Arnott, asking for 1000 parishioners to "prayerfully" consider donating $1000 each ("or $100 every month over the next ten months") to the church for roof repairs.

Then our MC reminded us of upcoming events, and workshops like "Freeing yourself from Freemasonry." In two weeks time, the MC herself would be hosting "Chastity For Chicks." Oh praise the mighty Lord in heaven!

Next up was the main course: an epic sermon by TACF Mamma Carol Arnott. The theme of the sermon was "Be like Joseph." It was a thoughtful, engaging, and sensitive deconstruction of the story of Joseph, how he had been Jacob's favourite son, got that sweet rainbow coat, how his brothers jealously betrayed him and he forgave them.

I actually thoroughly enjoyed the sermon, but did so using my favourite church-coping technique, which I will share with you now.

I like to pretend it's one big, super-zealous book club. Like these bookworms meet every Sunday because they just love the literature, and can't help but discuss it. It really works, though by the end I always wish they'd move on to other books... imagine hundreds of people gathering together in a massive building near the airport on a Sunday morning to discuss The Great Gatsby. "Be like Carraway," she'd implore, and we'd all nod in agreement, thinking, "Yeah, he was a nice guy."

Unfortunately my fun bubble was mercilessly burst by Carol's Golden Sword just following the sermon, when she finally dropped the bomb: "If you haven't accepted Christ as your personal saviour, can you honestly say that you'll ascend to heaven when the judgment comes? And it is coming."

The old eternal damnation ultimatum is never a cozy feeling for the non-devoted churchgoer, so we took our leave, passing a potent and revealing painting in the lobby we had missed on the way in.

The painting depicted the very building we were standing in, in a moment just before it is obliterated by an apocalyptic tidal wave, releasing the sighted parishioners into the eternal blessed afterlife at one of Gatsby's legendary parties. 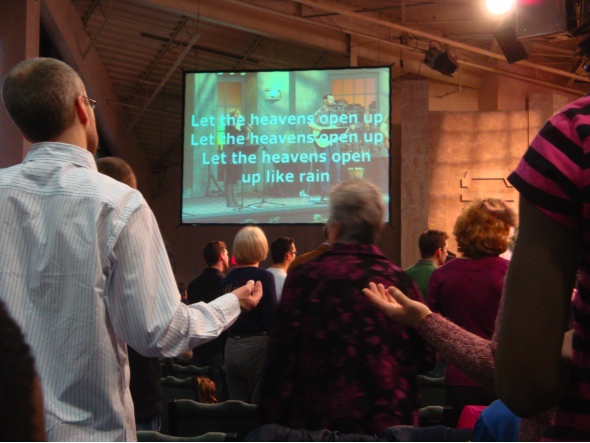 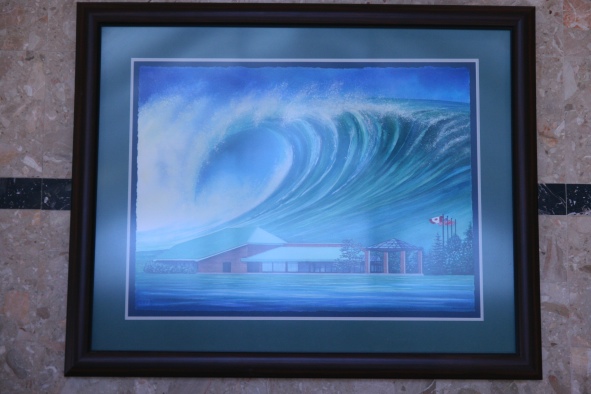