Robert E. Sherwood's 1936 play Idiot's Delight is a unique one to be sure. Part romantic comedy and part harbinger of war, the play's focuses often battle for top billing. Sherwood himself was aware of the duality, once confessing to his contemporary Lucius Beebe that, "The trouble with me is that I start with a big message and end up with nothing but good entertainment."

Soulpepper's production, directed by Albert Schultz, attempts to oscillate between the comedic narrative and the impending doom. Where the revival ultimately falters is in leaning on the lengthy hotel drama in the hopes that it will resonate with contemporary audiences. The dialogue heavy scenes drain the play of significant momentum, which ultimately undercuts the intended love story and the well-staged final plot pieces.

The guests at the Hotel Monte Gabriele are an odd collection of travelers from across the continentâa German scientist working to cure cancer, a young, newly-married British couple, an infamous arms dealer and his mistress, a communist revolutionary, and a troupe of performing 'Blondes' and their boisterous manager. As Europe begins to mobilize into international conflict, the effects of which are felt just outside the hotel, a past romance boils up from the surface.

The intended cross-section of European and American characters helps carry the themes of war into the social hall of the luxury hotel. In addition to the Italian officers, Quillery (Gregory Prest), the communist seeking peace, and war profiteer Achille Weber (Diego Matamoros) are the most overt realizations of those invested in the impending struggle. The other characters are drawn into an opinion on what may or may not come marching up the hill. 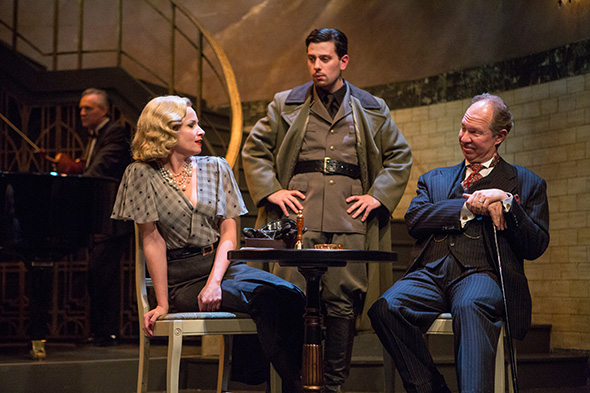 Aside from the charming characterization of an aloof British couple (Gordon Hecht, Mikaela Davies) and a sweet Austrian (Evan Buliung) turned Italian by rezoning after the first war, the banter and philosophizing, while full of interesting ideas, weighs down the scenes, making it difficult to enjoy the cat and mouse memory game between the affable Harry Van (Dan Chameroy) and mysterious Irene (Raquel Duffy).

The result is a drama that feels more like a time capsule reflecting the prevailing thoughts of the moment, rather than a fresh and still potent commentary on our response, or lack thereof, in the face of conflict. And because the underlying tension draws so much of our attention ("Pennies from Heaven" doesn't sound so right after a likable character is murdered off stage), it's difficult to really invest in the hint of loving reconciliation.

There are a number of performances that elevate the drama. Chief among them is Buliung, as a sympathetic waiter who says very little but is instantly the most interesting character. Prest is captivating as the fiery intellectual and Chameroy and Duffy have warm moments as the couple at the centre of it all.

In the final scenes, Schultz attempts to leave us feeling the chill of war, through clever staging that emphasizes the tension between the comedic and dramatic, but its not enough to overcome the drawn-out digressions and contradictions that came before.

Idiot's Delight, written by Robert E. Sherwood and directed by Albert Schultz, runs at the Young Centre for the Performing Arts until March 1.