Flesh and Other Fragments of Love wows at Tarragon

At the centre of Evelyne de la Chenelière's Flesh and Other Fragments of Love lies the pale, lifeless corpse of a young woman which has washed up on the beach of an Irish vacation village. The body presents less an invitation into the events that led to her demise and more an entry point into the relationship of a married couple transfixed by her discovery and by that which she represents.

The playwright's deeply poetic and arresting dialogue explores the unspoken tensions of jealousy and infidelity that boil beneath a long marriage. While sometimes obtuse and mired in its own personal journey, the language of the central characters portrays a compelling and human portrait of the contradictions of love. It soars when at the extremes of the spectrum, devotion and denial, but feels bogged down in the in between.

A couple's already strained vacation comes to a halt when Pierre (Blair Williams) discovers the untouched corpse of a young woman named Mary (Nicole Underhay) on a solo walk along the coast. For his anxious wife Simone (Maria del Mar), the young woman represents the outside-of-marriage fascinations which have continually stolen Pierre's attention. Together they piece together the events which led to Mary's resting place, a performance that reveals more about their own preoccupations than that of their subject.

de la Chenelière employs an inventive narrative structure to reach the root of Pierre and Simone's partnership. The characters deliver uninterrupted monologues to one another, revisit scenes from their relationship together, and attempt to uncover the mystery of Mary's death by performing invented scenarios. It results in a rich, but sometimes hard to follow, exploration of their shared history. 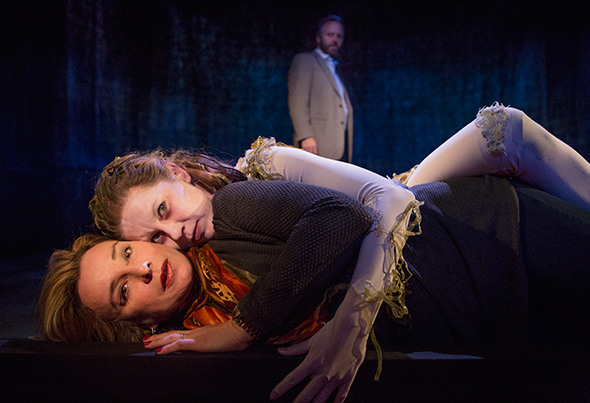 Their confessions -- about freedom, jealousy and all-consuming dependence -- are poetically penned. de la Chenelière has a wonderful grasp on language, matching potent visuals with their corresponding emotion (credit also due to translator Linda Gaboriau). These reflections are sometimes so deep that we become lost in a torrent of words, losing sense of the true meaning.

Director Richard Rose helps uncover the unique dialogue placing Pierre and Simone in orbit of Mary's body. While there is initially enough room to accommodate their musings, the staging becomes less dynamic as the play progresses -- the characters break into Mary's dramatic space but with little impact.

Williams and del Mar are well matched in the discussions of freedom and devotion. As a curious and intellectually driven hedonist, Williams is equal parts charm and revulsion. del Mar delivers the most emotional impact as a woman searching for dependency.

de la Chenelière's tale, adapted from Marie Cardinal's novel Une vie pour deux, is an intellectually challenging and poetic study of long term love, set under the microscope when death intervenes. It resonates with human yearnings that are as relatable as they are opaque.

Flesh and Other Fragments of Love, written by Evelyne de la Chenelière and directed by Richard Rose, runs at the Tarragon Theatre until February 16.