Moss Park a well-timed look at struggle in Toronto

It's no coincidence that Rob Ford can be seen on the flap of a newspaper peeking out of a trash can on the set of George F. Walker's Moss Park. While the characters in the play never struggle with substance abuse (or maybe more accurately, never struggle admitting their substance abuse), it's a tale which ruminates on the city's socio-economic challenges, what it means to pursuit a life of crime, and how one rises above a dire, seemingly impossible situation.

The play benefits from terrific timing. It reminds that, while the scandal circus continues, the city's ails continue to fester. While at present it may be impossible to separate the very Toronto feeling play from the city's own theatre, taken on its own, the narrative never really lands an impactful punch. The sharp dialogue is elevated by Haley McGee, but she's one of the only bright spots from the resulting hour of park discussion.

Bobby (Graeme McComb) and Tina (Haley McGee) are doing their best to survive. After Bobby is fired from his delivery job, Tina sits him down in Moss Park to consider their options. With a little girl to support and major roadblocks on the horizon, the two examine every potential scenario in their quest to surmount the challenges.

The play is a followup to Walker's 1994 Tough!, which featured the same two characters in similar circumstances. The difference now is the responsibility of an extra mouth to feed, which presents a very real challenge to financial sustainability.

What Walker does well is ensuring the characters are compelling. He has sketched fully-formed, down-and-out youth who you cannot help but root for. Each is able to identify what's holding them back, which helps to move along the narrative, but doesn't exactly raise the conflict level. 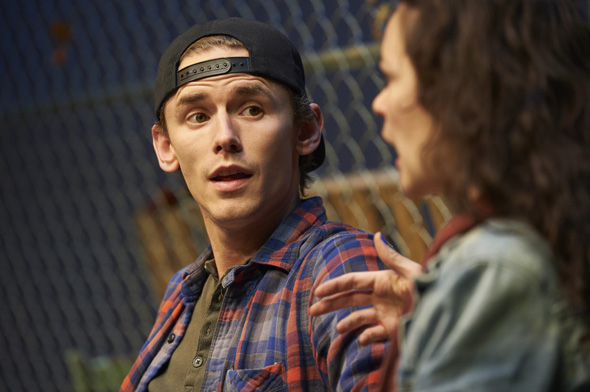 The inevitable drawback is that their wholesomeness makes everything a bit too neat â the way they debate, the description of problems, and the eventual conclusion â don't do enough to raise the stakes. And the trying on of a criminal life, a yarn that's spun for a good ten minutes, never really feels plausible.

Director Patrick McDonald and set designer Martin Conboy have transformed the Theatre Passe Muraille stage well, masking the tricky pillar as a park lamppost. One weakness in McDonald's production, spoken from my vantage point in the stage left balcony, is that the sightlines for this unfortunate group of viewers are atrocious. While I understand that these aren't the best seats at the lovingly unique TPM, all the pivotal moments took place on the stage left park bench, as opposed to the one conveniently positioned centre stage.

McGee navigates the show from start to finish, conveying Tina's inner struggles while never losing a solid foundation. McComb plays Bobby's "unable to grow up" traits well, but isn't able to push back at the level McGee needs to keep things tight.

The two characters have a lot of heart, but a lack of grit means the play never journeys to the darker recesses of the park.