Tim Luscombe's Pig is positioned as a play that interrogates the normalization of gay sexuality — monogamy, marriage, adoption — by exploring the antithesis of these traditional structures in dark, seedy places where sexual expression has no bounds. Truly, there are no boundaries in the scenarios enacted by these characters.

In doing so, the playwright attempts to contribute to an important dialogue about sexual expression, in which acceptance gives way to love in all different shapes and sizes. It becomes problematic, however, when, in far-reaching extremes, the characters in control are so driven by their need for pleasure that they cross, not the line of sexual taboo, but the line of reason. In the name of love, they attempt to murder.

After hooking up online, Joe (Paul Dunn) and Stevie (Blair Williams) begin a tumultuous relationship founded on their mutual enjoyment of charged, trangressive sex. Both men are budding writers (almost every character it seems has writing aspirations) and soon their sexual pursuits become blurred with that of their alter egos Knife and Pig, as well as the fictional characters in Stevie's play, which includes a lecherous Larry (Bruce Dow). Like a bathhouse maze, the narratives twist among themselves so that it's difficult to determine, at times, whether we're following the original characters or their fictional counterparts.

There's no doubt the play is challenging and will inspire great discussion. But its provocative nature does not make up for poorly constructed characters. Stevie and Larry, in control for most of the action, never reveal a convincingly human, empathetic side.

Brendan Healy, who has directed a string of excellent productions as Artistic Director, chooses a minimalist approach to staging and set design that seems at home with the text. I disagree with his claim, however, that the play is a strong statement in opposition to normalized sexuality. He states, "These days our culture seeks to normalize gay sex...Luscombe, however, takes some of the darker aspects of gay male sexuality and, instead of labelling them as harmful or deviant, treats them as expressions of love." 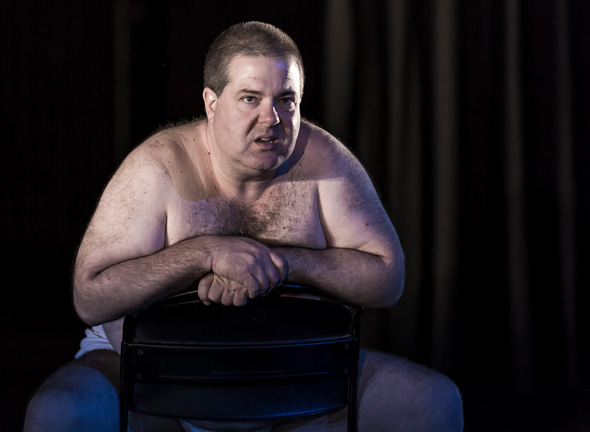 The play does explore these themes through the character of Joe for whom dark, sexual discovery runs in opposition to the normative. But when characters like Knife and Larry indulge in rape and murder with non-consenting parties, the conversation turns from sexuality to harm. It's unfair to lump these characters in with promiscuous, liberated men who push sexual boundaries and are sure not to harm others who do not want to be harmed.

A more appropriate reading of the play is one that considers acceptance of sexual expression, yes, but also one that recognizes extremes of sexual behaviour — that sex can lead to murder for one — and what these behaviours reveal about human nature. The dark places depicted are too far removed to be in dialogue with gay marriage.

Ironically, the most interesting character is the least sexual. Harry, the gregarious friend in love with Joe, steals just about every scene. It's a testament to Dow's incredible talents, an ability to jump from comedy to tragedy at the drop of a hat, but it's more that he's the most well-rounded character. His human side is exposed in his unrequited, pathetic love for Joe.

Dow is mesmerizing throughout; his characterizations never waver. Alongside, Dunn commands our attention as the object of affection. He's able to temper vulnerability with a quiet, flirtatious confidence. Williams doesn't ever seem sure of footing with Stevie or Knife, but it might be that Luscombe hasn't given these characters enough due. Stevie/Knife, after all, is the narrative engine.

Provocative though it may be, below the surface is a muddled play improperly positioned as a response to gay normalization. The practices depicted here, some of which hinge on consent not given, tread far beyond freedom of sexual expression.

Pig, written by Tim Luscombe and directed by Brendan Healy, runs at Buddies in Bad Times Theatre until October 6.