There's a reason why Tony Kushner's Angels in America is hailed as one of our best contemporary plays, maybe the most notable in the last two decades. Like a seasoned conductor, the playwright expertly navigates an orchestra of characters in and out of the social and political arenas into which they venture. The narrative that results, like rich and complex music, hits all the right emotional and intellectual notes.

There are a number of metaphors that reach close to describing how brilliantly the play is composed, but ultimately it's a performance that must be seen and heard. Soulpepper's generous production, for it is generous to mount the ambitious two part, six hour epic, does justice to the spirit of the text, a text that feels as relevant now as it was when first produced in 1991. Director Albert Schultz and his protean cast find the very best of the incredibly human and flawed characters that inhabit Kushner's Gay Fantasia.

The drama is organized around three storylines that confront the sexual politics of the Regan era: Prior Walter (Damien Atkins) and his boyfriend Louis (Gregory Prest) attempt to come to terms with Prior's HIV positive reality; the marriage of Joe and Harper Pitt (Mike Ross and Michelle Monteith) cracks down the centre when Joe gives over to his sexual desires; and Republican bully Roy Cohn (Diego Matamoros), alone and despised, save for the ghost of Ethel Rosenberg (Nancy Palk), masks his AIDS diagnosis as liver cancer. The characters wander in and out of each other's realities, all a part of a seemingly divine narrative which brings them together.

The Soulpepper production is a faithful treatment of this landmark work. Akin to directing Shakespeare, Schultz reveals an experienced hand navigating the demanding text. With marked changes in mood and style with an underlying, almost biblical cadence, the play feels light and quick during part one, Millennium Approaches. No easy feat given it's a three hour production. 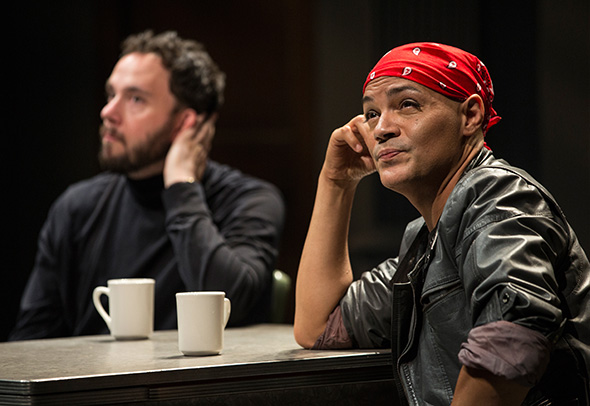 Part two, Perestroika, is a little more uneven, weighed down by bouts of angel rhetoric that impede the very progress Kushner pushes for. But it's here where the themes of forgiveness, love, and justice blossom. While there are many scenes that can be held up in high regard, the delivery of prayer from Prest and Palk in Cohn's hospital room is one of the most memorable.

Atkins is a grounding force as Prior, finding the character's wicked sense of humour and almost crippling vulnerability. In many ways, he's our guide throughout. We learn about the disease through his eyes and approach the hallucinations and angelic visions with the same bewilderment. Prest channels Woody Allen to great effect for the poetically waxing, cerebral quality of Louis' musings.

Matamoros holds every scene as the acid-tongued Cohn. His interactions with Ross, of quasi-fatherly proportions, are some of the most complex given the varying degrees of their sexual repression. Palk plays a number of characters convincingly, most notably Hannah Pitt, a nuanced, subtle performance.

Together with Set and Costume Designer Lorenzo Savoini, Schultz carves out a world all its own, where light and papers rain down from the sky and the range of different settings include Antarctica, a Mormon visitors centre, and somewhere between a dream and a wish.

It's a play, in its sprawling, epic themes, that reminds us how complex, enchanting, and, above all, fleeting our time on the globe is. This is the very best type of theatreâone that inspires us to be better than we currently are.

Angels in America, written by Tony Kushner and directed by Albert Schultz, runs at the Young Centre for the Performing Arts until September 14.