The Book of Mormon is funny as hell

Trey Parker and Matt Stone have made a career out of jaw-dropping satire that explodes beyond the boundaries of "taste" offering a wildly comedic take on the stranger qualities of human behaviour. Organized religion, particularly the American founded Church of Jesus Christ of Latter-day Saints, has always been a target at the top of the list. Thankfully for theatre audiences, the mischievous twosome is enamoured with sharing their observations through music.

While admittedly preened with hype, The Book of Mormon fulfills its mission, delivering hilarious and clever commentary through songs that exude mirth and merriment. It's soon to convert an army of devoted doorbell ringers during its short six week run in Toronto.

After completing three months of Missionary Training School in Utah (where else?), Elder Price (Mark Evans) and Elder Cunningham (Christopher John O'Neill) are paired together and shipped to Uganda to spread the word about the all-American Big-Box Christ, Mormonism. It's an odd couple scenario, where Price is the shiny, wholesome son and Cunningham is the goofy, friendless buffoon with an over-active imagination.

Upon arrival, the eager disciples learn that Ugandans are much too burdened by a disease called AIDS and a local warlord threatening female circumcision to concern themselves with the story of Joseph Smith and the golden book.

Parker and Stone, along with Robert Lopez of Avenue Q fame, prove masters at manipulating the musical medium. It's a format they've dabbled in and screwed with before on both television and the big screen in South Park and Team America. 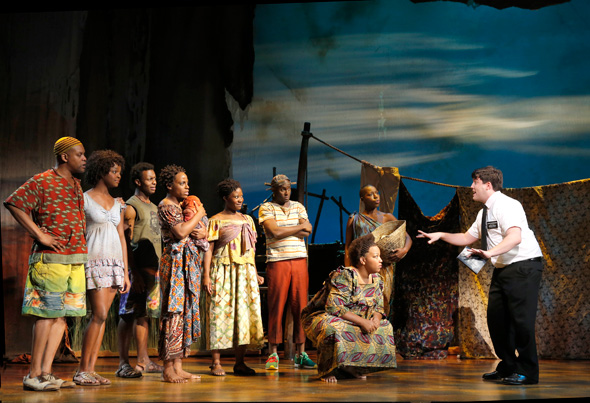 Here, there's no screen to hide behind. But they don't need it. The songs, full of stinging satire and lacking a PC filter, nail their target. It helps that they're supported by inspired choreography from Casey Nicholaw (who directed alongside Parker). There's a freshness to the steps buoyed by that Mormon get up and go energy.

The combination of musical theatre conventions and a no-holds-barred characterization of religious naivety and repression is the intersection that gives the musical liftoff. The numbers that penetrate most strike to the heart of Mormon contradictions â a chorus of missionaries praise the benefits of knowing how to "Turn It Off" when contentious thoughts boil to the surface (especially of the guy on guy variety), and the "Spooky Mormon Hell Dream," the real winner, plays on all-consuming guilt and features cameos from Jeffrey Dahmer and Johnnie Cochrane.

The Ugandan characters are sadly underdeveloped alongside their Mormon counterparts, although we are privy time and time again to a certain private problem one of the men is suffering. As an ensemble though their "Hasa Diga Eebowai," a phrase which, when translated, would make any Mormon faint, is the highlight of act one. Additionally, their holy theatre take on the Book of Mormon a la Cunningham, "Joseph Smith American Moses," is the triumphant moment towards which the musical builds.

Samantha Marie Ware makes Nabulungi a memorable character; even though it's problematic her difficult to pronounce name and her ignorance to metaphor become her defining traits. Evans and O'Neill are a strong pair, each exuding the qualities the other lacks. Cunningham specifically is a captivating comedian.

The musical is undeniably fun. It's undeniable...who wouldn't have fun? OK, maybe Mormons and Ugandans, but for everyone else, it's a contemporary, politically-infused satire by a team that's practically writing the book, their own book, on how it should be done.

The Book of Mormon, by Trey Parker, Robert Lopez and Matt Stone, runs at the Princess of Wales Theatre until June 9.