Say yes to Arigato, Tokyo at Buddies in Bad Times

Daniel MacIvor's Arigato, Tokyo teaches us that there are a number of ways to say "yes" in Japanese, many of which help the speaker avoid having to say no. In the theatre, like in the pathways of language, a play can be told in any number of ways. The most successful modes of storytelling are ultimately the ones that best serve the narrative.

Narrative and storytelling are firmly intertwined in MacIvor's newest play, a fresh and reflexive examination of love and the base appetites we satisfy on the way to giving ourselves over. While we're at once pulled into the mystery that frames the play, we're equally as enraptured by the artist at centre pursuing desire in a foreign land.

Carl Dewer (David Storch), a popular Western philosopher, travels from Vancouver to Tokyo for a series of speaking engagements. After roaming around the city for drugs and sex with his interpreter Nushi (Cara Gee), a visit to Noh theatre provokes an unexpected fascination with Yori (Michael Dufays), performer and brother of Nushi. Etta Waki (Tyson James), an escort, is something of a spiritual guide and storyteller. 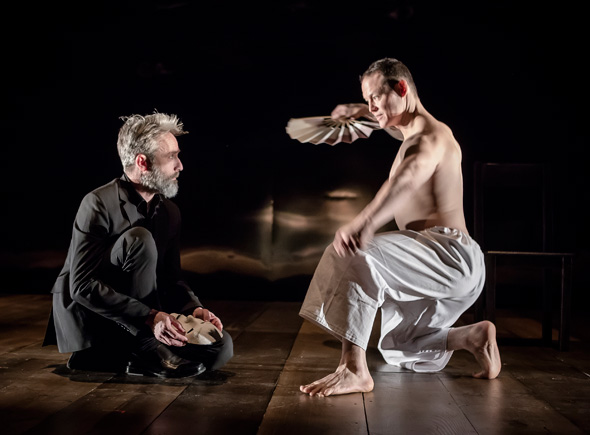 MacIvor has placed love at the centre of the play, but in an elevated way. What he avoids doing is leaning on popular tropes â blind love, a love quest, love triumphing over odds, etc. Instead, he revels in the ambiguity and messiness of the feelings love inspires. Carl's philosophical approach to love, that it lessens after sex with a new partner, is undermined just as quickly as what he's experienced is snuffed out.

The play is framed as a reading Carl gives to an audience, which acts as somewhat of a window on why and how writers reach their conclusions. There may be some autobiographical elements in MacIvor's piece and the concluding scene helps drives home the relationship between art and reality. If there is one aspect that needs more work, it's how the Etta Waki character functions as part storyteller, given we already have a writer to guide us.

Brendan Healy's staging oscillates between the overwhelming chaos of late-night Tokyo and the peaceful serenity of tea sessions and whispered conversations. The action strides confidently from scene to scene, but it's certainly more understated than his previous work. Healy is aided by a compartmentalized lighting design from Kimberly Purtell.

The performances match the energy of MacIvor's text. Storch carries the piece through its paces well as the ravenous hedonist. He expertly exudes a slimy kind of charm. But it's Gee who makes the strongest impression. In inhabiting all the complexities of love, her Nushi is the most interesting character to watch.

Arigato, Tokyo is a series of sexually-charged interactions that inspire bouts of poetic rumination. That action and reflection can be balanced in this way, through narrative and retelling, is a testament to the collaboration between MacIvor and Healy.

Arigato, Tokyo, written by Daniel MacIvor and directed by Brendan Healy, runs at Buddies in Bad Times Theatre until April 14.